What appears on Jamie's Phuket depends on what we do, where we go and how much of that precious time I have. I would love to blog full time and write something new and exciting every couple of days, but family comes first, and work takes up most of the week, so do bear with me. I hope that over the last 2 ½ years this blog has been of some help, the original aim, and still the aim - to show the real Phuket, not only the beaches and tourist hangouts. 2008 was a good year, and 2009 promises much. So let's look back at what was blogged last year...

In January, my favourite Phad Thai shop was blogged.. and this little roadside local shop has now made the Lonely Planet! Thai food is great, but I admit to being English, and sometimes need some English Food too... I have a vague aim to blog all Phuket Temples... 2 were added in January - Kata Temple (on the back road near Kata Beach) and Wat Naka (near Phuket Town).

February - a rare treat at a very nice restaurant called The Ninth Floor in Patong, not our normal kind of place, it was a company dinner. Great food... Next up - a visit to Chalong Temple Fair (which has also been on for the last 10 days).

The floating restaurant at Bang Rong on the east coast of Phuket was blogged - one of our favourite quite places... as is Buddha Mountain, where the Big Buddha is slowly nearing completion. We wrote our names on a piece of marble which I assume is now part of the statue... March - we visited the Weekend Market which is near the aforementioned Naka Temple on the edge of Phuket Town. We also visited the Phuket Food Festival held at Sapan Hin in the south of town. There was a little piece about Phuket Weather, although for much more information on the weather, then my Phuket Weather Blog is the place to look.

I was making a point to blog different parts of Phuket Town during 2008. In April I headed to Sapan Hin for a look around... And then... highlight of April has to be Songkran! I have learned over the years that you have to be in a Songkran mood to enjoy the day. So we enjoyed it! Phuket has more bloggers you know! In April there was an honorable mention for the Phuket Bloggers - if there are more, do let me know!

May - we left Phuket for a while - holidays! My wifes family is in Chumphon, on the east coast about 400km from Phuket. Further up the coast is the very nice little town of Prachuap Khiri Khan, which I enjoyed visiting. Must blog Chumphon one day too!

Back in Phuket we enjoyed the views from Rang Hill... and found a great restaurant on the north side of Phuket Town - Pak Nam Seafood. June - meant to be low season but of course the weather is mostly nice. A couple of places to mingle and exercise with the locals - Bang Wad Reservoir and Suan Luang Park. Phuket is trying to head more up market. Yes, it's got a lot of package tourists, but the luxury market is expanding... Nothing left for the budget traveler? Wrong! I wrote a little something about Phuket for Backpackers.

July - we started with another little local temple - Wat Thepnimit (which is just outside town), and later in the month I blogged Wat Sawang Arom, which is close to Rawai Beach. Also at Rawai Beach... Nikitas Bar is a Phuket legend. On the beach, small and friendly, good prices. We like!

In July, using TripAdvisor as a guide, I wrote about the Top 10 Hotels in Phuket - this page has become one of the most visited on the blog.

August. At the end of August, Phuket Airport was closed for a day and a half by the PAD. We did not think at the time that the same idiots would do the same in Bangkok. It was a very confusing few days at the end of the month. I tried to do a kind of "live blog" with updates for a few days.

Earlier in the month, the Big Chicken restaurant was blogged - and we have just been there this very evening!

I also took some time to look around Kata Noi Beach. 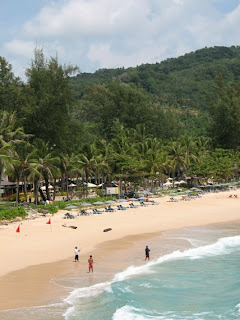 Our kids love the Phuket Butterfly Garden - we've been a few times. It's on the edge of Phuket Town. 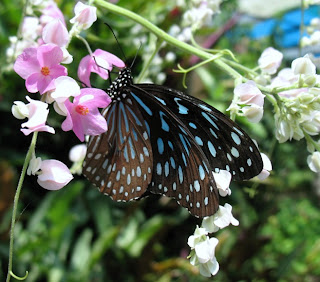 September 2008. The year seems almost done... Now and then I add a recommendation for a Phuket Hotel. So in September I added Burasari and Katathani.

I finally blogged something about the Similan Islands, which really was the reason I stayed in Phuket. Great diving.

And then... my absolute favourite Phuket festival started at the end of September. This is something unmissable, something totally unique. The Phuket Vegetarian Festival. Every year I try to see something new, I started with the food... 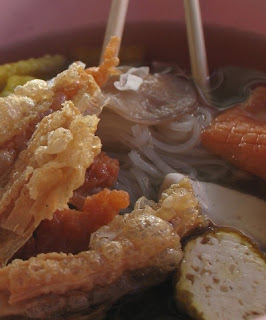 And into October... the Vegetarian Festival is awesome. If you can be in Phuket at the right time, BE HERE! You cannot see anything like this anywhere. I was in blog overdrive for a week... 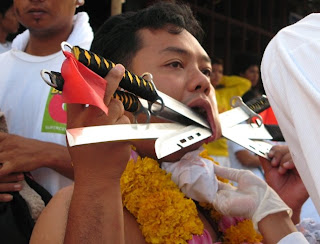 The firecrackers when the procession left Kathu village were earbursting. This is an experience... 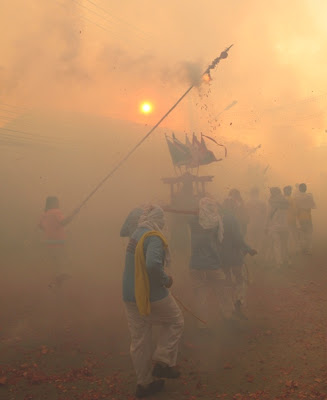 And I took more photos of the Vegetarian Festival in Phuket Town. I love it! I also posted some videos of the festival... 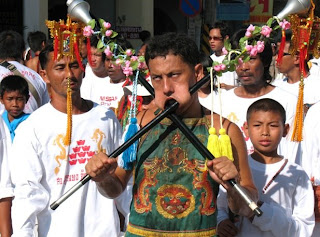 As if October could not get any better.... we flew to Phi Phi. Yes, flew to Phi Phi. There are seaplane flights with a company called Destination Air, and I was asked to write something for them. No payment but at the last minute I was able to get the whole family along for the ride. A great afternoon. 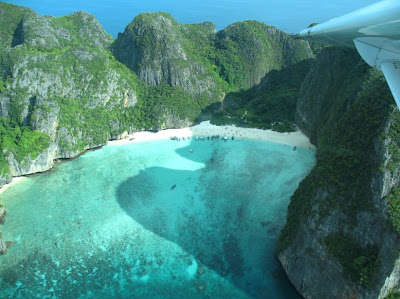 November - into the high season for us divers... I took some videos at Phuket Aquarium, praised the abundance of Fruit Stalls, and we celebrated Loy Krathong ... 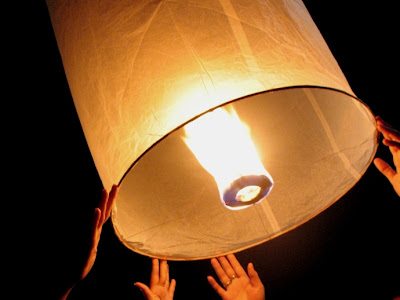 I took my daughter to school - well, an old school which has been turned into a museum in Phuket Town - Thai Hua Museum... and on the edge of town, not far from our house, we found a great new noodle shop specialising in Kuay Jap style noodles. 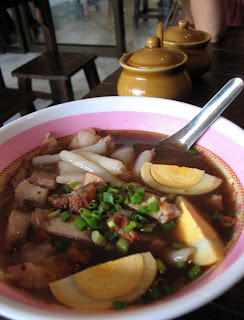 I have learned something - there are always new adventures to be had, new places to explore close to your own doorstep. It's too easy to turn on the TV, easy to eat at your favourite restaurant, and I am guilty of this too. I thank this blog for making me get off my sofa. Phuket is a great place, but is often rather misunderstood. I love it here, and have no plans to leave.

December - I admit to being far too busy to write much save for some stuff about high season weather in Phuket and a review of the very nice Amari Coral Beach Resort.

The end of December marked a turning point. It has now been more than 4 years since the tsunami... What did I write? Fear not for the future, weep not for the past. Bring on 2009. It has already been brought. Hope January has been good for you. Hope the next 11 months are good too. Keep reading Jamie's Phuket!