I've not had too many run-ins with snakes in the many years I've been living in Phuket. Never seen a really huge one except at Phuket Zoo.. oh and I have seen banded sea snakes many times while diving in the Similan Islands - they are really venomous but totally ignore divers. Snakes are a fact of life here. Our house is close to a big tree-covered hill, not in the middle of town, so we do expect a snake now and then. A couple of years ago, we'd get one every week, but normally just small things. A couple of baby cobras... which makes you think "where's mama cobra?" We have had hardly any in the last few years - we have always had cats and recently had a couple of stray dogs who liked to hang around our house to get food ... which I think is enough to deter snakes.

My wife called me at work one time saying she'd seen a big one in the garden but it had slithered away, then she saw it hanging on a tree next to our house. We do worry about snakes since we have 2 kids. She was worried this one would come back - and it did! I saw it hanging on the gate a couple of days later - about 3 feet long, green colour, and aggressive. It really did not like being hit with a spade. Liked it even less on the second hit. Well, I'm not a killer, but I'm not a vegetarian either and don't want a poisonous snake near my kids!

If we do see snakes around the house there's not always time for a photo. Here's a few pictures from over the years ... 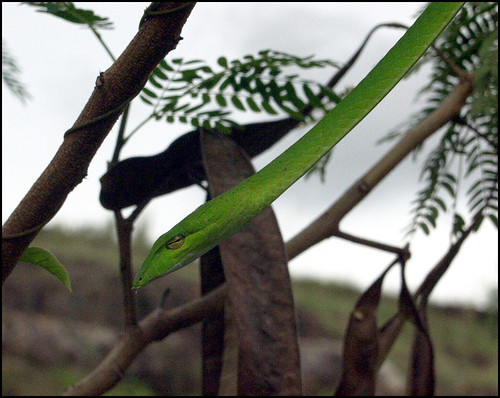 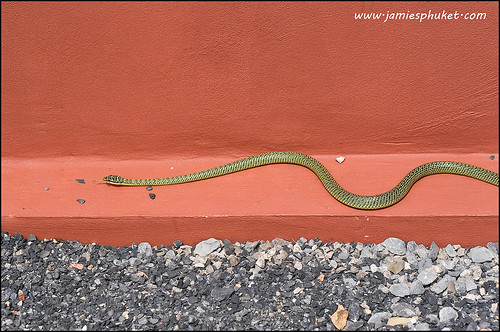 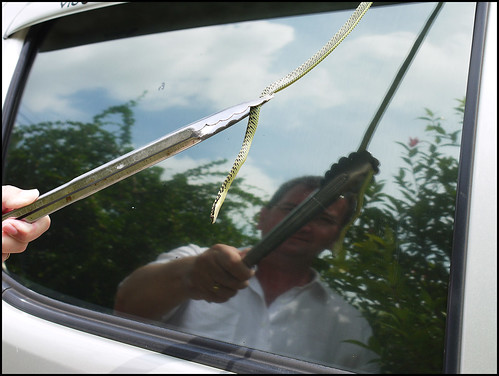 (above) Golden Tree Snake in our garden and another photo of me gently removing one from our truck! These tree snakes/whipsnakes are not really dangerous. They do have venom and I guess you don't want to be bitten, but they're not going to cause an adult human any problems. The tree snakes can move really fast - blink and they can vanish into trees or bushes. I was once doing some gardening and a tree snake "flew" out of a tree right onto me! Momentary panic until I saw what it was. 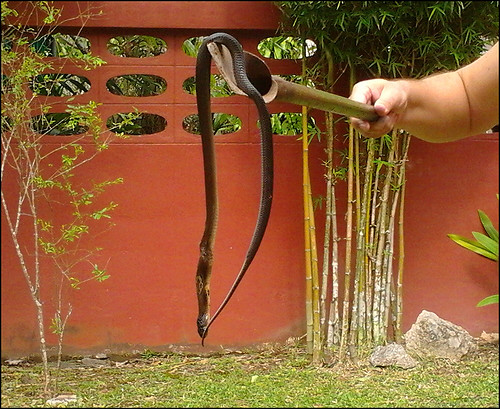 (above) a no-longer-alive Monocled Cobra. We have had a few of these in our garden. The biggest over a meter long. Any bigger and I'd be calling the snake catchers for sure. Nasty snake. Very venomous. I make no apology for killing this one. 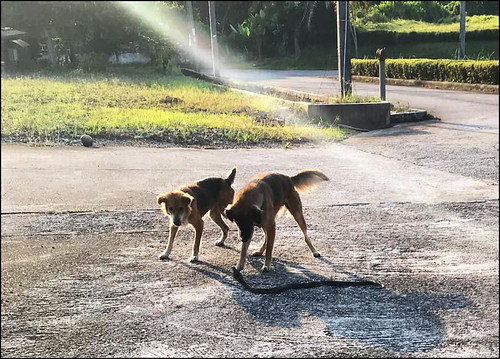 (above) On our street .. 2 dogs fighting a monocled cobra!

And sometimes (as photo below) it's better to call the snake catchers! This one was about 3 meters long, my wife was home and thought it was a cobra. Turned out to be a really big rat snake (non venomous but can still give a nasty bite). If I saw a snake this big I'd do the same as my wife - not trying to tackle that on my own! 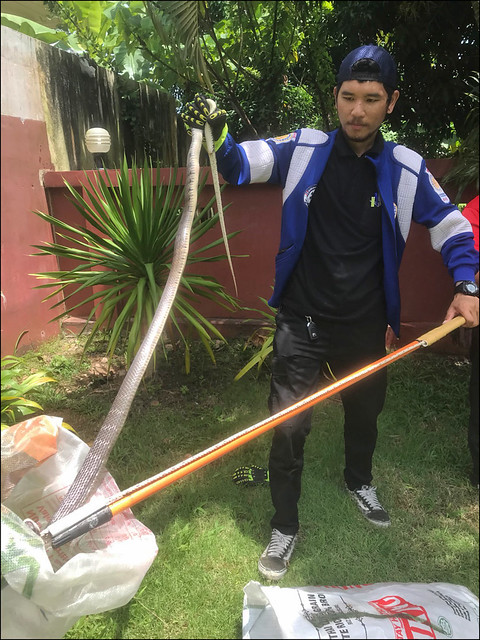 I found a great website several years ago about snakes in Thailand - www.thailandsnakes.com - anything you want to know about snakes in Thailand is here - lots of pictures, some videos, explanations of which snakes are venomous / dangerous. Here in Phuket if you did see a really big one, call the police and they call the local snake catcher. Normally big ones are released back into the wild. I admit that I prefer to whack with a spade first, ask questions later. So I have been reading the snakes in Thailand website quite a lot in order to recognise some of the real nasty ones like the Malayan Pit Viper. Never seen one, don't want to!

Snake information about the snakes pictured above :

Oh and a cool video about catching snakes ...


You have been reading : Snakes in Phuket