** If you somehow stumble on this page, it has updates from 2008 when some protesters shut down Phuket Airport for a while. I say again, 2008. It's an old story. I don't post things on the blog like news stories any more. If you want latest news and weather you can follow me on Twitter. Now ... Best to head back to the Phuket Blog Home Page!

I can't quite get my head around the idea that Samak has to quit because he hosted an early morning cooking show on TV... but that seems to be the story..

Now looks like new elections might happen sometime soon. And I hate to be the bearer of bad news for the PAD, but the same people are likely to win again unless the suave Democrats, led by the sauve Abhisit Vejjajiva who was born in England and went to Oxford University... and if I might suggest, is thus not quite trusted by the rural Thais, who like 'em home bred and not so white and clever.

Anyway, aside from the weather, not much happening in Phuket! Certainly no troubles or problems, so get here NOW and check out the deals on Agoda.com!

Rumours spread yesterday that PM Samak would quit today. He did not of course. Not sure what can end the stalemate.

Anyway, Phuket is 100% normal. No problems. Everything well. Daily life continues as normal after the silly airport "siege" at the weekend. Don't think anyone round here will be dumb enough to try that again...

So, maybe I can get back to some normal blogging?? :)

PS - the weather is lovely - see the Phuket Weather Blog

Even in Bangkok, the tourists are saying "What Crisis?" - see article in the Sydney Morning Herald.

There was a march in Phuket town yesterday with an estimated 1000 people taking part. The airport is very very unlikely to close again, as the local PAD seem to have realised (belatedly) that such action is the same as shooting themselves in the foot. Yesterdays march and occupation of Phuket Provincial Hall was totally peaceful.

According to The Nation online breaking news: "Supporters of the People's Alliance for Democracy have seized the Phuket provincial hall, Sondhi Limthongkul, a PAD leader, told the protesters at Government House at 12:20 pm."

To people on the spot, it looked more like a peaceful picnic in the park. And so it remained, until clouds burst over the crowd at 8.35pm, dampening the protest.. 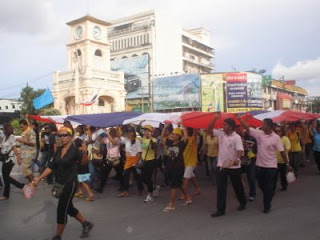 State of Emergency Declared in Bangkok

Well, it all went off last night it seems with rival groups fighting in the streets. So the government finally had enough and declared martial law. Now people, back off and be sensible about this.

Phuket is Peaceful and Safe

Ok, listen, I live here with my family. I have 2 kids. In Phuket, daily life is unchanged except all the TV's are tuned to the news channels instead of the soaps. There's nothing to worry about here.

Anyways, if you worry about travel - get some travel insurance!... Click below:

Top level talks took place today at Phuket Provincial Hall amid concerns that the protests at Phuket International Airport could be renewed.

The declaration of a state of emergency this morning in Bangkok and union action calling for the resignation of Prime Minster Samak Sunthoravaj took tension to a new level in Thailand.

But Phuket remained peaceful, and looked like staying that way.

Phuket Airport General Manager Wicha Nurnlop told news sources that he had informed Governor Niran of the need to protect the airport.

Wing Commander Wicha said there was no immediate threat of a repetition of the weekend's three-day blockade.

Travellers were arriving and departing without problems. There was no protest outside the airport.

The Chief of Phuket Police, Major General Apirak Hongtong, said there were no immediate concerns on Phuket and all precautions were being taken.

Leaders of the main protest group, the People's Alliance for Democracy, have been told by the Phuket tourism and business community to keep their protests low-key and not damage the island's peaceful image.

Today is a normal day here. My kids are at school, I am at work, my wife has gone to pay our tax and social insurance. See you soon!

Touchdown! First flight after the "siege" has landed. The first flight to arrive was Thai Airways TG213 from Bangkok, which touched down in Phuket not long after 3.30pm.

If anything untoward happens, I'll post here, but lets hope all the silliness has ended now and everyone can get to Phuket and enjoy their holidays or get home!

Final comment from a local website which has been reporting this blow by blow... "Before Friday's action, the PAD had the support of the vast majority of people on Phuket. And now? Well, anyone who depends on the tourism industry for a living would have to wonder. Tourists don't play politics, so it's best not to play politics with tourists."

All airlines contacted. First flight out will be 4:20pm.

The blockade of Phuket International Airport is over, and now the cost is being counted.

Phuket's air siege lifted when leaders of the Peoples' Alliance for Democracy met Sunday morning and decided to stop the protest that brought a halt to all flights in and out of the island from Friday.

Soon after, airport General Manager Wing Commander Wicha Nurnlop called all 11 airlines and told them the airport was open, and that flights could resume as soon as possible.

The first outbound flight will be Thai Airways TG214, due to leave Phuket for Bangkok at 4.20pm.

Inbound, the first flight to arrive will be TG213, which leaves Bangkok at 2.10pm and arrives on Phuket at 3.30pm.

If you are a tourist travelling to Phuket or trying to leave the island, check with your airline direct for information about rescheduled flights.

The airport will have to cope with a backlog of travellers. Airport officials were meeting with the island's tourism industry leaders at the airport early this afternoon to plan a ''strategic airlift'' to relieve the backlog of stranded tourists.

As many as 20,000 people could have been delayed on the island unwillingly, but many have probably already made their escape by bus to Bangkok.

And thank you to local news websites for all the updates.

The protests continue in Bangkok.

Right, now I can get back to blogging about all the nice things in Phuket!

I would not normally post breaking news, but things are happening here in Phuket and in Bangkok that need to be mentioned. There will be no dicussion of who is right or wrong. It's not my place to comment. I heard shouts on the TV this evening of "Ock Bai" which basically means "Get Out". Similar shouts were heard nearly 2 years ago...

Samak still refuses to step down, but I just heard on the BBC news that the army chief has "suggested" that Samak should step down. Reports in the Thai papers say that a large pro-government group is gathering in Bangkok. One hopes the pro's and the anti's don't start any argy bargy.

Well, a lovely sunny day here. I have "caught the sun". Nice. But not nice if you are supposed to be flying in or out of Phuket today. This is going to make a few people rather annoyed. Krabi airport is also closed.

"NO NEW deadline for resumption of flights from Phuket International Airport has been set after officials cancelled advice that a return to the air might be possible from 6am Sunday.

The prospect of no timetable for a return home left some tourists low on cash at the airport, being fed bowls of rice by airport staff."

There was a long discussion on the Thai Visa forum (which is mostly moaning expats, but there can be useful information there too!)

Phuket Gazette, shame on you. No news since yesterday. Come on, this is NEWS, or does nobody work at the weekend??

Meanwhile, protests continue in Bangkok. The BBC website reports that Samak met the King and refuses to resign. Actually he was elected, so he does have a point. As a farang I should not step into politics, but I just want to say... a group calling itself the People's Alliance for Democracy is trying to bring down an elected government by mob rule. Great.

Bangkok is set for another day of protests. Phuket Airport will be open sometime later today. According the excellent coverage in local news one flight left last night carrying stranded tourists back to Bangkok, and the airport's general manager is quoted as saying there will be no flights until at least noon.

11:30pm and the speeches continue in Bangkok at the PAD rally. The army chief is reported to have refused to impose a state of emergency. No need for it really. The army certainly does not want a coup. The talking continues. Prime Minister is probably sleeping, I would if I was him. Deal with this in the morning. Good night!

10pm - photos of tonights / todays protests were on the AP Website

8:47pm and now there are speeches again, with people coughing from the tear gas... no the speeches are outside Government house, while the teargas was fired outside the police HQ.

8:33pm I am watching channel ASTV 1 - it looks kinda scary to me. Lots of tear gas, lots of shouting

NOW! 8:23pm I am watching tear gas being fired RIGHT NOW on TV... A minute ago there was a concert, singing.. now things look a whole lot worse...

The "PAD" - People's Alliance for Democracy - has rallied in Phuket and closed the airport. Latest estimates say there are TEN THOUSAND protestors at the airport. And this is peanuts compared to Bangkok. Krabi and Hat Yai airports have also been closed. This is direct action in large numbers. Stay tuned.

So far no injuries here in Phuket, but I just saw on the news that police had fired tear gas at people in Bangkok about 1 hour ago.

The BBC News has the latest too. (Well of course they do!)

BBC also has analysis on WHY this is happening...

The meeting was called to discuss what action should be taken about today’s protest, which has stopped all flights in and out of the airport and crippled Phuket’s tourism industry.

The meeting, being held at Phuket International Airport, is closed to reporters.

PHUKET AIRPORT: At about 4:45 pm today, People’s Alliance for Democracy (PAD) protesters breached the main gate at Phuket International Airport, made their way into the main terminal and smashed the windows of the VIP lounge.

Several hundred protesters stormed the runways and airport officials have ordered a halt to all air traffic.

Police have been called in from around the island to supervise the anti-government rally, which had swelled to an estimated 10,000 protesters by 3:30 pm.

The THAI Airways Union has allowed their 15,000 staffers to stop work to show their support for the protest.

Earlier, at about 2:30 pm, the protesters used vehicles to block road access to the airport.

Tourists with outbound flights to catch have been forced to walk several kilometers with their luggage, then clamber over a two-meter spiked security fence.

Some arriving passengers have been seen walking down Mai Khao Beach in a desperate bid to get out of the area without crossing the PAD protesters.

A growing number of passengers are now trapped inside the airport and the only movement seems to be though a back door at the airport’s staff housing complex.

Just before posting this news online, the Gazette received reports that about 1,000 protesters had marched to the PIA Director’s Office Building, just north of the main parking lot, and some 400 protesters breached the gate at the main entrance and were now heading to the airport, where the scene has been described as “chaos”.


You have been reading : Phuket Airport Closed by Anti-Government Protesters