Yes, it's another trip just over the bridge from Phuket into Phang Nga province. We have done lots of exploring in our neighbouring province, which is about 8 times the area of Phuket and, in general, much quieter, more rural and with way less tourism. For sure there are some popular places like the Similan Islands, James Bond Island and there are lots of hotels in Khao Lak, but Phang Nga is mostly green and peaceful with quiet roads and beautiful scenery.

Back in August 2015 we explored down some quiet roads just over the bridge and to the east, in an area called "Klong Kian". A very nice day out discovering a new area so close to Phuket. Early in 2016 I saw photos taken from a new viewpoint in that area, so we went again and found Samet Nangshe Viewpoint, which I'd classify as a "must see"! A couple of months ago my wife and a friend and our kids went up the same road to the viewpoint and found that a new restaurant had been built in the mangroves at a village called Hin Rom, which we'd visited in 2015, but the restaurant was not there at that time. My wife also noticed that there were boat tours on offer, so our little plan for this day was lunch and a boat trip to some islands we'd never visited before.

From our house near Phuket Town it took a bit more than an hour to reach the village of Hin Rom. Nothing special at the village, just a (rather dirty) fishing village, but it seems they have a new village co-operative running the restaurant and tours from the village. The final stretch of "road" down to the restaurant and boat jetty is a bit dodgy! 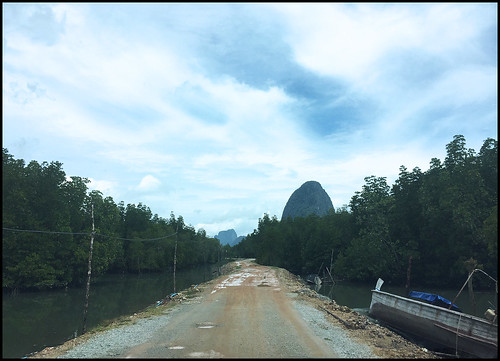 We were surprised to find other people already there, but it was a Saturday. I thought this place was our secret! First stop was lunch. There is a simple looking restaurant there, but my wife told me the food was very good last time. One group of about 10 was already there and a German family appeared too - they were staying at a small homestay right by the restaurant. We ordered food and I wandered off to take a few photos before our trip. 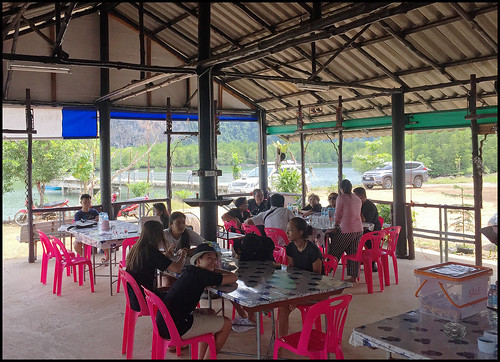 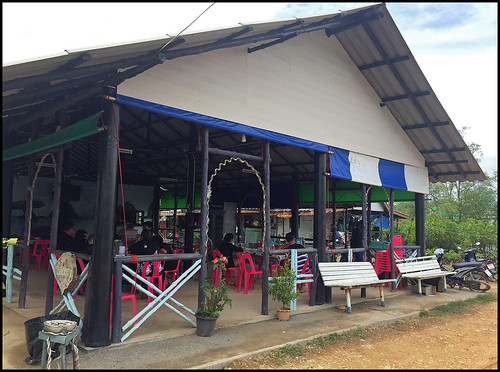 (above) Restaurant at Hin Rom

(above) Boats at Hin Rom jetty with a view out to sea. Quite a few boats there, and I wondered how many visitors they would get, given that the boat trip idea is very new. As I sat in the restaurant again, 5 brand new jeeps arrived full of tourists (they looked Scandinavian). Seems that a tour company has made contact, and has money to burn on new cars too! 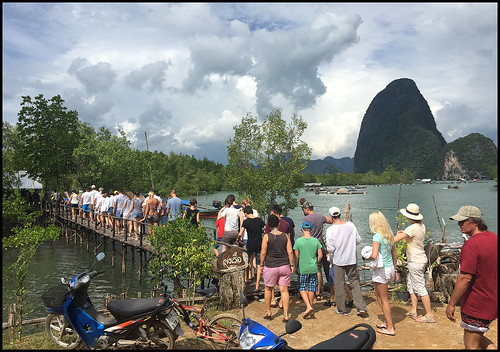 We let them all go before us. We did not see them out on the water. Our food took quite a long time to appear, as they had only 1 cook working, but the food was certainly good. Very fresh seafood. While we waited we checked out the various options for boat trips. They offered a bunch of different islands and caves. You can do James Bond Island and Panyee village from there, although it's a bit far - better to do these well known sites from other starting points. We've done it a few times, you can read more here or here. The boat prices we thought were a little high, but the guy was up for negotiation and we settled on 3 different islands including some caves for 2000 Baht. My friends with the Easy Day Thailand tour company are offering a new tour in this area, probably combining a boat trip with some other nearby attractions to make a full day. The islands we chose were all new to us. There are so many islands in the bay .. I would love to have my own boat and explore all of them. 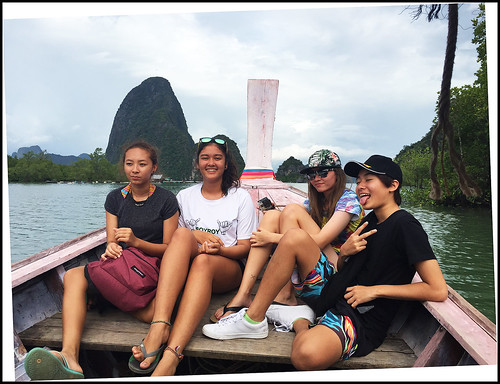 (above) And we're off ... my daughter and her friends on the longtail boat heading out from Hin Rom. 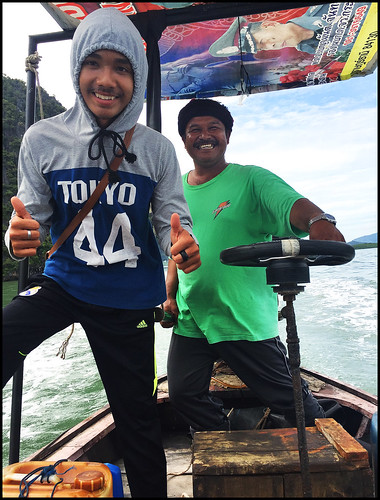 (above) And our longtail boat crew were very friendly!

So, the first stop was a cave. The island is called "Koh Sa Ang" according to the locals. It's marked as "Koh Sawang Yai" on Google Maps. There were photos of a cave next to the restaurant, and I was not expecting too much, but actually this was quite an impressive cave. The longtail boys said they had only found it recently, not sure if that's true. A sign outside said "flamingo cave". I can't seem to find any mention of it on the web, so maybe this is true and it's only been found recently. Some wooden ladders have been built to get into the entrance a few meters above the sea. You have to climb out of the longtail onto the rocks and up a few wooden rungs. 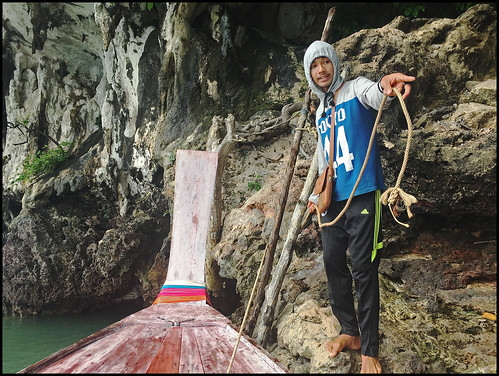 (above) Getting the boat tied up outside the cave at Sa Ang island.

We were the only people at the cave and I was happy that we were all given head torches to wear, which did indicate that there would be some darkness up ahead! Here we all are ready to explore the cave ... 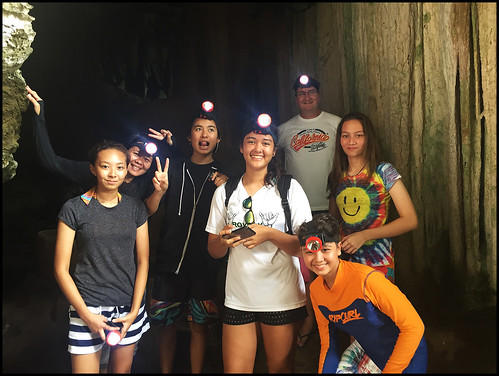 And it was impressive! The photo below shows the outer chamber, just inside the entrance, with enough natural light for a photo, even with a phone camera. 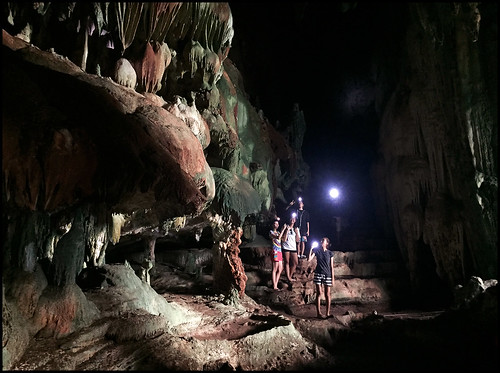 Having been prepared for something underwhelming, this was a nice surprise. Aside from the size of the cave, there were lots of interesting and beautiful limestone formations - stalactites and stalagmites, plus rimstone dams which are like natural bowls forming stairs down steep slopes. You can see this behind the kids in the photo above. The torches were needed as we ducked through a very low passage into another large chamber behind the first. It was warm in there, and we were all sweating by the time we came out. Some beautiful limestone formations, but very hard to get a photo with a headtorch and an iphone! One of the formations did look a bit like a flamingo. We were all pretty impressed by flamingo cave!

In between the islands, our longtail boat chugged along in the way that only longtail boats can. The view in the Phang Nga Bay area is always good, no matter where you look. A little video below with a few scenery shots from our boat. I really must remember to take more video!

From the flamingo cave we longtailed a little south to Koh Hong. We could only pass by (slowly), as the lagoon here is roped off - no boats allowed. This is a place to visit on a canoe trip. A boat was there from John Gray Sea Canoe and many people were paddling around the sheer cliffs of the island. Up to now we've not done a canoe tour, but it's on the list! 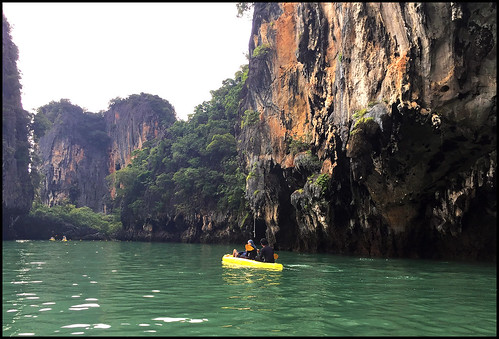 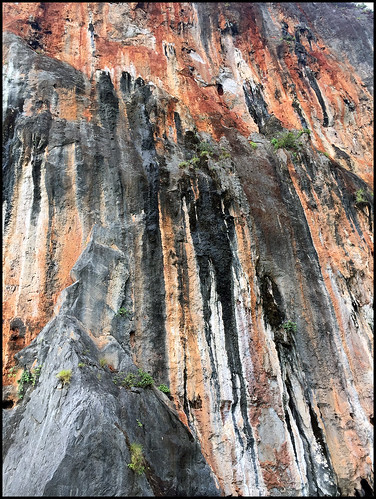 (above) Canoe and rock walls at Koh Hong .. Note : there's another island called Koh Hong further south and closer to Krabi, which we visited earlier this year while on a trip to Koh Yao Yai island.

Next stop was another cave! These limestone islands are full of caves. The island (according to Google Maps) is called Koh La Na. The entrance to the cave is at the north of the island. The longtail boat headed into a dark hole and we landed on a small beach inside the cave maybe 15 meters inside the island. It was a bit smelly at first. I believe this is normal in some limestone caves. The cave, they said, is called Tham Kaew, meaning glass cave, apparently due to all the shiny wet limestone inside. We donned headtorches again to look around ... 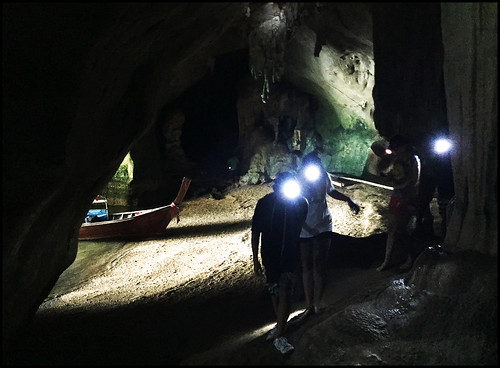 (above) Tham Kaew Cave - another quite spectacular little place and again, hard to take a photo in the dark! 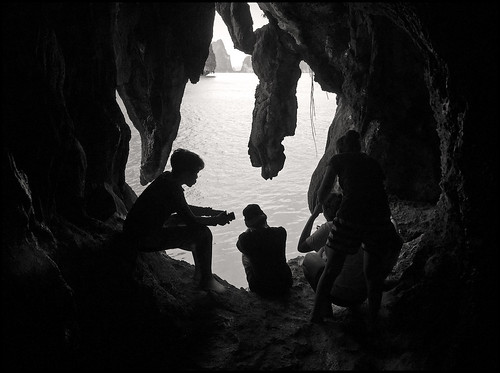 (above) The kids found a cool spot to hang out. We do like to explore and do trips with our kids. They seem to enjoy it most of the time!

After a boat ride and a couple of caves, the question from the kids was "where can we swim?" And the answer was the next island, just north of Tham Kaew Cave. This island is called Koh Chao Talay Tai, which means "island of the people of the southern seas". There was a small beach. When we arrived, another longtail with a couple of tourists was just about leaving, so we had the place to ourselves for a while and hung out here for about half an hour. Kids went for their swim ... 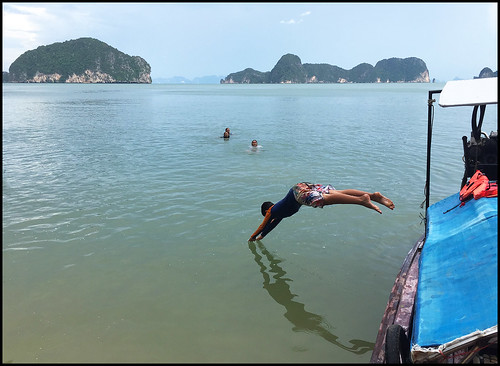 A little beach just for us. For 30 minutes we were Lords of all we surveyed :) 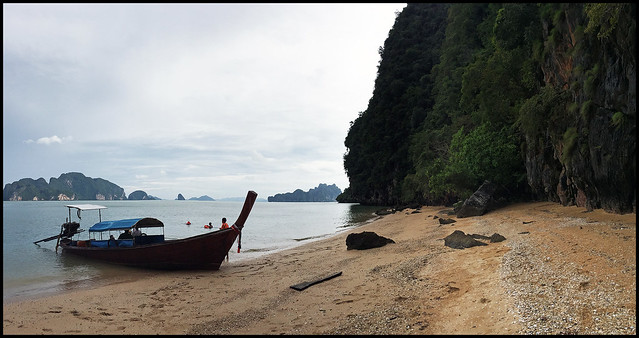 And we found a guitar on the beach. Sort of. I was tempted to bring this lump of driftwood home. 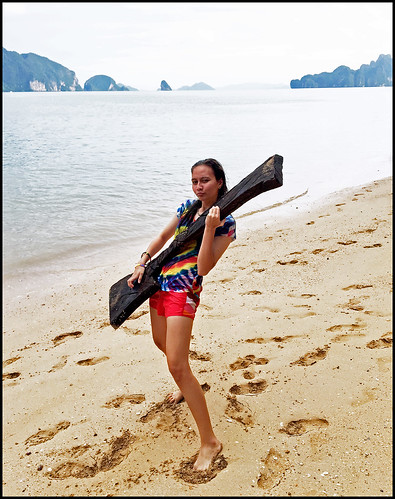 Time to head home! The boat trip with cave visits and the beach stop was a little over 2 hours. I think very good value for our group of 7. A very nice afternoon. Phang Nga Bay is a huge area, and even with all our exploring there is more to see. Can I sell my house and live on a boat? We were back at the little restaurant before 5pm, grabbed a couple of cold Cokes (should have taken some water on the boat, we were thirsty!) and drove home. We even got a nice sunset through the rubber trees. Another fun day exploring new places. After so many years, I am always happy on days like this. Happy to find something new. Happy to see everyone happy! 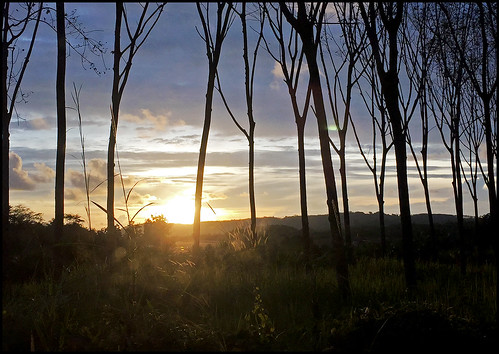 Other places to visit in the area (Phang Nga)

A trip like this one with some canoeing included too can be booked with my friends at Easy Day Thailand.

You have been reading : Exploring more islands in Phang Nga Bay