Back in 1999 when I first arrived in Thailand, Phuket airport was considerably smaller and quieter than it is now. Although Phuket was already a very popular tourist destination, and had been steadily growing since the 1980s, the airport had way less flights and way less arrivals and departures compared to now. I'm not quite sure where the figures come from, but the Wikipedia page on Phuket International Airport has lists of passenger movements and flight movements. Back in 1999, the total passenger volume was about 3 million. This had increased to nearly 5 million by 2004, but dropped back to just over 3 million in 2005 (due to the tsunami on 26th December 2004). But by 2007, passenger volume was up to well over 5 million and it's been increasing ever since. The 2017 figure was over 16 million, with over half from international flights.

Phuket airport was overstretched and getting rather outdated with just 1 terminal until the new international terminal opened in September 2016. I flew to the UK that September, out of the old terminal and back into the new one. Wow, a huge difference! Suddenly Phuket airport looked modern! The only issue seemed to be (and this continues to be an occasional issue) the lack on enough staff at immigration. There can be long queues sometimes .. with millions of people flying into Thailand through Phuket .. there can never be enough staff! But at least the airport is bigger and more modern now. With the opening of the international terminal, the domestic terminal had 18 months of renovations that finished in June 2018. 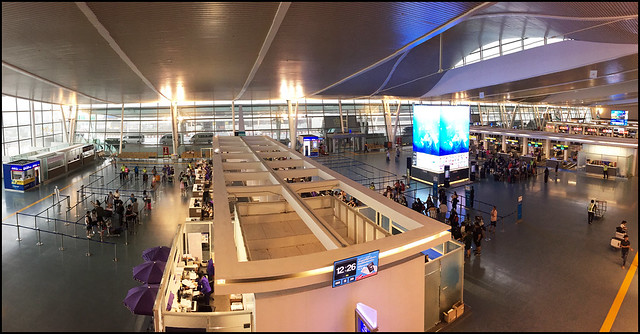 (above) Inside the new International terminal

This is something that many people don't realise. I know many people arrive at the airport and expect to be a short taxi ride from their hotel. Customers heading to the dive shop where I worked at Karon beach were surprised that the taxi can take 90 minutes. Phuket is bigger than you may realise. The island has an area of over 500 square kilometers and the airport is way up in the north of Phuket. From the airport to the main beaches on the southwest coast is a ride of 40 - 50km and at busy times, traffic in Phuket can be a bit slow! Sure if you choose a hotel at Nai Yang or Mai Khao beaches you are way closer to the airport (but further from the main tourism / nightlife / shopping centers). The runway starts right by the south end of Mai Khao beach, which means you can watch planes taking off or landing from the beach :) 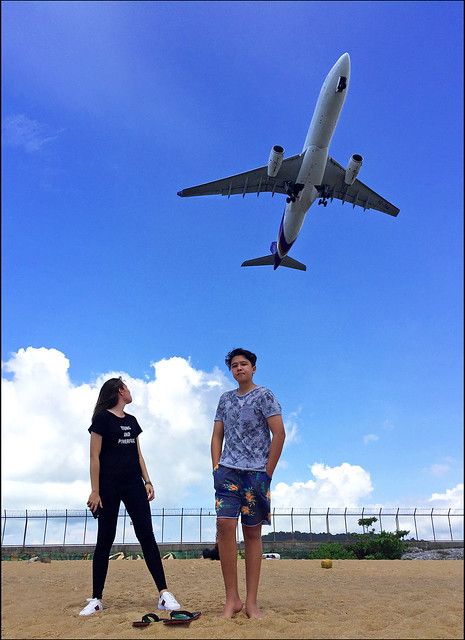 Getting To Your Accommodation

There are plenty of taxi options from the airport to hotels anywhere on Phuket island or north to Khao Lak. My suggestion - pre-book an airport transfer. So nice after a flight to see a taxi driver holding up your name and head straight to the hotel without having to worry about arranging anything on arrival. My friends at Easy Day provide a very good airport transfer service either from the airport or back to the airport. Their rate is around 1000 Baht one way or 1600 Baht for return transfer. That's a fixed rate for any hotel, so a very good deal for hotels further away from the airport! If you book a taxi on arrival from a desk at the arrivals area it might work out a few Baht cheaper to some areas in Phuket. BUT getting back to the airport is trickier. If you get a taxi from outside your hotel for sure the asking rate will be more than you paid to get to the hotel. So that deal offered by Easy Day is a good one! 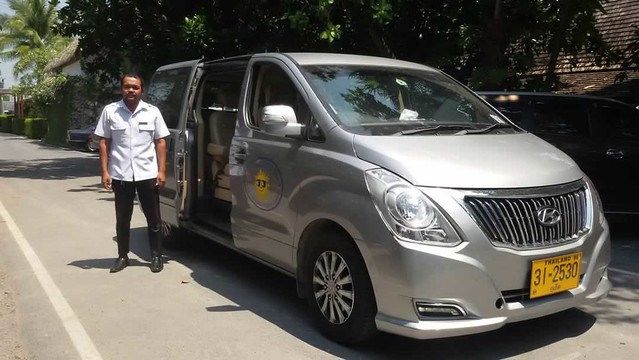 There is a lower budget option - a shared minibus service. Normally about 200 Baht per person and will depart when full .. then take longer to get anywhere as you're dropping people off all over the place and I do hear these cheap options try to make extra money by dropping everyone at tour agencies along the way. If you are a single, low budget traveler, this may be the way for you.

OR how about hiring a car? Many major rental agencies have services at the airport (Budget, Hertz, Avis for example). You can rent a car for about 1000 Baht per day. Good if you want to explore larger areas and not just stay by the beach and take a few organised tours. I know the traffic can be a little nuts, but if you are an independent tourist, consider renting a car. Be sure to have an international license.br />

The IATA airport code for Phuket is HKT. Not PHU (that is Phu Quoc in Vietnam) or PHK (if you book to go there you will end up in Pahokee, Florida!) PHT? That's for Paris. Not in France. The less famous Paris, Tennessee. And PHK? That's the airport of Port Keats or Wadeye in the Northern Territory of Australia! So, be sure if you are flying to Phuket to search for HKT!

Something will need to be done here in Phuket .. the numbers can't keep rising forever, but already the airport is a bit too busy even with 2 terminals. There is no space for a second runway in between the sea and the hills, but .. plans are afoot to maybe build a second airport a little north of Phuket island in Phang Nga province - see news here. Now I think the idea is that this would serve Khao Lak .. hard to see how to get everyone on the right flights. If that new airport got built it could be a 2 and a half hour drive to the south of Phuket, so things would need to be managed very carefully. Let's see what happens ... 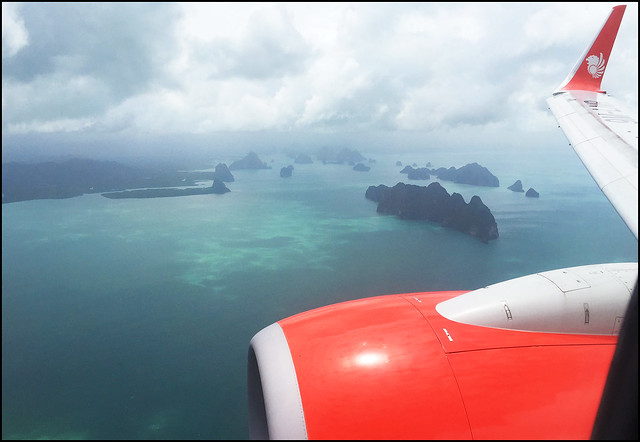 You have been reading : Phuket Airport Information