Yesterday (18th October 2008) was a very good day! We did something that we had not planned on doing.. in fact we had planned a day up to Khao Lak, but we got something a bit special instead. I had been contacted by a company called Destination Air the week before about maybe taking a ride on one of their seaplanes and writing about it here on Jamie's Phuket. Yes, sure! This week I decided to be very cheeky and asked if there were 4 seats available so I could go with my wife and kids. On Friday afternoon we got confirmation that a flight was heading to Phi Phi Island at 3pm on Saturday.. and they managed to find a seat for my sister in law too :)

I had been recommending Destination Air to people for some time. Yeh, I know you can get to Phi Phi quite cheaply by ferry, but damn! A flight to Phi Phi? There are still many people who don't know the option even exists, and yes, it's not exactly super cheap - current price is 4,999 Baht per person. But this is more than just transport, this is an experience too, and if you have limited time, or arrive in Phuket at the wrong time for the ferry, a flight to Phi Phi is a great option. From Phuket Airport to your hotel on Phi Phi in about 25 minutes. And when I say it's not cheap, I guess that's the backpacker in me talking. It's 100 Euro, it saves hours of travel time, and this is one of those "picture is worth 1000 words" moments. This is something I had wanted to do for ages, so thanks to Destination Air for the experience, and thanks to pilot Gerry and the crew. The whole family enjoyed a great day!

If you want to get to Phi Phi in style, I hope the following photos and mini videos will give an idea of what you can expect on a flight to Phi Phi! After meeting at the Destination Air office at Phuket Airport, we had time to buy the kids a donut before boarding. This was not a 747, not even close! We were shuttled over to our little plane by minibus and waited as customers bags were loaded. The plane seated just 9 people (plus a "copilot" seat). It was not big! 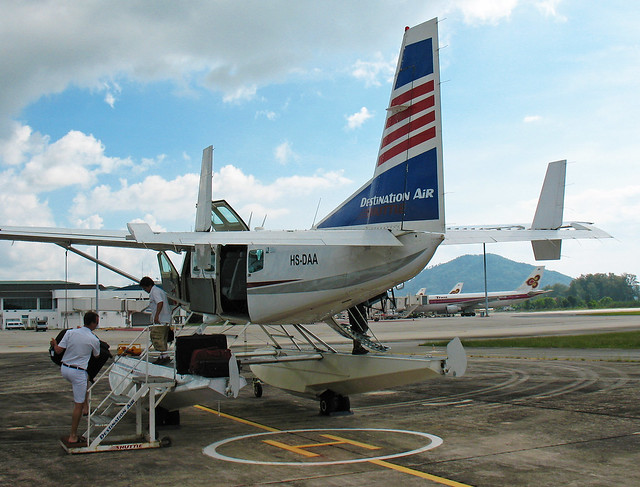 Unlike a big 300 seat aircraft, boarding here takes 3 minutes, a quick safety briefing, fasten seatbelts, and you're off! The take off was very smooth, I could hardly tell when we left the ground. It's been a while since I flew in a small plane in the Caribbean. You have to ignore the noise and rattles! As we left the airport and flew over the east coast of Phuket the view below was very green... 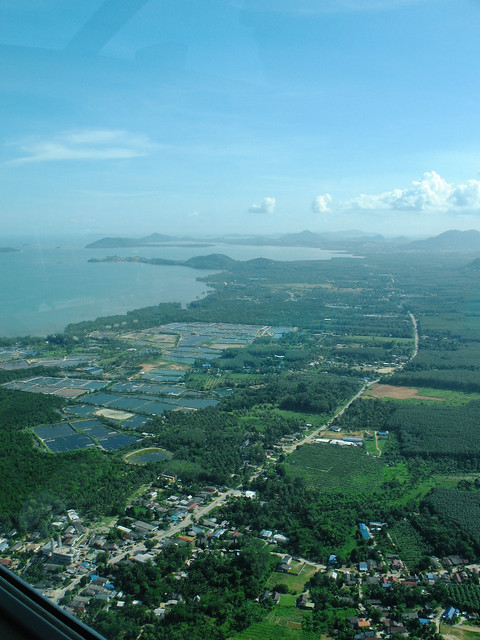 On the outbound flight I did not take a window seat - better let a "paying customer" get some great photos! I just enjoyed the ride. If you take a flight, and want to take good pics, best to bag a window seat or ask if you can take the copilot seat. Here's the view after flying over Phuket looking towards Koh Yao Yai... 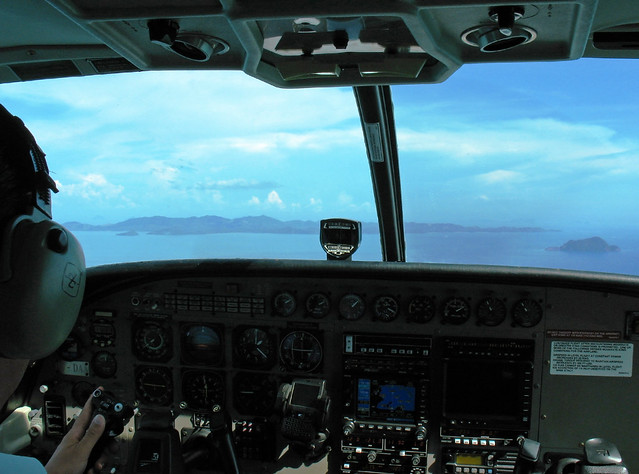 I learned later that you can also charter a plane for a sightseeing or aerial photography tour - you'd need to contact Destination Air for prices. If you had a small group, I reckon you'd have a great experience and a chance for some great photos without spending too much per person. 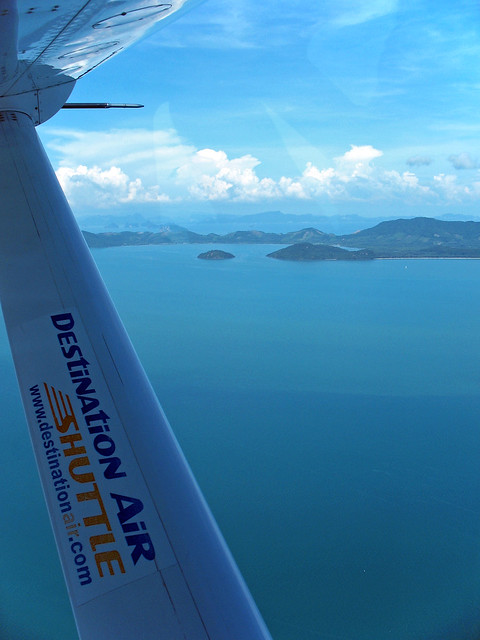 It's only 45km to Phi Phi, the flight is about 20 minutes. The customers on board were staying at the Zeavola Hotel in Phi Phi. We landed on the water on the east coast and taxied to a floating platform where customers were met by a longtail to take them to the beach. The resorts on Phi Phi's east coast are very nice places, a real getaway from noise, from stress. I can assure you it's very nice to stay in a place where there are no cars!

Video above - landing at Phi Phi on the east coast of Phi Phi Don. Landing on the water!

The floating platform is moved according to the season. Right now it's still on the east coast but once the NE winds start, this will move to the west coast of Phi Phi Don. We said good bye to the passengers heading to their hotels and I chatted a while with Gerry the pilot. He's a Canadian and used to fly seaplanes in Fiji as well as in the frozen North, eh. He told me that he'd read Jamie's Phuket Blog and the blog had helped him decide to come to Phuket! After a while we found out that nobody else was heading back to Phuket - the return flight was just for us! 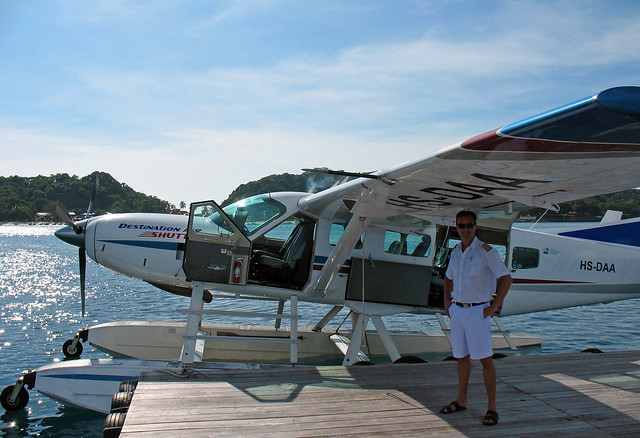 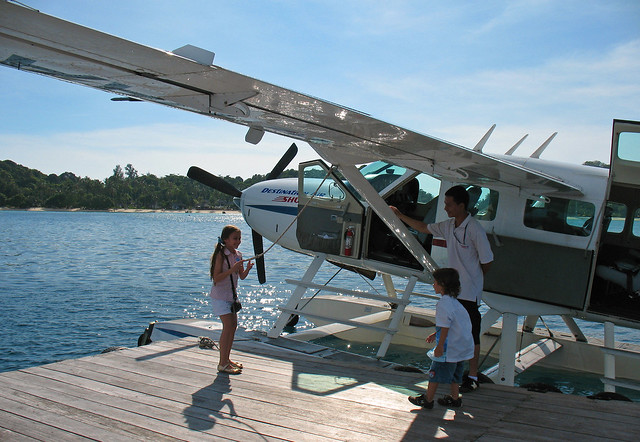 No holiday in Phi Phi for us... we just headed straight back home to Phuket, well.. almost. Gerry detoured a couple of minutes to the south so we could fly right over the amazing Phi Phi Le Island! Oh, and I got the copilot seat :) 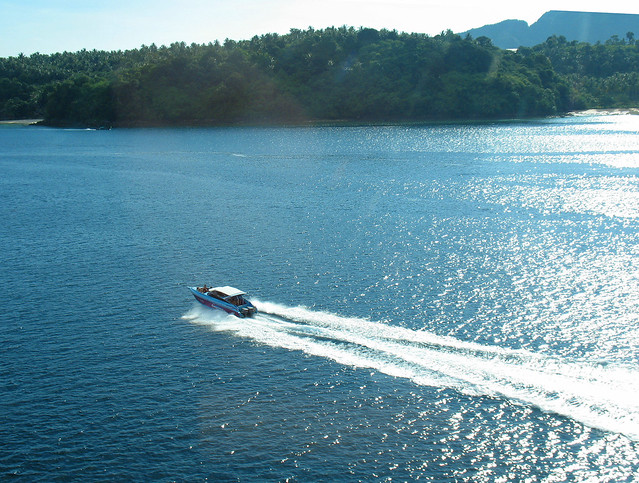 No matter how many times you have seen this island, the view from above is absolutely breathtaking. And here I was thinking I was too old for breathtaking experiences.... 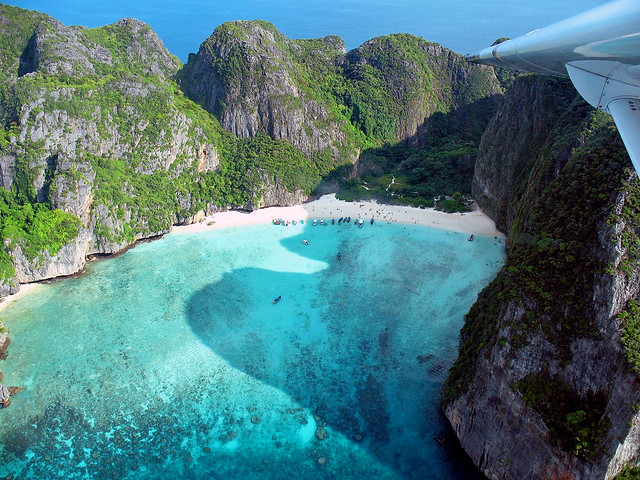 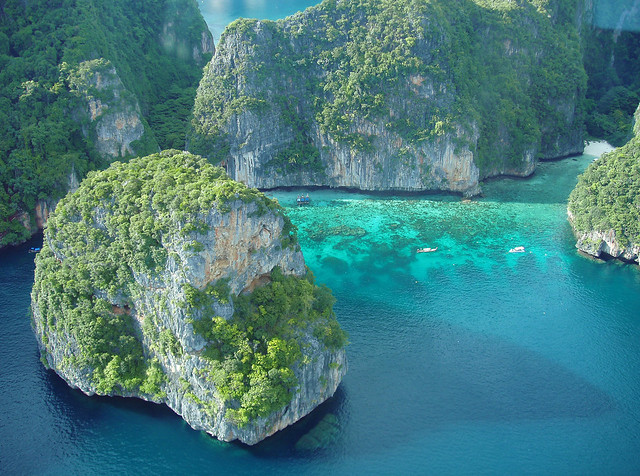 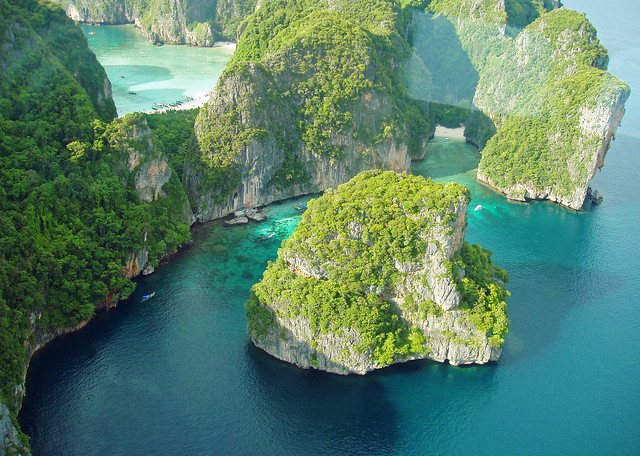 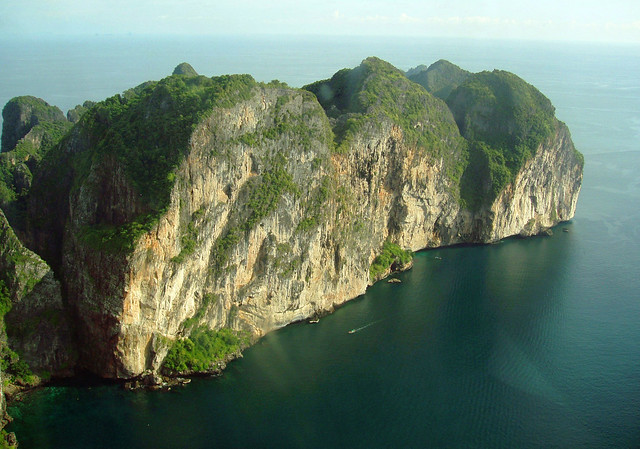 Video - flying over Phi Phi Le ... I should have thought to clean the window!

Koh Yao Yai is a huge island in between Phuket and Phi Phi, stretching up into Phang Nga Bay. We have been to Koh Yao Noi several times, but Koh Yao Yai remains a target for me.. before the developers move in. We got plenty of views from the seaplane. Absolute paradise. 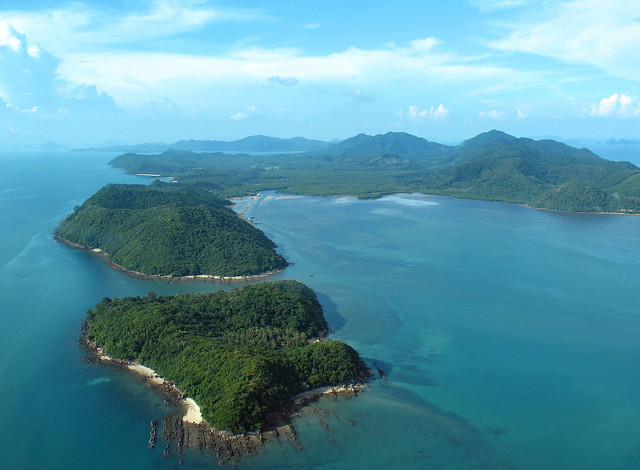 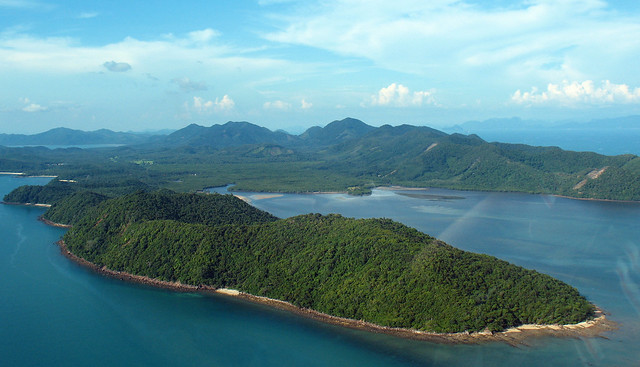 Anyone for sailing? You can sail around Phang Nga Bay for days and hardly see a soul. And yet, you're within sight of Phuket island. This area is absolutely gorgeous and from the air you really get an idea of the wide open spaces, the green islands, the nature... 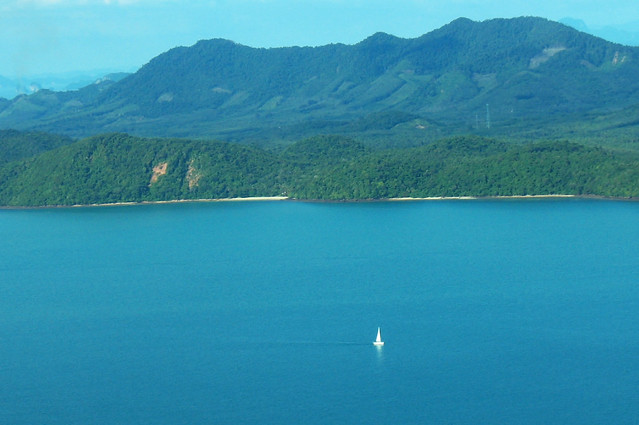 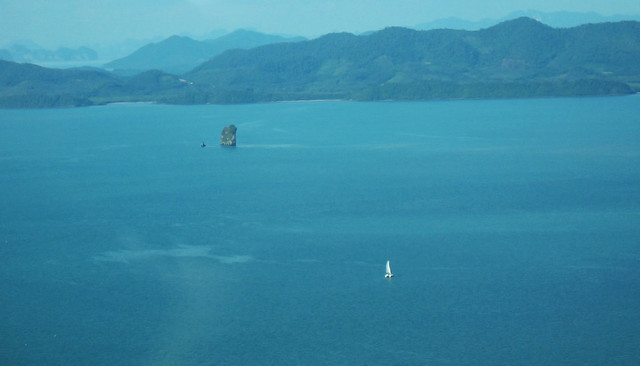 A final couple of photos of islands off Phuket's east coast and of a mangrove river in the NE of Phuket. We also flew over one of our favourite restaurants at Bang Rong, near Bang Pae Waterfall. Sometimes hard to know where to point the camera... All photos on this page by me or my wife. Photos look great, but wish I had a better camera! 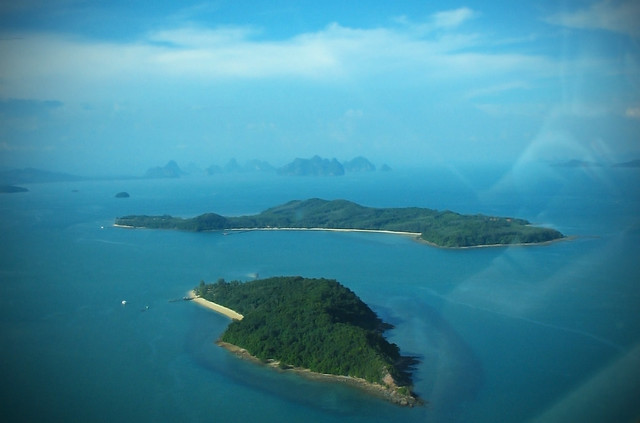 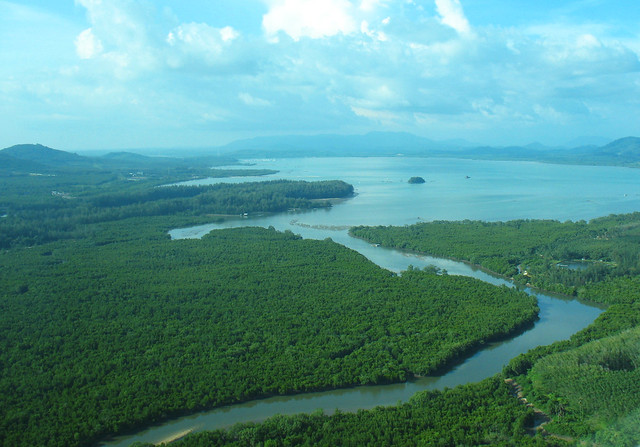 A couple of minutes later we landed back at Phuket Airport. I was momentarily worried by an eagle that decided the runway was a good place to hang out. It took off rather lazily towards us as we landed. One hopes the eagle knew what he was doing! Our great experience was over. I must say.. If you want to do something different, I reckon Destination Air can help! They can do flights to other places too, such as Krabi or Koh Lanta, or charter flights to just about anywhere within range, either for transport or for a tour with the most amazing views.

I hope we can do this again someday, it was truly a great day yesterday for the whole family :) Thanks to everyone at the former Destination Air for the experience.

UPDATE - Destination Air no longer exists, but hey, we had a great day! I hear rumours of helicopter tours now in Phuket....


You have been reading : Seaplane Flight to Phi Phi