Over the years 10 years this blog has been online I have blogged about many temples in Phuket including Buddhist Wats, Chinese Shrines and even a Sikh Gurdwara. Phuket also has a Hindu Shrine, and various Christian places of worship. Phuket has a long history as a safe port where traders from Arabia, India, China and Europe did business with local Malays and Siamese. Phuket's population changed over the centuries, with different people and cultures being dominant, but in general Phuket and Siam (Thailand) always stayed open to all religions. Thailand is a secular country, the laws of the country are not set by any religion and there is freedom of religious practice. The south of Thailand has a large Muslim population and this includes Phuket. I have never seen exact population figures, but everyone seems to agree that about 25 - 30% of the local population in Phuket is Muslim. Some parts of the island such as Kamala, Rawai or large parts of the north of the island have a large Muslim population. I've been here so long that the mix of people is normal. I know it surprises some visitors who may be expecting Phuket to be all Buddhist. Some Muslims here dress in western clothes, though you may see people in more traditional Muslim clothes around the island.

So I realised that despite the large Muslim population here, I have rarely mentioned Islam in 10+ years of blogging! I did once write about a Halal festival, and Muslim owned/run restaurants such as Abdul's Roti Shop or the Bang Rong Floating Restaurant. You may find quite a few restaurants in Phuket that don't have pork on the menu as they are Muslim run. People ask me sometimes to recommend Halal restaurants. I don't really know about this. But if you eat near a mosque in a Muslim area, you will probably be OK!

Anyway - this page is not meant to be a discussion about Halal food or Phuket history or Islam. I wanted to blog about mosques in Phuket and have been out and about recently taking photos, although I realise that there are many mosques that I have not seen, especially in the north of the island. The map at the end of the page shows the location of 27 mosques. I think there are a few more. But you can see there are mosques all over the island and I had some comments on Facebook and Twitter from Muslims who have visited Phuket and not found a mosque. Well, now you can find one! They are often a bit hard to find! I have enjoyed taking some little drives to find mosques and discovering hidden streets and different corners of Phuket. As there are many more mosques than those I photographed, I think some more exploration trips are needed.

Let's start with the south of Phuket island. I have driven past the entrance to this beautiful golden mosque (below) in Rawai many times, but never stopped until now. 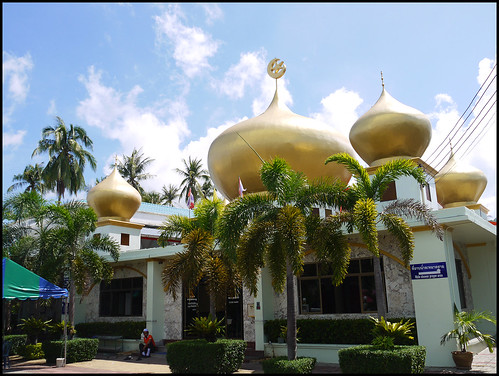 And just a little close to Rawai, a side street down to the sea. I had never been down here before. 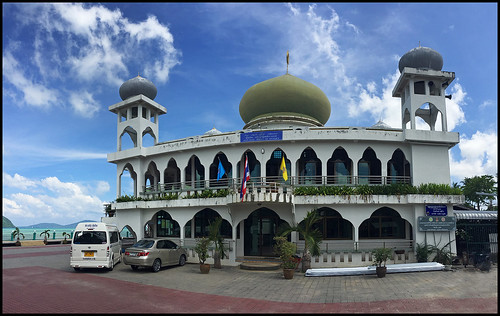 (above) Aowalul Hidayah Mosque by the sea. Very nice!

There is one more mosque in the backroads between Rawai and Naiharn beaches and I'll stop there one day and take a photo, but otherwise the whole south of Phuket (Chalong, Kata, Karon, Naiharn) has no other mosques that I know of.

Patong - the biggest, baddest, most touristy part of Phuket. Nightlife, hotels, bars, sea, sun, sand and .. mosques? Many years ago (around the year 2000) I lived in a (now-demolished) apartment at the north end of Patong, with a Muslim restaurant over the street and a mosque just a couple of hundred meters away. Yes, crazy Patong has a Muslim community too. A new mosque was built a few years ago, I think it was completed in about 2011. 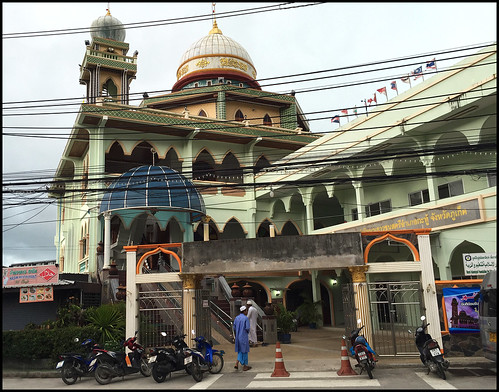 (above) Patong mosque is located by the main road out of Patong on the north side of town.

If you head north from Patong, pass the Novotel and Diamond Cliff resorts, you reach Kalim, home to several hotels and fancy restaurants and - up a small side road which I'd not explored until a few days ago - a local community and a mosque! 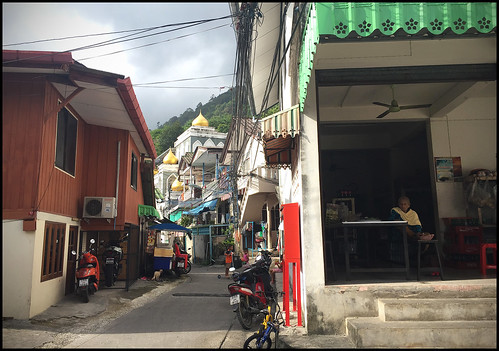 (above) Looking up the narrow street to Kalim mosque.

The road from Patong, passing Kalim, winds up and down and round many bends on its way to Kamala beach, which is largely Muslim, or was ... I remember 15 years ago Kamala was quite un-touristy, no bars, hard to get a beer! The beach area is now quite busy, but you still have a Muslim graveyard taking up a huge area of beachfront land, and that is not going to change despite the price of property! The main Kamala mosque is inland towards the hills and there's a smaller mosque too which has a fancy new mosque being built next to it, also on the back roads. 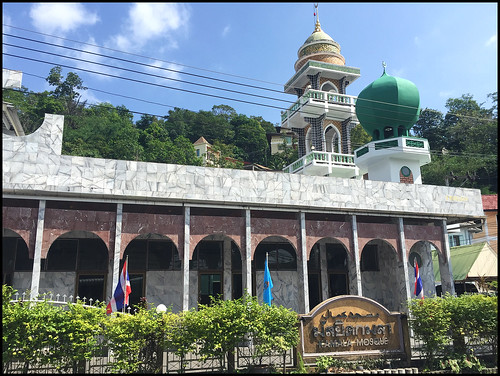 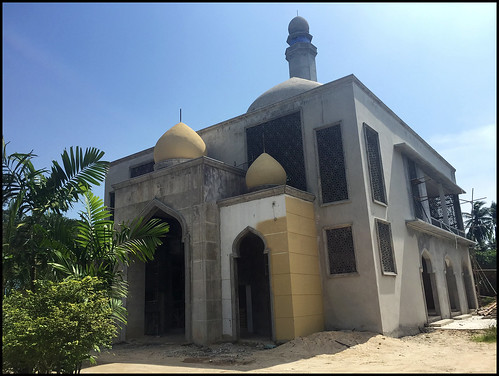 Moving away from the west coast .. The area around Phuket Town is a real mixed bag of cultures and religions. There's a street close to the old town which features a Chinese shrine, a mosque and a Catholic church within about 300 meters. The Yameay mosque is the only one near the center of town, which does tend to have a much more Chinese-Thai population. 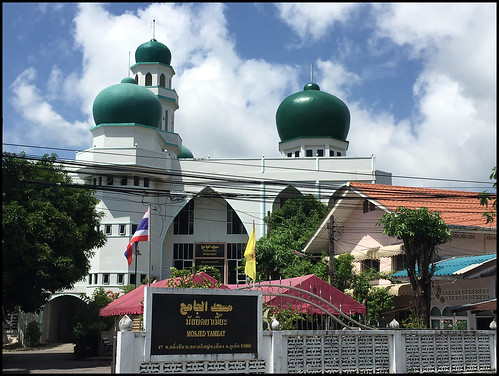 (above) Yameay Mosque in Phuket Town

To the south of town, the Cape Panwa area is largely Muslim and there's one big mosque (Issatul Islam Mosque) close to the deep sea port on the way to Phuket Aquarium. There is also a smaller mosque on a side street which we pass on the way to The Beach Bar (one of our favourite hangouts). 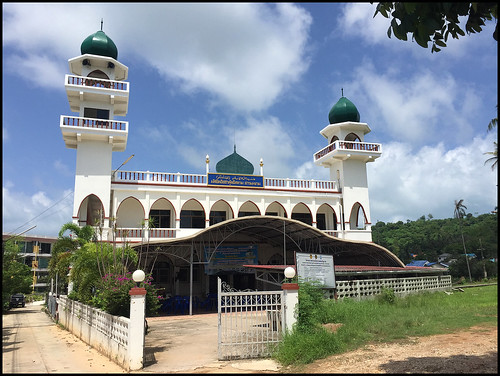 (above) Mosque at Cape Panwa, to the south of Phuket Town

On the east side of town close to the main ferry port is a new mosque, the Al Madinah Mosque. Many of the Muslims in the Phuket area were (or still are) fishing folk, so it's no surprise to find a mosque in this area which is near the fishing port. Looks like this mosque is almost complete. There was scaffolding around the golden dome when I passed recently. 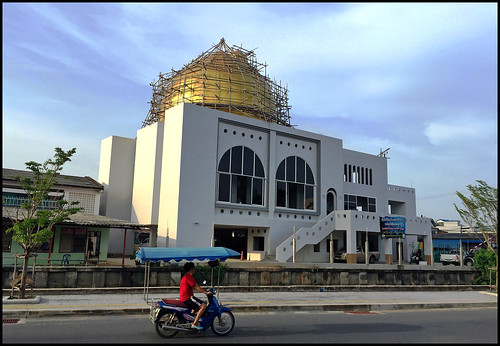 (above) Al Madinah Mosque in the east of Phuket Town

And a little north of town, another Muslim fishing community is found at Laem Hin - home to Laem Hin Seafood, a favourite restaurant or ours, and you can also get a longtail boat over to several floating restaurants from here. To reach the restaurant and jetty you pass the mosque, which is another that has been recently rebuilt. 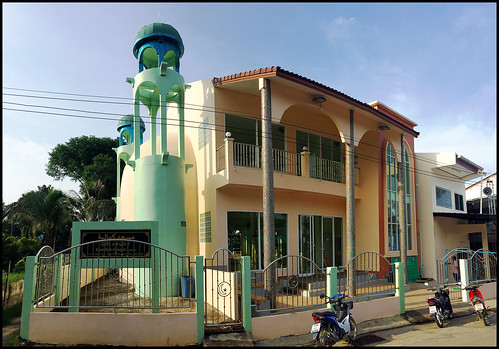 (above) Kamaliah Mosque at Laem Hin, to the north of Phuket Town

Heading north from Laem Hin you pass the Boat Lagoon and there's a Muslim school on the east side of the road which has a mosque in the grounds. I did stop here to take a photo, but the school gates were closed. There's another (I found on Google Earth) not much further north. Actually I found about 10 mosques on Google Earth which I have not seen or photographed. This page will be updated over time!

Reaching the Heroine's Monument (a statue/shrine at a main road junction between Phuket Town and the airport), if you turn left, the road heads back to the west coast via the Cherng Talay area, before reaching Surin and Bang Tao beaches. The mosque close to Bang Tao (Mukaram Mosque) is quite impressive. 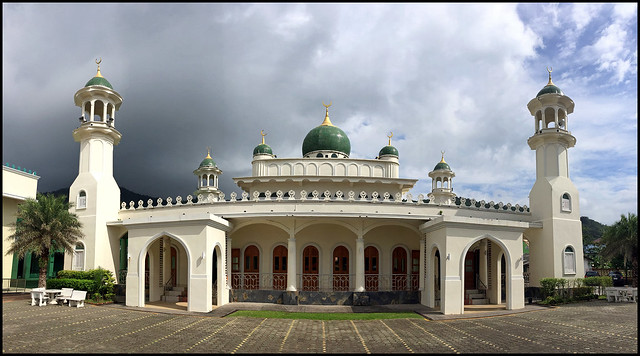 (above) Mukaram Mosque near Bang Tao and Surin beaches.

North of this point there are at least a dozen mosques in the northern part of Phuket, of which I have visited three! Back to the Heroine's Monument, if you take the road east you can get to Bang Pae Waterfall and the Gibbon Rehabilitation Center. Just after this you reach the Bang Rong community, yet another Muslim fishing village. There's a floating restaurant in the mangroves and a jetty for boats to Koh Yao Yai and Koh Yao Noi islands. 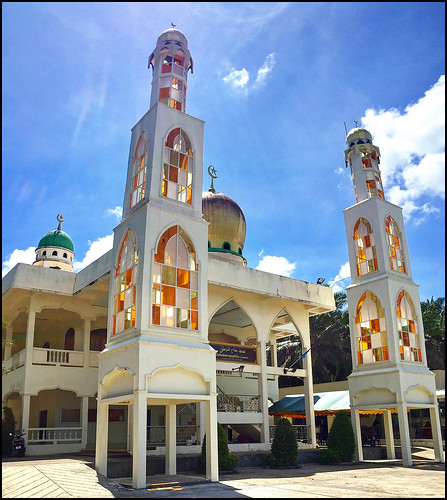 (above) Miftahul Mumineen Mosque not far from the Heroine's Monument (a few km) on the road towards Bang Rong. 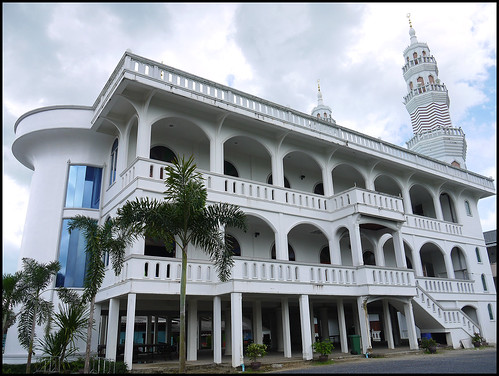 (above) Mosque at Bang Rong in the northeast of Phuket.

The map below shows that there are many mosques in the north of the island. At least 5 north of the airport and several along the main road in the Thalang area or close to the airport. I think I need a little trip in this direction to take a few photos. The only one I stopped at was the Darul Itihaad Mosque just south of Thalang town. The Thalang area also features several interesting Buddhist temples. I did not realise before searching closely that there were so many mosques in the north of the island. I thought there were just a few, but there seem to be about 10 north of Thalang town! 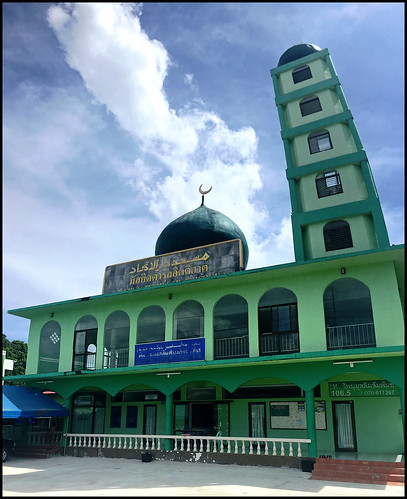 (above) Darul Itihaad Mosque by the main road south of Thalang.

I hope this page is useful and / or interesting for Muslim visitors to Phuket and for anyone (like me) with an interest in culture and history. The map below shows locations for most mosques in Phuket. I may have missed a few small ones. For now, thank you, shukran and see you in Phuket!

You have been reading : Mosques in Phuket