The popular Songkran festival is one of those "love it or hate it" events. It can be viewed as fun, but some people like to complain about it getting a bit silly and losing its traditional roots. Songkran is the Thai New Year festival and is celebrated in Thailand and also in neighbouring Laos, some parts of China and Cambodia. The Thai New Year and Thai calendar were in use until 1888 in Thailand, but now January 1st is used as the official start of the new calendar year. The old Thai / Buddhist year is 543 years ahead of the standard calendar. The water throwing is the most obvious aspect of Songkran, but the older traditions are very much still alive. At homes and temples. Buddha images are washed with water containing flower petals, and at some temples, people carry dirt to the temple which is to replace dirt that they have carried away on their feet during the year.

Songkran in Phuket is really only 1 day - April 13th - although some people do start to party and throw water in the afternoon of the 12th and the official holiday is 13th to 15th - a public holiday, so there is plenty of partying mixed with the more traditional side of Songkran. This blog post shows some of my Songkran photos over the years.

In 2011 I was in Chumphon for Songkran, which is my wife's home town. Maybe the old way of life is a little more obvious here than in Phuket, or maybe I just got a more local feeling since I have been with the family. We had a ceremony at home pouring water on my wife's parents hands (this is called Rodnam Dam Hua). The water fights in Chumphon Town were just as big as Phuket - we drove around town in our pick up. I got singled out quite often - not many foreigners here! Bloody hot day resulting in a very wet and sunburned and slightly drunk Jamie (that's me)! 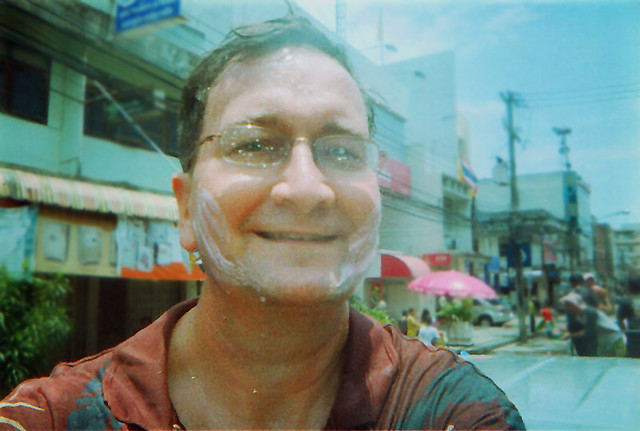 In previous years I have been in Phuket for Songkran. For a few years I tried to ignore this silly festival....then for a few years we tried to stay dry, but took drives around Phuket with me trying to take photos through the closed car window. In 2009 we did a drive round Patong in our pick up truck, with my wife and I taking turns to drive. Patong is certainly the main water fight, although if you head to Sapan Hin, in the south of Phuket Town, you get a good day too, with less tourists and more locals. In 2010 I did not try to take photos - just stood outside a friends business, throwing water with one hand, bottle of beer in the other :)

• Phuket Hotel Booking - Phuket is a great place to be for Songkran!

So, for Songkran 2011 in Chumphon I took some photos with an old underwater film camera, needed some photoshopping to enhance the colour as the camera used 800 iso film, so most photos were a bit overexposed. Also got some photos on the street near the homes of various family members. 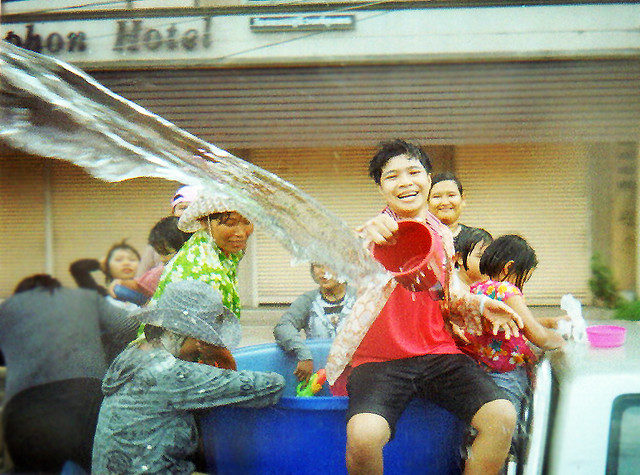 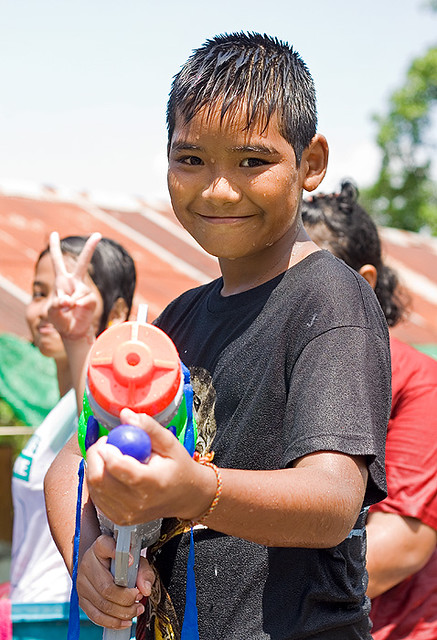 And here's some more photos of Songkran in Phuket over the years ... 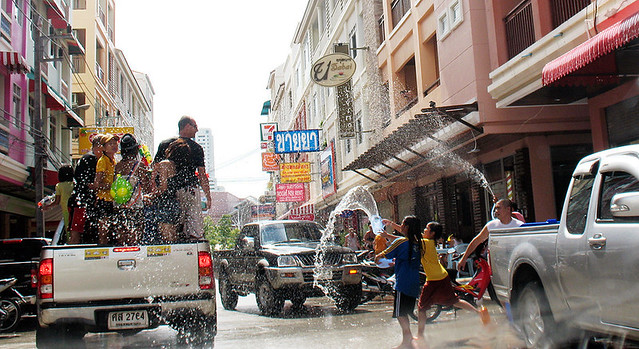 (above) Songkran street battle in Patong! If you want to party on Songkran, Patong is the place to be. You WILL get very wet, but at least in Phuket the water throwing is limited to just one day (13th April). We enjoyed the day we drove around on April 13th 2009, though the kids did start to get cold - people do tend to throw ice water, which can be a shock, but nice on a hot day! 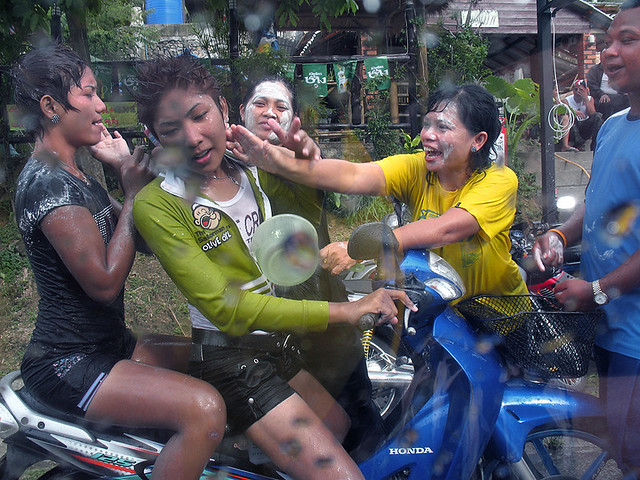 (above) People like to use talcum powder mixed with water and will smear it on your face for good luck. Not everyone wants the powder, but you should accept it in the spirit in which it is offered. Useful hint: Don't wear your best clothes during the Songkran festival! 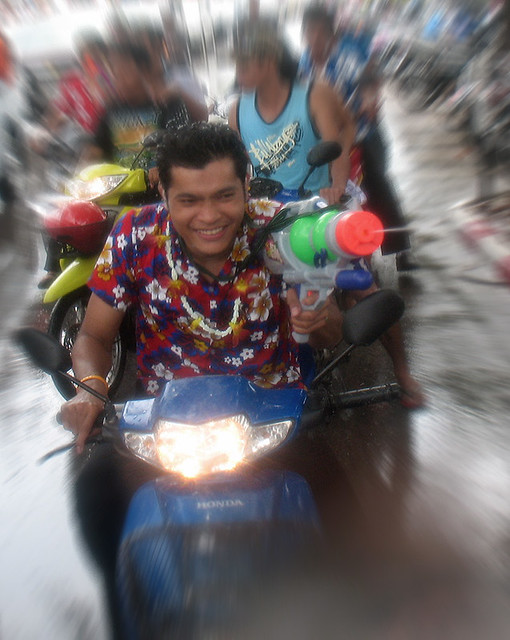 In town, people are scooting around on mopeds, in trucks, or some (like we used to) in cars with the windows up! It's a sad fact - there are a lot of accidents around Songkran mostly related to a combination of fast mopeds, alcohol, water and slippery roads. No fun to have a bucket of ice water in your face when you are riding a moped, but then again, if riding on Songkran day, you really should ride slowly and expect to get very very wet. The guy above with his colourful Songkran shirt is obviously enjoying the day! It was due to the number of accidents that the water throwing was limited to one day in Phuket a few years ago. 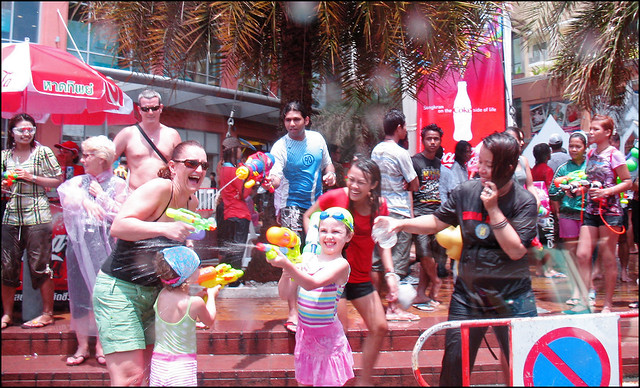 Fun for all the family! If you are going to be in Phuket or anywhere in Thailand on Songkran, be ready, go out and have some watery fun! The photo above was taken outside the Jungceylon mall in Patong. I like the fact that the girl shooting her water pistol has no idea she's about to get a cup of ice water down her back :) 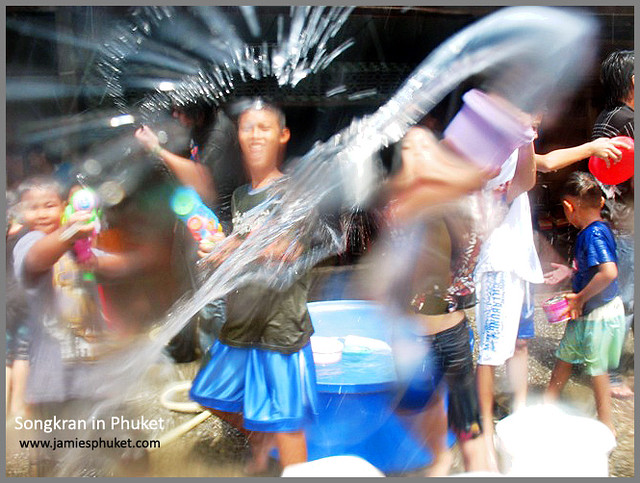 A day for the kids ... for one day every year, the kids can get away with pretty much anything! They can soak strangers, definitely soak their family, they can play with water all day and nobody can get mad at them. Our kids love it, I think all kids love Songkran! 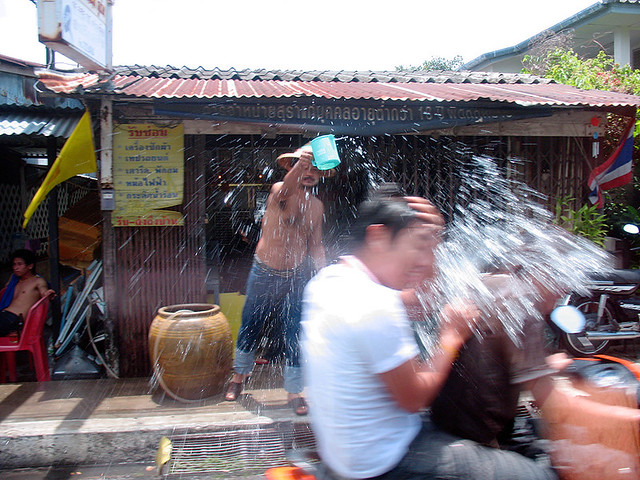 And you're never quite sure where the next soaking is going to come from. This year riding around in the truck I got drenched at regular intervals, many times by unseen assailants. There's absolutely no point trying to stay dry! The guys on the scooter (above) just got owned! That photo was taken in Phuket Town on Phuket Road on the way south towards Sapan Hin park.

Songkran is what it is - you can have fun or you can grouch. For one day, getting soaked is fun, especially as April 13th is normally going to be a very hot day, like it was this year. I am happy that it's only one day in Phuket - I know that in Chiang Mai it goes on for days, which could be a drag. In Chumphon, there was only water throwing in town for 1 day, but on the 14th people headed to the 2 main beaches near Chumphon (Sairee and Thung Wua Laen) to continue the party. I was very happy to be more involved with the family. A good Songkran. Happy New Year! More Festivals in Phuket


You have been reading : Songkran Festival in Phuket - April 13th 2022