A trip to Phang Nga Bay is part of many visitors holiday to the Phuket area. We've done several trips before, although we don't go with organised tours. In the past we have driven up to Phang Nga (just over an hour from our house) and hired a longtail boat from the jetty which is a few km west of the town. I blogged one of these trips in March 2007 : Phang Nga Bay. I do recommend people to try doing it this way, rather than signing up for a tour. Getting your own boat gives you more freedom, and a boat trip to James Bond Island could be combined with a visit to other attractions such as Suwan Kuha Temple, or a visit to the lovely Sanang Manora forest park.

Well, we keep on exploring and wanted to try something different. A couple of years after that 2007 trip we found a restaurant that we liked - Samchong Seafood, which is nearly 20km closer to Phuket than the main Phang Nga Jetty, and I could see on Google Earth that the mangrove river where the restaurant is located led right out into Phang Nga Bay just a few km from James Bond Island. Only thing we were not sure about was whether or not we could hire a longtail boat from anywhere near the restaurant. But for sure there are plenty of longtails around there.... 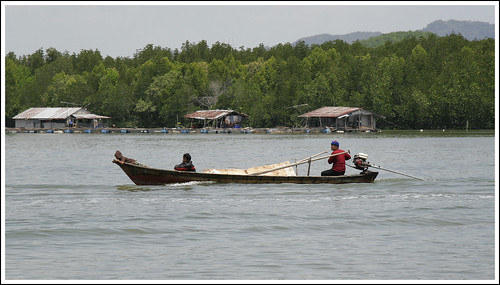 No worries! We sat down to eat and asked for a boat - sure, no problem, 1800 Baht for the boat for the afternoon (note : this was a few years ago, prices may change!). So we enjoyed lunch over the water and went to meet our boatman. UPDATE - for more about doing it this way - see Phang Nga Bay - Doing It Our Way! Tours can be booked with Easy Day Thailand. 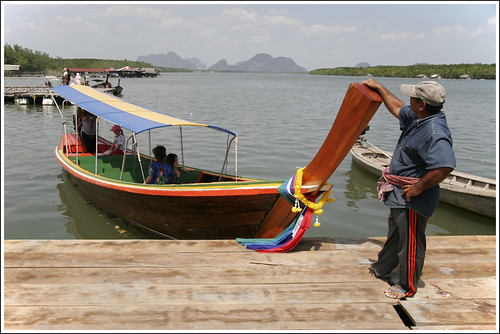 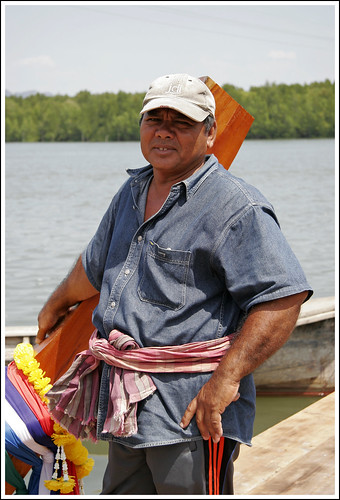 It was a gorgeous sunny day, typical for March in Phuket. We headed out along the mangrove river and I was pleased that this longtail had a new engine which purred rather than the normal deafening put-put-put. This was a Rolls Royce longtail. It was about 10km from the restaurant to James Bond Island, the first few km passing the mangroves and then out into the bay. I love this scenery. I'd love to have a boat and spend days cruising around. There are (based on my quick count on Google Maps!) over 50 islands in the bay. We saw some new scenery this time, as we were starting from a different base. I'll say it again - I love this scenery. 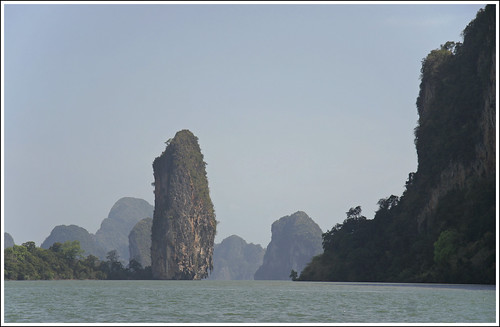 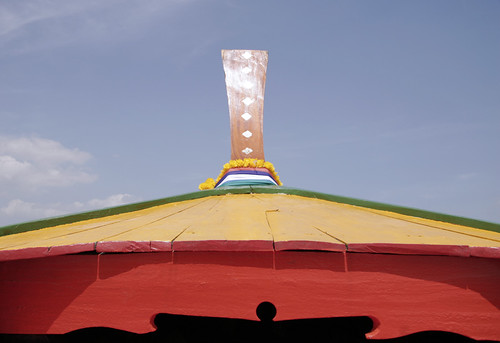 Our kids enjoyed the ride too. Last time we did this our son was maybe to small to remember. This time they both loved it. If people ask me about "things for kids to do" in Phuket.. I mean, yes you can try the new waterpark or play minigolf or use your hotel kids club.. but they'd be missing out. Our kids like this great scenery, rides on boats, it's an adventure! 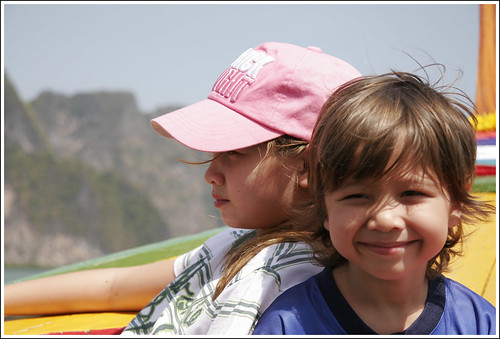 After passing several spectacular islands and massive rocks rising from the sea, we approached the famous "James Bond Island". That's not it's real name of course, it's called Koh Khao Phing Kan or Ping Gan or however you wish to transliterate the Thai spelling. But thanks to Roger Moore and Christopher Lee and that little guy called Nick Nack, well the island got it's nickname, and really nobody calls it Ping Gan, which means leaning rock. 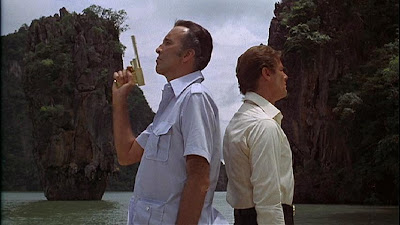 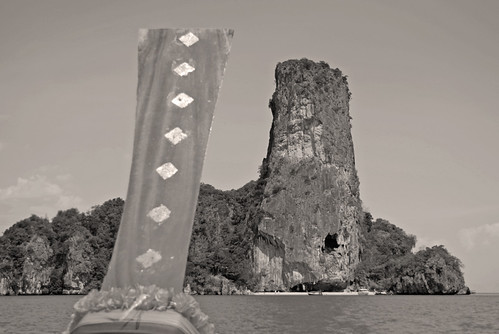 We landed at a small beach where there used to be a jetty. Not sure where that's gone. The National Park staff have a desk under an overhanging rock where you get your tickets.. the whole bay is a national park but you only pay fees if you land here :)

Now, the main attraction of this island is the standing rock just offshore, which itself is sometimes called James Bond Island, but is actually called Koh Tapu, meaning nail island. You can't see it from where you land - have to clamber up and down some stone steps to get views of (perhaps) Thailand's most famous rock. When you look out over the water to "the rock", it's beautiful. Somehow, you can ignore the fact that you are sharing the island with several hundred other people. We tried to avoid peak time - we got the longtail from Samchong a little after 2pm, so were at James Bond Island around 2:45 and stayed for around 45 minutes. Still plenty of visitors at that time. Next time, now that we know the route, we'll go later. I want to get photos in the late afternoon light, and surely by 5pm it'll be too late for most of the day trippers? But if you look out to sea, your photos will be uncrowded...

A few views of Koh Tapu 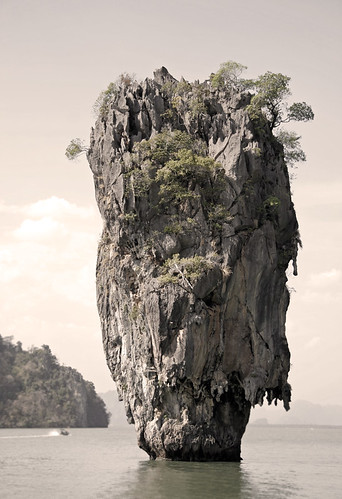 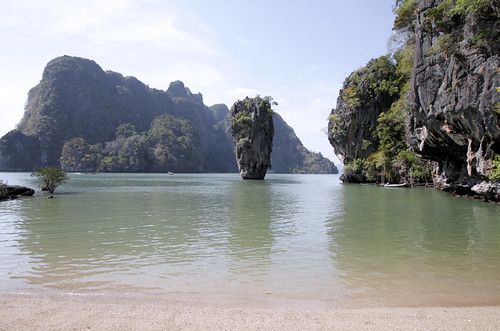 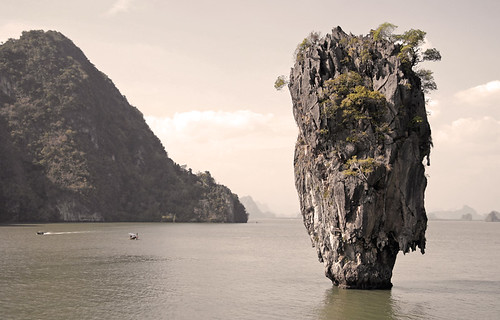 It's a small island, a few little caves to clamber into (kids like), and of course if you are gazing at the rock (Koh Tapu) and turn around, you see a collection of stalls selling souvenirs and drinks and shells and ... as much as I wish that they were not there, I know they will remain. 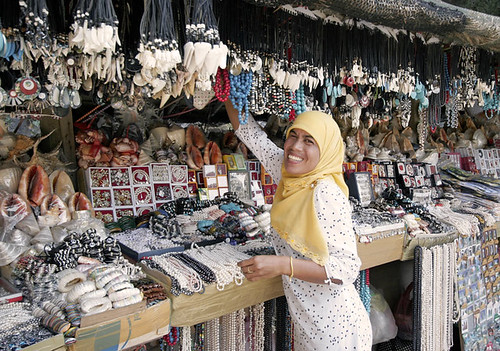 What of the leaning rock? The real name for this island (Khao Ping Gan), nothing to do with movies, comes from the amazing rock formation here modelled by a visiting monk. The islands here are limestone and in this case a huge wedge of the rock has been split, creating this massive leaning slab which rests on it's other half, a real work of nature. This old monk kept his hand on the rock as if feeling the energy of the world. Or something. 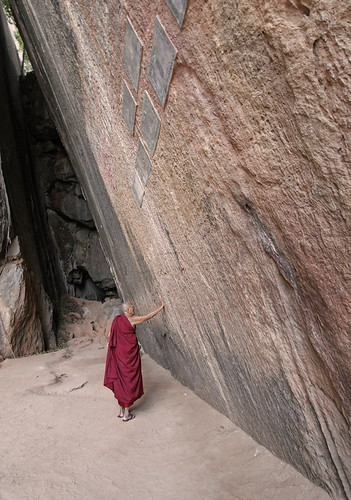 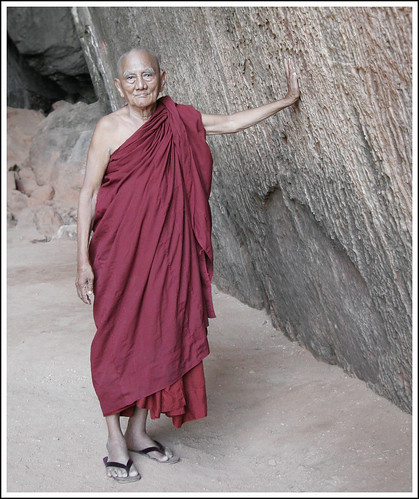 Our kids meanwhile went off exploring... 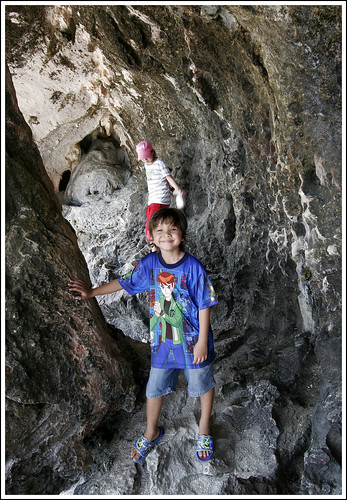 We had hired the longtail for the whole afternoon, and there was time left to head about 4 miles further north to Koh Panyee, the Muslim fishing village built next to a towering rock - a quite wonderful place. Lots of photos. And we'll be back. Many times!

A private tour like this can be booked with my friends at Easy Day Thailand - the tour is pretty much based on the way we do it.

NOTE : If you are asking around various places for trips, be sure to say the full name "James Bond Island". If you say "Bond Island" people may mishear you and think you said "Bon Island" which is a totally different place close to Rawai Beach in Phuket.

Nearby sights and attractions:


You have been reading : James Bond Island in Phang Nga Bay