It was festival time last week in Phuket! Chinese New Year was on February 10th (welcome to the year of the snake!), and the Chalong Temple Fair was on from the 9th - 17th February. And at the weekend from Friday 15th - Sunday 17th February, it was the Phuket Old Town Festival which was taking place for the 14th time highlighting old Phuket Town as a place to visit, and featuring music, art, food and history. For sure Phuket has some nice beaches and lots of hotels and lots of tours, but Phuket tourism really only kicked off less than 30 years ago, and the real Phuket is easy to find if you get off the beach and explore! This years festival was way bigger than last year, with street stalls, stages, entertainers and crowds covering several square blocks of the old town on Thalang Road, Krabi Road, Phang Nga Road, Soi Romanee and more. 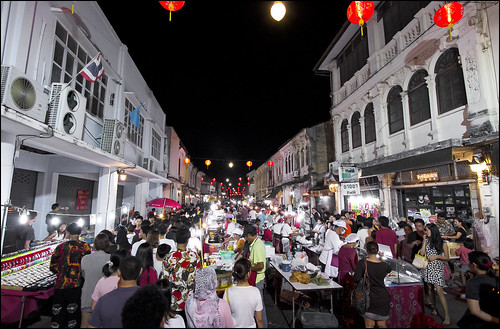 (above) Food stalls along Krabi Road on Sunday 17th February

We skipped the Friday events, as I was working until 6pm and rather annoyingly, a big festival procession was planned to start at 5pm. It's a shame that I miss things like this sometimes due to work. We could have gone later, but planned a few drinks with friends and anyway we knew that we'd be there on Saturday evening as our kids were signed up to perform on stage along with lots of others from their music school - they learn guitar. Pop and rock, not classical. So on Saturday afternoon we headed into town around 5pm before things got busy for a little wander before checking in at the big stage on the corner of Phang Nga Road and Phuket Road. Better get the kids something to nibble before they go on stage - and finding food during the festival was not hard. Food stalls everywhere! 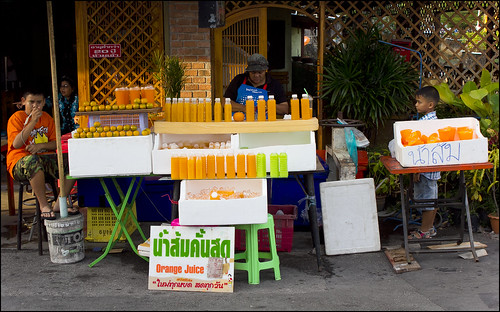 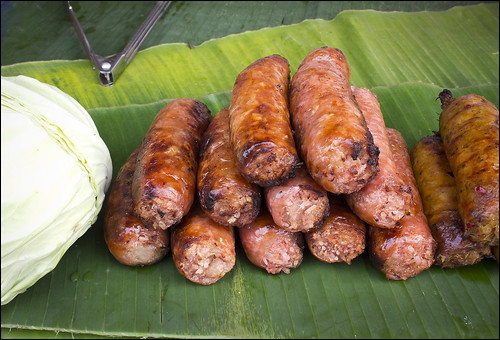 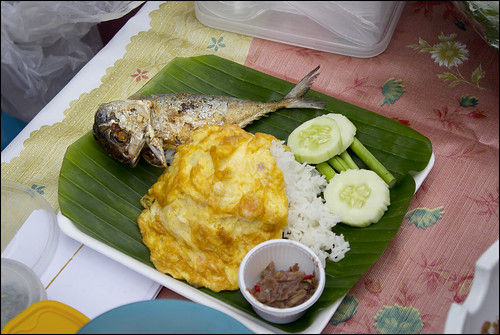 We checked in at the stage and our kids little pop group was given number 20 in the line up. We figured that might mean a wait of about 90 minutes, but they were to be the 20th music act, this did not count dance groups and all the announcing in between. Our kids music teacher was also a bit frustrated by the end! He prefers something small scale with just "his" kids performing. Well, anyway, I figured that I had enough time for a walk up Phang Nga Road to find a cold beer and take some pictures ... 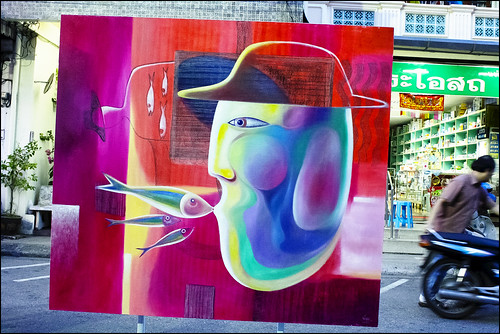 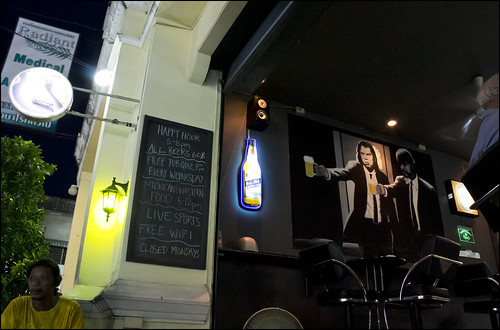 Phang Nga Road had a number of artists exhibiting or selling their talent. I was tempted to buy something, but really we don't have a place to put a huge painting like the one above. I found a cold Chang beer at the Roxy Pub which is a popular weekend hangout, one of many small bars and cafes in old Phuket Town. Thinking of a blog post about a "pub crawl" in town sometime soon! Well, I had a beer and wandered back up the road to the stage to see how things were progressing. All along the road, and indeed all over the old town, were street entertainers and performance artists such as these guys below ... 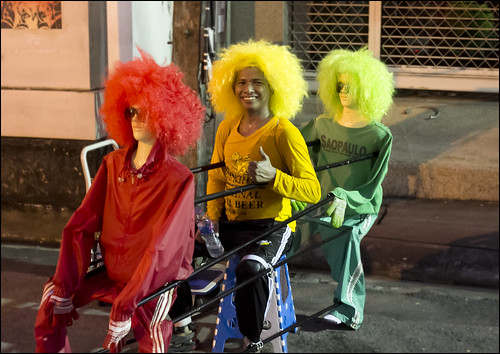 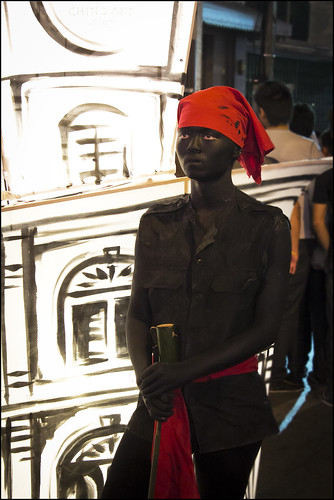 And the time ticked by ... we waited behind the stage with the clock tower across the street. 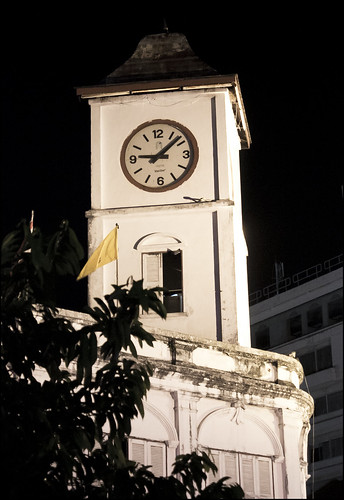 And finally our kids got to perform one song (should have been 2, but later acts only got 1 darn it) on the stage in old town, well done kids! I am amazed at them going on stage with a crowd watching, very proud Dad. Then we could all take a little walk before heading home. This was around 10pm and the streets were packed! We were all tired, so planned to see more on Sunday. 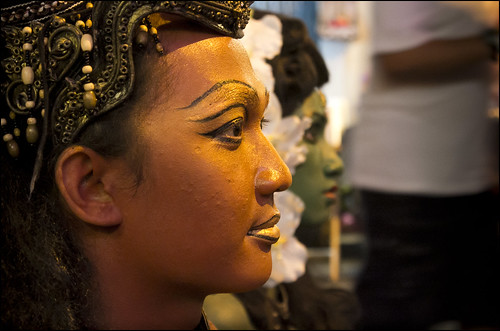 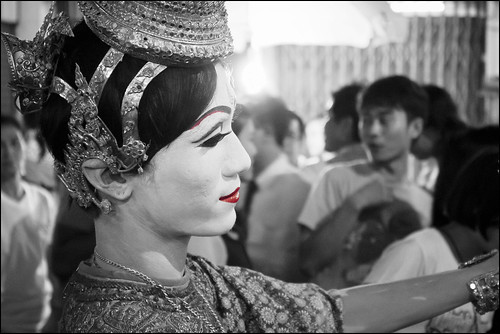 (above) Painted faces in Old Phuket Town on 16th February 2013

On Sunday 17th we headed to town again for a walk, to get some food, and I reckon it was even more crowded than Saturday! We did not get to town until nearly 8pm so the streets were already packed and finding a parking space anywhere near the old town was hard work! Walking in the crowds trying to take photos and not lose my wife and kids was a challenge at times. Again, there were performances, art and food everywhere along the roads, plus the several big stages set up too. 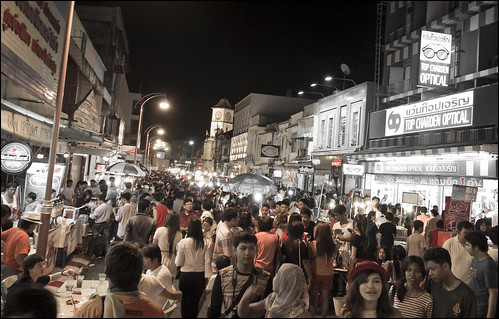 After a hot day, nothing beats a "very cool beer" : 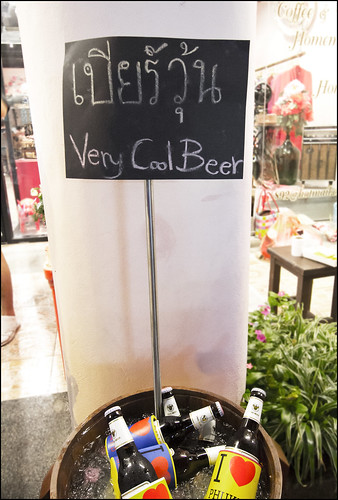 We wandered up Thalang Road which we'd missed on Saturday. Thalang Road is kind of the heart of old town, and is nice for a walk any evening. We had hoped for some food at Kopitiam, a nice old style cafe, but it was absolutely packed, so we looked for street food instead. Just west of Kopitiam, Thalang Road becomes Krabi road and there were lots of food stalls. We also found a secondhand book stall where my daughter got an 'X-Factor' annual for 10 Baht and the boy chose a 'Captain Scarlet' annual, also 10 Baht... not sure he knows the history of Captain Scarlet though! Krabi road was also very busy ... 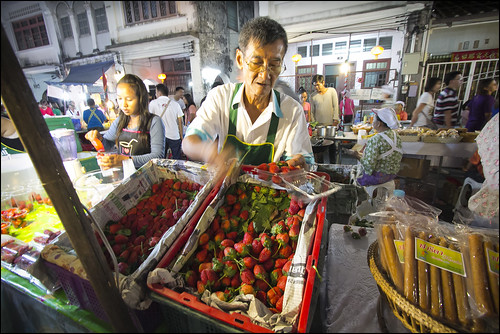 (above) Strawberries for sale on Krabi road 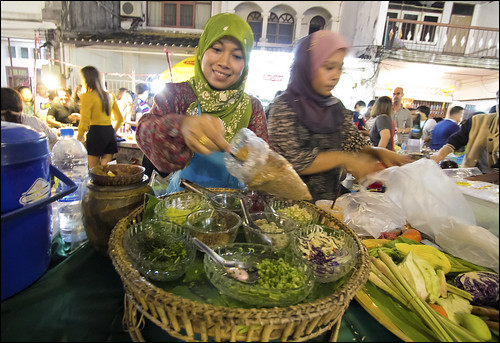 Back along Thalang Road, there were aspiring singers everywhere! Seems like any kid with a guitar could just show up and go for it! And some were drawing a crowd ... 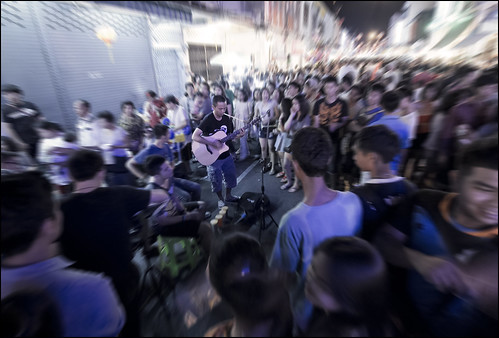 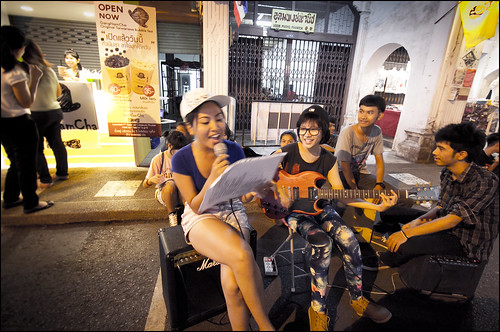 We walked down a block to Phang Nga Road and there was some more serious music being played on a stage set up outside the old On On Hotel which has been closed for ages, undergoing renovations. Part of the festival was about history, Thai culture, local food etc... but here we have a rock band who were doing Guns 'n' Roses, Iron Maiden and UFO. We stopped to listen a while with our rock-star kids :) 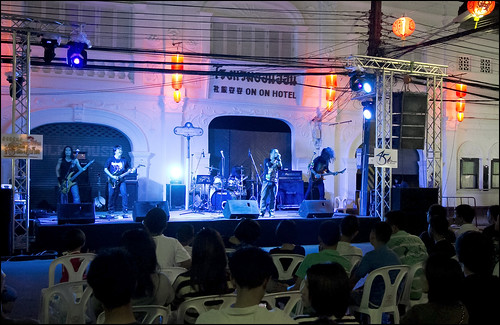 Lots of art on the streets. One guy was drawing a huge cartoon map of old Phuket Town and I really liked this giant cloth - great colour... 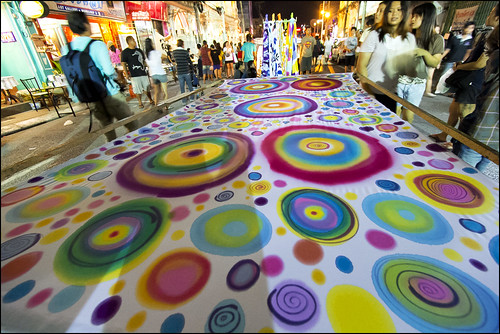 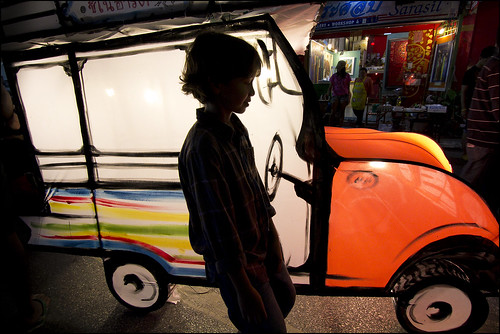 With the streets still full of people, we had to head home, as of course the kids have school on Mondays, so a late night was not an option, and it was already nearly 10 o'clock, rather past their bedtime! Lots of fun, these local events, and the old town is a great place for a street festival. This is the side of Phuket I like, and really the raison d'etre of this blog. Beaches, nightlife, tours and hotels - yes, Phuket has plenty - but Phuket has so much more...


You have been reading : Phuket Old Town Festival 2013