A what wedding? If you are not familiar with the history of Phuket, you probably don't know about the Baba or Peranakan culture. I am not an expert either. In a nutshell, Nyonya (female) and Baba (male) are the terms used for the descendants of mixed marriages between Chinese immigrants and locals. Malaysians use the Malay word Peranakan. Apparently the word "Nyonya" is not used much as it's hard to pronounce, so male and female alike are all Baba! Many Chinese came to Phuket in the 19th century as traders and to work in the tin mining industry which created a lot of wealth for Phuket. Some of the biggest and richest families in Phuket are "Baba" families, including the Hongyok family. The current Mayor of Phuket City, Somjai Suwansupana is also a Baba. There is a lot of history there, a lot that I think we cannot fully understand without being a part of the "clan"!

So - about the weddings - the Peranakan culture is not just in Phuket, it's found also in Malaysia and Singapore. The Phuket Baba wedding has been promoted by the TAT and this year some 18 couples from Hong Kong, Taiwan and China were due to be wed in traditional style, meaning lots of dressing up and lots of tradition. The wedding event took place over 2 days, 14th - 15th August starting with a garden party at the Hongyok family house in Phuket Town. I had driven past the house before and wondered who it belonged to.. now I have been there! Saturday afternoon was a bit rainy, I arrived quite early and sat in the car for 20 minutes hoping the rain would stop. It did, as it has a habit of doing. Thankfully, or the garden party would have been a washout. I entered the gates into a world of old ladies dressed in their traditional clothes. There were many more old ladies than men. A stage was set up in front of the house and seating for a good 150 people in the garden. Nothing happening on stage yet, so I approached the house, not sure if I'd be let in! Entering this old family house was an odd experience. The history was clear, the house is from the early 20th century, and the main drawing room was full of old Baba ladies chattering away... 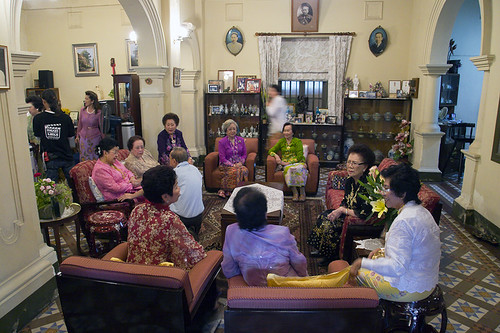 It was a glimpse into another world, a Phuket far removed from tourism and modern conveniences, an old Phuket. You can get a taste of this with a walk around the old part of Phuket Town, but this scene was like old Phuket brought back to life! Nobody minded me being there.. I mean, it was not a private party, it had been advertised in the local papers and the event is partly organised by the TAT.. but just being the only foreigner felt odd! Phuket has seen so many changes in a lifetime, I wonder what these 2 ladies have seen... 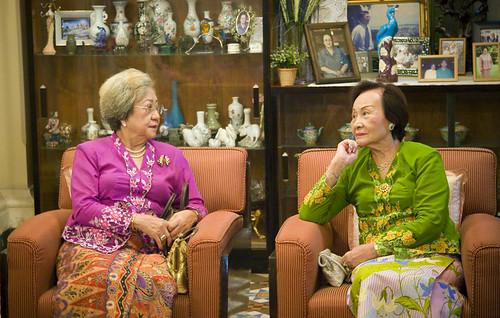 Not being a regular at top social events for wealthy locals, I admit to not knowing who most of the people were. I recognised some faces, but if anyone reading could tell me (leave a comment) who the people are in these photos, I'd be much obliged. In particular, who is this man below? He seemed to me to be part of the family, an elder member of the Hongyok family? 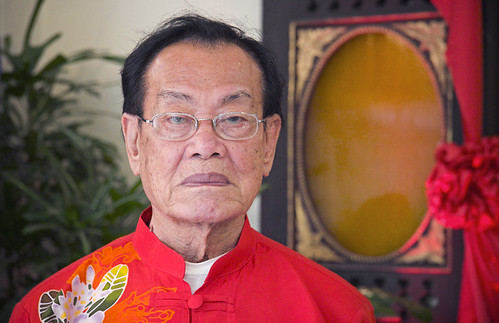 An orchestra was starting to set up on the stage outside, and with the last of the drizzle clearing up, I also went into the garden. Behind the assembling orchestra, this guy was hidden away and setting up his Fender steel guitar. Maybe there was some country music later in the evening after I left?! I was there when the music started but I did not hear any steel guitar. 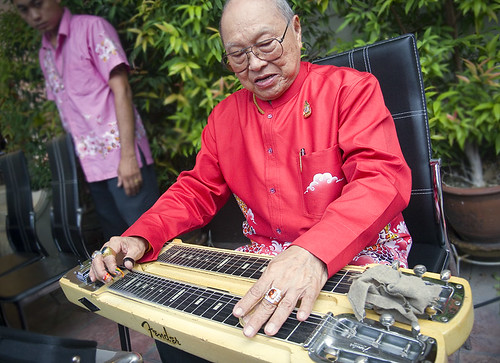 The older ladies started gathering in the garden to watch the show, I continued snapping photos. There were noticeably very few younger people. Does the younger generation not feel so connected to the traditions? The older ladies sat sipping tea. There is certainly a real sense of pride among the people here. It's in the air. 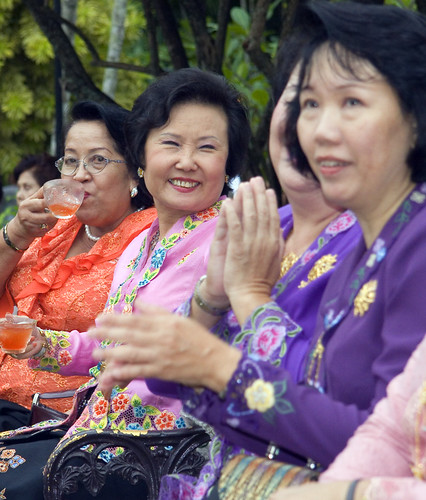 A handful of other foreigners appeared including Alastair and Tim who both do websites and blogs here, and a couple of wealthy foreign residents who I have seen before, but despite the mentions of this event in local websites, like many other local events I have attended, there were just a few foreigners present. I did find some young Baba girls in the garden too, probably members of the big families. The traditions are yours to carry on... 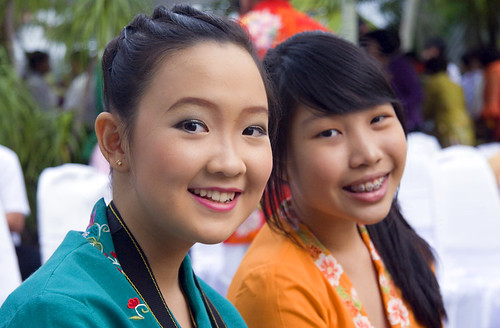 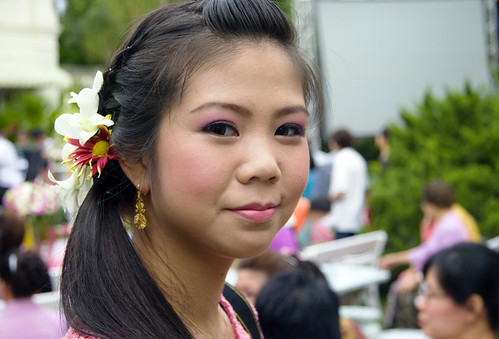 More guests were arriving including some important people like Khun Anchalee who is deputy secretary general to the Prime Minsiter, her husband is a Phuket Democrat MP, and then the wedding couples also arrived, not all dressed up yet, as the actual wedding ceremony was to take place the next morning (the Sunday morning ceremony included a procession in town, unfortunately I had to work and missed it.. a couple of links at the end of the page to other people's blogs/photos). 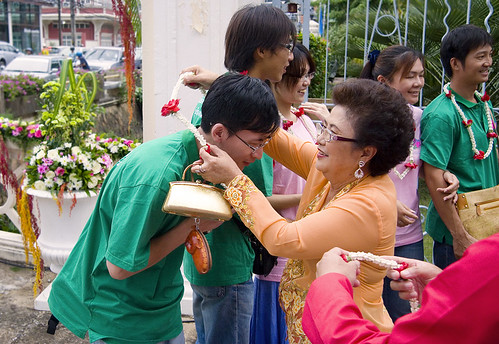 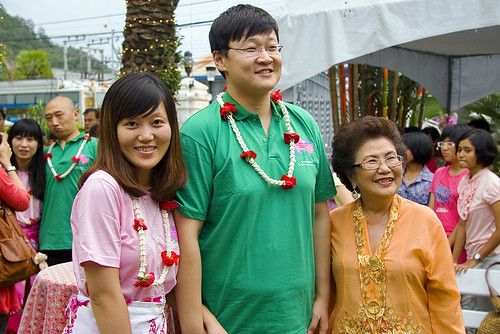 After some music (including "Over the Rainbow"... I often hear rather odd and rather un-Thai music coming from Thai orchestras!), there were speeches given (in Thai) about the Baba wedding tradition, and all were translated into English - I suppose this must be mainly for the non Thai couples taking part in the event which I read that they pay 39,000 Baht per couple for. At one point I could see the guy translating into English looking around for people to "translate to", he spotted me and Tim hiding behind a tree and seemed glad he wasn't talking English for nothing!

As the evening progressed and it started to get dark, it was time for me to head home. Another taste of Phuket history and culture. I would have liked to be at the ceremony and see the procession next day, but for now, continue working 6 days a week looking after a dive center :) People were still arriving as I was leaving, guess they were being fashionably late. This little baba arrived with her family... 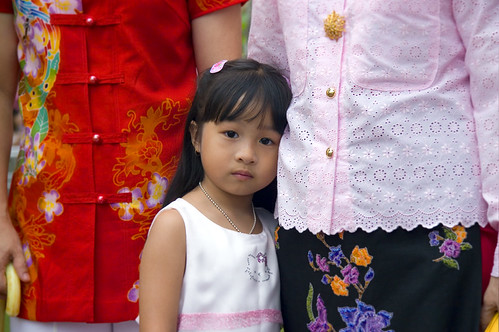 These events, these very local events are what I enjoy most in Phuket. I always happy to discover new places to explore and attend festivals that are based on the history and traditions of Phuket. I realise this kind of thing passes most visitors by, it's totally unrelated to beaches and tourism, but for me, the longer I stay here, the more I get pleasure from the "other" Phuket.

The second day of the wedding event was Sunday 15th - I did not attend the procession, should have gone to work late I guess! But Tim was there - you can see some photos on his blog ...

• Tim's photos on his blog

More festivals in Phuket on this blog:


You have been reading : Baba (Peranakan) Wedding in Phuket