The year 2019 has been a big change. If you follow me (and please do) on Twitter or Instagram you will have seen that my family and I are no longer in Phuket. I did not make the decision lightly, I suppose it's been rolling around in my mind for years now. I arrived in Phuket in November 1999, built a new life, got married, had 2 kids, bought a house and was absolutely sure that I'd be living in Thailand for ever. We maybe had a few years struggling to make ends meet, but in recent years things were going very well. Until 2014 I did not make any trips back to England. My parents made many trips over to Thailand, the last in 2013, but then in 2014 Mum got sick and passed away. Dad was moved to a dementia care home and from 2014 - 2017 I went back 5 times, but still felt like Phuket was home. In the summer of 2018 we had a big family trip for nearly a month in England and I think this really started us thinking about a move.

And then in December 2018 my Dad passed away. I was back in England again in January 2019 for his funeral. Meanwhile we started thinking about our kids futures, plus tourism in Phuket was down and I was not making so much money the last 2 years. Plus I am now 50 years old and was worried that if we left it much later it really might be tricky for me to find a decent job in England. And despite all this I did really want to stay in Phuket! We have our house there (now sold!), so many friends, and to be honest a pretty easy life! But ... the move has been made. 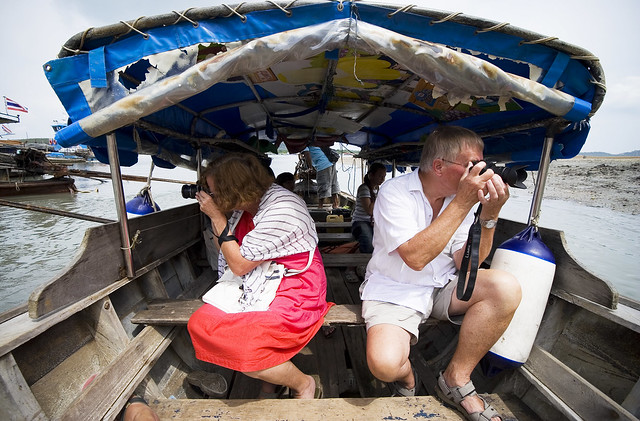 (above) Mum and Dad loved their visits to Phuket.

So I spent half of January in England, the other half working, no time for blogging! February was similarly dominated by work - living in Phuket is great, but it's not like I was on holiday .. work, family, responsibilities .. it was a normal life most of the time, but in Phuket! No trips for us in February, but it was Chinese New Year - not a holiday I have yet written about on this blog. 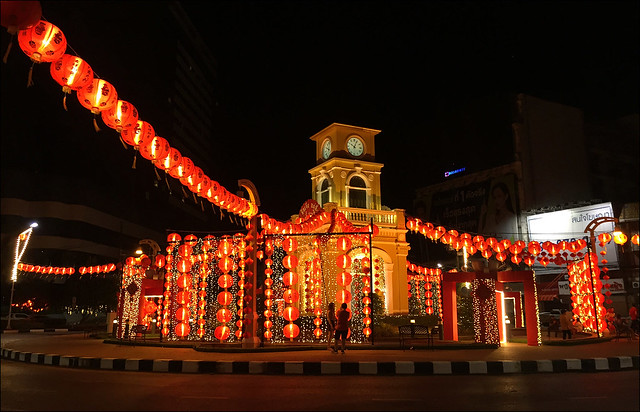 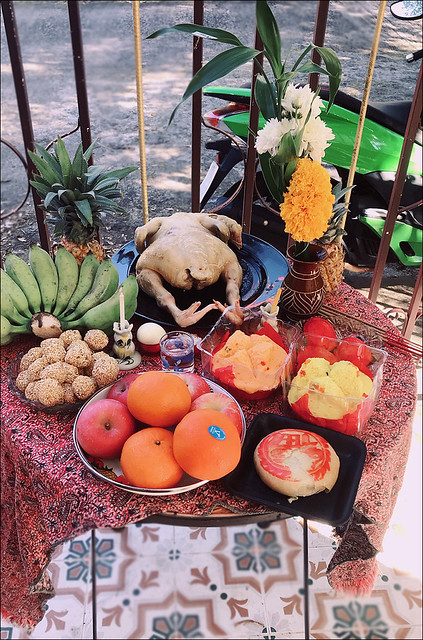 (above) Chinese New Year offerings at our house

For many years I worked at Sunrise Divers, Karon Beach as a dive instructor and then as manager. Well, if you want to dive in Phuket, you won't have me to help you now, but please do contact Sunrise Divers! The photo below is a view I saw hundreds of times, Karon beach from the road to Karon from Patong. It's not bad, right? 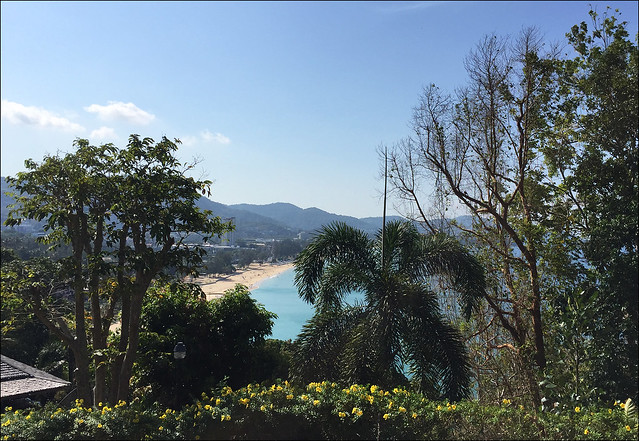 I finished work at the end of March planning to head to England in May and allow some holiday time with the family first. Beginning as it often had done for many years at The Beach Bar, certainly one of our favourite places in Phuket. We first went here in 2006. 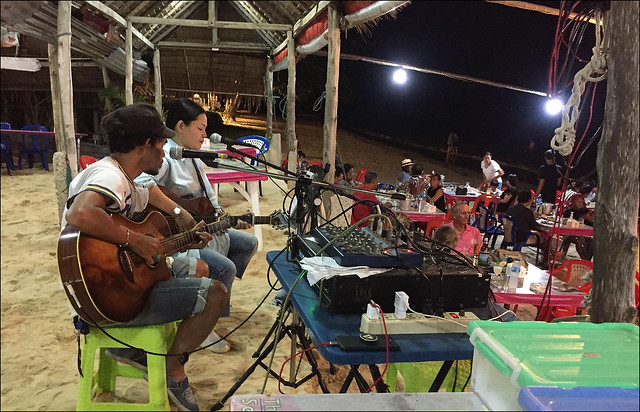 Kids school had a school holiday in April for Songkran. The last school year we had changed their school to Phuket PALS which offers the GED qualification. They very much enjoyed their school year which finished in June. My wife and I and our son headed to Chumphon for a break, and our daughter took a trip to Australia! She is 18 now and keeps reminding me of that fact, as I keep reminding her she is still my little girl.

Oh and I did actually add a new blog post about a small local restaurant that we had been frequenting a lot in the last year - see Gomen Restaurant in Kathu. 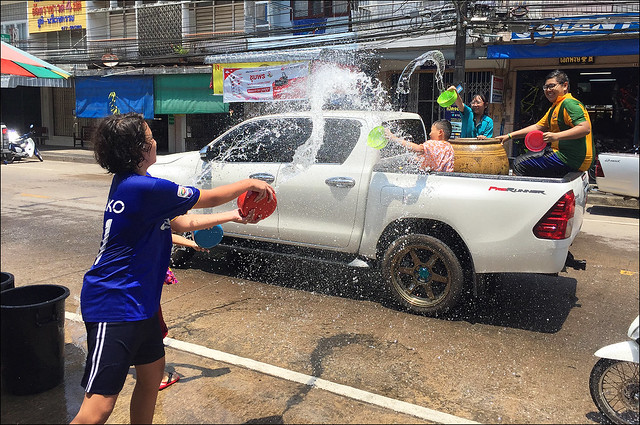 (above) My boy enjoying some Songkran splashing in Chumphon. We also had a couple of days in Krabi meeting up with members of my wife's family. The last few years we've had several very nice short trips to Krabi from Phuket - only just over 2 hours to drive there from home. Certainly recommend a climb up to the top of the Tiger Cave Temple and visiting Railay Beach and the Emerald Pool.

So by the middle of May I was ready to head to the UK. Having just had a month of real holiday made it harder! So many beautiful places to see. And also, I left the family behind - the plan was that they follow in August - so my wife was left to clear out our house in Phuket and move everything to our house in Chumphon, sell our car and prepare for a new life.

(above) Leaving Thailand .. at Phuket international airport, May 2019

As this is the Phuket Blog, and I was not in Phuket for more than half the year, I won't post any photos of England here, but will think about a "what's it like moving back after so many years?" blog post. It was not super easy, as we did not have that much spare money. I needed to get work quite fast, and was hampered by getting sick - ended up 2 weeks in hospital in June and July with a gallbladder infection and then having the offending (and unnecessary) organ removed. By the end of July I had a decent looking job lined up, but did not start until near the end of August as I was recovering and needed time to settle in here with the rest of the family. 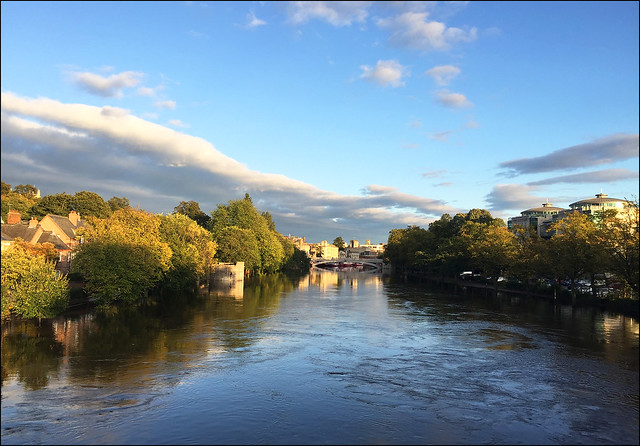 (above) River Ouse in York

We are living in York, renting a house, which is not cheap, have had to buy everything we need for the house from furniture to spoons, buy a car, get finances and UK paperwork sorted and I can say that only now, at the very end of December do I feel settled and relaxed. Kids are at school/college, plus my daughter has a part time job. We loved the long summer days and the autumn colours, feel a bit cold now, the short days are weird, but it's manageable. My wife went back to Thailand for a while trying to get our house sold - a lot of interest and I really hope someone will buy soon - see Our House For Sale in Phuket. (update - now sold)

Not sure when we'll get back to Phuket, let's see how the finances go. If not, I plan a holiday exploring the highlands and islands of Scotland! Right now I have a few days off around New Year - back to work on January 2nd. Someone buy our house in Phuket please! I will try to keep this blog ticking along even though I am not in Phuket now. Also starting a Yorkshire blog!

Jamie (not currently in Phuket)


You have been reading : 2019 - Moving from Phuket to England