A couple of weeks ago was our 10th wedding anniversary, so we were heading out for dinner. We asked the kids where they'd like to eat and they chose Dairy Hut - a place we've been going to regularly for years in Phuket Town just round the corner from the Bangok Phuket international hospital. It was still a bit early so we drove past Dairy Hut and headed towards Rang Hill, thinking maybe to veto the kids suggestion and eat instead at Tunk Ka Cafe. The road heading up Rang Hill from this side is not well known and is much narrower than the usual route up Rang Hill which starts just north of the old town. BUT before we reached the hill, my wife said "Ooh, whats that?" - a small restaurant with a yellow door, it looked interesting .... 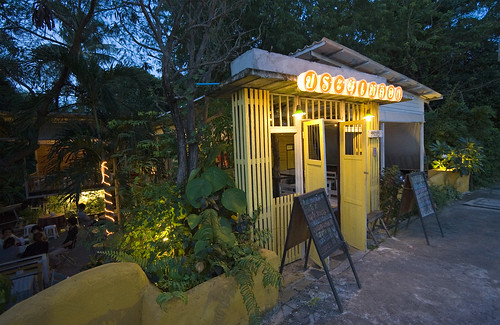 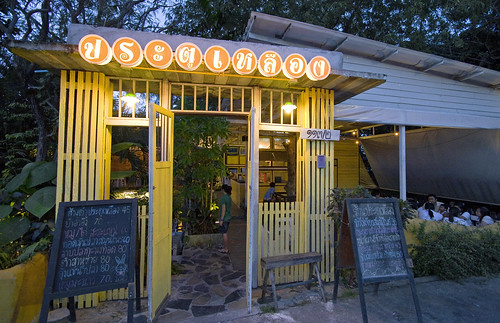 The signs are all in Thai, the restaurant is called "ประตูเหลือง" - Yellow Door. We had a look inside, checked the menu, the prices looked very reasonable, so we chose the Yellow Door for our anniversary meal! Note that the photos on this page were taken on July 9th - there's a clue - the food was so good we went back again not long after the first try.

We were there quite early, before dark and were just about the first customers, but over the next hour it filled up - was busy both times we have eaten there. Customers mostly young people, students, couples, but I saw a couple of families and older Phuket people. Seems the word has spread quickly - good food, good price, interesting restaurant. All the staff working there are young too, looks like it's been built and run by a bunch of friends. There is seating at various levels, by the road or down some steps in among the trees, or up on a raised platform with chairs and tables of all kinds of shapes and sizes. The menu is written in English and Thai but I am not sure of the English language skills of the staff. A restaurant in a location like this is not expecting too many tourists! I did see a couple of other foreigners there each time we ate, they seemed to be "local foreigners" like me :) 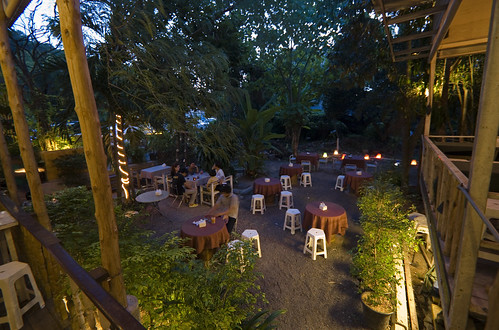 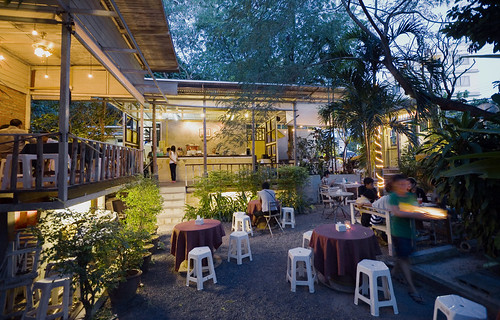 The prices are very good. Basic rice and noodle dishes starting at just 35 - 50 Baht, with Thai salads, curries around 70 - 80 Baht and I think the spaghetti was 60 Baht - always a good bet for the kids! We had 7 different dishes plus rice and drinks (only water/soft drinks, though they do sell beers) - our bill first time was 500 Baht, second time was 540 Baht and that was with an extra kid (friend of our daughters came with us) - not bad for a family meal - and we were pretty stuffed, the portions are a good size. Here's some of the food we ate (yeh, food porn photos!): 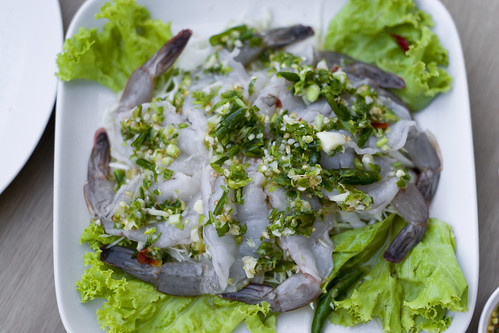 This is "Gung Che Nam Pla" (กุ้งแชน้ำปล่า) - raw shrimp with fish sauce, garlic and chili - my wife loves it. 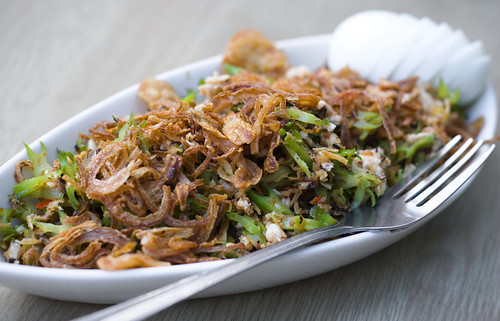 I am a big fan of Thai salads - this one is Yam Tu Pu (ยำถั่วพู) - made with wingbeans, minced pork, onions, chili, lime and coconut milk.. exact recipe can vary. YUM! I normally eat this with rice.

For the kids - spaghetti. First time they had a bolognese style, but second time was this version and it was demolished quickly, so I reckon the kids gave it the thumbs up! As an aside though - don't be expecting superb pasta dishes at little Thai restaurants, this is Thailand, not Italy. Many restaurants do spaghetti to cater to Westerners who are afraid of spicy food, but it's not often great. Kids won't complain though! 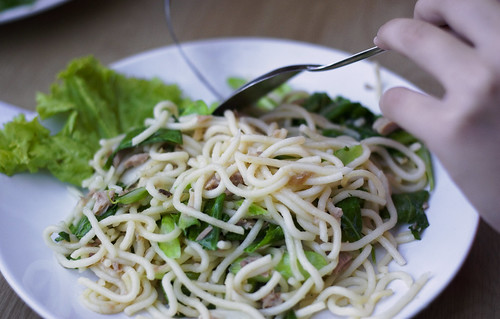 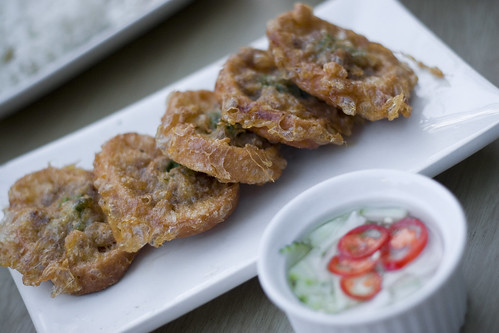 And some snacks - above is Kanom Pang Na Moo (ขนมปังหน้าหมู), fried bread with pork, served with some cucumber, onion and chili vinegar. I should have ordered a beer to go with that - it's definitely a beer snack! 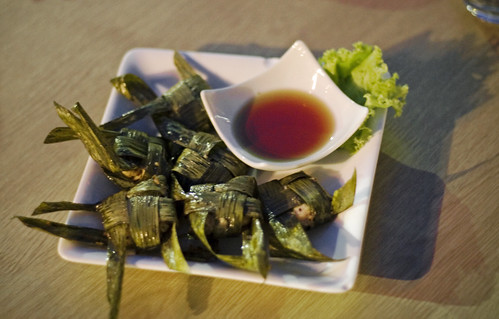 More! This is Chicken fried in pandan leaves, Gai Hor Baitoey (ไก่ห่อใบเตย) - small, almost bite size pieces of chicken wrapped in pandan leaves and deep fried. Lovely... our kids like them, one plate is not enough... darn kids eat more than we do sometimes! But seems that at the Yellow Door we can all stuff ourselves for 500 Baht. We'll be back soon, very nice little place.

Update August 2017. We still eat here and like it! Still low prices and tasty food, and it's a fairly regular place for us! There's now another interesting place next door called The Camp and next to that is We Cafe.


You have been reading : Yellow Door Restaurant in Phuket Town