Right in the heart of old Phuket Town housed inside 2 buildings you can find the Peranakannitat Museum (also called the Baba Museum), which was officially opened in May 2017 by Princess Maha Chakri Sirindhorn, but then soon after the grand opening it closed again mainly because the items on display for the visit of the princess were all borrowed from local Phuket people, and not permanent museum exhibits! I have checked now and then over the last year and a half to see if the museum is really open, and finally last weekend - yes, it was! I'll start by saying - it's still under development, but it does have 2 definite plus points - free entry and aircon! 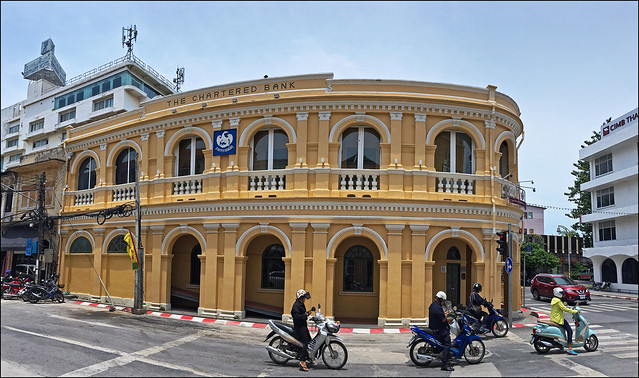 The main entrance to the museum is on the corner of Phuket Road and Phang Nga Road (see map at the end of this blog post). This building was originally the Chartered Bank, built around 1900 I think, just when Phuket Town became the main town on Phuket Island and the tin mining industry was booming. It was the first bank in town and the police station was built directly opposite (the building with the clock tower). There's no huge "MUSEUM!" sign anywhere ... I was not sure it was open, even though an "OPEN" sign was hanging on the door handle ... 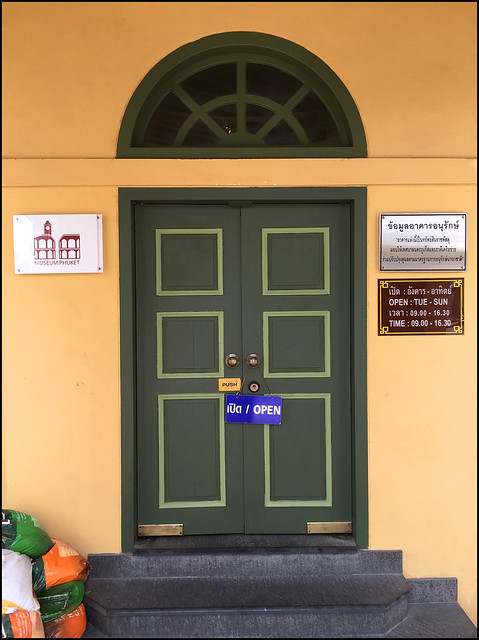 I opened the door, happy to feel aircon on a hot, hot day. Inside the room was largely empty save for photos of the princess on the wall and a couple of (quite impressive) displays of old Chinese style tableware. And on the far side of the room a desk and several surprised looking young ladies, a couple of whom were dressed in olde Baba / Nyonya style clothes. Oh my goodness! A visitor! One of the young ladies spoke decent English. I signed in to a visitors book, was given an information brochure and was happy to hear that there is no entry fee. I had a quick look at the displays in the main room (which would have been the ground floor of the bank). 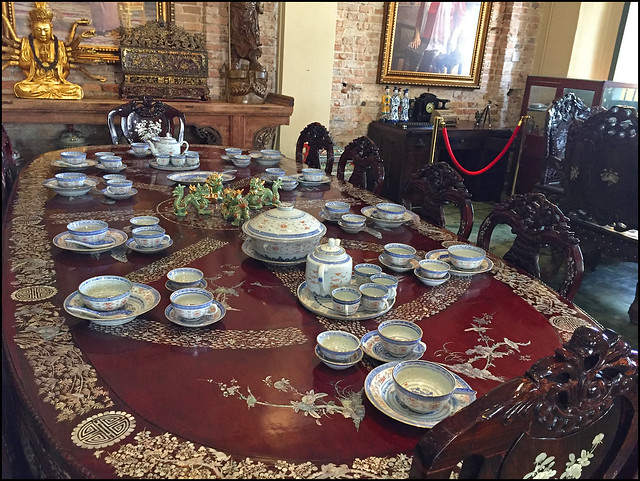 Behind the desk is a back room that was originally the bank vault. Inside is a small collection of jewellery and some explanations of what the jewellery is/was for. 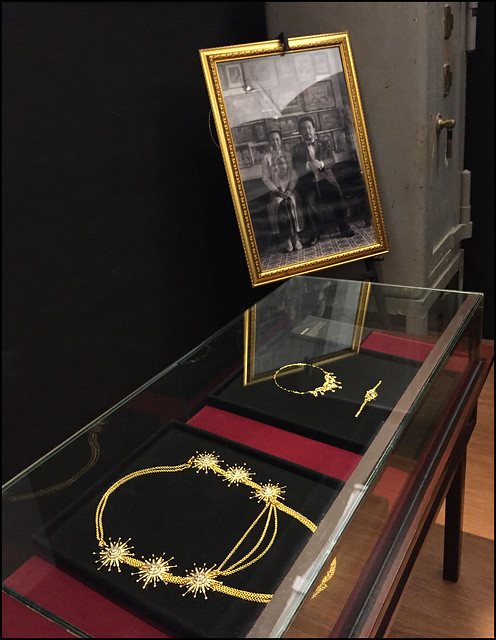 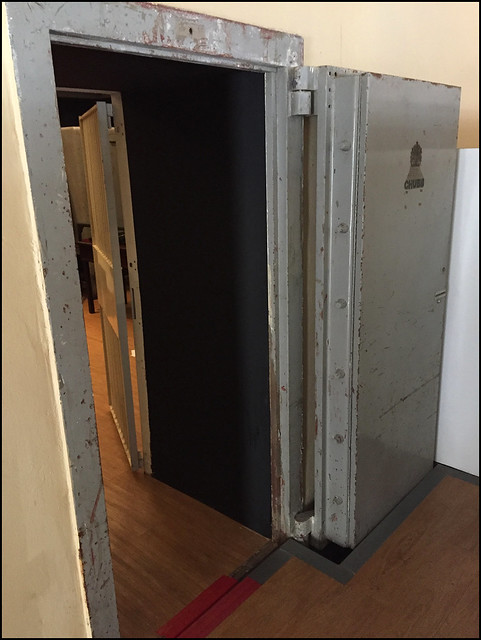 (above) Gold jewellery on display in the former bank vault of the Chartered Bank.

I should explain a few of the meanings of words ... Peranakan is the name given to people of mixed Chinese and Malay decent. By "Malay" I don't mean "from Malaysia" but "from the Malay peninsular". In the early 19th century many Chinese left Southern China and settled in places like Singapore, Malacca, Penang and Phuket. The majority of the Chinese were male and many married local ladies. Phuket had a huge influx of Chinese at a time when the tin mining industry was taking off. The names Baba and Nyonya are also used - Baba are the men, Nyonya are the ladies. There is a big Baba Wedding ceremony here in Phuket every year which I have attended a couple of times.

So I was informed by the museum staff (volunteers, I guess, since it's a free entry!) that an Audio Visual presentation would start at 1:30pm on the 2nd floor of the museum. The presentation takes place 5 times per day at 10am, 11am, 1:30pm, 2:30pm and 3:30pm. Every day except Monday when the museum is closed. Well .. I was there at 12:30, so had an hour to kill walking around old town and finding some cheap local food for lunch. Plenty of cafes and restaurants around old town. Back at the museum, I was taken upstairs - just me! A good view from the 2nd floor looking over the road to the clock tower - the building used to be the police station in the early 20th century ... 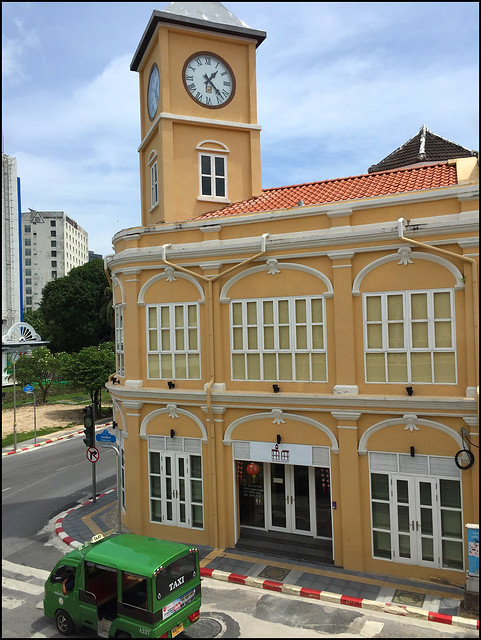 The "audio visual" presentation took place in several small rooms. One of the volunteers guided me, and several Chinese tourists who also turned up to watch halfway through the first part. It started well with a film showing Chinese heading away from war torn South China to seek their fortune and ending up in Phuket after many weeks at sea. 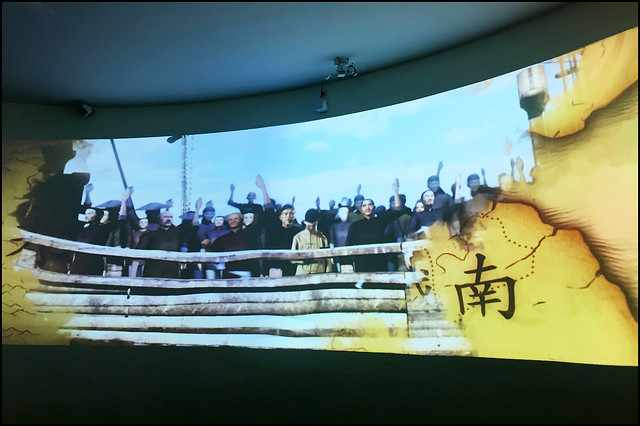 The second part might have been good but the sound was not working - showing the Chinese settling in to Phuket and having families. Then we had a display showing family life in a typical shophouse style house with the skylight in the middle, followed by small displays about Nyonya clothing and some local foods. It maybe needs a little more work, maybe more signs explaining things, but anyway ... free entry and aircon! 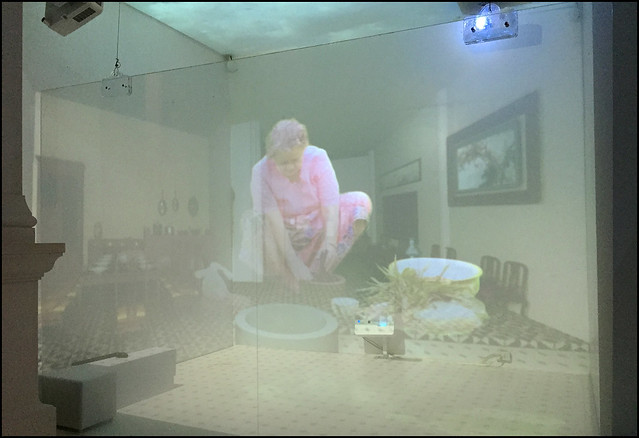 (photos above show parts of the audiovisual display)

And that was about it .. for now. Over the road in the clock tower building, work is underway with some more presentations of photos and information. I think I'll head back next year and see what's been added. I'm a big fan of museums although I do realise most people visit Phuket for beaches and museums may not be top of the list of things to do! But my Phuket blog does try to suggest more than just the usual attractions, and I do recommend looking around old Phuket Town and so .. why not have a quick look at this museum while you are there!

NOTE - there is another place by the main road in the north of Phuket called the Peranakan Museum, quite a big place. I might check it out soon, but as far as I know it's just a couple of rooms of displays and then some souvenir shops and a restaurant .. a place for bus loads of Chinese to browse, I suspect. (website here)

More places to visit near the Peranakannitat Museum

You have been reading : Peranakannitat Museum (Phuket History) in Phuket Town