UPDATE APRIL 2017. Due to land disputes, it seems that Laem Sing beach is temporarily not open to the public.

Just a couple of weeks ago, we took an afternoon family drive up the west coast of Phuket. The idea was to stop at a few beaches that we'd not seen for years. Yes, I said years. Phuket is a big place, we do have a few favourite places by the beach, but generally we're not a beachy family. We drove through Kamala beach, and stopped at Surin beach. In between Kamala and Surin there is another, much smaller, beach called Laem Sing (or Laem Singh if you want to spell it like that). There's a viewpoint on the roadside where you get this amazing view of Laem Sing. The west coast of Phuket has a lot of beautiful views. 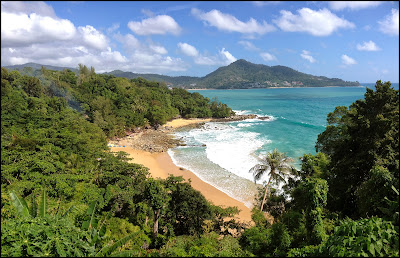 Many years ago, back in the year 2000, my wife and I (before we were married) used to ride our scooter up and down the coast quite often. Back then we never visited Phuket Town, we took days off and headed south from our room in Patong to Kata or Rawai beaches, or north to Kamala and Laem Sing. 14 years ago, Laem Sing had zero development - no bars or restaurants, just a few beach chairs and maybe a couple of people with coolers of drinks for sale. OK, it was low season when we visited, but it seemed like we had the whole beach to ourselves. The photo below shows a much younger me on Laem Sing beach all those years ago. 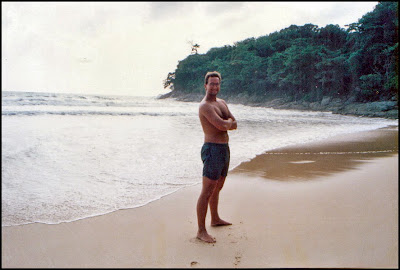 As years rolled by I was aware of websites promoting Laem Sing as "the unspoiled beach". And so it became busier, and I knew that bars and restaurants were opening there. Thankfully there is no space for a hotel. And somehow, we never went again. Preferring to keep a memory of a beach in Phuket with nothing but sand, sea and surrounded by jungle. We realised that we'd not visited Laem Sing for 14 years! So, after stopping at Surin beach we parked in the small parking area above Laem Sing. The sign needs replacing ... 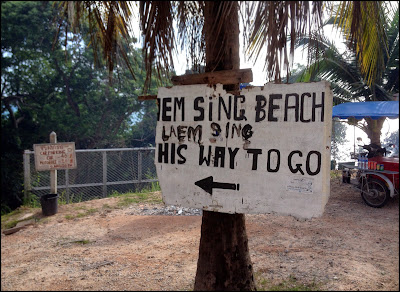 And then a walk down the steps to the beach. Not a long walk, but on the way back up you're going to be breathing hard! 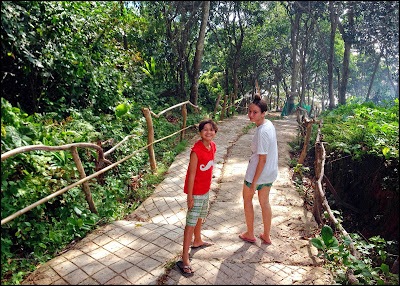 So, right now Laem Sing beach is going through some changes along with all the beaches in Phuket. The rules are suddenly being enforced. Rule 1 : No building on the sand. The beach is public land, not private, not to be used for profit. And so all up the west coast the bars, restaurants, massage huts, beach chairs are being removed. The beaches are being made more natural again. I am sure this is temporary. Local people will make deals and yes, in a touristy place like Phuket you need some beach chairs and drinks for sale. When we got down to the beach we found (on that very day) the beach huts and bars being removed or burned. (This means I better go back in a few months for an update!) 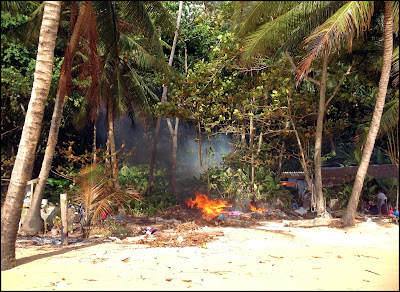 But looking out to sea, pretty much the same as 14 years ago! I would hope that if we visit Laem Sing again later this year, we'll find maybe a few snack stalls and drink sellers, but no large restaurants. Or you can just stop at a minimart on the way, get a few drinks and some ice and enjoy the beach.

(above) Looking out to sea from Laem Singh beach (panorama) 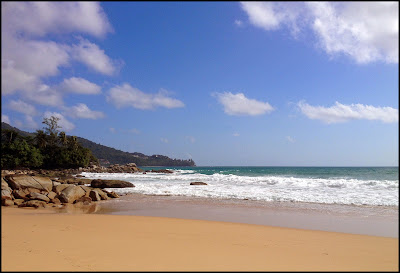 (above) Laem Sing looking south (Kamala is just around the corner)

Hard to believe that I can live on a small island and not visit somewhere for 14 years, but .... Phuket is not so small and well, I am not on holiday here, mostly working 5 - 6 days per week. More time would be nice. Laem Sing (after the "clean up" is cleaned up) should look something like it did many years ago. Back to being a place to visit if you want the unspoiled beach. If you want busy, there's still Patong for you!

You have been reading ... Laem Sing Beach north of Kamala Beach

Go to the top of the page to search the blog and read the blog menu ...

See You in Phuket!