Last week we took a trip for a night to Khao Sok National Park, staying again at the Cliff and River Jungle Resort which has become one of our favourite places to relax for a couple of days. Khao Sok is well known for hiking, boat trips, rafting, elephant treks, bird spotting and more. I admit that we just head to the hotel pool to chill out and eat in the very nice restaurant. We have done a boat trip on Chiew Lan Reservoir before and would like to do that again sometime, but we'll skip the hiking and white water!

On the drive back from Khao Sok to Phuket the road goes via Takua Pa, a small town which is not far north of Khao Lak with all it's hotels. Just before reaching Takua Pa the road splits north towards Ranong, and it's along this road that you find Sri Phang Nga National Park. It's about 30km from Takua Pa heading towards Kuraburi which is about the only major town between Takua Pa and Ranong. We'd decided to check the park out on the recommendation of a friend who'd posted some nice photos on social media of rivers and a pool full of fish - and she told us you can jump in with the fish! Sounded interesting enough for a 30km detour. Sri Phang Nga National Park was easy enough to find, very well signposted and good roads, though the road that led to the park from the main highway was quite narrow in places. I did for a minute or two wonder if we'd wasted our time! 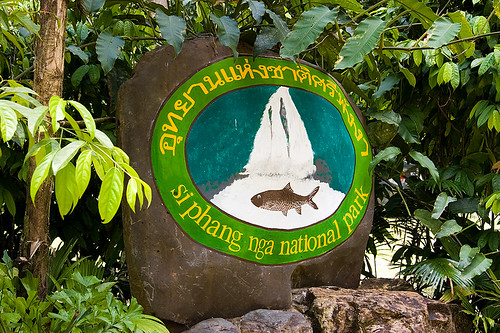 The park entrance was very tidy and well kept. We were charged only 100 Baht for the whole family to come in. Plenty of parking and we could see a small restaurant, plus we found some very clean bathrooms (with big mosquitoes!). There was also a large grassy camping area and some national park huts to sleep in too. Looked good and we had not seen any rivers or fish yet! And it was quiet. We saw a few other cars, a couple of people. I had read that Sri Phang Nga was quiet. Seems to be true. We like quiet! Now, at the main entrance/restaurant, a sign said that the nearest waterfall and the fish pool was 1.5km away. We reeled in horror at the prospect of such a hike! Luckily you can drive that far along a bumpy dirt road. At the end of that track we found a few more cars, a little river full of fish and some young girls selling fish food at 20 Baht per bag. We went directly to the nearest water and started throwing food to the fish. I decided that I could wade in the shallow water - cool and refreshing on such a hot day. We already decided that next time we're coming ready for a swim! OK, so lots of fish, cool water .. I threw food around my legs and the fish swarmed - very tickly! I encouraged the kids to do the same. 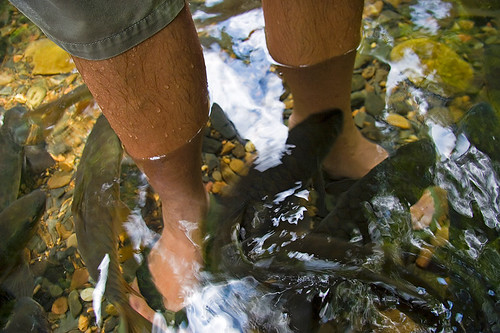 I then noticed a "NO WADING" sign right by the river. Oops! A little further away was a deeper pond with a "NO SWIMMING" sign. Hang on.. our friend had told us that you can swim here... So we went for a little walk. A sign pointed to Tamnang Waterfall only 500m. Let's try this way. We walked through the jungle, rather like a walk at Kathu Waterfall or Ton Sai Waterfall in Phuket. 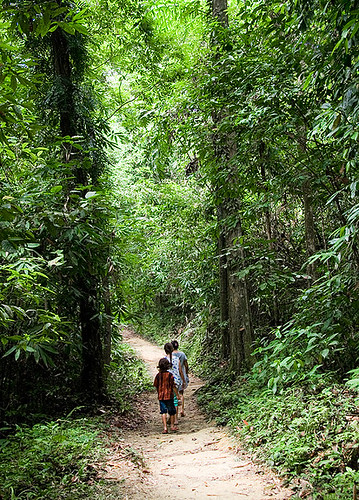 Tamnang waterfall (according to the official national park website) is 63 meters high. Not sure it looked that high, but anyway .. taller than any Phuket waterfall! I was impressed and happy to find only 3 other people at the falls, all wading in the water. I got the feeling they had been very happy to be the only 3 people there... we came along and shattered their peace! They left soon after we arrived.. which meant that we had Tamnang waterfall to ourselves :) 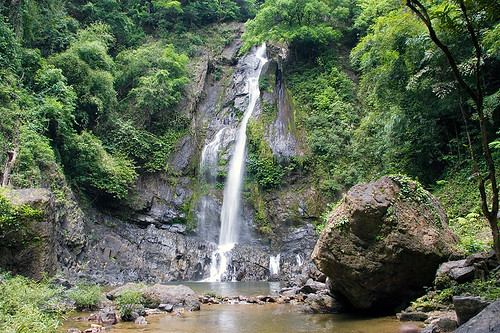 Now, downriver from the waterfall, there were pools where fish were swimming, and in the main pool under the falls, the fish were everywhere. The water was fresh, cool and clear. Yes, next time we'll come with swimming clothes. Well, my dear wife took the plunge anyway. A bra is the same as a bikini? Well, if nobody else is around, yes. I was happy paddling.. well actually it was a hot day and I should have just leapt fully clothed into the pool, but I am not so anarchic! Me and the kids just carried on feeding the fish. 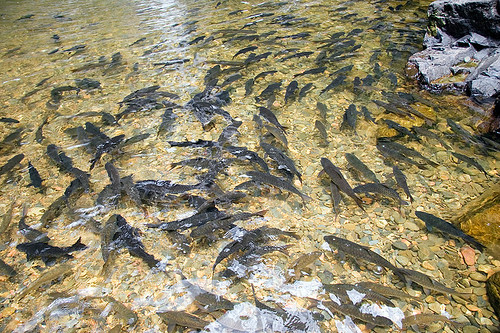 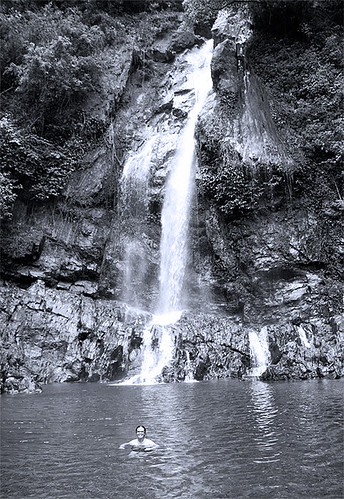 We had our own private waterfall! The other waterfalls at Sri Phang Nga are a bit more of a hike (not far actually, just 2 - 3km). Next time maybe we'll be ready for a hike and a swim. This was a bit of a discovery. Kids loved it. They do like a bit of nature! Having the fish swimming all around us was cool... with that slight hint of danger - will they perhaps decide to bite me? Kids were unsure until dad was already in the water surrounded by fish. 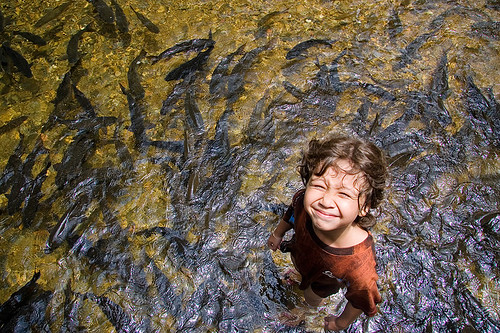 After half an hour at Tamnang waterfall, we got this kind of "we could stay here all day" feeling, except we were on the way home, and to drive home would take about 3 hours. Back at the main entrance, we ate at the restaurant, cheap and tasty Thai food, and asked about the accommodation and were told its just 420 Baht per night to book a hut with 4 beds (no aircon!) or 600 Baht at the weekend. We'd not try to visit as a day trip, a bit too far, though if someone was staying in Khao Lak, a day trip would be easy. Next time we'll stay overnight and go throw ourselves into a pool full of fish for the day! Happy to have found Sri Phang Nga and we'll plan a weekend trip sometime in the near future.

UPDATE - some photos taken in 2013 - the Tamnang Waterfall was much more impressive after lots of rain, but we could not swim under the falls, a ranger accompanied us to the falls to make sure we stayed safe! 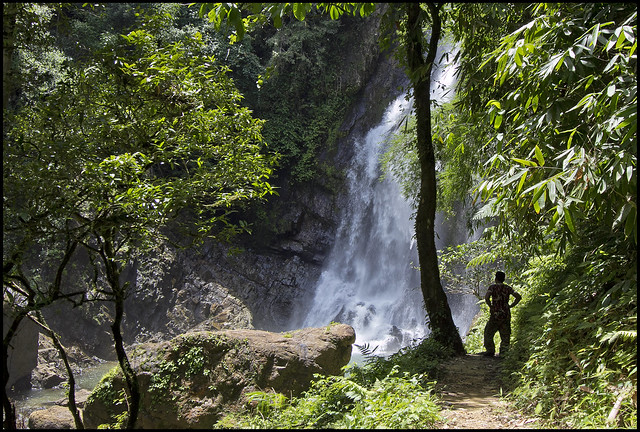 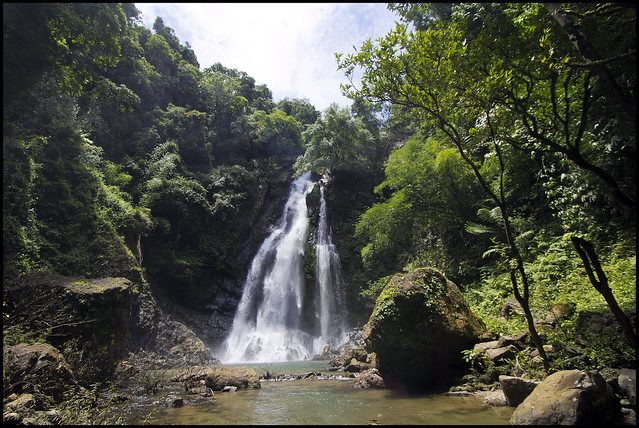 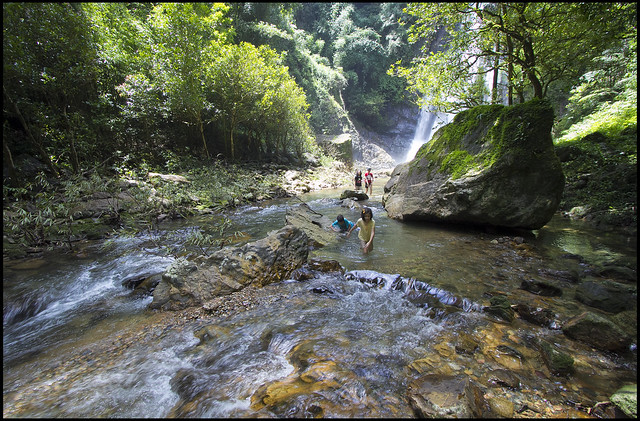 
You have been reading : Sri Phang Nga National Park