During 2016, art was appearing all over Phuket Town, and a few other spots around the island too. I am not quite sure if this is something organised or government approved, but it's happening and, in my opinion, adds something extra to the town although I'd not want to see the prettier streets in the old town messed with too much. Thalang Road, Krabi Road and Dibuk Road for example still have many older shophouse style houses and businesses and this area has already undergone a lot of restoration in the last 10 years with plenty of repainting, the removal of overhead wires and lots of nice little cafes and bars opening which mix with old shops selling hardware, Muslim fabrics or Chinese herbs. I really like the old town area and wish I had more time to wander around taking photos. The first street art I noticed was about 4 years ago on the corner of Thalang road and Soi Romanee, very much the heart of the old town. This amazing face was very striking ... 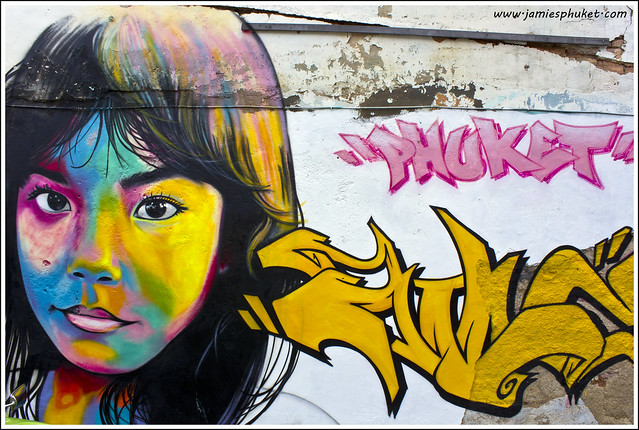 It was painted on an old crumbling wall by a French artist called Noé Two. And right away it became a focal point for photos, selfies and Facebook fans! The face stayed there, slowly crumbling over the last few years until it was painted over a few months ago. On this particular wall, it enhanced the environment. But quite a few streets in the old town look like the photo below, taken on Dibuk Road. I hope buildings like this can be left as they are. 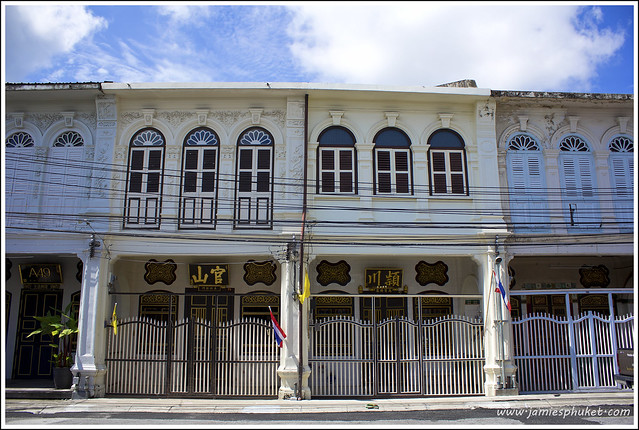 All this new art started appearing in April 2016, with various artists involved such as Alex Face, Rukkit and Liudmila Letnikova. I don't know all the names of the artists. It seems to be part of a locally organised idea called the F.A.T Phuket Project, meaning "Food, Art, (old) Town". I saw some photos appearing on Instagram just as I went on holiday after Songkran.

After the death of King Bhumibol in October 2016, a new mural was painted on a wall along Dibuk Road just to the west of Wat Monghkon Nimit. There had been some rather bizarre graffiti / art here before, but that was painted over. Now we have this very nice mural ... 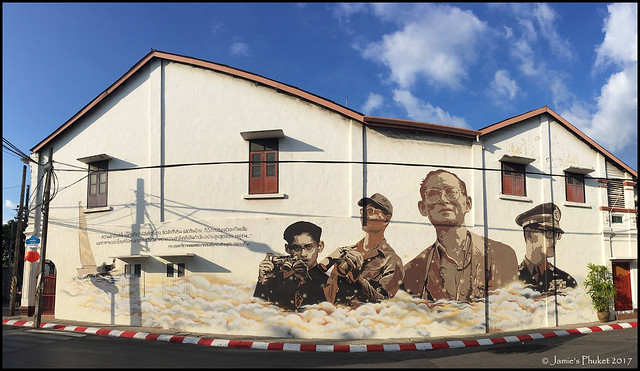 So, with the art having been there for a couple of months, I finally had some time to have a look. We all headed into town one evening, not long before dark, had a good look around trying to find all the art we could, but the light was not great for photos, so I went back with the kids a few days later just after lunch for another "hike around town with Dad" :) They love it really. We started at Krabi road near the Thai Hua Museum. Close to the museum, on the south side of the street is an alleyway that leads down to the main market on Ranong Road. And just after the narrow alley you find this ... 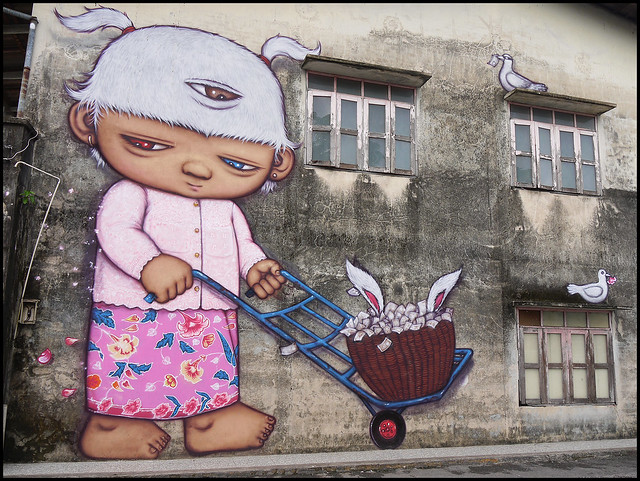 Nicely brightens up a slightly dirty street. And directly opposite there's a little something too ... 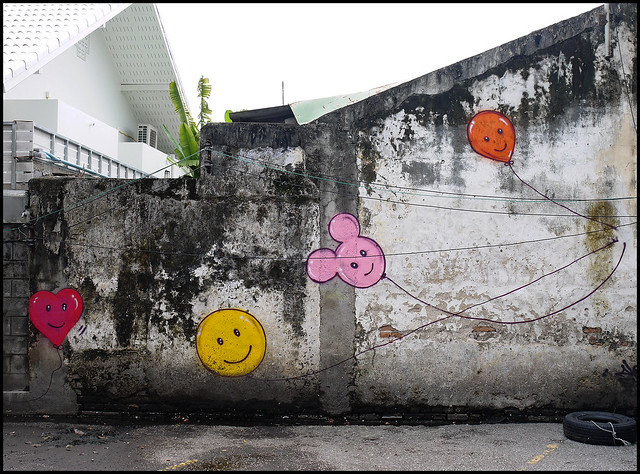 You could certainly argue that the whole wall needs a repaint, but it's the juxtaposition of the new art and the old walls that is so great. We carried on past the market and headed to Phang Nga Road where you can find a couple of art galleries and the old (but refurbished) On On Hotel. Just about opposite Southwind Books (a very good secondhand bookshop) there are a couple of local characters painted on another wall that could do with a full repaint :) 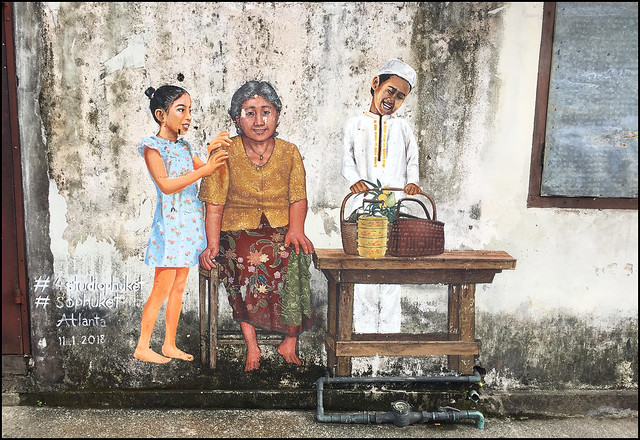 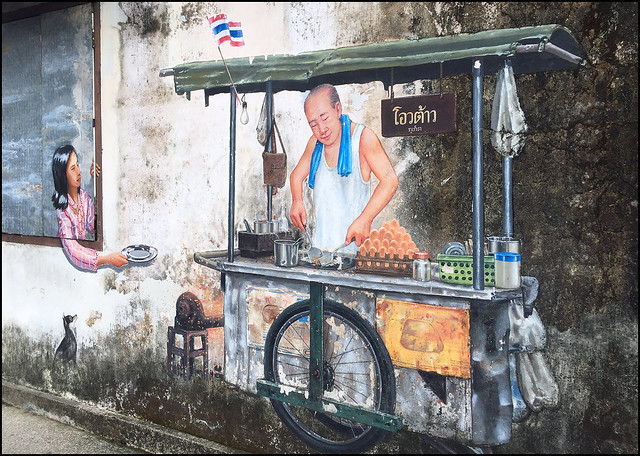 (above) Art on the wall, Phang Nga Road, Old Phuket Town. Just a few meters further along the road, but on the other side, is the entrance to the Sang Tham Shrine, a Chinese shrine built at the end of the 19th century in between the old shophouses and, until a few years ago, devilishly hard to find! The entrance was smarted up and widened in 2013. There's a lovely painting a few meters inside the entrance ... 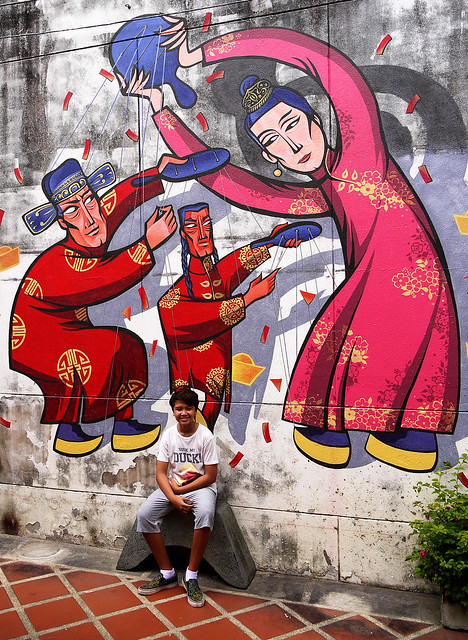 (above) Art at the Sang Tham Shrine

All along Phang Nga Road there are paintings on walls. Just a few meters from the shrine is a big building that used to be a bank. It's been empty for as long as I can remember. Someone has painted a lion here! 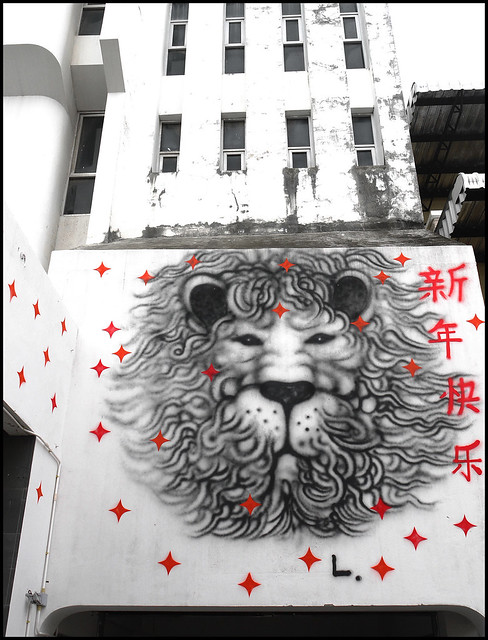 After the On On Hotel, there's a yellow building called Pengman ... another old Chinese/Thai business. It's a very popular noodle shop with a cheap hotel in the back. And a big slice of art along the side wall of the building, very hard to fit into one photo! 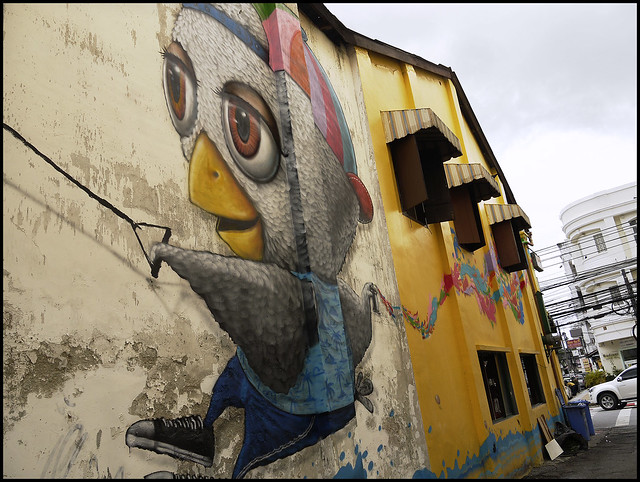 This one was painted by local artist Mue Bon. Certainly brightens up that alleyway, bins and all. And not far along the same road you come to the Sinthavee Hotel, one of the older hotels in town dating back to the time before mass tourism. And they've got a giant tiger outside :) 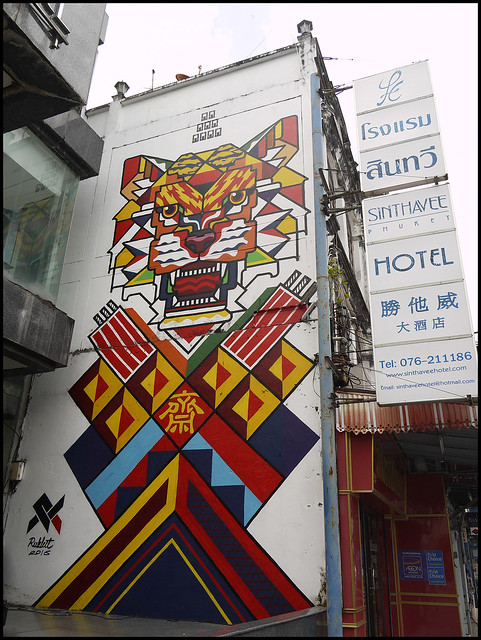 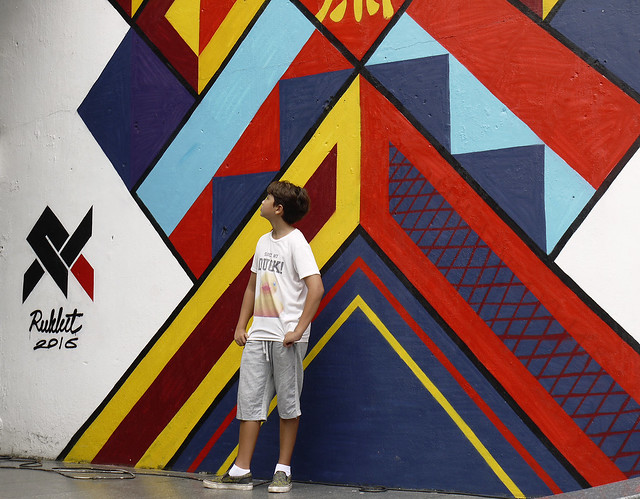 There are a few unexpected paintings and I am sure we did not see everything yet. Just along from the Sinthavee Hotel is an alley leading to a carpark. A bit dim and dirty .. well, it used to be! 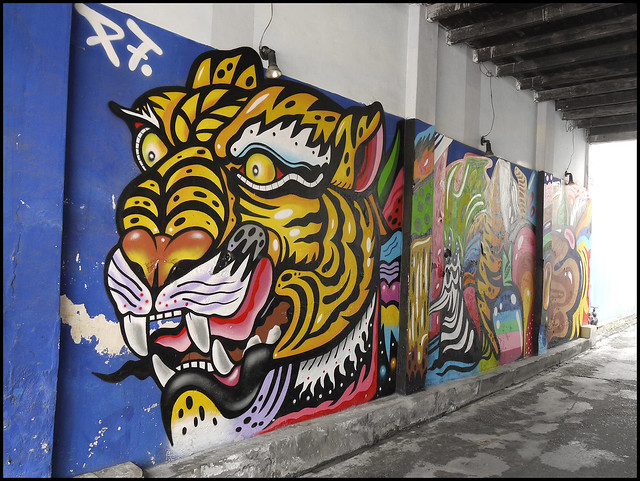 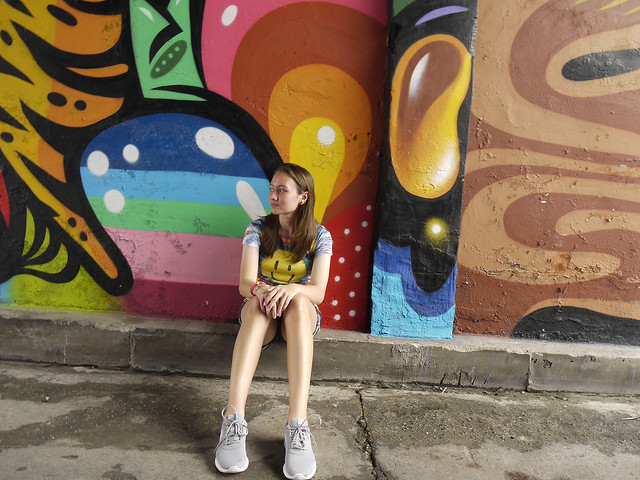 At the east end of Phang Nga Road at the intersection with Phuket Road, a couple of the more iconic buildings in town are being renovated - the old police station with the clock tower and, on the opposite side of the road, the old Standard Chartered Bank building, which was the first bank to open in the town - and the bank also financed the police station, much needed to deter robbers in the (at the time) fairly lawless mining town! The bank building is being turned into a museum and I have been waiting a fair while for news of it's opening! One other artwork was painted on this building, but had to be removed, which is maybe fair since it's already being renovated and is an important historical landmark in the town.

So at the end of Phang Nga Road, we turned left, then left again onto Thalang Road. The only new art along Thalang Road, which is pretty much a work of living art anyway, is found at the corner of Soi Romanee - as mentioned above. The beautiful girl's face that was painted in 2012 had all but peeled off anyway. And now you have this ... 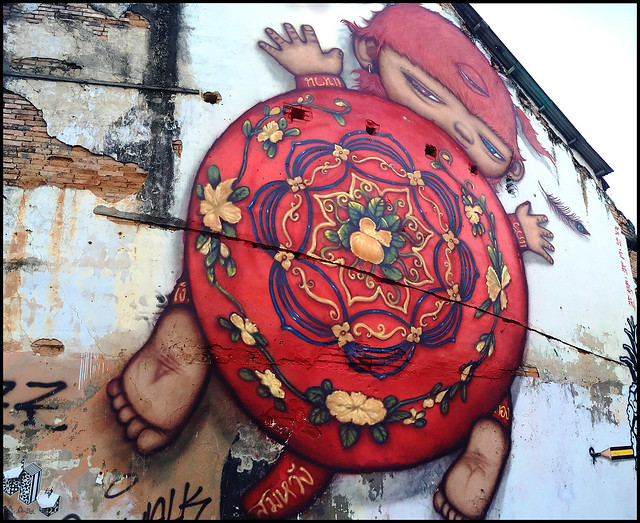 And it's a very popular spot for a photo. There's a wooden bench underneath. But hard to get a good photo - need a wide angle lens. Plus, right next to it, you have this amazing bird ... 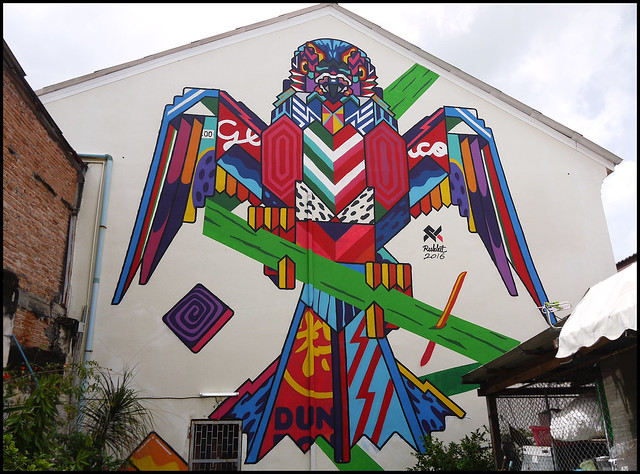 Hopefully the old town folks will allow all this art to stay .. maybe some more will appear. There have been various projects over the years to make the old town prettier. I can say that when I first went exploring these streets 10+ years ago it looked quite run down, like nobody really cared. But now things look way better and there are still works planned to bury more cables and events such as the Old Town Festival now take place every year to showcase the area.

Our little walk around took over an hour, and I promised my daughter a lemon and honey soda at the Bookhemian Cafe, a cool place with lots of books and art on Thalang Road! We all had a drink and a rest there before heading home. Dad and kids enjoyed the walk :) 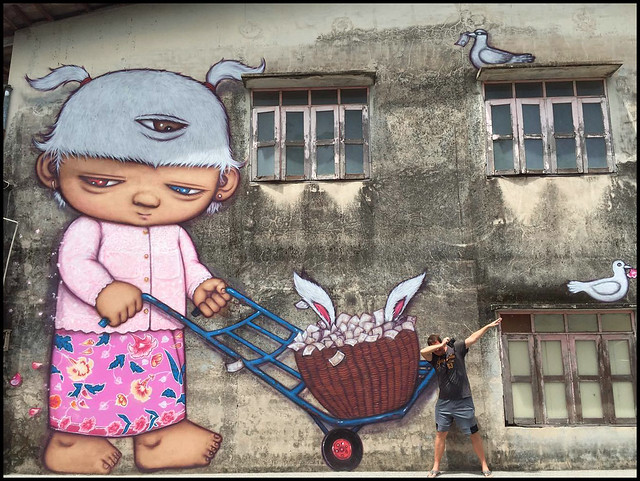 UPDATE 2018 - More art was added around town in early 2018 for the Old Town festival so I have been out looking for all the new art. Some of it is easier to find, some is hidden on small side streets, but I think it all adds together to make the old town more attractive. 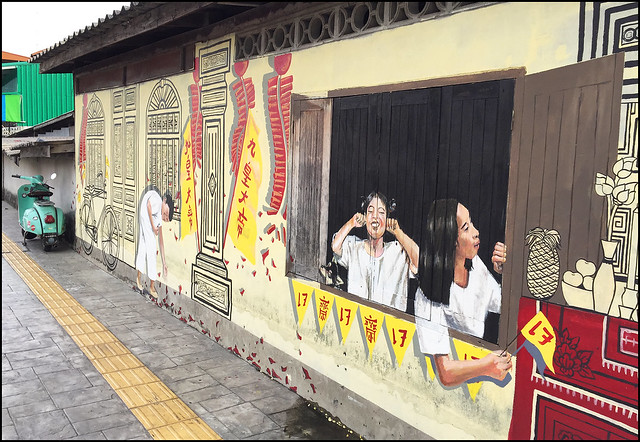 (above) This mural is at the west end of Krabi road, on the corner of Patiphat Road depicting kids cheering on a vegetarian festival procession with exploding firecrackers. 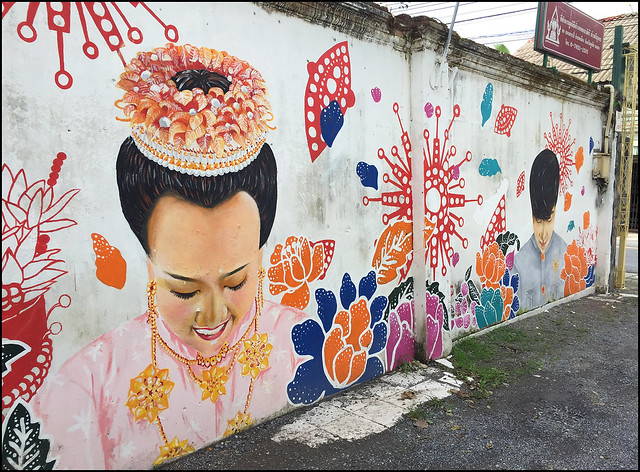 Further east on Krabi Road, this painting above is found on the wall of the narrow road leading to Chinpracha House (an old mansion which you can visit). 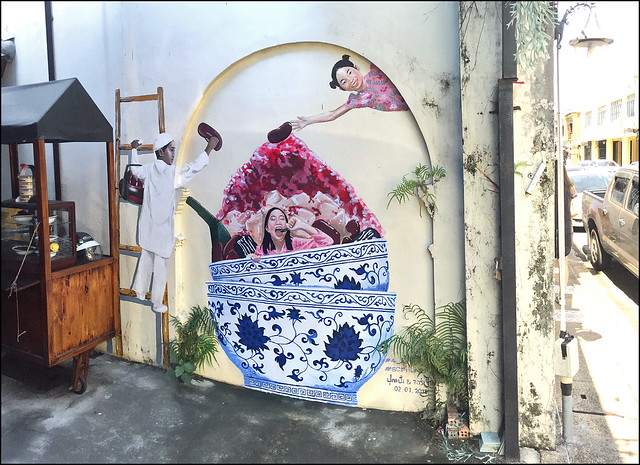 And (above) a little further east along Krabi road this painting of kids and traditional desert is found just inside the entrance to a cafe next to the Thai Hua Museum.

And there is more art along the alleyway leading to the Sang Tham Shrine ... 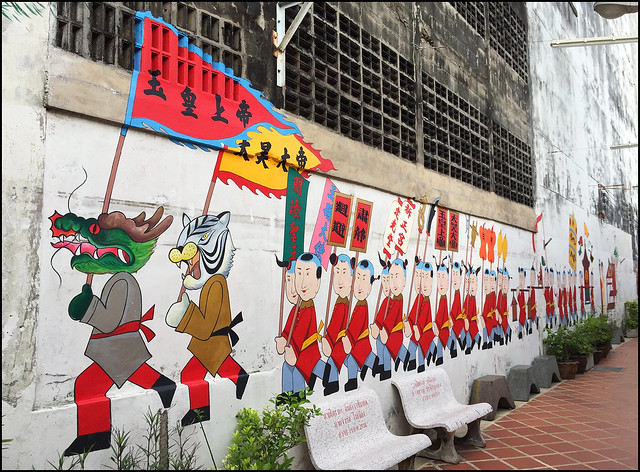 And then, wow - a really spectacular painting depicting a girl falling into water surrounded by images of local deserts and snacks .. this one is found on a tiny side street on Ratsada Road close to the traffic circle and the market. Could look at this one for ages. Enjoy the art, everyone! 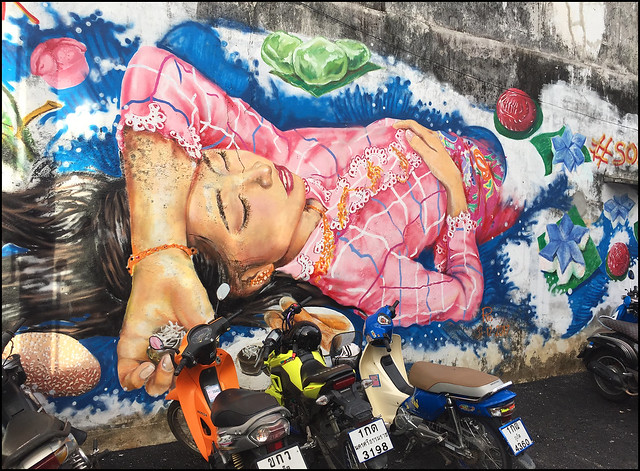 You have been reading : Street Art in Phuket Town