4 years later, I don't really know what to write, but want to write something. What happened on December 26th 2004 was something quite unimaginable, off the scale, almost impossible to believe (unless you were right there). I did not see the tsunami, my family was safe at home, all we saw were the after effects, and most of what we saw was on the TV... even though you might think we were right here in the middle of it all here in Phuket! In fact, people think of the Phuket Tsunami largely because many parts of Phuket were lightly damaged and all the news crews and TV crews stayed here in Phuket! Nearby Khao Lak and Phi Phi were much harder hit. Phuket is a big place and only narrow coastal/beach areas were hit. The photo above shows Kamala temple, at Kamala Beach Phuket as the tsunami hit. Kamala was one of the worst hit areas of Phuket. We'd been there on the 25th with friends, having a drink at the beach, kids playing around. One day before the tsunami. My wife was 9 months pregnant... our son was born in early January 2005. A lot of "what if's" were in my head for a long while after the tsunami. When I see this photo it reminds me that we are very lucky. 4 years later, as I write this, I don't dwell on the "what might have happened", but am very happy to have my family. As I sit by the computer, my boy (nearly 4 now) and my girl, now age 7, are racing round the living room on their Christmas presents - a couple of scooters. It's well past their bed time, but for today, I don't want to tell them "Go to Bed!" - I am happy to watch them having fun.

4 years seems like a long time, but also but a blink of the eye. Hard to believe my boy is nearly 4 years old. He doesn't know anything about the "Phuket tsunami". My daughter has some idea. I tried to explain a bit today about what happened and she was very relieved to be alive. This year, 4 years on, the tsunami seems like a surreal dream. In Phuket you certainly can't see any physical effects. Khao Lak (last time I went there) looked very neat and tidy. I want to take another visit soon. Phi Phi also is all cleaned up and new - in fact some of the clean up was very very quick. 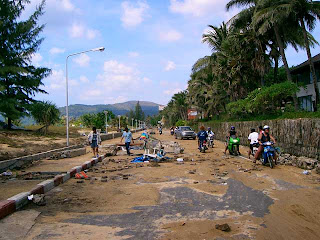 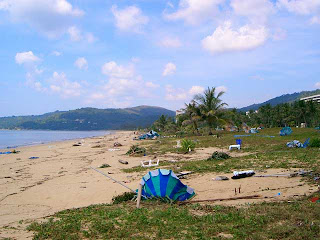 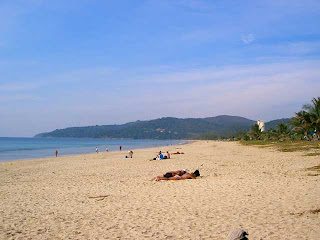 Actually, Karon Beach was not hit hard in comparison to other places. And since it was what I saw first, I kind of thought (or hoped) that things were not too bad. We got news from Phi Phi and Khao Lak later, and news from Aceh, Sri Lanka... many places. I took a walk along Patong beach next day... 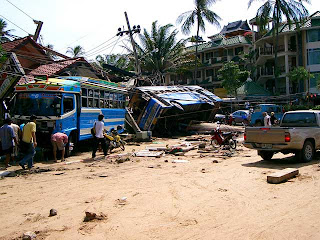 4 years. A lot happens in 4 years. On December 31st 2004 we had no party, we lit some candles in the garden and a few tears were shed. I have to say it was a very very sad time. Replaced by happiness on January 11th 2005 when our son was born. At this time the future's so bright I gotta wear shades. Kids are still riding around the living room on scooters. Bless 'em.

There have been some interesting stories in the news about the tsunami recently. One talks about coral regrowth in damaged areas.. another hints at tsunami recurrence times of about 600 years based on studies of soil layers in affected areas.

I think this will be the last time I try to write anything about the tsunami. People keep asking about it. Today I have told the same story to customers several times. I don't want to be rude, but OK, it was 4 years ago now. Yes I was here. No I was not directly affected. We saw nothing really nasty. I did for a while feel guilty about being so close to it all, and yet not losing anything or anyone myself. Time now to get on with life.

Previous ramblings about the Phuket tsunami:

Just 2 weeks until my son's 4th birthday. And just a few days until New Year.. and we will party this year!

Oh, a final note.. I saw just a few days ago, just before the 4th anniversary, that Oxfam had announced the end of it's tsunami relief program. There is a locally based charity still involved with long term relief, though they also have nothing now to do with "tsunami relief". I somehow feel attached to it, as the 4Kali charity was set up by the family of a girl called Kali who died on December 26th 2004. She and her family were originally booked by me on a dive trip, but had to cancel due to their son suffering a bad accident where he broke his neck. The family came to Thailand anyway for their holiday. The local director of the charity was a neighbour of ours too.

Happy Holidays, Happy New Year and I hope to see you in Phuket soon


You have been reading : Phuket Tsunami Memories