Football is very popular in Thailand, although the national team has never done anything much though they have won the ASEAN football championship, but have never qualified for the world cup finals. But the TV in Thailand shows English, German, Italian, Spanish football and more. As in many countries in the world, football is a good conversation starter. You'll find plenty of Man Utd or Barcelona fans in Thailand, but the Thai league is also popular. I mean, not in the same league as big European countries, but popular nonetheless. Thai Premier league games can get crowds of over 20,000.

Phuket FC play in Division 1, which is a step below the Premier league. I went to watch Phuket a couple of times when they were in the regional Southern league, and blogged about it a couple of years ago - see Watching Phuket FC. They got promoted to Division 1, but last season was a bit of a mess, Phuket seemed to run out of money and supporters turned against the people who run the club. Now there is a new sponsor, who also owns the big Kata Group of hotels. And so ... we went along to a game last weekend, mainly because our son plays football with the "Kata Group Academy" and for this game he was going to be one of the kids walking out with the teams before the match :) 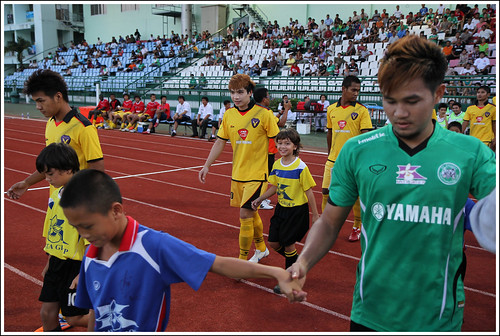 Thanks to Dane, who was there taking photos for a local paper, for taking some pics of our son. You can read a match report with Dane's goal action photos here.

Phuket fans were hopeful of a win here, against bottom team Chanthaburi FC. A win would lift Phuket out of the relegation zone. I would like to think that our presence helped, as part of a crowd of just over 2,000. Our son enjoyed his moment in the spotlight and our kids enjoyed the party atmosphere at the game as Phuket ended up with an 8-1 victory, which I believe is their best ever win! We attended with some friends whose son also plays weekend football with the Kata Group kids team. Of course at such a young age, it's just for fun (our son is only 7) but hey, he might end up in the Thailand team one day! Or maybe the England team, they could do with some decent players! We sat in the main stand, and I wandered to the end of the stand with the kids to join the serious supporters. Here's a short video I made ...

They were silenced after about 2 minutes of the game when the other team scored .. However, did not take long for Phuket to start knocking goals in, and it was 4-1 at half time. The stadium does look a bit empty with only 2000 fans, it can hold way more. If you like football, come to a game! You can find info on schedules on the Phuket FC Facebook Page. Home games normally start at 6:30pm, which is just before sunset at this time of year.

I do enjoy the crowd almost as much as the football. It was great to be here on this evening with Phuket doing so well, and with a new sponsor investing money it was easy to feel a sense of optimism in the air. Next home game on July 7th against Krabi FC. A local derby, should be good! 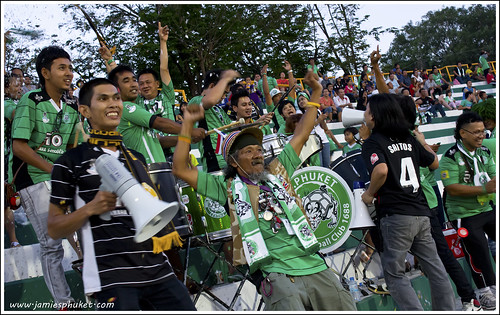 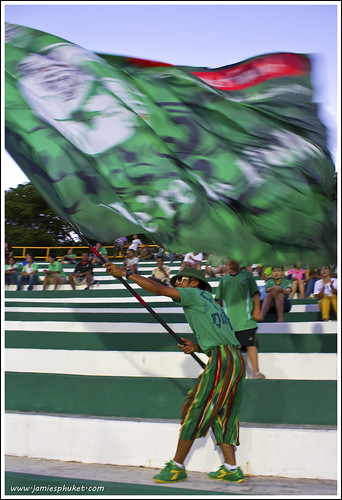 Fun for all the family. At half time, it was beer o'clock! A few drink and snack vendors wander around the stadium selling things like chicken, orange juice and dried squid on a stick .... For anything else, well, you can quickly exit the stadium and there's a minimart just over the road. I ran over there to buy some beers for myself and our friend who's a hotel manager with the Kata Group. The squid on a stick seller made several appearances during the game. I did not buy any, it's not my thing. Very popular Thai snack, but I reckon it stinks! Here's the dried squid man ... 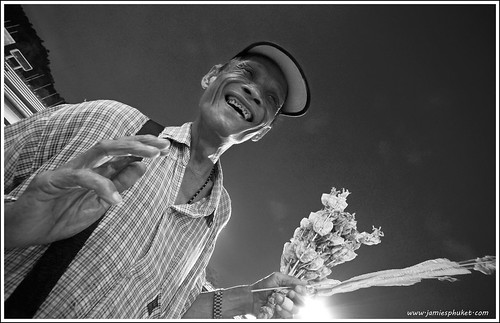 We sat right behind the Phuket FC bench nearer the goal that Phuket were attacking in the second half. 8-1 could have been more than 10 easily, Phuket even missed a penalty. We had a good view of the goalmouth action in the second half. My kids now had little flags to wave (bought at half time, 40 Baht each) and put them to good use :) 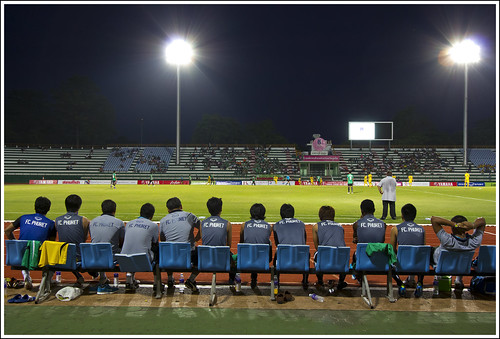 The supporters club just kept on singing ... with a little help. 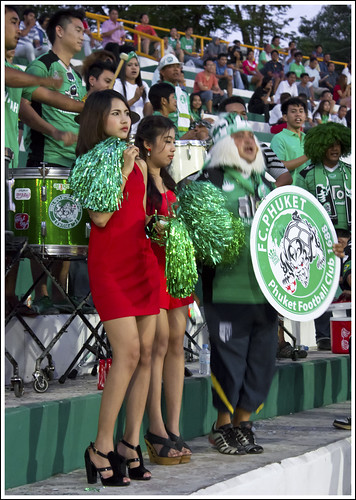 The girls were there selling an energy/health drink "for men" but joined the Phuket FC fans for a while to add some colour (red) among all the Phuket FC green shirts. I should get myself a team shirt before attending the next game. Entry fee is 80 Baht, games are played at the Surakul stadium on the edge of Phuket Town not far from the Central Festival mall. I would not be expecting any more 8 goal drubbings, but the team has some new impetus and my family wants to see more games now! Looking for something different and 'non touristy' in Phuket? Get to the football!

Here's a video showing the goals from the match Phuket v Chanthaburi. Also briefly shows my son and other kids coming out onto the pitch with the players before the game. He was a very proud boy. Hope they can do it again!

Update October 2012 - Phuket had a so-so season, but survived in the 1st Division after a couple of wins in their last 2 games. Hurrah!

You have been reading : Phuket FC - Come and Watch the Football!