Phuket island has been a port and a crossroads of the sea for many years, so it's no surprise that you find a mix of cultures and religions in Phuket. The island has quite a fascinating history. It's location near the Straits of Malacca led to Phuket being a port used by Indians, Arabs, Chinese and Europeans over the years, and this is reflected in the diversity here - now further diversified by many long term expats from all over the world. Right from the start of the Phuket blog in 2006 I started blogging about Phuket's many Buddhist temples and over the years I have also written about mosques and Christian churches in Phuket and even visited a Sikh Gurdwara.

In the 19th century many Chinese people (mostly men) traveled to various parts of SE Asia seeking a new life. They ended up in ports such as Singapore, Malacca, Penang and Phuket. After recovering from wars with Burma in the late 18th and early 19th century, Phuket became important because of tin mining which attracted many Chinese workers who brought their ideas and culture with them. Phuket festivals such as the vegetarian festival and hungry ghost festival started with these Chinese immigrants. Chinese shrines were built all over Phuket. Not sure how many there are in total - I guess more than 20. The Thai word for 'shrine' is SANJAO (ศาลเจ้า). I have blogged individual shrines before. Other shrines I visited only as part of festivals. Here's a few worth visiting ...

Many of the Chinese temples in Phuket are hidden away down side streets or located out of the normal tourist areas, so you might not see any unless you really go looking, but this one is easy to see - as you cross the big hill between Phuket Town and Patong beach, right at the top of the hill, you may notice cars beeping their horns as they pass this little shrine right by the road. 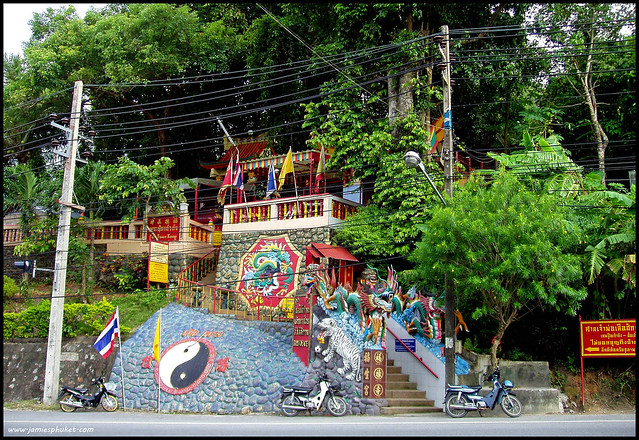 Another shrine that's easy to find, it's right by the main road heading south from the airport towards Phuket Town, just south of the Heroine's Monument. And this is a big shrine. Tha Reua was one of the older communities in Phuket, before Phuket Town even existed. More info and photos - Tha Reua Shrine. 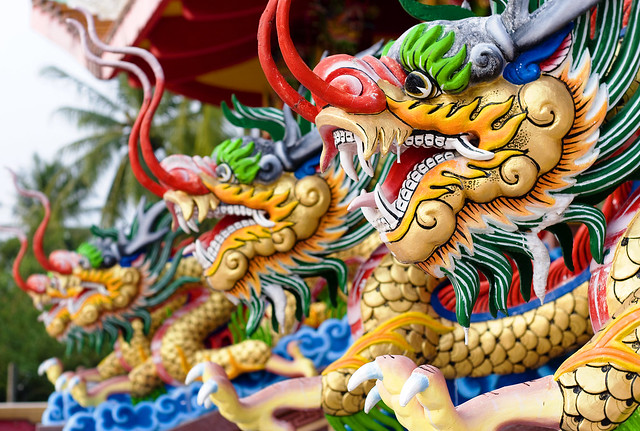 (above) Dragons at Tha Reua Shrine

Kathu is the area in between Phuket Town and Patong. It was originally the center of Tin Mining in Phuket and in the mid 19th century was the center of Phuket business before Phuket Town became important. It is said that the vegetarian festival started in Kathu. The shrine was my local and I attended many festival events here including morning and evening street processions, fire walking, and the "crossing the bridge for purification" ceremony on the last night of the vegetarian festival. 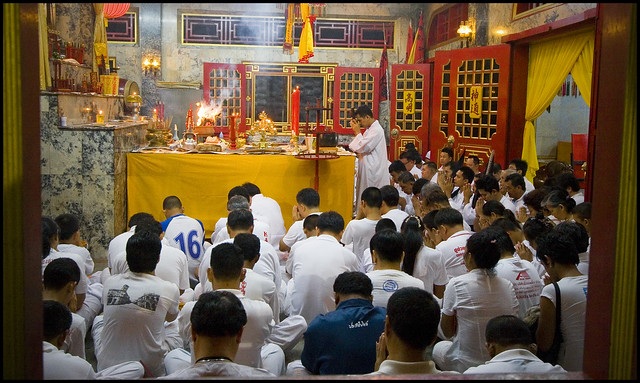 Sapan Hin in the south of Phuket Town is a park and recreation area and where the Bang Yai canal meets the sea. This canal used to be navigable through Phuket Town and even up to Kathu and was very important for the tin mining industry. Almost all of the vegetarian festival processions head through town and down to Sapan Hin. More info and photos - Sapan Hin Shrine. 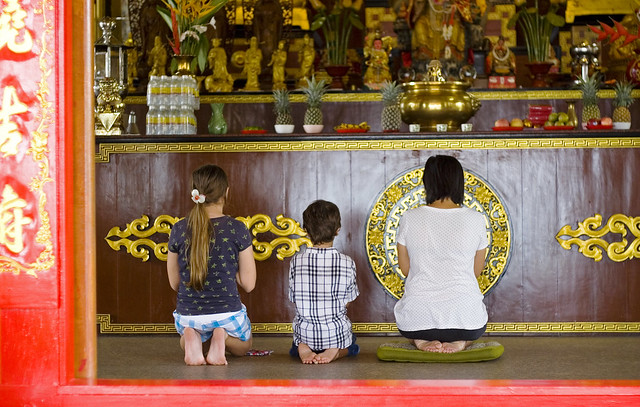 (above) My family saying prayers at Sapan Hin Shrine

A shrine that I had not heard of until checking out the annual Por Tor (aka Hungry Ghost) Festival. It's hidden away down a narrow street in Phuket Town and is the center of the Por Tor Festival. Very much worth a visit if you are in Phuket during that event. 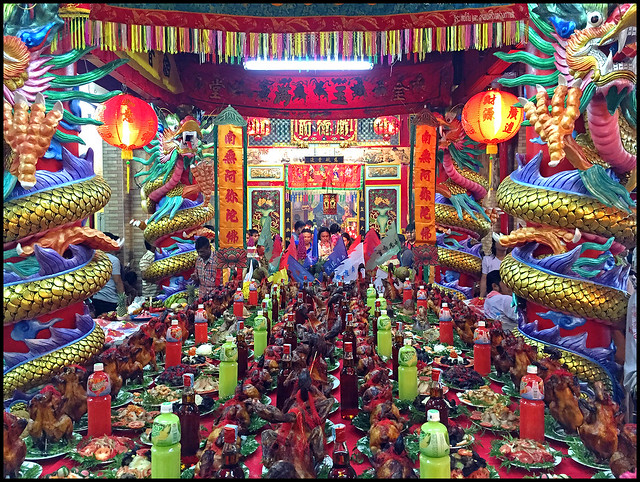 The first time I found this shrine it was very hard to find down the tiniest alleyway in Phuket Town and with a secret pasageway leading to a restaurant on the next street. The entrance was widened some years ago and the shrine made into more of an attraction in the middle of old Phuket Town. Certainly a place to visit while exploring the town. More info - Shrine of Serene Light. 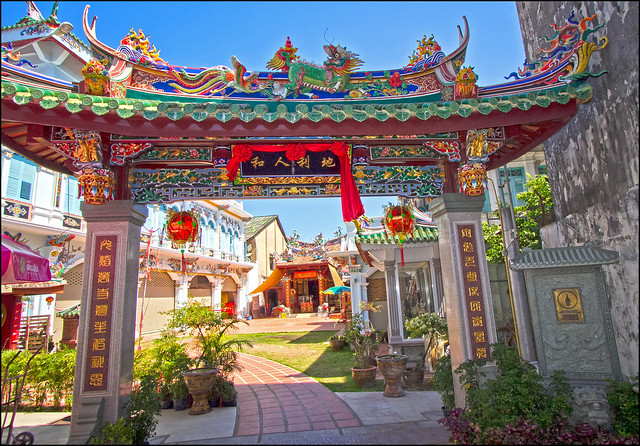 (above) Shrine of Serene Light

The 2 largest shrines in Phuket Town - and on the mornings when these shrines have their street processions during the vegetarian festival it's a bit manic. There are about 10 shrines in the Phuket Town area - the map below shows locations. Much of the time at shrines like this nothing much is happening. if you visit on a random morning, not during a festival, you will find them quiet, but open to anyone who wants to look around. At festival time, it's another story! 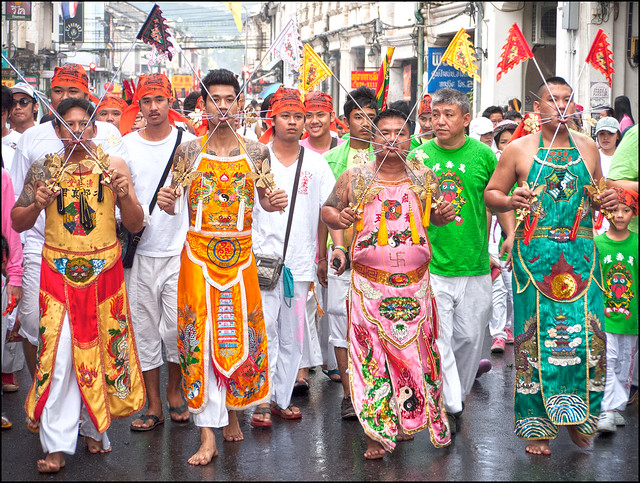 I always found it interesting to explore Phuket's history and culture, which can be hard to find in the more touristy areas, but there's a lot more to Phuket than just being a holiday island with hotels and beaches. Part of the reason for starting this blog way back in 2006 was to show the real Phuket and encourage visitors to see a bit more. Happy Travels!

You have been reading : Chinese Shrines in Phuket