You might not have heard of Ao Sane beach. I know people who live here who don't know it, or they have heard of it, but have never been, or don't know how to get there! Ao Sane beach is still a small, quiet beach and when I visited in September 2018, I felt like I'd gone back in time. First time I went to Ao Sane was 2006 and it's really not changed since then, although Phuket tourist numbers have increased a lot! The southwest corner of Phuket makes for a nice drive in a car or on a moped, there's plenty to see in this area such as the Big Buddha, Karon Viewpoint, Phromthep Cape and plenty more - see A Tour of South Phuket. The roads are quiet here and the scenery is great even if the area is a lot more developed than it used to be.

Ao Sane Beach is not well known and is a little bit hidden. You need to get to the larger Naiharn Beach, and at the north end of the beach follow the road that passes around the entrance to The Nai Harn Resort. Then you have about another 600 meters of narrow, twisty cliff-side road before reaching a small parking area and a big sign saying 'Ao-Sane Bungalow and Restaurant'. If you carry on straight you enter the Baan Krating Resort. 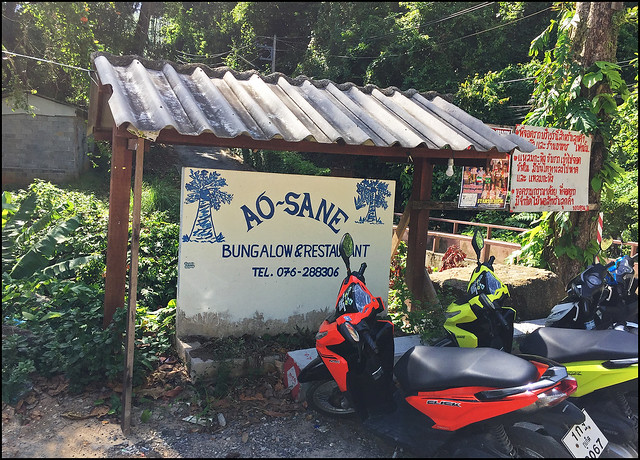 There's space for lots of mopeds, but not so many cars. And I saw a couple of signs saying they will fine you and remove your vehicle if you block the road, so I guess there has been an issue in the past! You could also just park at Naiharn, where there is more parking space, and walk about 1 kilometer from there to Ao Sane. 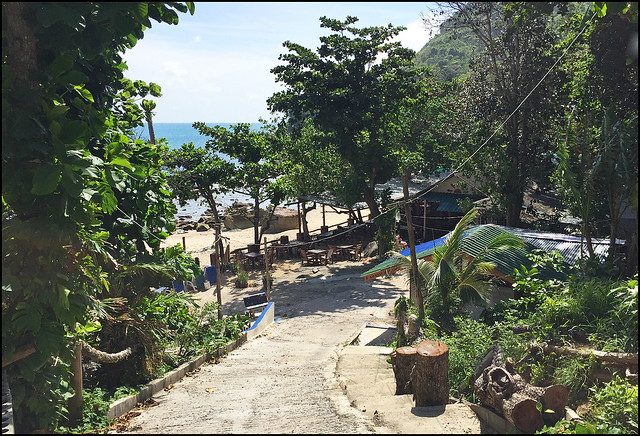 And then you walk down a steep concrete path (see photo above) for about 50 meters to the beach. Ao Sane is not big - the beach stretches only about 130 meters from end to end with granite rocks at either end, and some pretty big granite boulders on the beach and in the sea too! The view looking east (see below) towards Phromthep Cape and Ya Nui Beach is great. 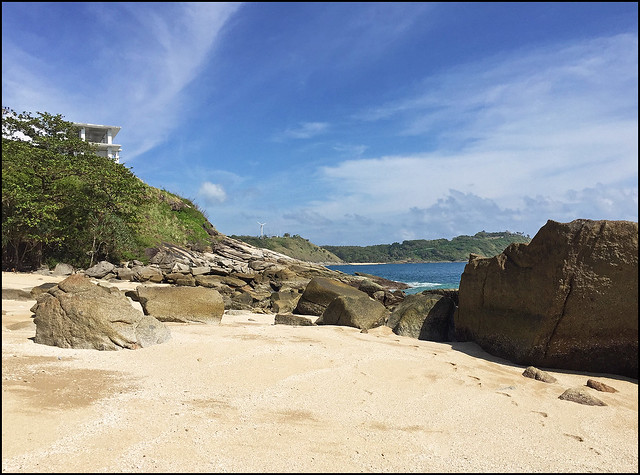 At the east end of the beach there are some beach chairs in the shade. Not too many, and I am guessing you'll need to pay to rent one. With the restaurant only a few steps away, this is a place you could easily sit for some hours and have a few holiday drinks interspersed with a swim or snorkel in the sea. I believe the snorkeling here is OK when the sea is calm and there used to be a tiny dive shop run by a German guy .. I know he has gone back to Germany, but I hear that he sold the place . it was not open when I visited, but maybe in high season. 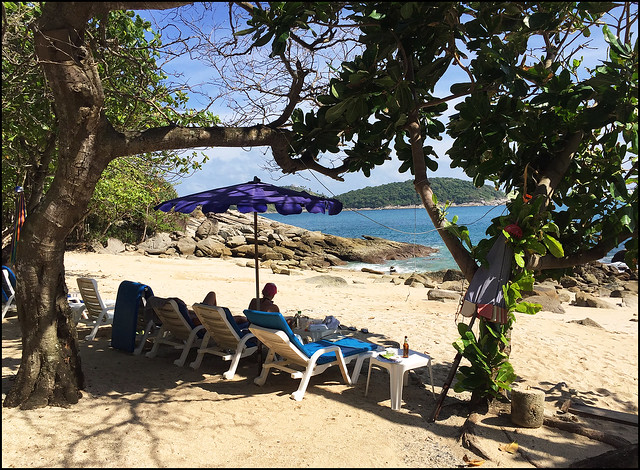 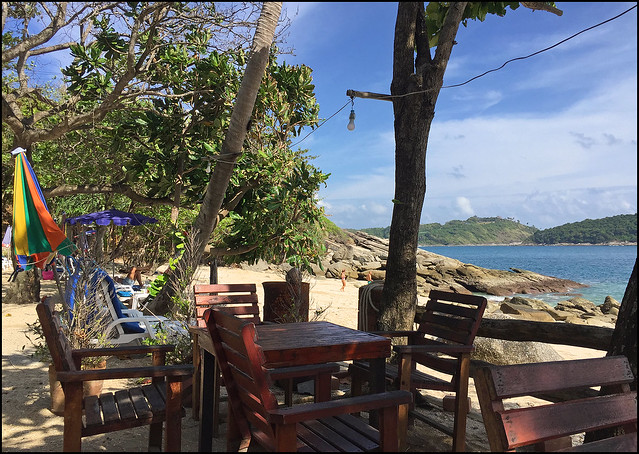 The restaurant at Ao Sane Beach has plenty of tables, mostly in the shade. Looks pretty much like it did back in 2006. Nothing fancy, prices reasonable (maybe a bit more than I'd want to normally pay for Thai food, but ...). And very quiet and relaxing. No loud music, no traffic noise, just the sound of the ocean. I had not planned more than a quick visit to take photos, but figured a beer would be nice and why not have lunch too. 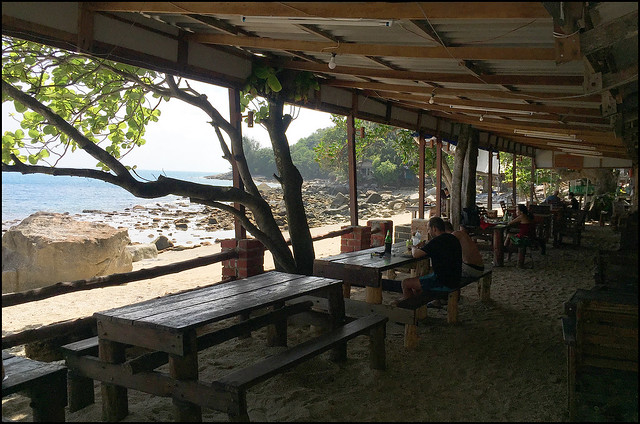 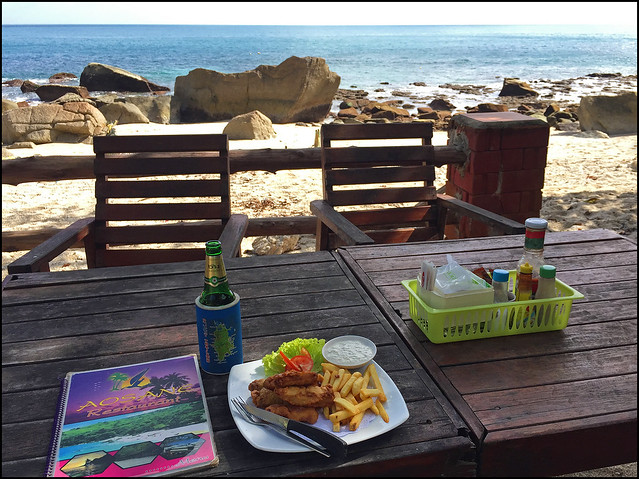 Thai food prices were about 90 - 150 Baht. I went for fish and chips (200 Baht) and it was a very good portion! And went very well with a cold Chang beer. I sat for nearly an hour enjoying life. I think a trip with the whole family will be on the cards soon - and then I can have more than 1 beer and let my wife drive :)

To the west side of the restaurant are a few bungalows, some looking better than others. The low season rate - 500 Baht per night. Basic, but right on the beach with a restaurant next door. Deal? I am not sure where else in Phuket you can get a beachfront bungalow for 500 Baht. 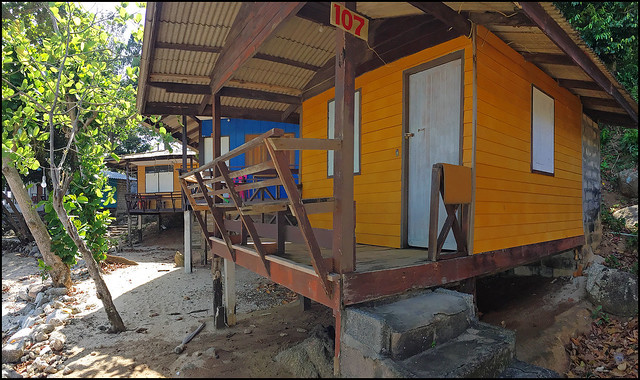 I need to spend a bit more time in this area. The nearby Nui Beach is on my list for a visit soon and Naiharn beach is very nice too. Rawai Beach has places to eat and you can hire boats out to nearby islands and one day I really should get to the restaurant at Bon island. Too much to see, too little free time.

You have been reading : Ao Sane Beach - One of Phuket's Gems