I do like to explore Phuket Town (now officially called Phuket City), especially the old town. It's a town full of interest, history and the best place for taking a peek at the "real" Phuket away from the tourist zones. There have been quite few blog posts about Old Phuket Town which is my favourite area of Phuket, and I'd like to blog some other parts of town too. One area that we often visit is Sapan Hin (also spelled Saphan Hin).

Sapan Hin is a large open area in the south of town - follow Phuket Road south from the center and keep going. You'll pass Bang Neow Chinese shrine on the way and the Phuket Immigration office. As you reach Sapan Hin, theres an odd shaped monument in the center of a traffic circle - it's apparently meant to represent a drill bit and is dedicated to the tin mining industry that made Phuket rich during the 19th and early 20th century. 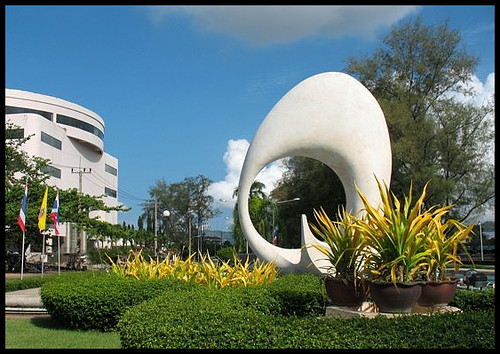 As you continue, you pass sports facilities - there are several sports halls (we have been to watch my son play indoor football and my father in law play Takraw here) and a Muay Thai stadium (there are weekly fights every Friday), tennis courts, an ICT center plus a small stadium and open playing fields. The Sapan Hin area was built on reclaimed land, designed to provide space for public facilities and a recreation area near the town. Sapan Hin is right by the ocean which is slowly trying to reclaim the reclaimed land! Major work was undertaken a few years ago to fix the erosion and make a nice park with paths for walking, benches, grassy areas and rocks that make ideal seats. 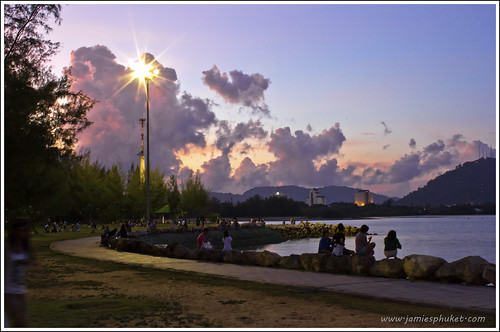 In the morning you'll find people out jogging or exercising or just sitting enjoying the fresh sea air. There is a mangrove walkway here too, and it looked like the old wooden walkway was being replaced when I was there last week. The shallow seas here, along with mangroves and mudflats make this a good place for bird spotting. The shallows are also used by people out hunting for shellfish at low tide ... 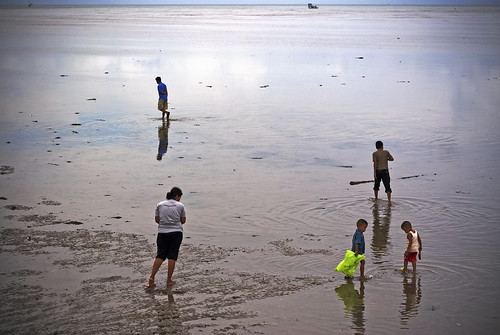 At the south end of Sapan Hin there's a Chinese shrine, one of many in Phuket Town, which has a large Thai-Chinese population. This shrine is called Kiew Tian Shrine, and plays a major part in the annual Phuket Vegetarian Festival - all the street processions during the festival visit Sapan Hin. 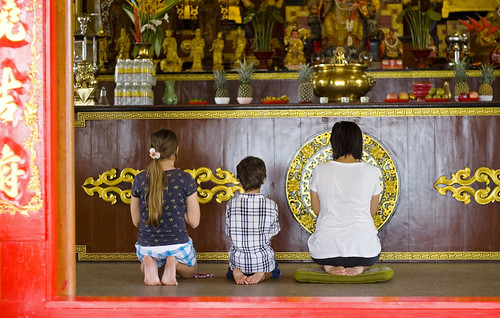 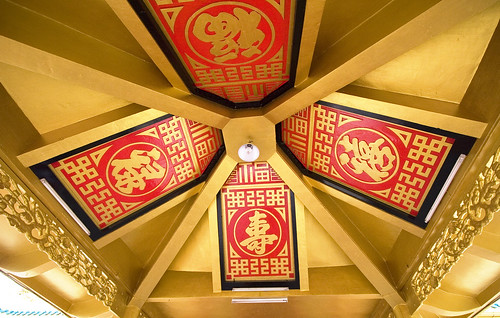 Before saying any more, a word of warning. Sapan Hin is a nice area to walk around, and I would say is quite safe in the day time or early evening. At night (unless there's a fair going on) maybe a different story. I have quite a few times of gangs fighting here, drugged up kids, people fighting, drinking gangs gathering etc... Not a place to be wandering around late at night. Every town has such places!

Having said that, Saphan Hin's large open areas are used regularly for municipal fairs, festivals and concerts. We have been to Sapan Hin for such events as the Food Festival, the OTOP Fair, the Phuket Flower Fair. 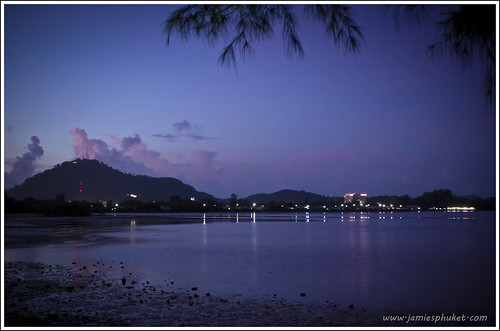 On the west side of Sapan Hin, the Bang Yai canal flows into the sea. Years ago (when the canal was actually used for transporting goods) the canal was probably rather cleaner... Looks very green now and I am sorry to say there is a fair amount of garbage in the water. The canal flows right through Phuket Town (in town it's very small but used to be wide enough for cargo boats 100 years ago). At Sapan Hin, you can find many small fishing boats using the canal as their "port". The boats are mostly small longtail boats rather than larger fishing boats which are found at Rassada port on the east side of Phuket Town, about 4km from Sapan Hin. I like the "old world" feel of the boats along the canal. 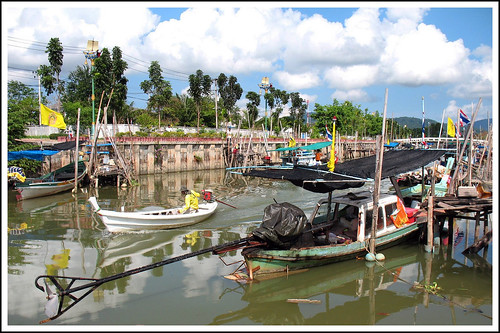 Along the canal there is a nice pathway with recently planted trees. Saphan Hin was a bit dirty some years ago and in need of some work - now it's been done up! Good, as this area is for the people and needs to be looked after. There are paths all around the area, good for a walk, a jog, some fresh air and a good place for visitors to get some "local life"!


You have been reading : Sapan Hin (Phuket Town)