Sometimes we visit a restaurant for the first time, and we instantly add it to our favourites list. We visited Tha Sai Seafood on March 3rd 2012 for a late lunch - we arrived about 2:30pm feeling hungry and thirsty after spending half a day already exploring in Phang Nga, visiting caves, a very odd temple and a forest park with waterfalls. I remembered hearing about this restaurant before and we have passed the turning before, it's off the road between Phang Nga and Krabi, but only about 15km from Phang Nga town. It was one of those "try something new" days which we ended up enjoying very much, and Tha Sai helped with that!

We parked hesitantly by the restaurant while a local dude tried to suggest we park in a different spot. It looked very quiet, and from the road, did not look like anything amazing really. 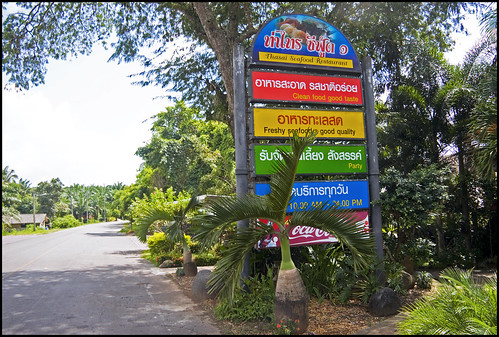 (above) entrance to Tha Sai Seafood on a quiet side road

But we were pleased to see that they offered Freshy Seafood :) 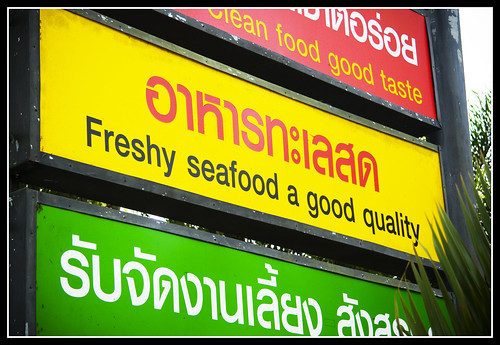 Well, we were committed to eating lunch, we were already into rumbly-belly time, plus I was dying for a cold beer! Through the entrance, and then Wow! It was not obvious from the road, but the restaurant is right next to a wide mangrove river. Bigger than it looks from outside and there are several levels of seating; we chose a table lower down. Here's the view from our table. 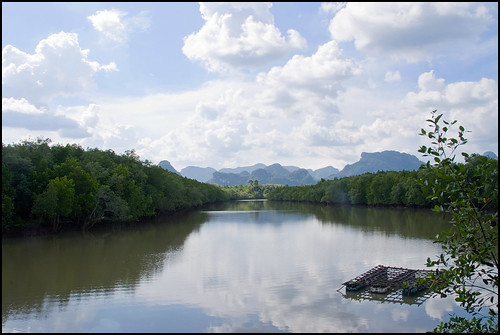 What a beautiful spot. We're coming here again, I said ... so long as the food is good! We had not ordered yet, and a return visit was already being planned! A longtail boat chugged it's way past the restaurant. The river leads out into Phang Nga Bay. 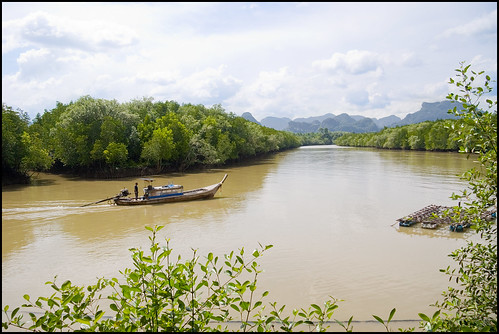 Did I mention that I was thirsty? Before any food arrived, let's get the drinks in. Time can change a person. Time and circumstance. I do like a beer. I used to love real ale in England, but that's not so easy to find here. My beer of choice in Thailand is Chang. Hated by some, loved by others. Must be cold. You may see Thai people with ice in their beer. This may be viewed as odd by many visitors. We arrived at Tha Sai Seafood on a hot day, after walking around caves, temples and forests. Ice in my beer. OK! 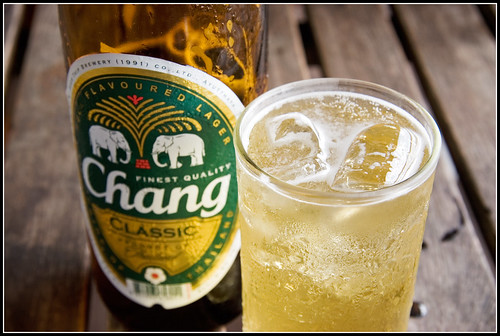 Being a late lunch, there were only a few tables occupied, though I saw a lot of staff around, which indicates that is is a popular place. And a popular place in the middle of nowhere has to mean that people are willing to drive a bit for good food. And yes, the food was good. We ordered all kind of dishes. This is one of my favourites called "Yam Pla Dook Foo" - fluffy fried catfish salad... 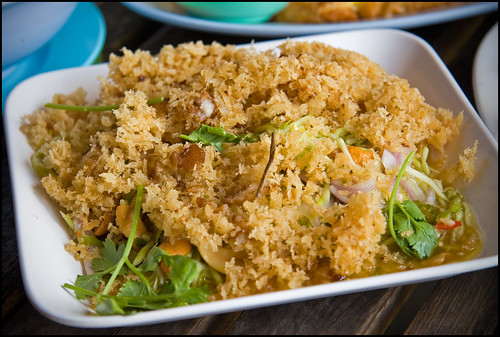 And another one of my current favourites, thanks to my wife who insisted I try it. Never used to eat any crab, but this is great! It's called Poo Nim - Soft shelled crab, and this is fried with garlic. And it goes just perfectly with a cold beer (with ice)... 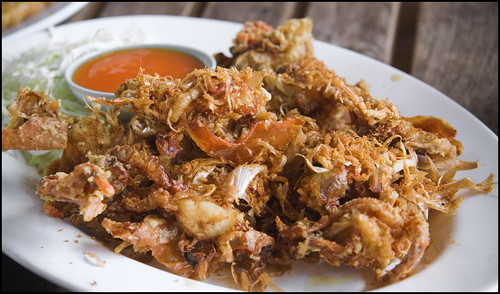 We had plenty more too! It was one of those happy afternoons - find a new restaurant, great food, great view. Thai Sai Seafood is maybe a bit far to drive just for lunch, would take about 1 ½ hours. But if we are in the Phang Nga area again, we'll eat here again. The day out was great for exploring - we also visited Wat Thamtapan Temple, and Sa Nang Manora forest park on the same day. With an early start to the day, a lot can be accomplished! There are more places I want to visit in the area such as the Raman Waterfall and a fishing village called Bang Pat which has a restaurant and homestay. Days like this remind me how lucky we are to live here!

UPDATE - We have been back to Tha Sai many times since this blog post in 2012. We still like it :)