What? There are museums in Phuket? Surely Phuket is a beach resort island.. what could possibly be worth putting in a museum? Well, guess what... Phuket has a long and interesting history. Tourism really only started about 25 years ago and of course now tourism has a massive influence on Phuket and tourism is the most important source of income to Phuket. Thousands of people live in Phuket because of tourism. Thai people come from all over the country to find work here, and of course many foreigners too (like me!) come here to work or retire.

There have been large changes even in the 11 years that I have been here - mostly in terms of infrastructure and the availability of such delights as shopping malls and huge DIY/Home Decor stores. The old history and culture can be a little hard to find under the new layers of modernity, but it's there. Phuket is a big island and there are large areas of quiet farmland covered in rubber plantations or pineapple groves or shrimp farms. You can't see this if you stay at the main beach areas, but if you hire a car and drive around, you suddenly see the old Phuket. Of course people were here before tourists came! Phuket was actually quite rich due to the tin mining industry and rubber industry and fishing and coconuts/palm oil/pineapples/shrimps and the fact that Phuket was an important port. Enough on the history for now... This blog touches on the old side of Phuket quite often. Over the years I have blogged about several Phuket museums where people can learn more about local history. 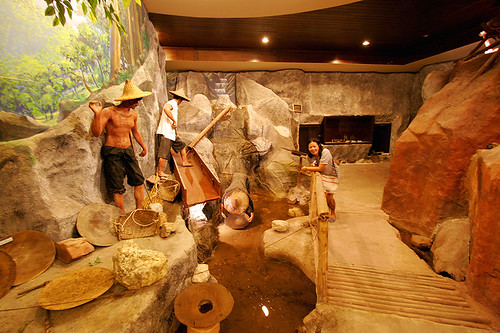 Tin mining played a huge role in Phuket's history and this museum has loads of information and great dioramas relating to the tin mining era as well as geological information and great mock street scenes representing old Phuket. We've been a couple of times, our kids love it, I think it' very well done and entry is cheap - only disadvantage is the location up a hardly-known back road between the Loch Palm golf club and the British international school.

The tin mining industry was based around the Kathu area of Phuket between Phuket Town and Patong. For the last few years, Kathu has had a 3 day street fair with lots of costumes and also tin mining demonstrations. 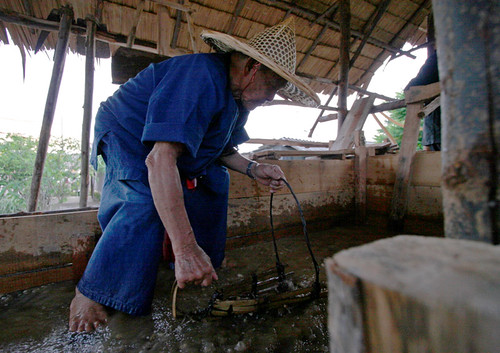 The Thalang National Museum of Phuket opened in 1989 and provides a long historical record of the people of Phuket ranging from indigenous cultures up to the modern era. There's a big section devoted to Phuket's famous Heroines who rallied the people to beat off a Burmese invasion in 1785, an event that is remembered by a festival every March (the Phuket Heroines Festival). This museum is easy enough to find, heading north towards the airport and turn right at the Heroines Monument, the museum is just 100m along the road. 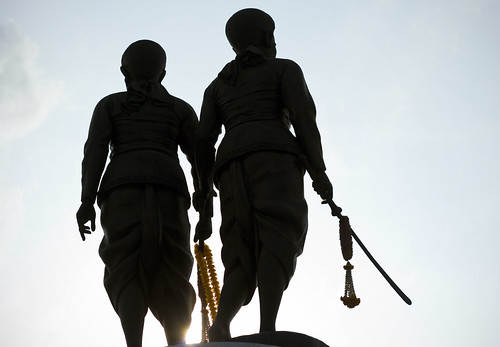 (above) - the Phuket Heroines Monument is seen by most tourists coming to Phuket, as it's on the main road from the airport south to most of the beach areas.

Open since 1997, a great collection from Phuket and round the world, shells of all shapes and sizes collected by a local family. I visited for the first time in March 2012, and it's pretty good! Only 200 Baht entry fee. 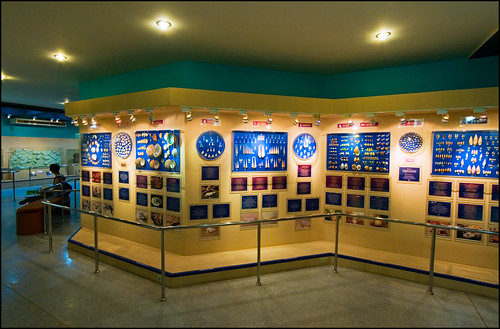 A really interesting (for me!) and well looked after museum, housed in the old Thai Hua School in old Phuket Town. Thai Hua was (and still is) a Chinese-Thai school, with Chinese being taught as a major second language. This was very important 100 years ago with all the Chinese people coming to Phuket. And these days, probably just as important in terms of SE Asia business. The museum is full of displays relating to Phuket history as well as school relics, old photos. Entry 200 Baht. Easy to find on Krabi road, just half a block west of Thalang Road in old town. 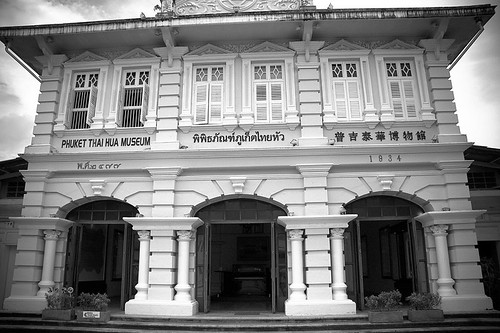 And just another block west of Thai Hua you find a couple of old mansions. One of these, called Chinpracha House (or Baan Chinpracha) is also a museum. The owner still lives there (upstairs) but downstairs is a wonderful old house full of photos, old furniture, I love the tiles too. We visited first in 2010 as part of a tour organised by Phuket Heritage Trails. Went back in October 2011 for another visit. 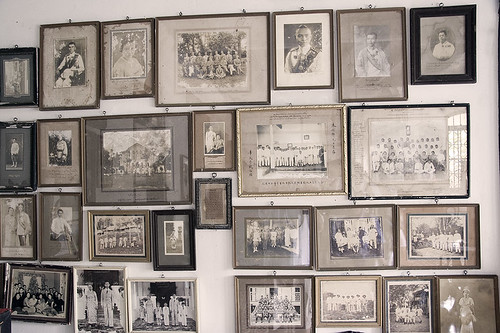 (above) old family photos at Chinpracha House in Phuket Town.

Located in the former Standard Chartered Bank building in old Phuket Town, this small museum was supposed to open in about 2015, but has now finally opened properly in 2018. 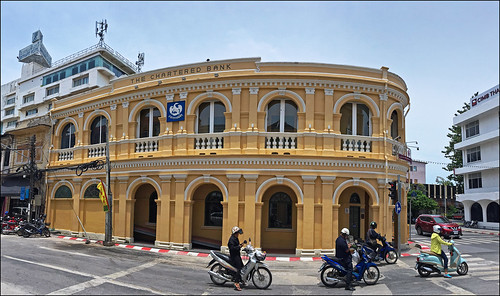 (above) The old Chartered Bank building in old Phuket Town

Just to the east of old Phuket Town is the central post office. There is a new building and next door is the old Phuket post office which houses a small museum that would probably be only of interest to stamp collectors or post office workers! Nevertheless, entry is free and if you are passing by, why not have a look?!

There are some oddities in Phuket which I have not blogged yet. In Phuket Town, at least in the old town, just walking around can feel like a museum. Check out old hotels like the newly renovated Memory at On On Hotel or the Thavorn (which has a room full of junk downstairs, which they call a museum) - or the old shops on Thalang Road. Just step into the Old Chinese Herb shop and breathe deeply. Parts of the old town, despite some modern additions, are like a living museum. 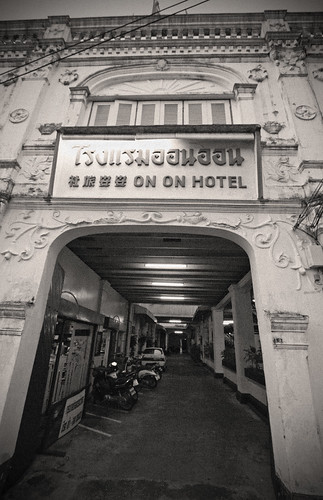 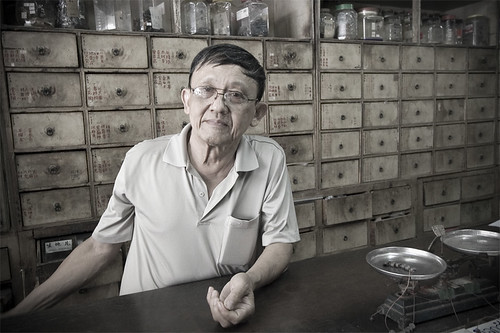 Some of the festivals in Phuket are based on old traditions. I guarantee that if you head to a shrine during the Phuket Vegetarian festival you'll feel a sense of timelessness. The chanting, the incense, the music, the clothes.. Is this the 21st century? 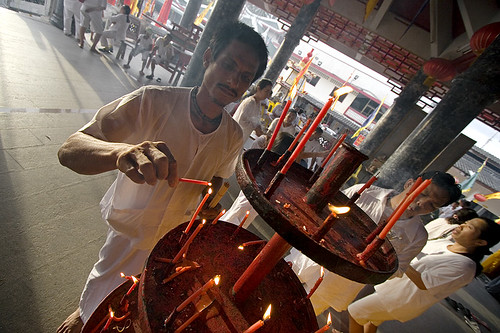 (above) Lighting candles at Kathu shrine during the vegetarian festival.

Phuket has way more history and culture than is obvious on the surface. A holiday at the beach in Phuket is nice, but I do recommend a little exploration, and temples or museums are a good place to start if anyone wants to do more than just eat and get sunburned... also something to do on a rainy day!


You have been reading : Phuket Museums - Discover the History of Phuket