Something different! Last weekend, on the night of February 17th 2018, my wife and son and I took part in a big local fun run - the Phuket Night Run. Thousands of people took part, mostly just for fun although there were some more serious runners. It was a big event actually, bigger than I anticipated with nearly 3,000 people registered according to the official website. There were 3 different runs - 10.6km, 5.4km and 3.2km - something for everyone. We signed up a couple of months ago (our daughter signed up too, but in the end she had a more important party to go to that night!). For me, a bit of a challenge. I have been doing more regular exercise over the last 6 months, but before that I admit to spending too many years being lazy, drinking too much beer, doing very little exercise and getting bigger / fatter. I reached a peak weight of about 116kg last year, which was down to 110kg before the night run. My aim is to reach 99.9kg by the end of 2018. Most of my exercise is walking, but Im trying to add in some running. Near our house is the Bang Wad Reservoir, very popular for locals to go running, cycling or just walking the dog. 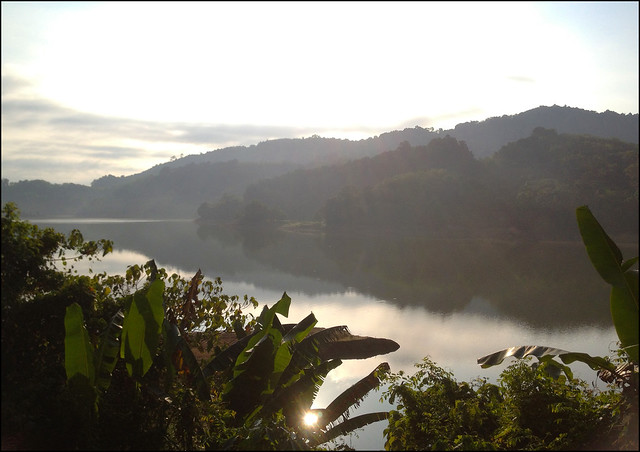 Signing up for this was a bit of a challenge for me. I did not actually expect to run the whole 5.4km that we signed up for. I know it's not far, but I have become too unfit and this is a stepping stone. When I was a kid, I was a fast runner. Nothing amazing, but I was a decent club athlete, won a few medals here and there at local and county events in Sussex, England. Our team (Crawley) took part in the national young athletes league and we reached the national finals many years. That was a long time ago! I kept pretty healthy with cycling for many years and lots of travels and scuba diving, but the last 10 years I have been mostly sitting in an office and getting fat. And (scary) I'll be turning 50 next year. Ouch. Time to get fitter before it's too late!

There seem to be local fun runs in Phuket every few weeks. My dear wife has been much more dedicated than me. She's got very fit over the last year .. she could barely run at all a couple of years ago, but now .. I can't keep up! So I really do need to get fit! She did a 10km run at the Phukethon in December 2017. I was amazed! 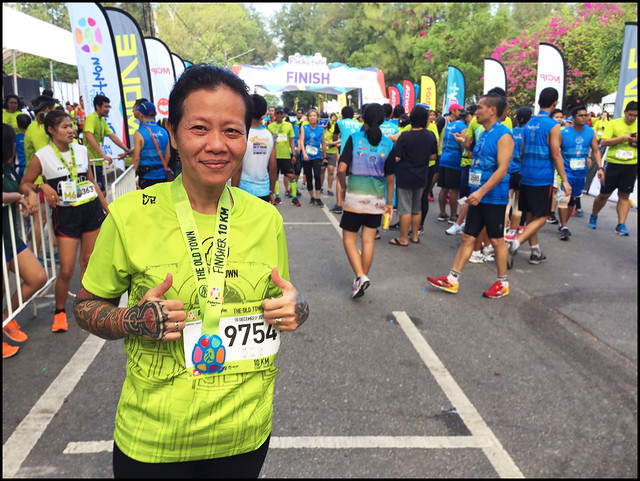 (above) My wife after the Phukethon 10km run in December

Saturday evening .. 3 of us drove into Phuket Town for the start of the Phuket Night Run about an hour before the start - our 5.4km run was scheduled to begin at 10:35pm. Parked the truck near Wat Mongkhon Nimit temple on Dibuk road just a few hundred meters from the start at the Limelight mall. The road outside the mall was closed to traffic and the whole area was very very busy. A rock band was playing as we arrived to get everyone warmed up.

As you may see from the video above, it was busy! We found a few friends who were also taking part, and bought a couple of drinks. Stay hydrated! 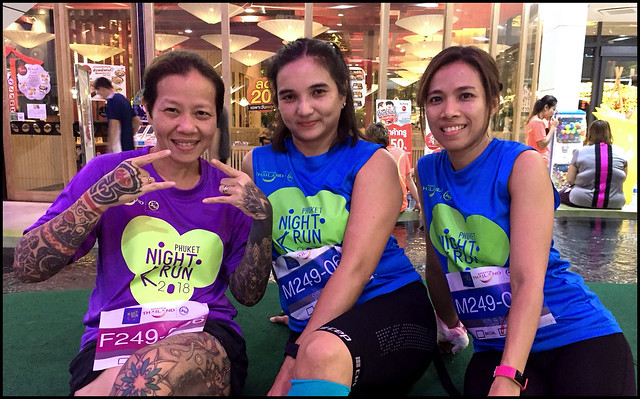 (above) My wife and a couple of friends who were doing the 10km run. That has to be the challenge for next year!

The band switched to an aerobics work out to get people really warmed up ...

(above) Warm up routine for runners and walkers at the Phuket Night run. It was so busy! Phuket people love these fun runs! And this was a Saturday night in Phuket Town. The organisers made this into a night out, not just a run! Plus there was a charity involved - part of the entry fees for runners was going to support the Phuket Gibbon Rehabilitation Project. People could also run dressed as gibbons, though I don't think I actually saw any. 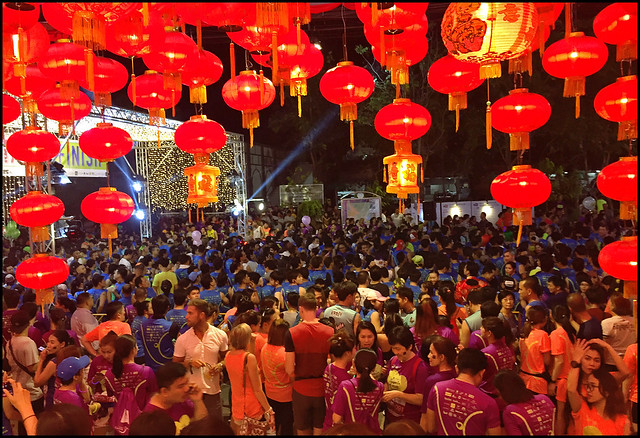 (above) The start ... Blue shirts for the 10km runners who started first. The 5.4km runners were in purple and the 3.2km folks wore orange. The 10km runners set off 5 minutes before the 5.4km runners including us .. we squeezed in right at the back of the 5.4km runners. I think next time we'll try to get nearer the front because the first few minutes we were walking slowly - so many people! Took about a kilometer for the runners / joggers / walkers to spread out. At this stage I am a jogger. I wondered if I could jog the whole thing, but was not averse to walking a bit too! So I tried to take a few photos on my iPhone during the run, but it was mostly a bit too dark. The picture below was taken maybe 5 minutes after the start. I seem to be following a giraffe. 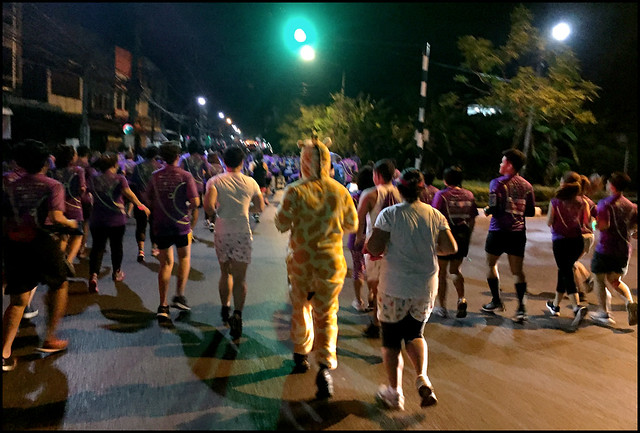 Oh, and people could also run in pyjamas / night clothes which is why you see a couple of guys in boxer shorts in this picture! Prizes for the best pyjama runners! The route for our 5.4km run took us looping around Phuket Town especially the old town area. We headed south to the clock tower (Surin Circle) and back up Phuket Road to the old town. I was doing my best to keep up with my wife and son, and I think after about 3km I was thinking .. maybe I can jog all the way .. or not .. and then (thankfully) my boy said "Dad, can we walk a bit?" so we let Mum run off ahead as we walked and jogged round the streets of old Phuket Town - along Phang Nga Road, Thalang Road, Krabi Road, Dibuk Road .. I know these old town streets very well and it helped and made the distance feel shorter. As it was Saturday night, people in pubs and bars were cheering all the runners, plus dancers were on stages at a couple of places around the town - it was a very jovial atmosphere! A real fun run! And I saw a couple of friends along the way waving hello :) 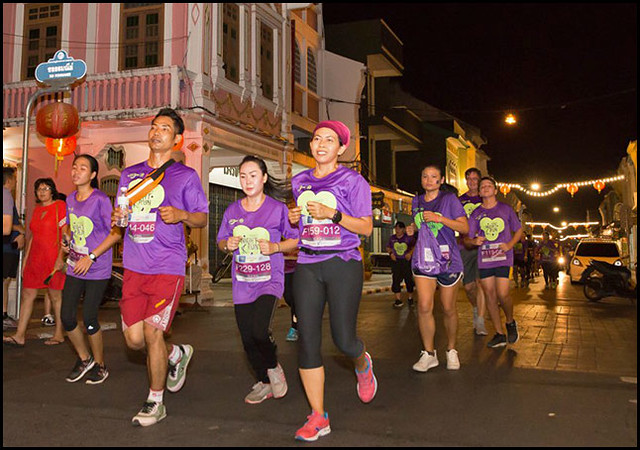 I was hoping to find that one of the 'official' photographers had taken a photo of me, or us, or any of us .. but among nearly 1000 pictures on the Phuket Night Run Facebook Page, the only one I found is above - you can see me and my son at the back of this little group running along Thalang Road in the old town I did also find someone's video where I run through the frame about 12 minutes in!

My attempted selfies during the run were not much good! My dear wife who finished some minutes before me and the boy did manage to snap a picture of me at the finish ... 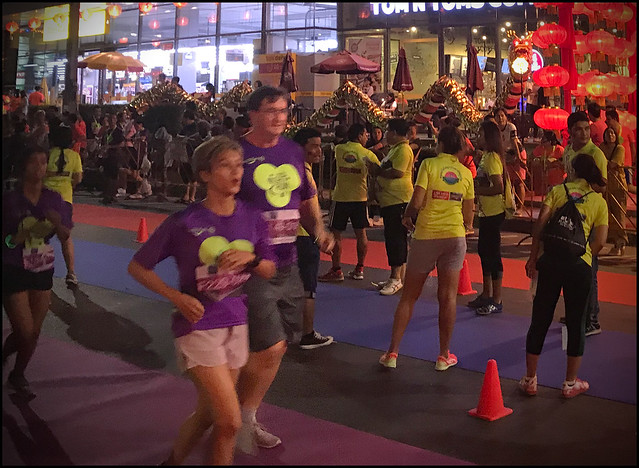 It was a good evening and I am determined to get fitter and do another fun run in the future. The next Phukethon is in November, so maybe I could be ready for a 10km run? You have to aim high! You can find a list of some upcoming fun runs and more serious runs in Phuket here. 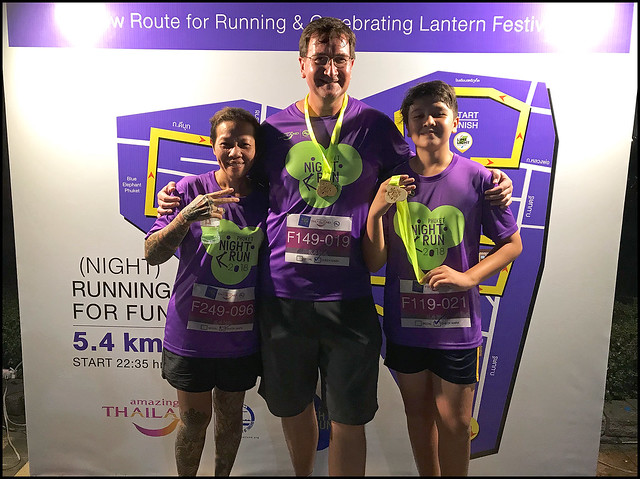 (above) The family after finishing the 5.4km Phuket Night Run. Well done, us!


You have been reading : The Phuket Night Run