There's a place on Thalang Road in the heart of Old Phuket Town that always turns heads. If you walk past this place, you are bound to notice the smell. And certainly not a bad smell. Something kind of ancient and magical. I can't help but walk in. Outside is a sign that says "Oldest Herbs Shop". The name of the shop is Nguan Choon Tong. Stop outside. Inhale deeply. 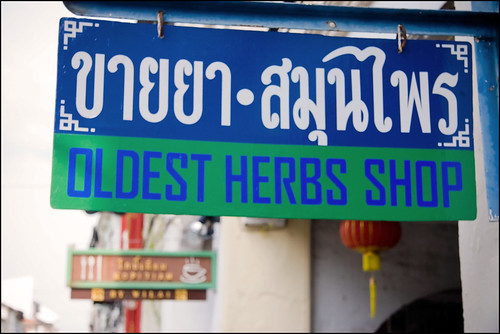 Thalang Road is my favourite street in Phuket, I like the old town, there's history here, and a very different kind of Phuket exists here away from the beaches. Tourism does have some influence, there are more little cafes and guesthouses than there were 10 years ago, but a lot of the tourists that come here are Thai. Thalang Road has been spruced up, with the most noticeable thing being the lack of overhead cables. I do like the old shophouses, the wooden shutters, the mix of Muslim and Chinese businesses, some of which have been on the street since the early 20th century when this part of Phuket Town was built. The herb shop opened in 1917, opened by the grandfather of the current proprietor. It's a family business run by the Bumrungwong family who also own the buildings either side of the herb shop, both of which are restaurants. On one side is Wilai restaurant, the other side is Kopitiam. I was in Kopitiam a couple of weeks ago. One of the family running Kopitiam is Wiwan, great granddaughter of the man who opened the herb shop. Her uncle, Wisit Bumrungwong, runs Nguan Choon Tong now. 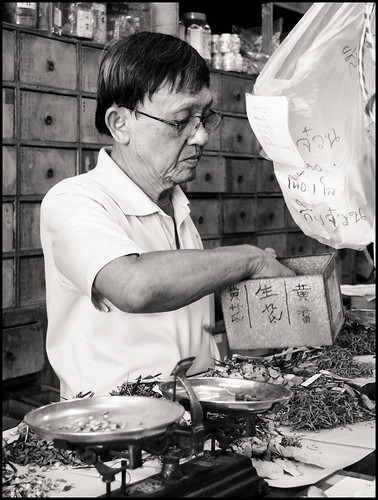 I asked Wiwan to ask her uncle for permission to take some photos. He's not overly keen on tourists snapping away in his face really. It was a good time to take photos, as Khun Wisit, assisted by his wife and son, was preparing medicines. Portions of herbs were being weighed on the old scales and added to piles of herbal mixes, ready for sale. I am quite amazed that business is still strong. Doesn't everyone use modern pharmacies now? Well, at least in the old town, the Chinese herbal medicine is still popular. 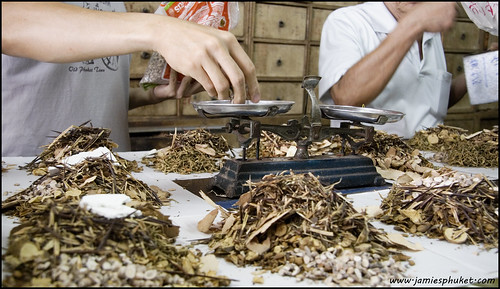 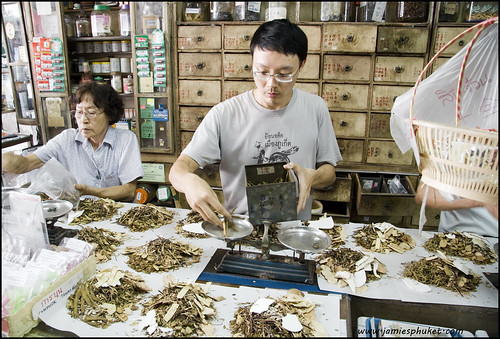 The knowledge of Chinese herbal medicine has to be handed down to the next generation. Khun Wisit sometimes still asks his father, Khun Narong Bumrungwong, for advice. Khun Narong lives next door, at Kopitiam. Only a few of the family live here now, but until 30 years ago, the herb shop was a home and business. It was a typical shophouse. No commuting necessary! I have friends in Phuket now who have bought brand new shophouses and live above their business. The herb shop on Thalang Road is now just a business, nobody lives there, though several of the family live next door. 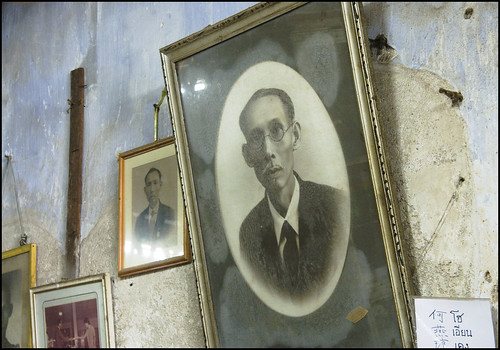 (above) Photo on the wall at the herb shop. This is the founder of the shop, his name was "Yan Keng". Photos like this are common in the old shops in Phuket town. He is the father of Sodsri Bumrungwong, wife of Narong. The shophouse that is now Kopitiam was bought by Narong and Sodsri about 30 years ago to use as a house. So they did have to commute a few meters to work :) 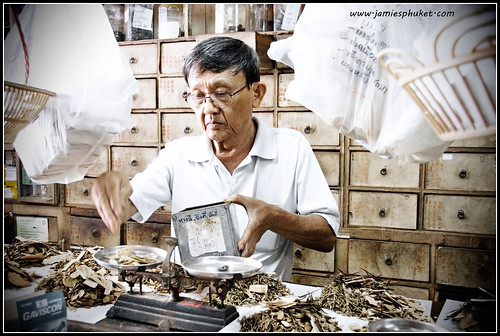 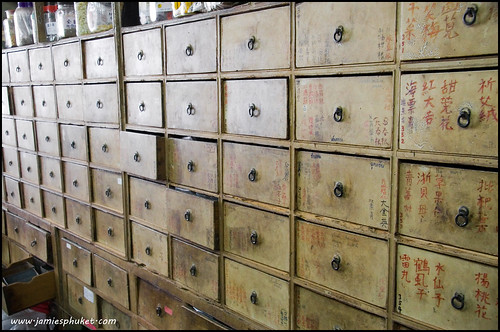 Old Phuket Town is not really so old. Most of the older buildings were constructed in the early 20th century as Phuket Town became the new center of commerce for the island, with business driven by the tin mining industry and the rubber industry. That's when Phuket became important. And the Nguan Choon Tong herb shop was right there to catch the wave. The old Chinese traditions are very evident today. There are Chinese shrines all over town, and festivals like the Phuket Vegetarian Festival and Hungry Ghost Festival show that the traditions are not lost. And the herbs live on too.


You have been reading : Nguan Choon Tong Herb Shop in Phuket Town