A visit to Layan Beach

There are plenty of changes currently being imposed on Phuket by the military - mostly cracking down on rip offs, local "mafia" and actually imposing the laws that have been overlooked in Phuket for many years. Chief among these is encroachment at the beaches and structures being built on the beach or on land that is officially designated as national park land. Over the last couple of months, buildings have been removed all over Phuket with the idea being to make the beaches more natural. We recently visited Surin beach and Laem Sing beach to check out the changes, and last weekend I wanted to try Layan beach, which used to be a favourite hangout of ours some years ago (I blogged it in 2007). It always was a very quiet place, located at the north end of Bang Tao beach. Only a couple of hotels, an almost empty beach, one restaurant ... I knew that an upmarket beach club had been built there and that had kind of put me off visiting, but we decided to have a look ... 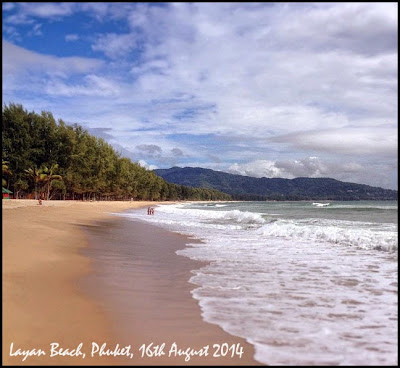 Aside from the Nikki beach club (which from the rear looked rather ugly - concrete walls spoiling the view of the ocean) nothing much has changed. And since it was low season, the beach really was quiet. Above photo shows the view looking south along Bang Tao beach. Only a few people on the beach. To be honest much of the north of Phuket is like this. If you are staying at Patong beach and complaining that Phuket is crowded, get out of Patong! We took a little walk. No people. No beach chairs. I do like an empty beach! Sure there was a bit of flotsam washed up on the beach, same every low season when the west winds blow the Indian ocean onto our shores. But the beach was more or less ours! 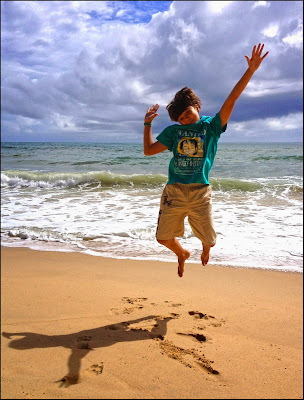 The Nikki beach club seems rather out of place. Aside from the old thatched roof restaurant that's been there for at least 10 years, the new beach club is the only thing near the sand. Too near? Well, it's not been knocked down yet! And when I am on a beach I like the sounds of the waves, not a thumping trance music beat. Well it's not my cup of tea. These beach clubs have sprung up over the last 5 years to meet a demand I suppose, a demand for places where rich people can hang out and not be bothered by the less well off. I saw 3 security guards at Nikki, and on a low season afternoon, only a few customers.

(above) And looking out to sea from Layan beach

Now, Layan beach has 2 parts - the southern part is essentially the north end of Bang Tao beach and I'm not sure how it qualifies for a different name! If you move a bit further north, there is a canal emptying into the sea and a small island called Koh Kala which is connected to the mainland by a sandbar. Just north of the island is one resort (Anantara Layan Resort) and just past this a small dirt carpark with access to the beach - at low tide you can walk over to the island, and we've been for BBQs here before, a very nice untouched quiet place. There were rumours of a marina being built but I think this little bit of land is a protected area. It's not really a swimming beach, more of a lagoon being semi enclosed by the island and sandbar. The sand is nicer at the south end of Layan, but it's a nice spot for a picnic.

(above) at the "lagoon", north end of Layan beach - view of Koh Kala looking south. 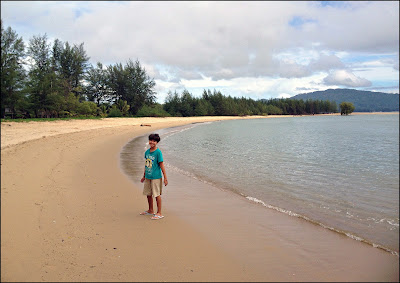 (above) On the beach, Layan beach (north end). Don't anyone tell me "Phuket is crowded"! Sure, some of Phuket is crowded and some roads are full of cars and there are roadworks, but .... much of the island is quiet. Go and explore! After Layan beach we carried on north, the road passes the 5 star Trisara Villas, and then winds around the hills before reaching Naithon beach which I also blogged many years ago and, while it's still quiet, there are a couple of new resorts and we could see that beachfront buildings had been knocked down, so that blog page also needs an update sometime!


You have been reading : A visit to Layan Beach