Now here's something I have meant to do for years ... Phuket Airport is located in the north of Phuket island, about 10km from the Sarasin bridge (as the crow flies, or about 20km by road) .. and about 40km from Patong beach. I have known for a long time that you can stand on the beach right under the west end of the airport runway, and so have planes taking off or landing right overhead. I have seen some very cool photos online with planes landing from the west, over the sea, over the beach, coming in very low to land near the start of the runway. If you are flying in to Phuket you'll always get a good view if you have a window seat! The direction of takeoff and landing depends on the wind ... planes take off into the wind, so I think I might need to wait a while to get the landings from the west - it's May now and a light west wind is blowing, so on the day we went to Mai Khao beach the planes were taking off over the beach and landing from the east. It's easy to check the take off / landing direction on the Phuket Flight Radar. Well, this was an exploratory trip and I will return to try and get some cool "airplane over the beach" photos!

I went with the kids on a sunny Sunday. Had no idea exactly how to get to that section of beach .. last time we drove to Mai Khao Beach was years ago! I tried following Google Maps, but ended up driving into the West Sands Resort and sending a security guard into a bit of a panic when I kept driving down towards the beach - can't go that way! Then tried a dirt road that quickly became sand and my truck is not 4WD! Managed to get out of that with a little wheel-spin and then asked directions - you need to find Maikhao Soi 6 and drive down to the beach next to the small Coriacea Boutique Resort. It's a small road with limited space for parking. I guessed we were a bit more than 1km from the airport / runway. First surprise - it seems quite a lot of people do this! We found a bunch of motorbike taxis with sidecars ready to take us along the beachfront to see the planes. They said 1.8km so I paid up 20 Baht per person for the ride. 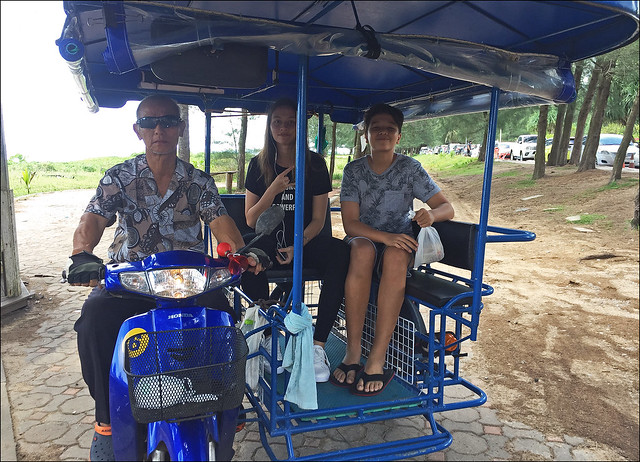 Just a 3 or 4 minute ride along a wooded path in front of the West Sands Resort and then we could see the end of the runway. Definitely less than 1.8km, and although this little taxi ride only cost us 60 Baht for 3 people, we decided we could walk back. Much of Mai Khao Beach has forested land right behind the beach. The end of the runway is about the only unforested part of the beach along it's 10km length. The taxi dropped us in the shade where a number of drink stalls had set up, again showing that plane watching seems to be quite popular! 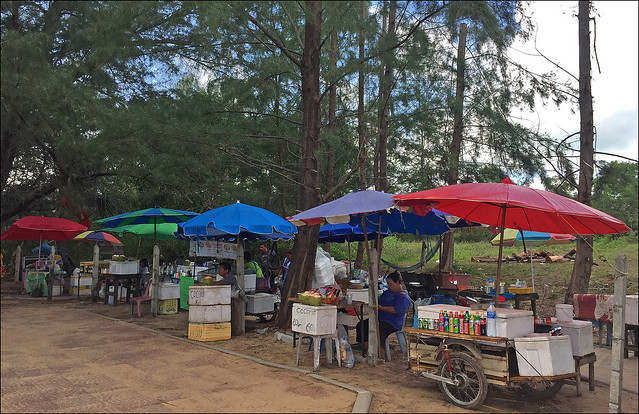 There's also a small canal emptying into the sea right here, so it's not the prettiest section of beach - the canal water did not look so clean. Nevertheless, people were lying on the beach sunbathing right here by the airport - an odd choice given that most of Mai Khao beach is clean and quiet and large parts are still undeveloped. 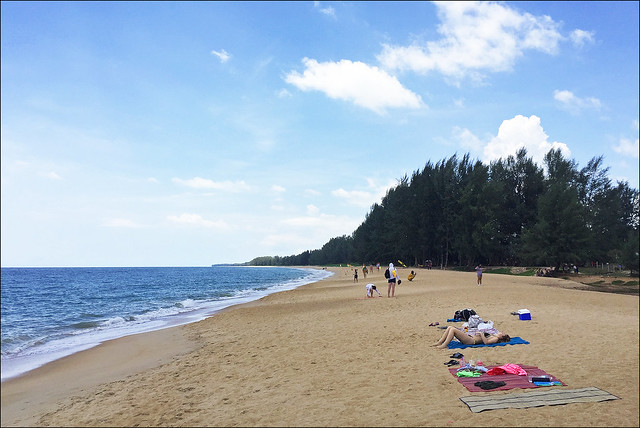 I am sure that I recall Phuket Airport 10 - 15 years ago being rather quiet. Not many flights. Well now it's very busy, and has recently been redeveloped (that was well overdue) with an International terminal and domestic terminal, but only space for 1 runway. There are flights coming and going every few minutes, so although we only stayed on the beach about 20 minutes we had 5 or 6 planes take off over the beach (over us) and several landed too. What I wanted was a photo of the kids with a plane overhead, but not too high .. smaller planes took off and were already airborne halfway down the runway, so flew over us already quite high .. not good for a photo. We waited for a larger Thai Airways plane .. could see it taxiing so we knew it was coming .. Larger plane needs more runway so would be lower when it flew over the beach ... 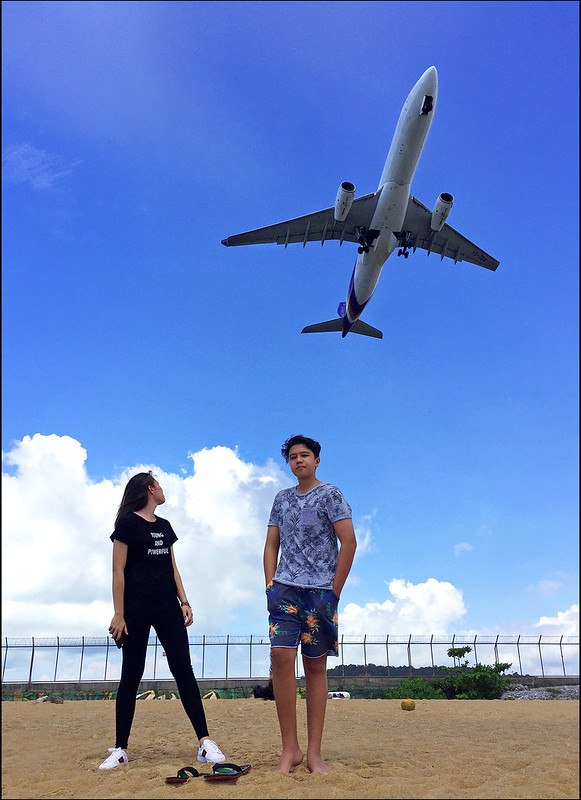 (above) Take Off from Phuket Airport!

Pretty cool. But it'll be cooler when I can be there with planes landing over the beach. Now we know where to go. I reckon we could also park further south at Nai Yang beach and walk north. The little taxi ride from where we'd parked our car was very nice, but we walked back .. only about 1km and it's a very nice pathway in front of the West Sands resort. 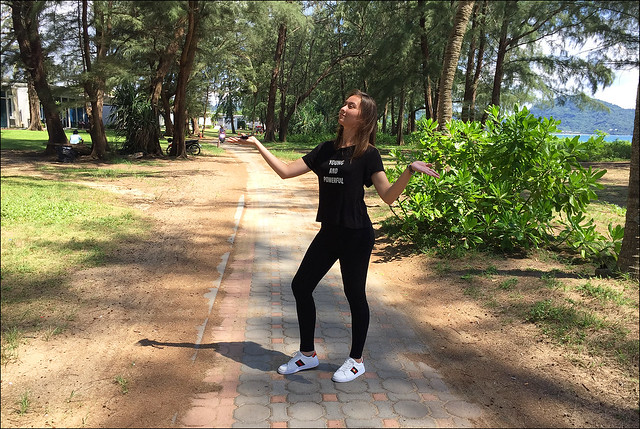 Actually the West Sands Resort looks nice - these big rooms / villas (below) are facing the pathway, so you can just walk out of your room down to the beach. Of course hotels round this area are a bit remote, I'd have my own transport if I stayed here .. not many restaurant options nearby, but there is a waterpark! 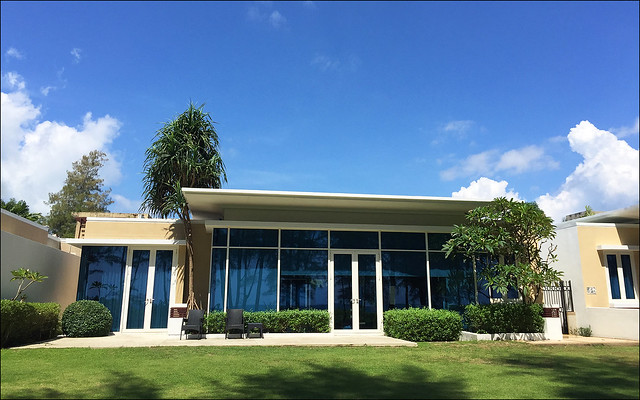 Mai Khao Beach stretches from the airport 10km north to the very north of Phuket island. Much of the beachfront land is undeveloped, although there are some big resorts like Marriott and Holiday Inn. We detoured off the beachside path onto the beach .. it's really nice! Miles of beach, hardly any people anywhere. 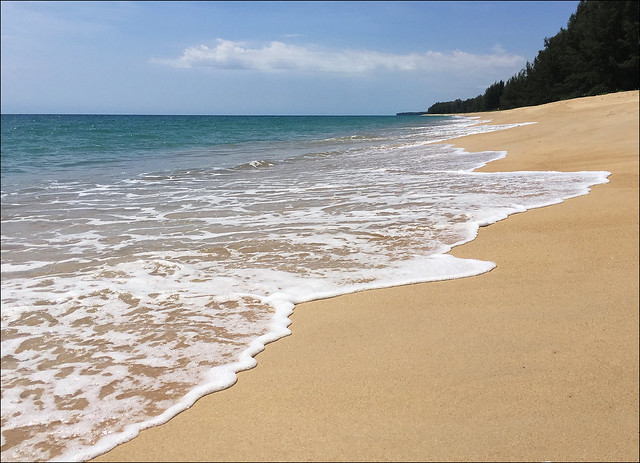 Happy to have finally visited this part of Phuket with added plane-spotting value. Hopefully I'll visit Mai Khao again soon. Need that iconic "plane landing over the beach" photo! Or an ideal place to bring a beach umbrella, beach towel and ice box full of beers :)

++Found a cool video on Youtube showing planes landing over the beach at Phuket Airport ...

You have been reading : Watching the Planes at Mai Khao Beach (Phuket Airport Beach)