The After Beach Bar - A Legendary Phuket Bar with a View!

Up on the hillside a few minutes drive from Kata Beach is what can be described as a Phuket Legend. I have meant to add this place to the blog for ages. The "After Beach Bar" has been open since ... well, since before I got to Phuket. I realised recently that I had not been for ages, and currently have a desire to get out and take photos and do some blogging (rather than being lazy), so last Friday I dashed out of work (Sunrise Divers at Karon Beach) just before 6pm, with sunset due not long after 6:30pm. Only about 10 minutes to drive there from Karon, through Kata and up the steep hill past the Andaman Cannacia Resort, round a couple of corners and there you are. Easy to get to, easy to park a moped (not so much space for a car). Anyway I don't suppose a tuk tuk will charge too much from Kata or Karon, but I do suggest renting a scooter for a day instead (if you know how to ride one and have a valid licence), it's cheaper than a single ride in a tuk tuk. 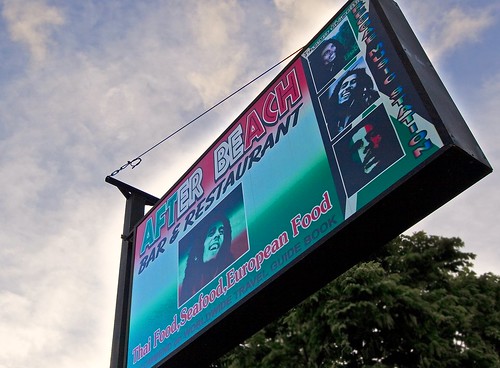 Actually, there are now 3 bar/restaurants right next to each other, all built by the roadside hanging over the side of the hill. The After Beach Bar was the first, then another called the Small Viewpoint was built next door... and just a couple of years ago a new place called Baan Chom View opened on the other side, so the original After Beach Bar is sandwiched, BUT responded by extending the deck out further into space so the view is unimpeded by the other places. I have to say the Baan Chom looked like a good place for a meal, menu was not too expensive and it looks more like a restaurant than a bar. But I could already hear the reggae coming from the After Beach Bar. It's always been a reggae place. A bar to chill, hang, skank.. and I did catch a whiff of Bob Marleys favourite herb too. Actually I had forgotten how nice this place is. I took a cold Chang (90 Baht, yes a bit expensive, but ... look at the location!) and found a seat - it was not crowded, this is low season now (May), though this is also due to "lazy tourist syndrome". A 10 minute drive? Forget it! You're missing out. Phuket is there to be explored. The After Beach Bar is well known, but you have to get there. 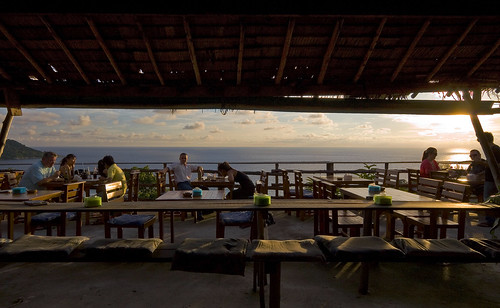 Sunset was not too far away. And my beer disappeared rather fast, so another was called for. The staff were very friendly, I do recall them being a bit more dreadlocked a few years ago.. but the music and decor is the same. People do like to joke about bars all over the world playing Bob Marley. I love it, never mind that we are in Thailand. I did live in the Caribbean for a while and learned from people there that there's a lot more to Bob Marley than "Legend"! 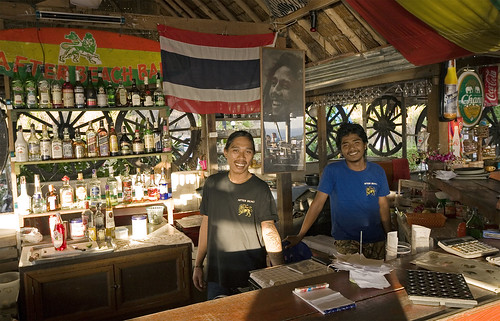 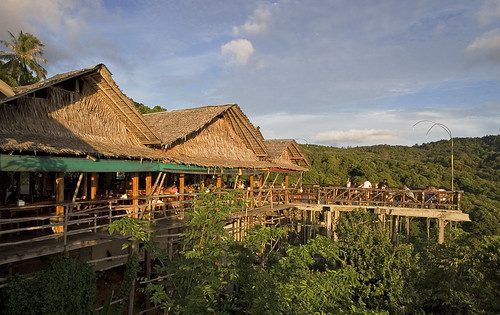 (above) The "Small Viewpoint" bar as seen from the After Beach Bar. I guess they enjoy a friendly competition. On the road when you arrive, touts from the 3 establishments are outside trying to lure you in. I was really only interested in the "original". Lots of copies in Phuket. Bags, DVDs, Hello Kitty. Must be a little annoying if you have a good business. Someone opens up an almost exact copy next door. I'm going to be back for another cold beer at the After Beach Bar sometime soon! 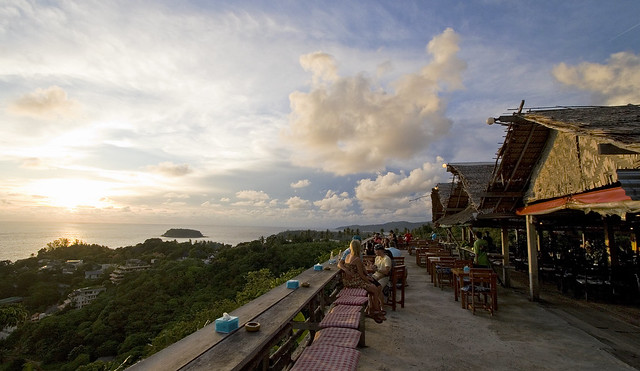 It's open all day, but surely sunset is the time to be here. I mean, at any time of day you get an ocean view and fresh air, but a bar facing west on the west coast of Phuket is best experienced on a sunny day in the late afternoon, as the sky turns orange, cold beer within easy reach. Excuse me while I light my spliff. The After Beach Bar is a great spot. 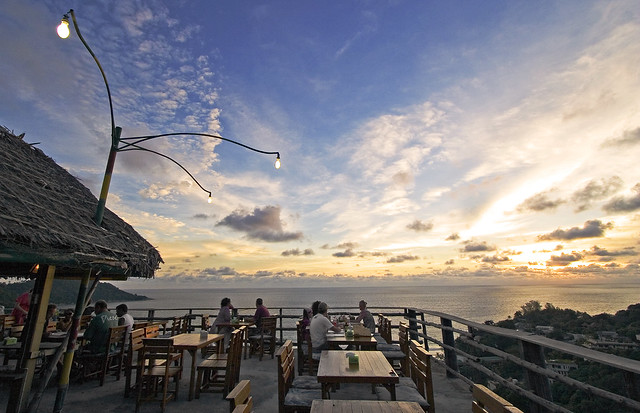 A few places near the After Beach Bar


View After Beach Bar in a larger map


You have been reading : The After Beach Bar - A Legendary Phuket Bar with a View!