I never thought we'd visit Phuket Fantasea. But now we have and, despite my continuing aversion to anything over-commercial, we will probably visit again. Fantasea is the biggest, most overtly touristy attraction in Phuket. I probably don't need to explain what it is - a huge theme park with a huge stage show, a huge buffet restaurant and plenty of shops to tempt people into spending more than just the entry fee. Phuket Fantasea opened in 1998 and is certainly one of Phuket's main tourist attractions.. and just the kind of thing that normally would not be on this blog! I like to concentrate more on the other Phuket, away from the crowds, and I am not sure if we'd have ever bought tickets to Fantasea, but then.. a couple of months ago we got a letter from our kids school - a special afternoon show for schools, special price too. Our kids would have been disappointed, so we ticked the "yes" box on the letter.

Our experience, starting on a hot afternoon, would be slightly different to most visitors. The normal show starts at 9pm. Gates open before 6pm, as there is also a buffet dinner. You can buy tickets with or without dinner. We of course had no dinner but there were some special stalls set up for drinks and snacks for the kids (and their parents!). Most of the shops and other attractions outside the main show hall, aka Palace of the Elephants, were not open, but had opened up by the time we left, just as the first tourists were arriving for the evening dinner and show. 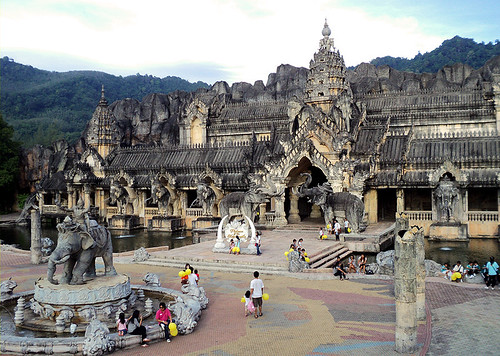 (above) - Palace of the Elephants as we saw it... but if you go at night, it might look more like the photo below. Thanks to Phuket Fantasea for permission to use this photo and the photos of the show. 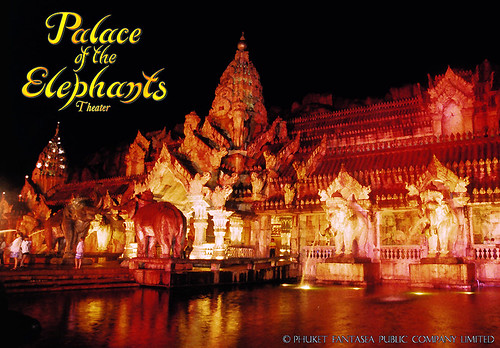 We were leaving just as darkness began to fall. The lights and the night gave the place a more magical feeling. In the heat of the afternoon as we waited for our tickets and queued to enter I had wondered if the show would be worth it! The Palace of the Elephants is quite impressive though, and the queue sends you through several checkpoints along hallways of stone. Please note - you can NOT take a camera into the show, or certainly you can NOT take photos in the show. Cameras have to be left at a checkpoint to be collected later. We took some photos before and after the show outside. I did not take my camera, but our daughter had her little Sony. She kept this in her bag but could not resist trying to take a photo during the show. Camera police were on her in seconds. We got the camera back after the show.

The show at Phuket Fantasea. The theater seats 3,000 people. The stage is about 40 meters wide. There are hundreds of performers in the show. I was not sure what to expect. Tacky or Impressive? Being a cynic, I was expecting something less than amazing, so I was happy to be wrong. The show lasts over one hour with song and dance from different regions of Thailand woven into a tale of the "Kingdom of Kamala". There are animals, acrobats, fireworks. From the first minute I think I realised.. this is not tacky, this is a good show! 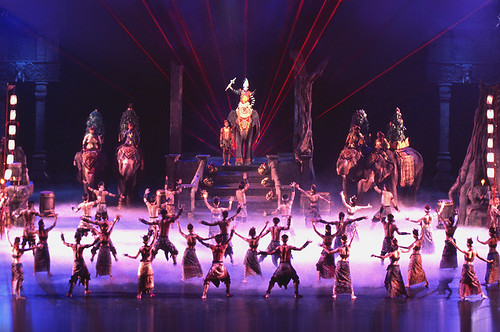 It helped to be sitting with our kids. There was a lot of "Look at that, daddy!" - acrobats swung overhead several times, and elephants were a big feature. Lots of elephants... I have to mention that some people worry about the treatment of animals in a show such as this. I have seen elephants in my travels, I have seen unhappy elephants. Well, what do I know, but the elephants in the Fantasea show looked happy to be there! 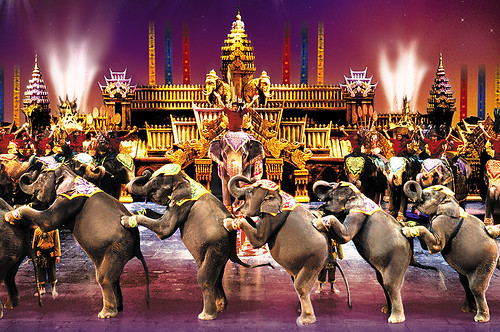 So, having avoided the Phuket Fantasea show for more than 10 years, I ended up enjoying the show. I'd say the kids enjoyed it more - a "magical" kingdom can be truly magical in the eyes of a child. As we left the theater, everything was opening up outside. Some cheap food had been laid on for us poor parents and school kids (fried rice). If you visit Fantasea you can buy a ticket including a buffet in the huge Golden Kinnaree restaurant, or you can eat elsewhere and get there in time for the show. Our kids were very happy that evening. 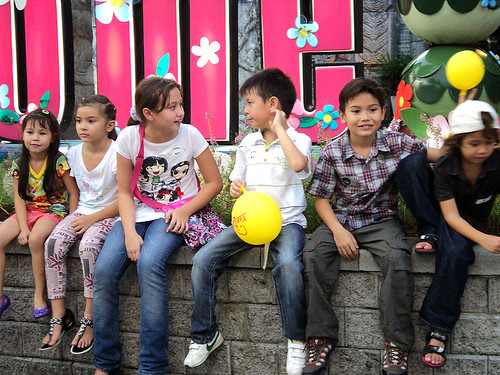 There are many things to see before or after the show, and shops to spend money. There is a room full of fairground stalls like the target practice that our daughter is attempting below. There's also a hall called the "Tiger Jungle Adventure" full of animals such as tropical birds and a rather sad looking tiger who was pacing up and down in his enclosure. 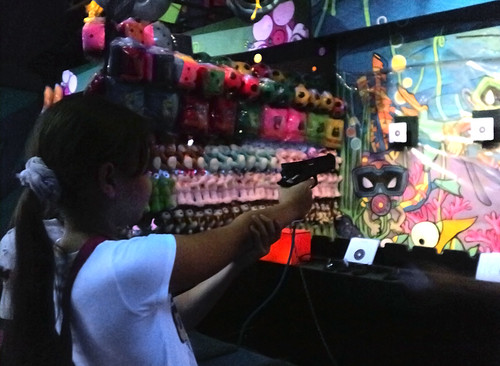 If we go again, it will be for a proper evening show. We'd skip the dinner, but it does not add to much onto the overall price so I think most people go for the whole deal. One thing you should note, Phuket Fantasea is located on the north end of Kamala beach, about a 20 minute drive from Patong, can take nearly an hour from Kata or Karon beaches. They will arrange pick ups for people (extra cost). Did we enjoy? Yes we did. I shouldn't be such a cynic. 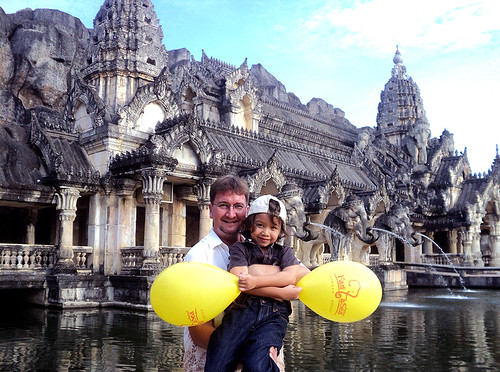 More things to do in the evening in Phuket


You have been reading : Phuket Fantasea Show - Yes, worth a visit!