Shrine of the Serene Light

Phuket Town is full of history, full of interest. I still keep stumbling upon new places... I wish there was more time to explore and less time in the office! I thought I knew the old town pretty well, but then back in 2009 I read about this shrine on the "Phuket Town Treasure Map" (a great map for exploring old town, it's made by a company called Serendipity Designs which has an office on Soi Romanee). A shrine that I did not know about? It seems I must have walked past the entrance many times, but in 2009 the entrance to the shrine was an alleyway about 4 feet wide marked by a pillar with Chinese writing (see photo here.) Felt like I was making a real discovery! The shrine itself was a bit crumbly and I was the only visitor. A couple of years ago, renovation started on the shrine, and the entrance has been widened and beautified. The renovation took ages and it only reopened officially in February 2013. So, this is an updated, re written blog post about the Shrine of the Serene Light with new 2013 photos! 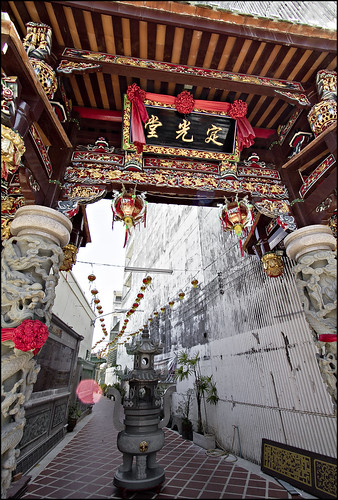 (above) Entrance to the shrine on Phang Nga road

The shrine, also called Sang Tham Shrine, is built among the houses in the old town. It was built in 1889 by a local Hokkien Chinese family. The late 19th century was a boom time for Phuket, with money pouring in from the tin mining industry. Chinese families became very important here around that time. The old town is full of Chinese influence - check the shops, the shrines, the people. If you see the Google map at the bottom of the page, you can see the shrine is really in the middle of a block or houses and shops, hidden away. There's actually a "secret" passage at the back of the shrine that leads through the kitchen of a restaurant on the next street (Thalang Road). I've walked through a couple of time. Down the alleyway from Phang Nga road is the main entrance to the shrine... 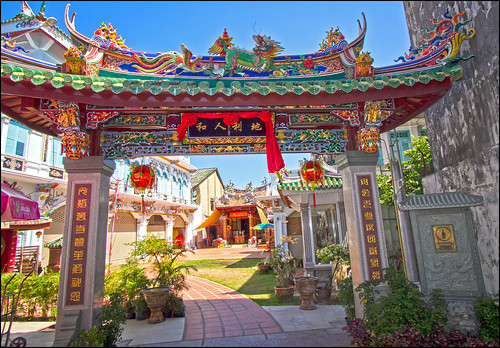 Certainly looks a lot better than it used to. And on the day I visited last month there were a few other visitors including a Chinese-Thai man from Bangkok paying his respects. A reminder to everyone about being respectful ... 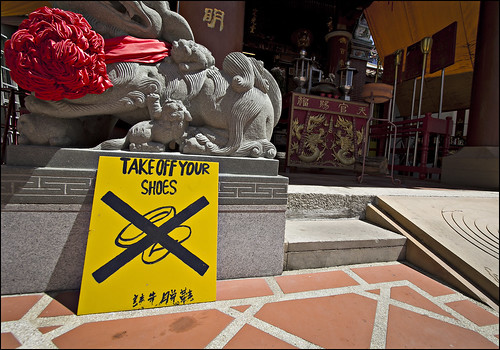 Externally, the shrine is very bright and colourful especially now that it's been fixed up and repainted. Inside the shrine, things are different. Everything is kept tidy by a live-in caretaker, but inside there has been no rebuilding or repainting. 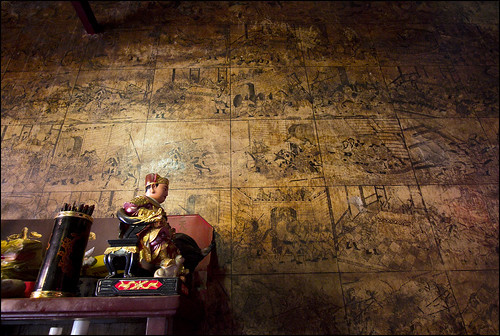 The walls are covered in murals showing old stories - the walls look old. Were they originally this colour, or is that due to over 120 years of smoke from burning incense? I am happy to see that nobody has tried to restore these old walls. The local people here have a healthy respect for tradition and history. If you walk into the shrine, with the incense that always burns, there's a huge array of statues of Chinese gods. 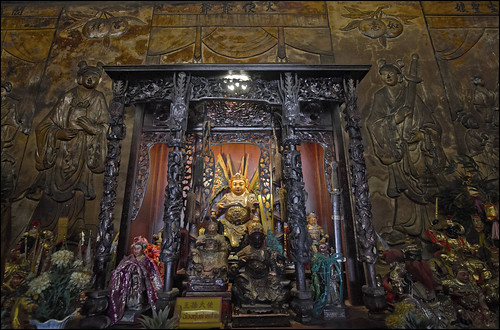 The photo below I took from behind a row of statues looking back out the entrance of the shrine ... 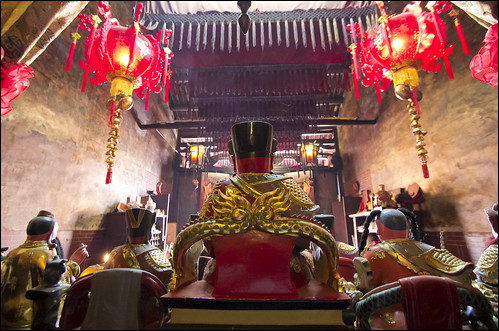 It's quite a magical place and well worth looking for. I always urge people to go take a walk around town, visit a shrine, maybe the Thai Hua museum or the Chinpracha House, get some lunch at Kopitiam or try some Roti with curry. And stop by the old Chinese herb shop on Thalang Road, join the locals for a late afternoon walk at Sapan Hin park..... Phuket Town is where it's at!


View Shrine of the Serene Light in a larger map


You have been reading : Shrine of the Serene Light