Phuket Zoo - Should You Visit? No!

Update 2021 - It seems Phuket Zoo is closing, or has closed. That's for the best - read below for comments about what the zoo was like. The Wildlife Friends Foundation has an appeal to raise funds to look after tigers and bears rescued from the zoo - please do help!

• URGENT: 11 tigers and two bears are in need of urgent rescue and rehoming


The last time I mentioned Phuket zoo on the blog was back in 2007, and I wrote "A tourist kid sat with the tiger while his dad took photos. The tiger keeper (a one armed man) poked the tiger with a stick, making him growl and bare his teeth. Would I let my kid sit next to a pissed off tiger? Er.. no."

Seems my memory is poor! And I am a hypocrite. 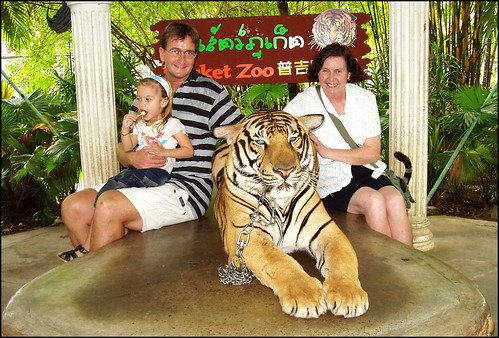 That's me, my daughter and my Mum with the same tiger in 2004 (before this blog existed). I'd forgotten about that earlier visit with the family when we took the tiger photos, watched the shows, bought ice cream for the little girl and quite possibly enjoyed the day! I knew the zoo wasn't all that clean, but most of the animals seemed happy and oh, an orangutan riding a bike and doing maths, hilarious! We went again in 2006, again enjoying things, and justifying the visit as the only opportunity the kids would get to see such animals, and it's right here in Phuket! By then we had a little son too. And we don't have the money for a family holiday to Tanzania. 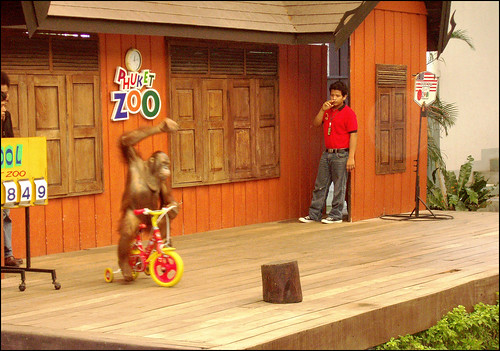 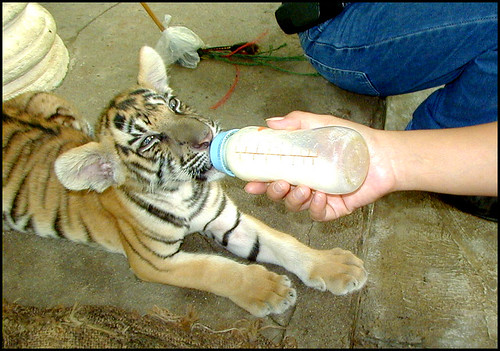 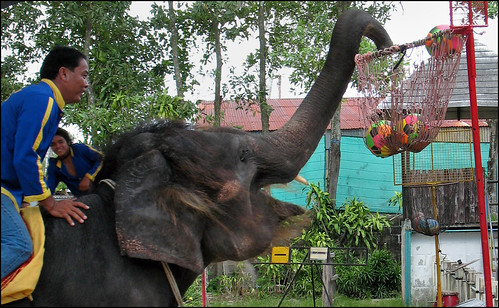 I have not been since 2007. Over the years my views on Phuket zoo have changed. I noticed a lot more of the unhappy animals which were probably there in 2004 and 2006, or maybe things got worse? Kids have been since, on school trips. I have no plan to visit again, though maybe I should, just to see for myself. I don't want to say too much bad, since I have not been there for many years.

Oh, and the crocodile show! More fun! Don't think they have lost anyone yet... 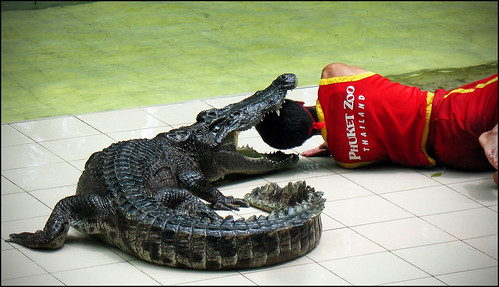 Fun or exploitation? I recall the crocs water being very green, I recall elephants chained up, though to be honest - look at the face of the elephant playing basketball, I reckon he looks happy. But .... is this leopard happy? 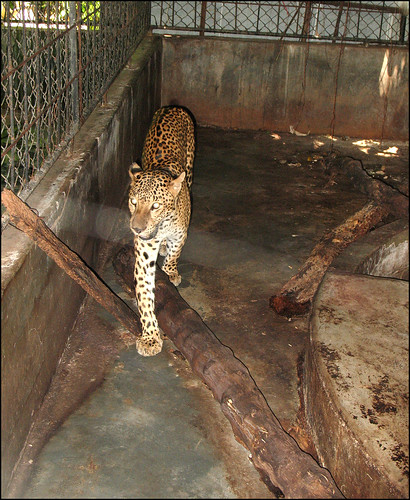 Is this bear happy? 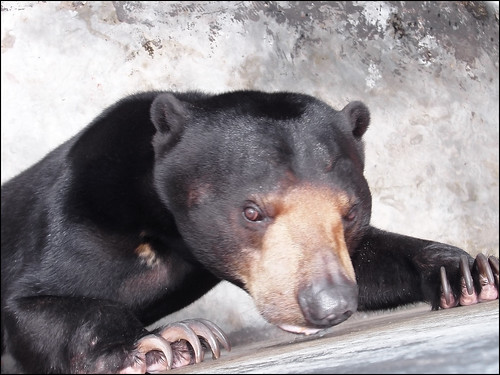 Given that my last visit was 2007, I wanted to get some updated opinions. So in December 2012 I posted on Facebook "I'd like to hear what people think about Phuket zoo". And got a lot of replies. I was hoping for a mixture of opinions - here's a selection ...

Myself and my daughter came out of there in tears, if places are making money out of animals they should treat the animals humanely..The conditions are horrendous:( I love Phuket and have been 5 times but have told everyone Not to go to the zoo...I don't find it amazing that you beat a crocodile to bleed, and its entertainment, personally I would've found it funny if the croc had of bitten his head off

Terrible. We were there a couple of months back. We were unable to have photos with many of the animals as they were "tired".....more likely drugged. The animal enclosures were dirty, no water and many of the animals were suffering from injuries and were starving. Should be closed down! I wouldn't recommend it to anyone! Many more beautiful sights to see in Phuket

Not a big fan of zoos in general but I was very disturbed by what I saw at Phuket Zoo -- the concept of using animals for entertainment is very outdated, and most of the creatures there looked unhealthy and/or agitated. The tigers being photographed looked zonked out on drugs. It provides no opportunities for visitors to learn anything about wildlife or nature. It's a sad animal prison. Avoid! 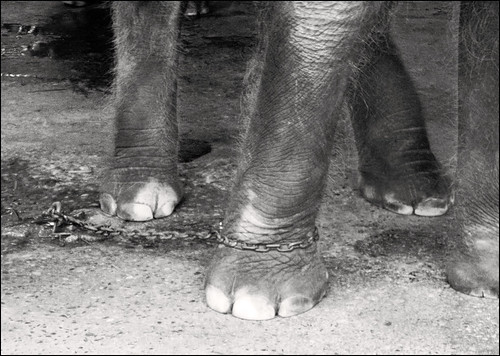 Been there twice, once with my brother & partner at the time & then again with my parents. Never again, worst experience. Hate the way they treat their animals & charge you so much for it

Oh yeh - as said above - they do charge you so much - it's a 500 Baht entry fee, though locals pay only 80 Baht. And then many people will pay more for tiger photos, snake photos, food to feed the animals etc... plus your taxi.

That poor orung u tang, he looks so sad. The poor monkeys with chains and the poor elephants look so sad to. We hated it there. 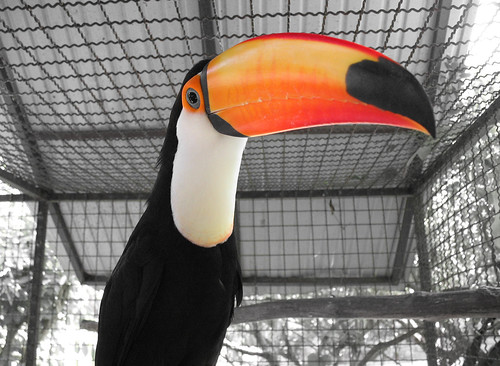 (above) At least the toucan looked fairly healthy

Phuket zoo is the only attraction on Phuket that I will never return to. It is a disgrace with animals kept in horrible conditions. It reminds me of pictures of zoos in the west from over a hundred years ago.

It was run down and the animals are not cared for and were all cramped in cages. I have to say though that we had the biggest laugh with the Orangutan who fell in love with my husband and we got some great photos. Even the little monkeys are such funny characters and we loved them but as for the rest of the zoo well ...SHAME!

Well I thought I might get at least a few people saying they had fun, but it really was pretty unanimous. These are all comments by people who have been to the zoo in recent years. I guess the place is still busy with tour groups. And I imagine there are visitors like we were the first time - ooh! a tiger! Oooh! A funny monkey! Wow! A huge snake! You can find a lot more opinions on TripAdvisor. Some are positive and I hear that animal activists post fake bad reviews. I was glad to get the opinions on my Facebook page too. Should you visit? My opinion is that the zoo is obviously not looked after very well, it seems obvious that some animals are treated poorly. Personally I will not return. Anyway, Phuket has so much to see, that unless you have never seen any animals before or never been to a zoo before, why go? In summary - do NOT visit Phuket zoo.


You have been reading : Phuket Zoo - Should You Visit? No!