It's time for the annual review on the Phuket Blog. The year 2013 (or 2556 in the old Thai calendar) is just about done. New Years Eve tomorrow and my family and I have just been discussing our options. We are not heading to any big parties. I think we all find kind of tired. A fun family movie and an early night might suit us! Followed by a nice day out somewhere on January 1st. Hope everyone has had something to be happy about this year. Best wishes for 2014 from Phuket!

Way back in January 2013, which seems like more than a year ago we did have a nice day out on January 1st including a New Year lunch at the new Dairy Hut Seafood restaurant in Phang Nga, north of Phuket Island. Later in the month I blogged about a temple between Phuket and Phang Nga that really should get more visitors - Wat Manee Sri Mahathat - featuring a huge black statue of a revered monk.

A new blog post was written about Rang Hill in Phuket Town, and later in 2013 I also updated an older blog post about the Tunk Ka Cafe which sits at the top of the hill.

In February, a new blog post about an old restaurant called Naowarat, near the main market in Phuket Town. And another post about one of those days when we just go exploring, heading to a remote corner of Phuket Island called Laem Sai. And also in February we had the Phuket Old Town Festival, which was a lot of fun.

(above) at Laem Sai, Phuket

(above) Street in old Phuket Town during the Old Town Festival

Having 2 kids, much of what appears on the blog is things we do with the kids.. so I finally wrote something this year about Phuket for Kids. Unfortunately the kids missed a great day out in March when I joined a trial speedboat tour circumnavigating Phuket Island.

(above) Best way to see Phuket? Take a boat trip right round the island!

Also in March I went to the main Phuket Town market one morning for some photos. If you want to see local life in Phuket, a market is a good place to be!

(above) at Phuket Town Market

During 2013 I have updated quite a few older blog posts, adding new photos or new information. The blog has been going since 2006, so a bit of housekeeping is needed sometimes. In April, a couple of updates were made to posts about the Shrine of the Serene Light and Koh Rang Yai island.

(above) Shrine of the Serene Light in Phuket Town

And a new blog post about the Bang Wad Reservoir in Phuket where many people, including me, go for exercise.

(above) It's a 6.5km walk/run around the reservoir. This is a side of Phuket that most visitors don't know about.

There was a lull in blogging during April and May, as I was on holiday, with my parents visiting from the UK. Quite an active holiday actually even though I intended to take it easy on them! The end of April was when we "discovered" Khao Lak. I mean, we know about Khao Lak but had never stayed there. We had a couple of nights, plus one night at Khao Sok, but liked Khao Lak and went back again for a couple of nights the very next week! During our stay we visited the tsunami memorials, Ton Prai waterfall and had a great day trip to Koh Tachai Island.

(above) Enjoying the trip to Koh Tachai

June was a month of work and school. The Thai school year starts in May, so the kids were busy, and I was working after the holidays. We found time for further explorations in Phuket Town, finding a new coffee shop called Since 1892, and a great place for a burger called Rider Cafe. And in June, we also had the Baba Weddings, celebrating the Baba / Peranakan culture in Phuket.

(above) Want a good burger? Try the Rider Cafe!

We visited Khao Lak yet again for a weekend in July, so I finally wrote a blog post about Holidays in Khao Lak. Makes a nice change from Phuket, very relaxing and only about 90 minutes drive from home. And we got lucky with the low season weather.

(above) Khao Lak beach in July

During July and August, lots of new things ... we visited the Phuket Botanic Garden which had opened in 2012, also the Phuket Bird Park, which opened earlier this year and we had a lovely evening on a sunset / dinner cruise to Coral Island with the MV Sai Mai.

(above) Sunset trip with the MV Sai Mai

(above) Palm garden at the Phuket Botanic Garden

(above) My kids enjoyed going to the Phuket Wake Park quite often this year :)

The year moves on. A couple of new blog posts in September - a whole page devoted to a single road! Not Bangla road in Patong. No, that's not my Phuket. For me, the heart of Phuket is Thalang Road in Phuket Town. And a post for monkey lovers - Where to See Monkeys in Phuket :)

Later in September we had a family holiday away from Phuket, mostly on the east coast of Thailand around Chumphon and Hua Hin. A nice area. I came back to Phuket in early October with my wife and we spent several days painting our house while the kids stayed with family in Chumphon.

Main event in October was the Phuket vegetarian festival. 3 blog posts this year about my favourite time of year .. despite the weather not being great at the start of the festival. Firstly - a post about the food, then 2 posts with photos from the Jui Tui Shrine street procession, and the Kathu Shrine procession.

(above) Some pictures from the 2013 Phuket Vegetarian festival

I gotta be honest, since the festival, since high season began and the kids were back at school I have had little time for blogging or taking photos. Indeed, I sold my camera recently, and have just an iPhone right now for photos. Will get a new camera sometime in the new year. The last couple of months has been all about school, early mornings, work and occasional days off which, while I would like to get out and see things, often end up as lazy days at home! One great evening we did have earlier this month was at the Phuket Siam Niramit Show. 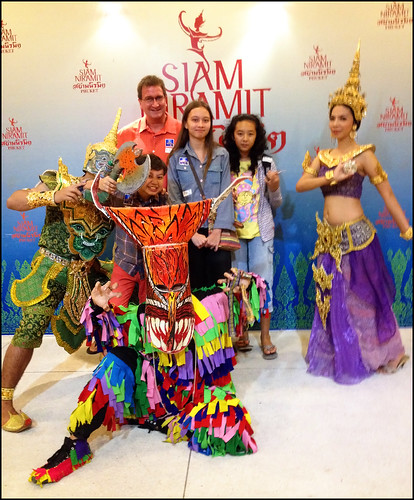 (above) At Siam Niramit - we'll go there again!

2013 is done. I am hoping for a great 2014. Hoping that Thai politics, if you can call it that, calms down a bit. Hoping my kids do well at school, hoping for good health for all my family. You know, same things everyone hopes for. Hope if you are reading this, that you'll click through a few links and read more, and then come back and read something new later. Please do follow me on Twitter. Lots more photos on my Flickr page and I post things most days on Instagram too! Many thanks. See you on the other side in 2014!


You have been reading : Review of 2013 on the Phuket Blog