It has been mentioned before, but I just want to say .. this blog is still very much a hobby, although it's been online since 2006. I work all week running a Phuket dive shop, take some holidays in the low season, and have a family too - sometimes the blog has to be put on the back burner. A normal high season week like we're having now is all about work, school, routine .. just like anyone else's normal life. We sometimes have days out at the weekend, but often the kids are doing activities like music or taekwondo so we often have days at home with maybe a lunch out somewhere. A tourist on holiday in Phuket for 2 weeks can see as much as we see in 3 months! And sometimes when I have a day off in high season, I'm tired and don't fancy exploring too much. Such was the case last Saturday. Kids did music, we did some cleaning and gardening and then I took an afternoon nap aided by a couple of cold beers. Around 3pm, my dear wife was getting bored. Let's go out? But where? Kids have taekwondo at 5pm, we can't do much ... She reminded me of something I had mentioned the week before. I'd been looking at Phuket on Google Earth and seen a coastal road on the northeast coast, a road that I was sure we'd never seen before. Phuket has a lot of small back roads which wind through rubber plantations, pineapple fields or shrimp farms. So we set off for a drive. Sometimes we do this .. just "go for a drive" and see where we end up!

So, we drove north, u-turned at the airport junction and turned off following the signs for Mission Hills Golf Resort, but turned onto a side road heading away from the resort. I was just following the map in my head .. not quite sure if we were on the right road, but soon enough realised that we had been this way before about 10 years ago! The road wound through farmland, rubber trees and a place called Laem Sai Garden Resort that I can barely find online. And then we were by the water. A new jetty has been built recently, so we thought we'd take a walk down to the end of the jetty. 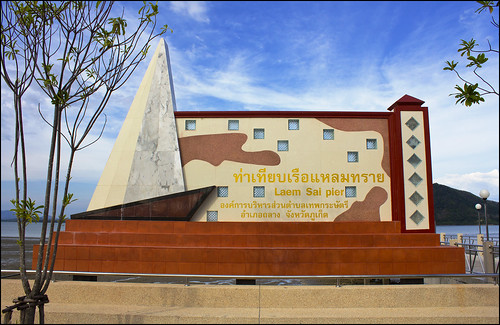 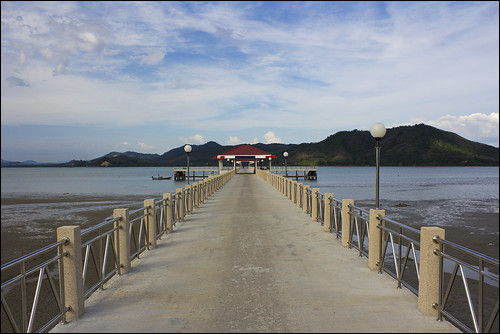 We know some quiet areas of Phuket. Only a few km from Laem Sai to the south is Bang Rong, where you find a busy jetty, boats heading to Koh Yao Noi, and a floating restaurant. We consider that a quiet place. Laem Sai a different planet - it's almost totally untouched. No hotels, no big houses, no villa developments. Sure there's no beach either - the east coast of Phuket is largely mangroves and mud. And the land you can see off the jetty is actually Phang Nga province, not Phuket. A catamaran cruised by, free to roam the seas. I want a boat one day. 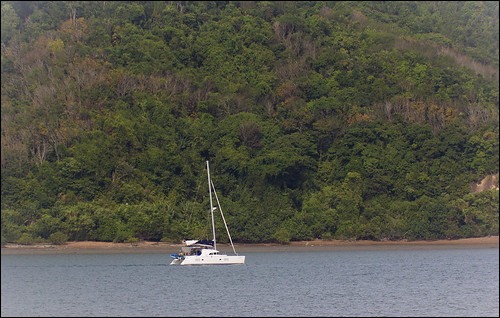 Not far from the new jetty is the old jetty and it's still being used by longtail boats. What a great view! 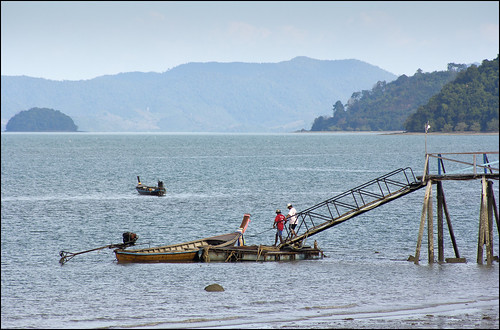 On afternoons like this we remember why we live here and stop moaning about too much work, too much housework, too many tests at school. I am happy to be out exploring just for a short while and happy to see our kids enjoying it too! Nice to find somewhere new. There is a small restaurant there - not sure of the name, or if it has a name! We'd already lunched and were not hanging around too long as we had to get back for taekwondo .. we'll try the restaurant another time.

Down at the end of the jetty, people were fishing ... 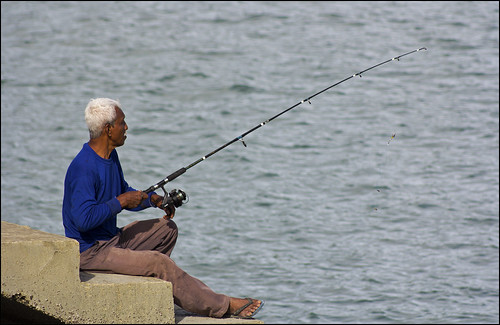 We then noticed that Laem Sai is right on the flight path of Phuket International Airport - the end of the runway is only about 5km away. A couple of planes took off over our heads as we walked on the jetty. 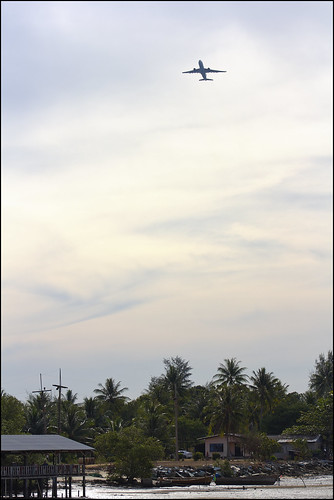 This is one of the quietest places we've been in Phuket, and I was glad to (re)discover Laem Sai. Sometimes, you can just drive. See where the road leads. Phuket is so often slated at being too crowded, too touristy, too developed. This blog started with the idea to show the real Phuket and show that Phuket is so much more than tourism. I hope that has been shown by now!


You have been reading : Laem Sai - An Unexplored Corner of Phuket