Food at the Phuket Vegetarian Festival

I actually was a vegetarian (except for fish, I couldn't have lived as a student without tinned tuna) for quite a few years in my teens until I was 24. We had "nut roast" in our house for Christmas (well, my Dad had meat!) and the smell of frying bacon in the morning in my student house at university made me feel sick. I think it started when I was 16 and went to India. Sometimes the meat dishes contained unidentifiable pieces of meat, so the vegetable dishes were safer .. and tasty! My vegetarianism stopped with a bang when I set off in February 1993 on a 6 month trans-Africa expedition with about 15 other people - an adventure trip run by a company called Exodus. First day - question .. any vegetarians in the group? Me. Just me. So I started on meat again and never looked back! I like meat. And I like beer. Both of which are not allowed if you want to stick to the special diet during the 9 day vegetarian festival. Actually only some people do it for 9 days. Many just do it for the last 3 days. And .. please note - if you are a tourist, visiting Phuket, you can eat what you want. Almost all restaurants are open as normal for steak, pizza, Thai food with meat, burgers, bacon and more bacon. It's only a part of the Phuket population who are involved in the vegetarian festival which has Chinese origins. I normally try to stick to the vegetarian diet for the whole festival. Might sneak a beer or two, but no meat for 9 days. So for lunch I have something like this ... 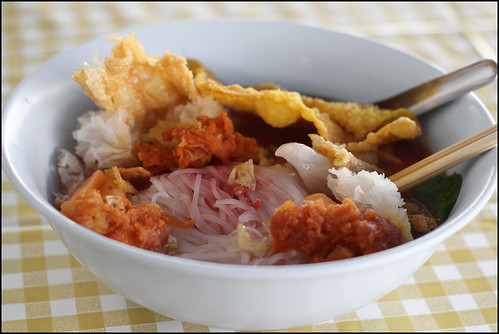 Actually around the main beach areas, it's not so easy to find vegetarian food (vegetarian in Thai = เจ pronounced "Jay") ... where I work in Karon I have to drive about 1km to find a restaurant doing this food, and there are half a dozen food stalls along the back road (Patak road) in the Kata and Karon beach area. Same in Patong, you can find places doing the vegetarian food on the back roads. The place I normally go for lunch is opposite Karon post office. Easy to spot the right kind of restaurant as they have yellow flags outside. The noodle dish in the photo above is called Yentafo, and normally comes with meat - this one is all tofu and "textured vegetable protein". The same restaurant also does meals with rice such as the fried rice and the phad kaprow below. 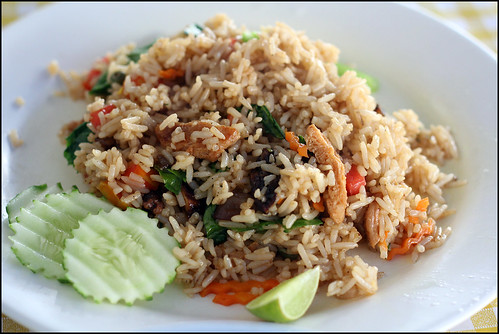 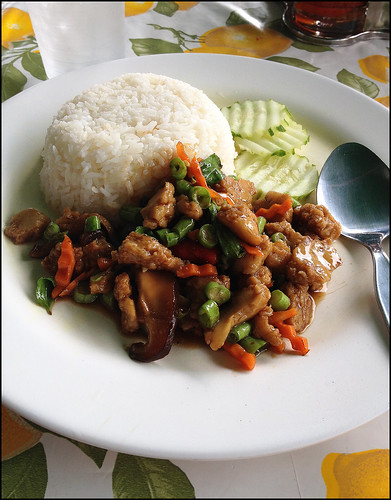 As you can see, the kaprow dish looks meaty, but it's only tofu. They can make just about any Thai dish with tofu instead of meat, though this kind of food is much harder to find outside the festival. You can normally find vegetarian food in Phuket, but sometimes you are limited to mixed veg or fried rice without meat! The vegetarian festival is way more than just the food of course, there are street processions, and there is weird face piercing and fire walking - have a look at Phuket Vegetarian Festival - My Favourite Time of Year. The food, I must point out, is actually vegan - no meat, no dairy, no eggs, not even a splash of fish sauce. There is also a rule that the special food can have no garlic or onions. So once per year I basically go vegan for about 9 days ... which leaves me hungry for bacon and beef at the end of the festival. Well, it can't hurt to change diet now and then!

So where can you find lots of good vegetarian food during the vegetarian festival? Well.... Phuket Town is the place to be. There are several big Chinese shrines in town and a large proportion of the population is Thai-Chinese. So many of the restaurants in town change menu during the festival and do only vegetarian food. Plus there are loads of street stalls doing different foods and snacks. Ranong Road between the market and Jui Tui shrine is closed to traffic and is lined with stalls - see below : 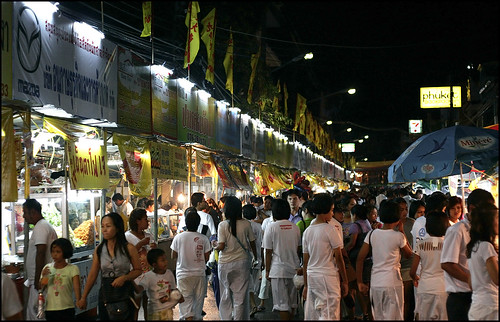 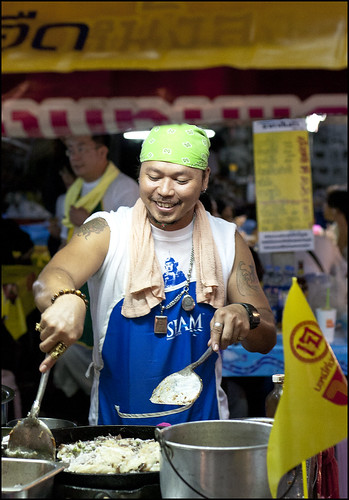 Biggest selling snack during the festival? Got to be spring rolls ("popia" in Thai). They normally cost about 10 Baht each, sometimes 3 for 20 Baht and normally sold with some sauce and some cucumber. I can eat these until I burst. So don't think of the vegetarian festival as a way to lose weight :) 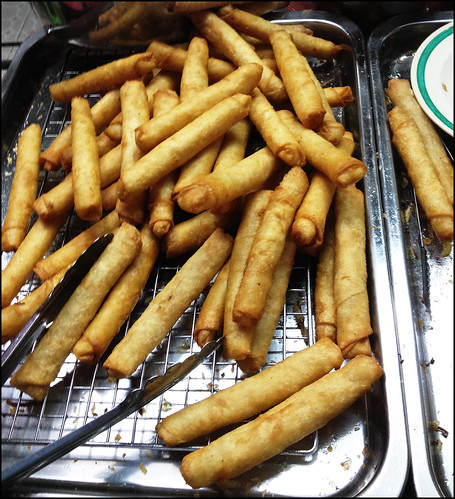 (above) Spring rolls. I want some.

In Phuket Town, well you can find plenty of vegetarian food. I have a couple of favourite restaurants. On Thalang Road there is Kopitiam, which is open year round selling lots of great food (the Phuket style pork is lovely!) .. During the festival they do only vegetarian food and are not open in the night, only during the day. 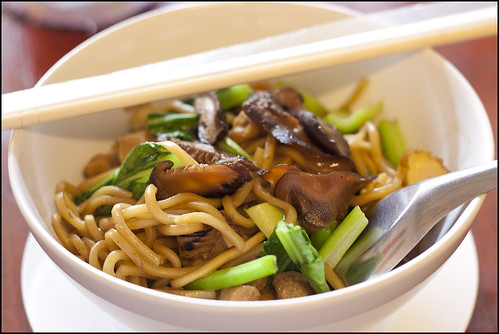 (above) Vegetarian noodles at Kopitiam in Phuket Town

And one other place that we just discovered last year, and have been to all during the year for non-vegetarian food, and again this year for vegetarian food - a little restaurant called Naowarat near the market. They have about 20 different dishes ready made or you can order. Not sure anyone speaks English there though. Owned by an old (ish) lady who seems to know everyone in town and it's a popular place though it only has about 6 tables! Servings are 30 Baht each .. so it's cheap too! Here's a typical table of food : 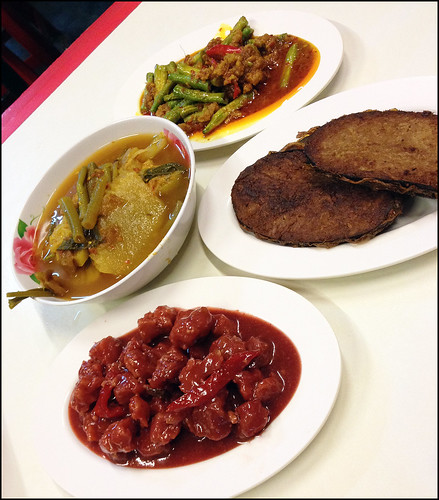 And here's a selection of what they sell ... 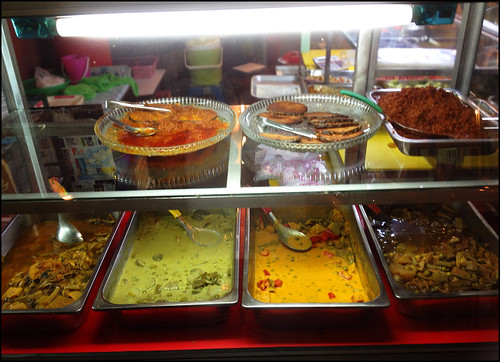 On that table you have something to really set your taste buds alight, and it's all vegetarian!

If we don't head to Phuket Town for some evening food, we just drive a few minutes to Kathu shrine. During the festival we can hear the shrine from our house when they set off firecrackers or have entertainment in the evenings. It's our local Chinese shrine :) Well, Kathu village is normally pretty quiet and even for much of the festival it's quiet. There are a few food stalls and one place close to the shrine that does Hokkien noodles. The most popular stall does fresh spring rolls (not fried), called "popia sot" in Thai. 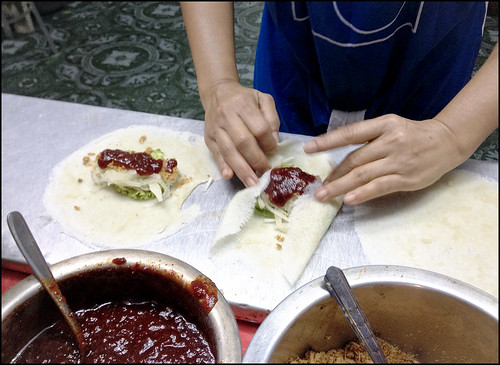 We also sometimes drive a tiny bit further to Sam Kong shrine which is on the north side of Phuket Town. The road near the shrine is packed with food stalls. I try every year to stick to the diet for the whole festival, at least in terms of the food. One or two other rules may get broken! Right now I am dreaming of a bacon burger and a pint of Guinness! I mean, this food is OK for a week, but, apologies to vegetarians, I do like meat! Next blog post will feature some photos from shrines and processions during the Phuket vegetarian festival 2013 - watch out, might be some scary pictures!


You have been reading : Food at the Phuket Vegetarian Festival