So, as I was saying a few days ago in Part 1 of my Phuket vegetarian festival 2013 report... Due to a mix of rainy weather, tiredness (staying up until after 2am painting our living room 2 nights in a row) and general apathy, I was really not feeling any great excitement for the vegetarian festival this year. Hard to summon up the energy for an early morning at the shrine when it's drizzly and I had 4 hours sleep. So that changed on Friday 11th October when I was in Phuket Town for the big Jui Tui Shrine procession. I think it was all the firecrackers that woke me up! Now I was looking forward to an early morning at Kathu shrine on Saturday 12th October. Kathu is the area of Phuket where I live, between Phuket Town and Patong beach. It's a historical area and was the center of the tin mining industry in Phuket in the mid 19th century, maybe even the most important town in Phuket for a while before Phuket Town became important due to easy access to the sea via the wide Bang Yai canal (which is not wide any more!). The canal did reach as far as Kathu, but was smaller there, only navigable by small canoes. Kathu was where Chinese miners were camped sometime after 1825 when Chinese theater artists came to perform, got sick and cured themselves by sticking to a special vegetarian diet. And thus the festival was born.

Well, I wanted to be there earlier than 6am, but I am not a morning person! So, got there just after 6am. For Kathu, that's a bit late. The shrine was packed already, and many of the Ma Song were already pierced and ready to go. First guy I saw had candle piercings ... 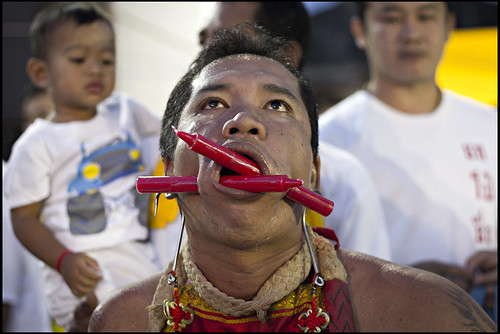 Oh, and hooks through his ears too. Many other piercings were already done. Damn, I really do need to wake up 5am next year! They start early in Kathu, as the procession starts here and they walk all the way into town and back. From the shrine into town as far as Sapan Hin shrine is about 10km each way. On a hot sunny morning, do you want to walk 20km with this in your face? 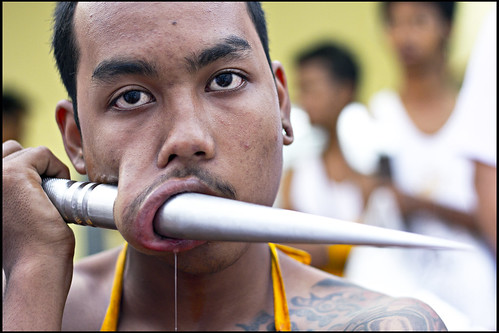 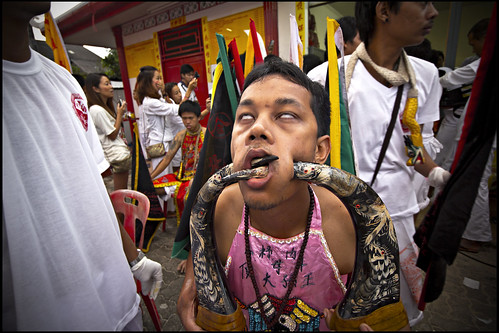 (above) I was hoping for the eyes-rolled shot here .. and I hope that's not real ivory. Historical note - Phuket used to be a major port for the shipment of elephants to India. The province was full of wild elephants 200 years ago and the next province Phang Nga is thought to maybe mean "broken elephant tusk". 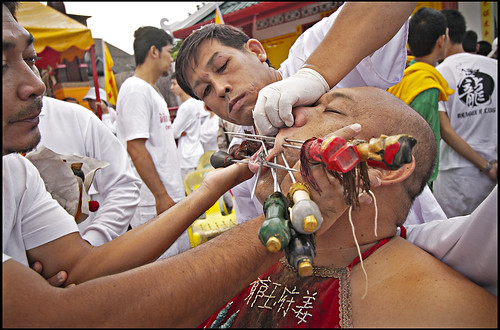 (above) Getting pierced. Some of the Ma Song were still getting their faces done after 6am. This guy we see often around Kathu and we always stop for a chat. I see him every year with different piercings. Here he in 2012, and 2010. In real life, he's a local policeman .. see here.

And then, time for the main procession to begin. Groups of young men gather to carry the statues of the gods. Many of the pierced Ma Song have already left. Drums sound inside the shrine, and blessings are given to those who will carry the gods ... 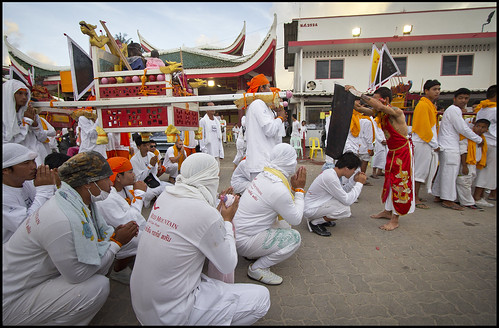 My friend Tim and I wondered who is actually in charge here.. no specific order seems to be given to start, but everyone knows their place. The noise, colour, faces and traditions of this festival never cease to amaze me. I am totally not sure if the Ma Song are for real. Are they possessed, in a trance, very good actors? The guy below I see every year. In normal life he looks like an average guy. On the day of the Kathu procession he appears from the shrine bent over like an old, old man. 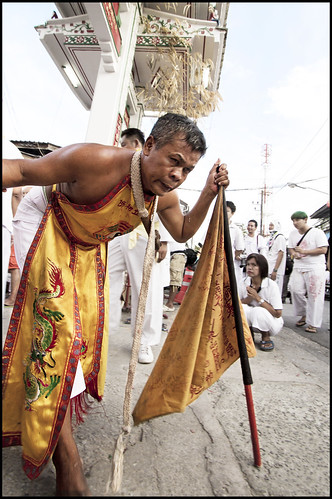 The guy being held aloft seems to be the most important of the Ma Song in Kathu. He's carried through the streets, though I have seen him get off his perch a couple of times. He leads the procession of the gods out of the shrine. 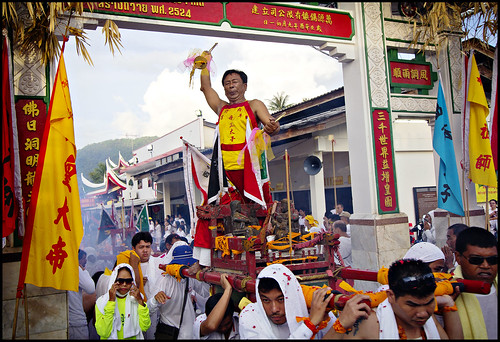 And then follows a crazy 25 minutes when I take about 200 photos as the emperor god statues are carried through Kathu village through a constant barrage of firecrackers either thrown or held out on bamboo poles by the local residents of Kathu. Next time, aside from waking up earlier... earplugs and a facemask. Essential. 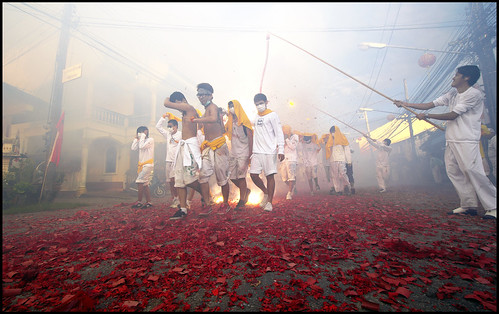 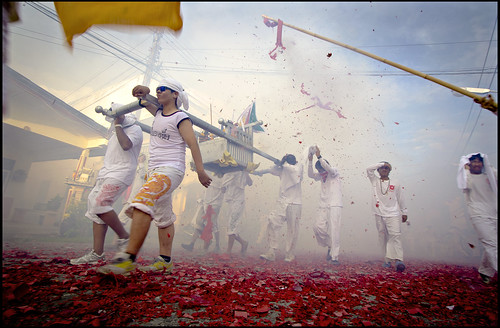 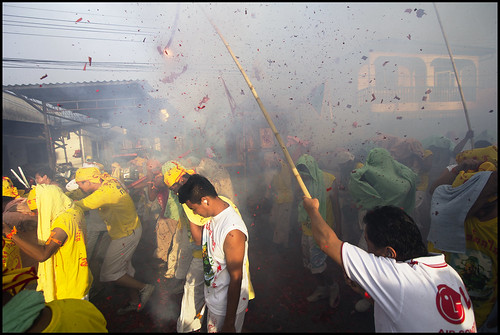 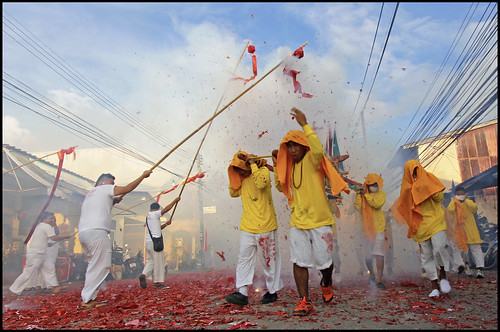 It's madness! And now they head off through the old village of Kathu towards Phuket Town. On this day I decided not to follow them. Maybe next year I'll do a 20km walk with the procession. That should be an experience. I bought myself a set of white trousers and shirt this year intending to use them on the crazy last night of the festival in town, but never went. Might be ideal for a long walk on the day of next years Kathu shrine procession. The festival next year looks like it will be from September 23rd - October 3rd. There is so much going on during the processions, so much energy, that the quiet moments are sometimes overlooked. Last photo for 2013 ... in Kathu village, a female Ma Song stops to bless a small child. 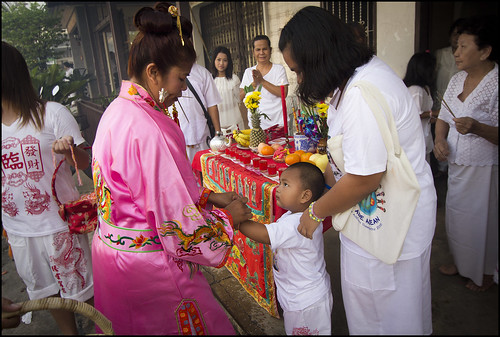 If you can tell me what that young boy is thinking .. I might better understand this festival. Until next year.


You have been reading : 2013 Phuket Vegetarian Festival (Part 2)