I'd been meaning to explore the big central market in Phuket for a long time. I do like markets - it's where you see real local life, or at least one side of local life. The main market is on Ranong road in the older section of Phuket Town, and when I first came to Phuket in 1999, I walked around the town since the first few nights in Phuket were spent in town. The central market back then was an old building, not sure when it was built, but could be close to 100 years ago. I never went inside. The smell was off-putting. This was an old, old, place with old, old smells. Thankfully, the old central market was finally demolished about 5 years ago, and a new one built which finally opened in 2010. There are of course local markets all over Phuket Island, but the main market is still in Phuket Town.

You can't park on the road near the market, it's full of stalls and small shops and local buses and things being loaded and unloaded. I parked on Krabi road near the Thai Hua Museum, and just west of the museum is a very handy alleyway that cuts through 2 blocks direct to the market... 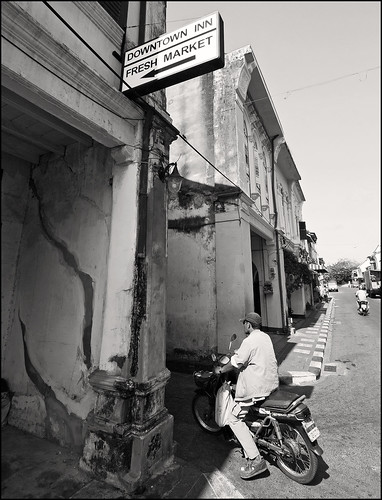 And it's a busy little alleyway! I hung around for 10 minutes to take a few photos. Big pick up trucks were squeezing through, heading out from the market, with only a few inches to spare on each side. These streets were not built with a Toyota Hilux in mind! Phuket Town has a lot of little shortcuts, and this is one of the most useful. 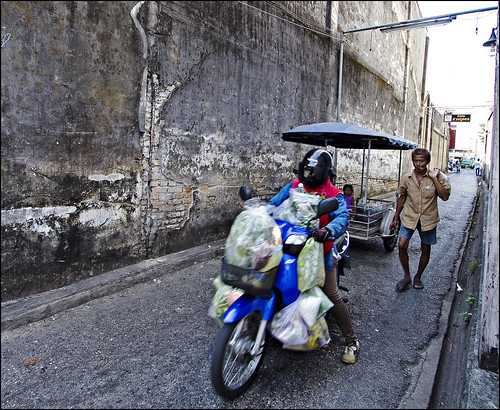 Approaching the market down this narrow street, you first come to an outdoor market area. The streets around the main market building are full of colour, stalls selling fruits and vegetables. People were loading vehicles with baskets full of bananas, papayas, oranges, pineapples, coconuts .... 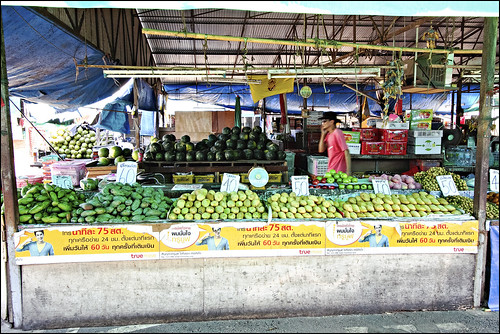 The streets in this area of course get a bit scruffy, but help is at hand. The market area keeps itself as tidy as possible. I saw several people hard at work inside and outside ... 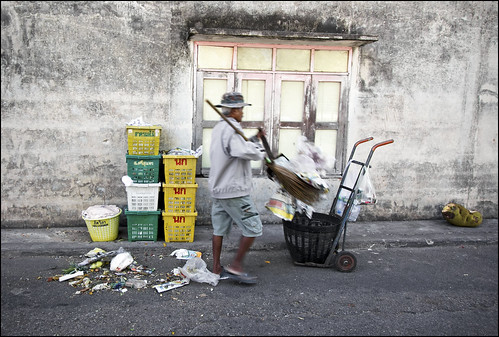 The alley leads right to the entrance of the central market, though of course you can also get there along Ranong road. I had originally intended to get there earlier, but it was after 10am, and already hot with the sun high in the sky. It would be better to get there a bit earlier for photos and to avoid the heat. The street outside the market is a continually moving ballet. 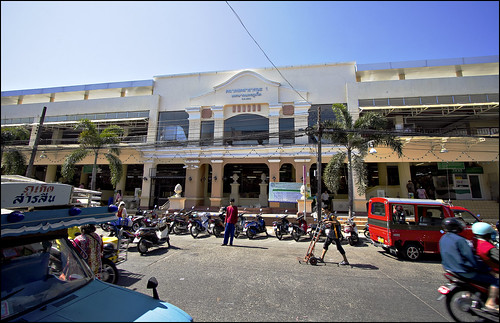 So I wandered inside. The main entrance has several sets of stairs leading to 3 different levels. There are signs in English which is very helpful for non Thai speaking market enthusiasts. I like to find a place to watch people coming and going. Markets are great for people watching. The egg man arrived with a pick-up full of eggs, and he took repeated journeys between truck and market stall. Down all those steps. With all those eggs. It's all about balance. 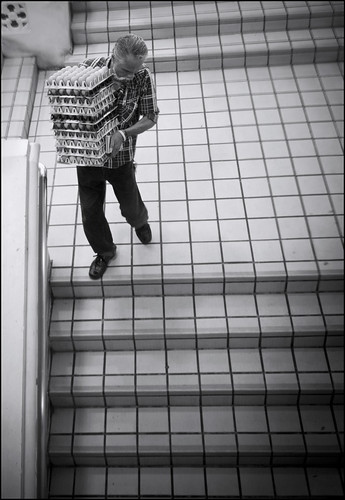 Most of one floor seems to be all about meat of various kinds. Phuket of course has plenty of seafood available. Our family eats lots of fish. It would take a fair sized family to manage one of the fish on the stall below. Most local markets in Phuket also sell fish, prawns, squid and shellfish. The people of Phuket, Phang Nga and Krabi areas have long been fishing folk. As a diver I wish they'd fish a bit less in some areas, but seafood is a traditional staple for locals and in demand from tourists so the fishing industry remains strong. 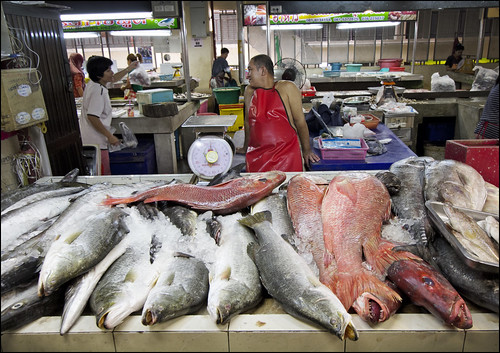 The fish and seafood stalls need ice. Fresh seafood is great. Old seafood is a disaster. I had to dodge out the way of the ice men several times. Buckets full of ice arriving to keep those fish cool.... 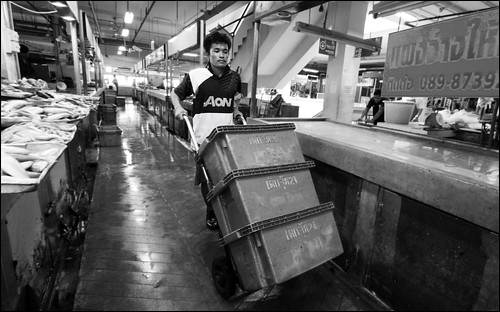 Any market anywhere is a riot of colours, smells, people, and things you don't get "back home". Thai cooking is more about the herbs, spices and special blends of ingredients that can be added to vegetables, meat, maybe coconut milk, and wow! You get a wonderful variety of tastes. This stall below is selling a lot of things used in local Phuket cooking - dried chilies, dried shrimp, dried fish combined with the right spices can make all kind of dishes. The dried shrimp in particular is an oft-used ingredient in Phuket and Phang Nga. 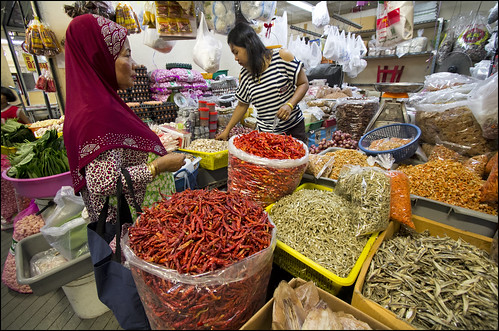 And this shop (below) adds the spice - several different curry pastes for sale, the magic ingredient in Thai curries. People do sometimes make their own curry paste, but it's actually not that easy, and most people buy the curry pastes from a specialist in the local market... 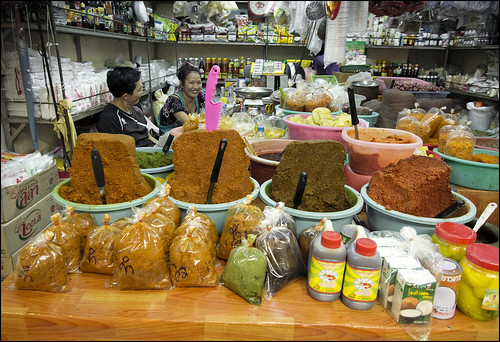 And the market is also the place to pick up some vegetables and a smile ... 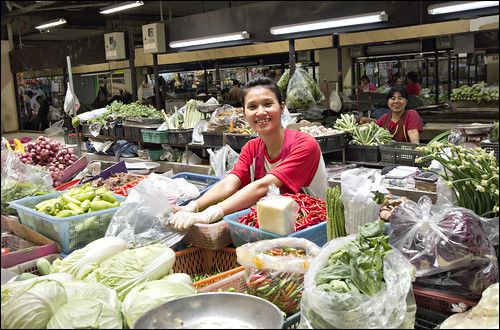 Outside the market on Ranong Road is where local buses are found, destination anywhere! It's a shame that Phuket does not have a comprehensive public transport system. You can get a bus from Phuket Town to all over the island (and from there, back again). But from Karon to Patong beach? From Patong to Surin Beach? No bus. Only taxis and tuk tuks. Well, I hope that will change. From the street outside the market you can head out all over Phuket ... 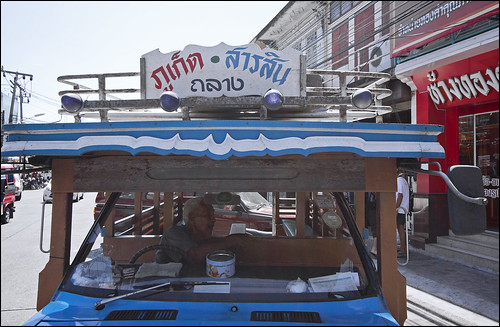 The bus above? Takes you to Sarasin, where you find the bridge to the mainland. The bus below? Heads off to the northeast coast to Bang Rong, where there's a great floating restaurant in the mangroves. The old central market in Phuket Town is still the center of Phuket for local people. 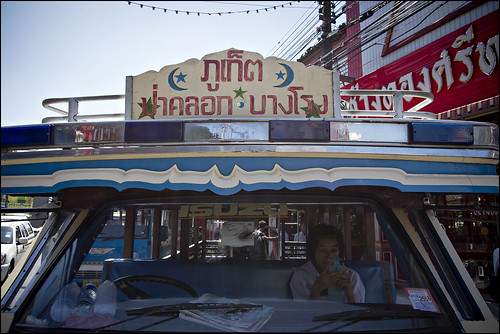 This is not at all a tourist market, this is the center of Phuket life, well it certainly was until 15 years ago. A traditional market with fresh produce has to compete with supermarkets, and Phuket has a lot of these now, mostly opened in the last 10 years, but the local markets seem as busy as ever, a great place to get a taste of the real Phuket.


You have been reading : Phuket Town Central Fresh Food Market