Well, the 2013 Phuket Vegetarian Festival finished a few days ago, and I have been spending a few evenings sorting out photos. I was more or less unaware of this festival until about 2005. Guess I was living in a box. When this blog started in 2006, that's when my family and I started to explore Phuket and the surrounding area a lot more and get a lot more involved in the local culture. And over the last 7 years, the vegetarian festival in particular has fascinated me. I've been at shrines before 6am, attended many street processions, watched firewalking and bladed ladder climbing, and every year do my best to (maybe not 100%) stick to the vegan diet and rules of the festival. For a good introduction to the festival and links to many previous blog posts see The Amazing Phuket Vegetarian Festival.

I would normally try to attend at least 3 - 4 events during the festival, get up early several times to be at shrines to watch face piercing .. last year I was at Sapam, Sam Kong and Kathu shrines around 6am, but this year I had trouble to summon up the enthusiasm of previous years. Seen too much? Or maybe it was the weather - we had wet days from the 4th to the 8th October. I did wake up early one morning, but heard the rain and went back to sleep. Also my wife and I had spent a few days painting our house, and worked into the early hours of the morning to get it done - slept at 2am on the 3rd and 3am on the 4th, so the idea of 5:30am alarms was not appealing! But finally the weather changed, so I hit the town before 7am on October 11th to watch the street procession from Jui Tui shrine, probably the biggest procession and featuring many female Ma Song with piercings too. It was a lovely sunny morning in town. Took me a while to get into the photography mood, but I figured out of 400 photos there had to be some good ones! 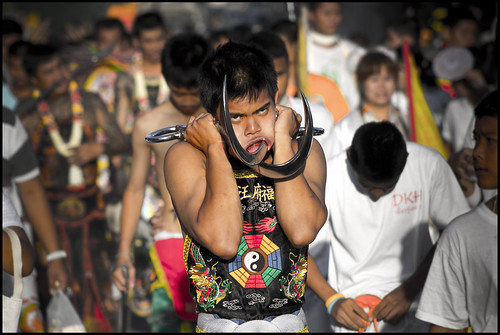 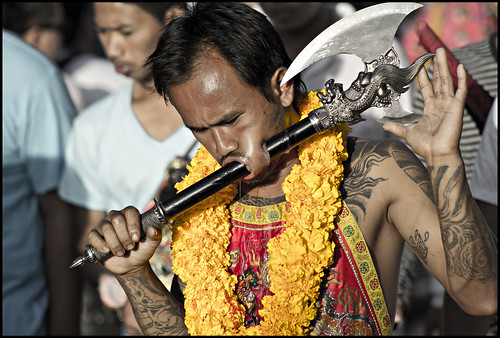 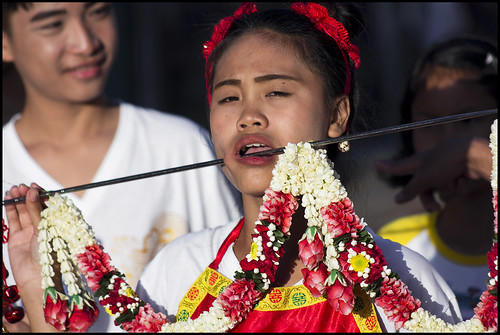 I started off trying to photograph individual faces with a 70-300mm zoom lens, but the Jui Tui procession is so crowded, at times the pierced Ma Song and helpers were bunched tightly together and barely able to squeeze through the crowds along the narrow old-town roads, it was hard to get a picture. At times you just have to sit back and take in the spectacle instead of looking at things through a viewfinder! This close to the action, a wide angle lens is useful .. I followed the procession a little way onto Thalang Road and parked myself near the old herb shop. 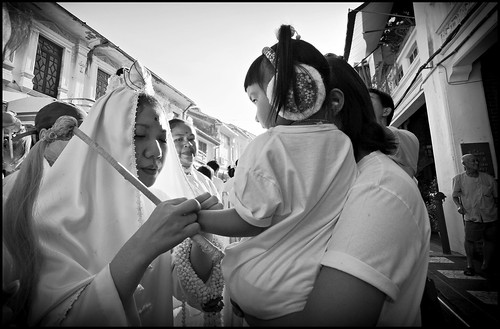 (above) It's not all face piercing! I wanted to try this year and get more pictures like this. A Ma Song tying a string to the wrist of a small child who is amazed at what's going on. The old traditions are passed on from generation to generation. 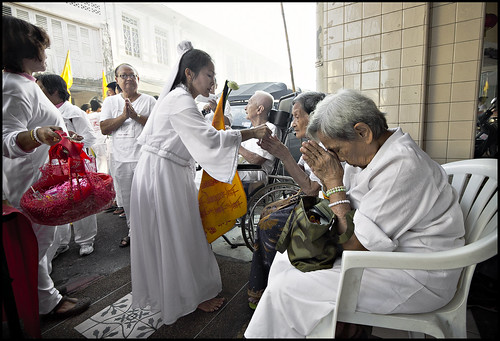 (above) A Ma Song giving blessings to some of the older members of the Bumrungwong family who run the herb shop, Kopitiam restaurant and Wilai restaurant on Thalang Road. I can only begin to imagine the changes these folks have seen in Phuket. 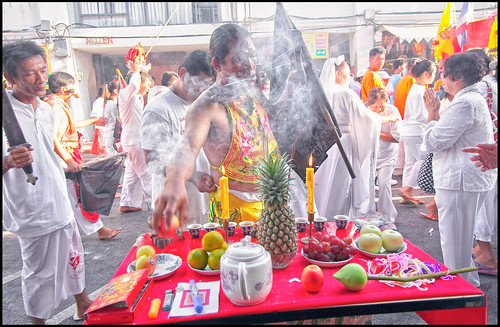 (above) Houses and businesses along the procession route each day will place shrines outside covered in fruit, cups of tea, incense, candles .. Ma Song may stop at any shrine to bless the house, and may drink some tea or take some fruit which as far as I can tell, they then give to people in the crowd. Sometimes the Ma Song go into the house or shop behind the shrine also.

This procession from Jui Tui seems to be never ending! Certainly took well over an hour for the parade of Ma Song to pass by. No way you can photograph or even see all of them, as they often pass by several at a time and it was very busy - lots of people like me happy to see the sun and taking the chance to see a procession. I can see other people's photos of the same procession, and they have photos of different faces. And there are a lot of faces to see ... 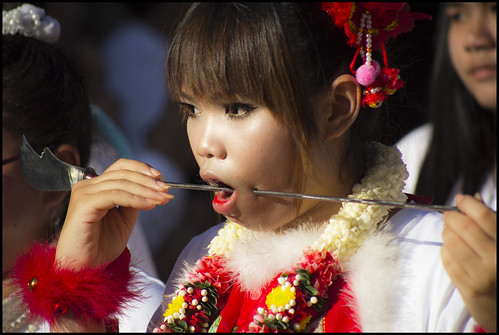 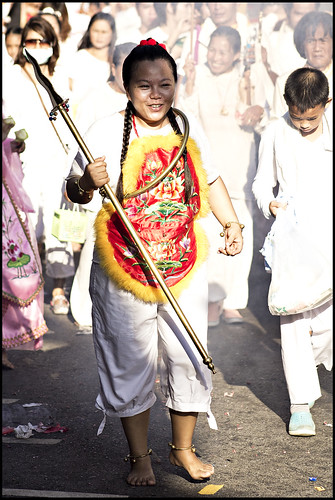 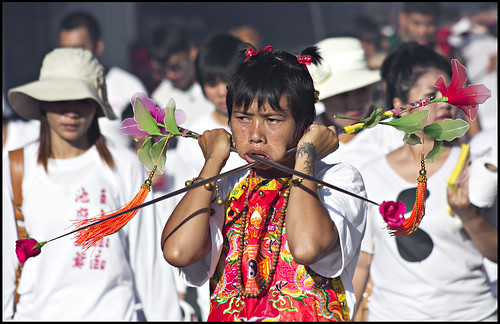 When the majority of the Ma Song have passed by, the rear of the procession is the noisy part ... groups of young men carry statues of the emperor gods through the streets and are subject to a barrage of firecrackers, either thrown on the ground, or onto the statue or held above them on a bamboo pole. This is my favourite part of the procession and I enjoy getting close up! Maybe a bit too close - I think next time a face mask and earplugs are needed, though I can say this .. If I had any slight apathy this year it was blown away by the firecrackers! 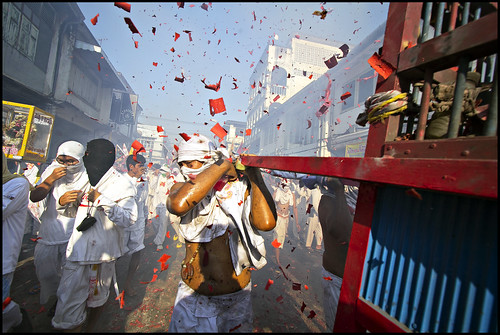 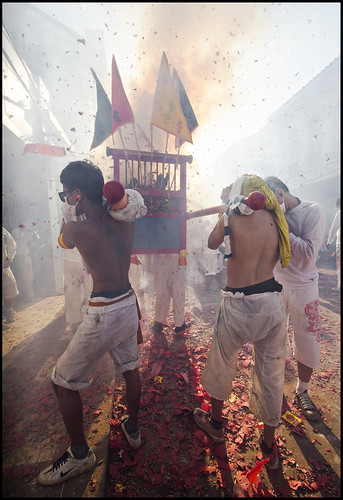 By 8:30am I was hot, sweating and covered in pieces of firecracker! Could not stay any longer, I had to dash home, shower and go open the dive shop .. and wished I had not been so lazy for the first 5 days of the festival! OK, next year I will be up for it again ... This really IS worth waking up early for. The Jui Tui procession was on October 11th, and I planned to wake up even earlier on the 12th to visit Kathu Shrine, see some face piercing taking place and watch the procession leave Kathu village ... had planned to add all that onto the same blog post, but it will follow soon in a 2nd blog post about the 2013 Phuket vegetarian festival. :)


You have been reading : The Phuket Vegetarian Festival 2013 (Part 1)