Update 26th December 2014. 10 years since the tsunami. I was thinking of writing a new blog post, but words don't mean to much. Last year we visited the tsunami memorials in Khao Lak and it certainly was a time for reflection and remembrance. Today also.

It's been a long time since I mentioned the tsunami on the blog. Seems like a very long time ago. Our son was born 2 weeks after it happened, and he's a big boy now! We do occasionally pause to think about what happened on December 26th 2004. Was certainly an emotional time for me, although we lost nothing and I personally did not know people who died. Actually, Phuket suffered a lot less than Khao Lak (or Phi Phi Island). The number of deaths in Phuket was less than 300. In the Khao Lak area along the coast, the official number was more than 4,000. This is mainly due to the topography of the land and the sea floor - very flat, so the wave could just keep going. In places, the tsunami reached over 1km inland. In other areas where the land rises away from the sea, the damage was a lot less. One of the worst hit areas was the fishing village of Baan Nam Khem which is north of the beaches, close to the larger town of Takua Pa. We've driven this way quite a few times in the last 8 years, on the way to visit places like Khao Sok National Park and the old town of Sri Takua Pa. And each time we passed through I thought about stopping at a tsunami memorial, but at the same time I really did not want to be guilty of "tsunami tourism". But on our recent holiday, since we were staying in Khao Lak, we decided to visit the memorials, pay our respects to those who died. Quite a sombre holiday activity, but after all these years, it was something I wanted to do.

We visited 2 different memorials on different days. The first was the Baan Nam Khem tsunami memorial park. Just to the west of the village, right by the beach. The park looks to be well kept. There's a small museum with lots of photos, and several small stalls selling food and drinks. The main memorial consists of 2 long walls. One is bare concrete and curved like a big wave. The opposite wall is covered in name plaques, some with photos, some with fresh flowers. A long wall full of people who are gone but not forgotten. 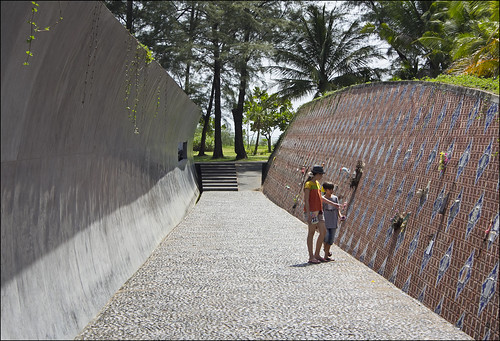 I let the kids walk at their own pace, reading names. They know about the tsunami of course, but visiting this memorial at Baan Nam Khem made them stop and think. We stopped by one plaque showing a photo of a young European boy, age 10. Seeing a face and knowing his age really hit home with the kids. "Did he die?" my son asked. He knows that he was born just after the tsunami, but it's hard to grasp what "it" really is. He watches videos on YouTube showing the tsunami. I've told them how lucky we are. We were all at Kamala beach on Christmas Day 2004. Next day Kamala was hit hard. 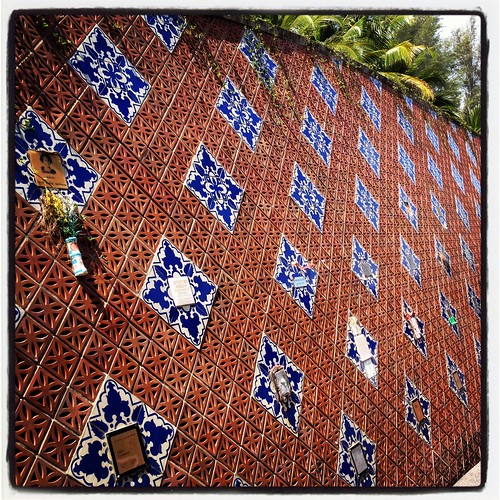 Another who died that day in Khao Lak was a young man called Bhumi Jensen. The tsunami affected a great many families who lost loved ones, and even the Thai royal family was not spared. Bhumi was the son of Princess Ubolratana, the eldest daughter of King Bhumibol. There is a small shrine to him at the memorial park, and also a large Buddha statue right by the sea. 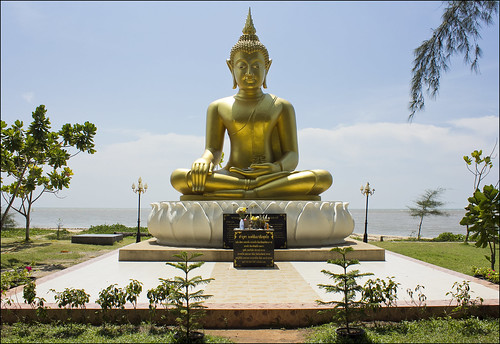 A few days later, and only a short drive from our hotel, we visited another Khao Lak tsunami memorial site, one of the symbols of the tsunami, demonstrating just how powerful nature can be. Police patrol boat number 813 was anchored offshore from La Flora resort, on royal protection duty looking after Princess Ubolratana and her family. The force of the tsunami was very strong at this point. The hotel was heavily damaged, many people lost their lives and the 80 foot long police boat was carried over 1km inland by the tsunami. Nobody ever moved the boat. It was decided to leave it as a memorial, although over the years the site had started to get developed. Shophouses line the main road nearby. In 2012 work started on creating a memorial park around the boat with a museum. Work is still in progress. 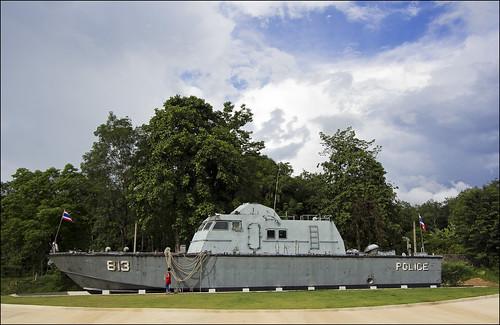 As you can see, it's a big piece of metal. And (I just checked on Google Earth) it's 1.2km from the sea. When the museum is complete, I imagine we'll visit again. We liked our days in Khao Lak, very relaxing and the hotel prices in low season are very low (see Khao Lak Hotels), although Khao Lak in low season gets more rain than Phuket and if the wind blows strongly, the waves just about cover the whole beach. 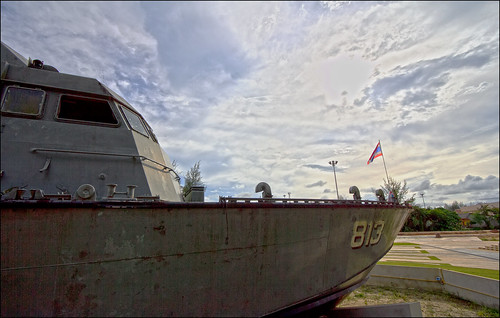 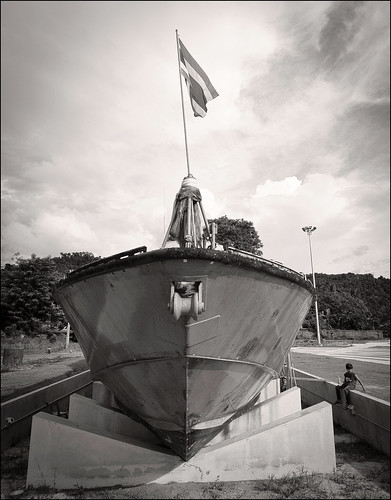 For the moment, it's just the boat, a completed but empty building, a wide open park area and a museum under construction very slowly - just a few Burmese construction workers on the job. I imagine they know that quite a lot of Burmese died in the tsunami too - not in Burma, but in the Baan Nam Khem and Khao Lak area - many Burmese work on fishing boats or do building in Thailand.

I think the whole family was glad to visit these memorials. Kids learned something, we got to pay our respects or say a prayer in our own way. Everyone living in this area had their life shaken up by the tsunami, and especially here everyone hopes it will not happen again although, if it did, the loss of life would be a lot less. People know what to do now, and with warning systems in place, such a disaster just could not have the same effect again. Certainly I have no worries about being on the beach, what happened on December 26th 2004 was absolutely a freak of nature. Not to be forgotten, but not to be feared either.

Places to visit near Khao Lak


You have been reading : Khao Lak Tsunami Memorials