On some weekends we don't do much, just odd jobs, homework (kids), have a lunch out maybe, take it very easy. Sometimes a long sleep in is very much appreciated. But even with a late wake up call, there are plenty of hours in the day for doing something more interesting. My wife and I like to just "go for a drive" sometimes, maybe with a vague destination in mind, or maybe we just follow our noses. The kids will be like "Do we have to? Can't we stay home and rest and play video games?" But very often these random drives end up being plenty of fun and I like to think that the kids also like the idea of exploring new roads. They might just end up going backpacking for years like I did :) Well, on a recent day off, we were not up too early, had noodles for breakfast about 11am and then thought "What now?" I had been looking at a part of Phang Nga province for some time on the map, a large area about half the size of Phuket that we had not explored at all. Phang Nga is the province just over the bridge from Phuket and we have done a lot of drives around this area in the past. The area I wanted to explore is just over the bridge to the east, a big bulge sticking out with the main road to Phang Nga Town looping around it. On the map it looked very quiet and I was not sure if the roads were that good, but we have a pick up truck which can handle a few rough roads!

The area is part of Takua Thung district and during the afternoon we passed through 3 different sub-districts (Tambon) - Lo Yung, Klong Kian and Tha Yu. We had 3G coverage almost all the way and had Google Maps on the phone to check directions. Proper exploring :) We took a right turn just a couple of km after the Sarasin bridge, and off onto new roads. Started off as a good road, then hit a few km of road building with many large trucks coming the other way, but it soon settled down into lovely green scenery. 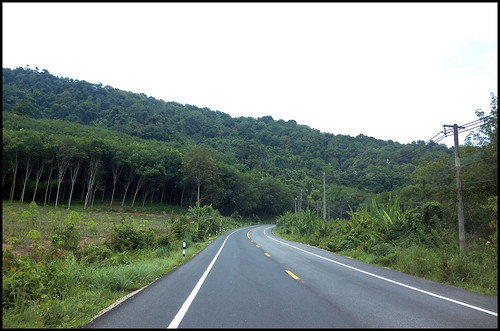 The roads were actually very good all around the area except when we deliberately hit some dirt later. Lots of rubber plantations and lots of pineapples growing around here.

(above) Pineapple fields. A lot of Phang Nga (and northern Phuket) is rural / agricultural.

Our first stop ... My wife was driving and I was navigating using Google Maps. I wanted to find somewhere with a view back over the water to Phuket. We skirted one larger fishing village and ended up passing a smaller one, which was rather dirty and stinky with the road ending in dirt next to a small jetty and a view of Phuket island about 3km away. 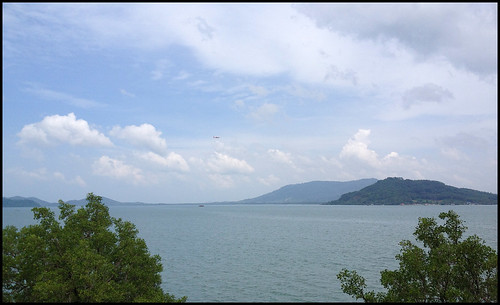 (above) Looking over to Phuket. We could see planes coming in to land. The nearest part of Phuket is called Laem Sai, an area we explored a couple of years ago on another little drive :) 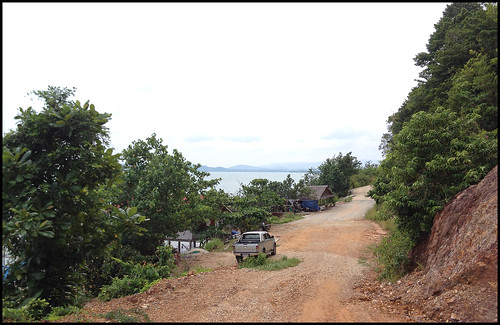 (above) Our first stop, on a Phang Nga back road. Nice views, guaranteed no tourists!

Onward! I could see that the village of Klong Kian had a sizeable jetty, and looked to be the largest community in the area. Took about 20 minutes to drive there from our first stop. Just before the village, the road climbed up to around 75m above sea level with a great view ... 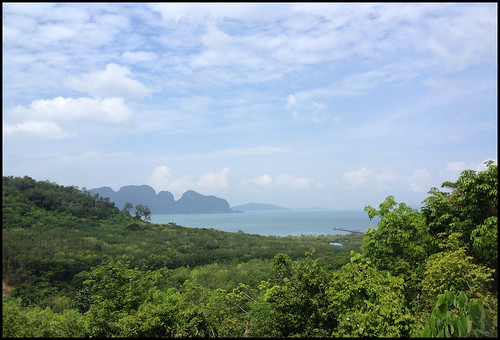 Down the hill to reach the jetty that can be seen in the photo above. And it's a fairly big one, about 400 meters long. I am guessing some Phang Nga Bay boat tours use this pier, so maybe it's busy in high season. We saw a restaurant (open, but empty) and a large car park (with 1 bus parked). Lazy family decided to drive down to the end of the jetty rather than getting exercise. At the far end was space to park a few vehicles. One minibus was waiting there. We enjoyed the quiet and the seaviews. 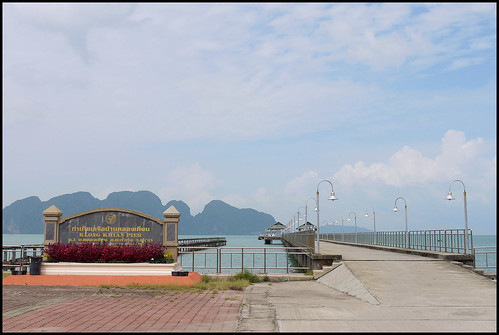 (above) Looking down Klong Kian jetty 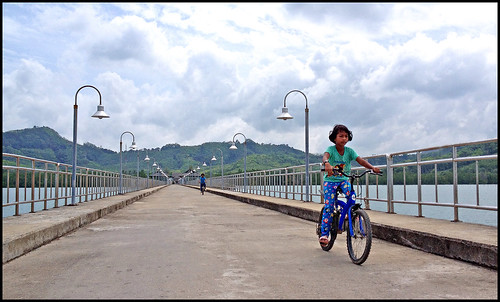 A mangrove canal enters the sea next to the jetty and there are many longtail boats moored up the canal. The Thai word for canal is "Klong" (คลอง) and this area of Phang Nga has many mangrove canals. Much of the northeast coast of Phuket is also mangroves. 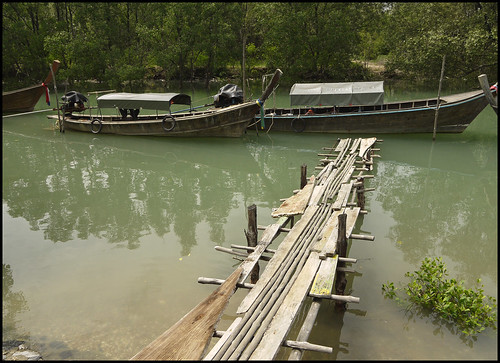 (above) Up the klong at Klong Kian. The little walkways to the boats are made from scraps of wood.

We moved on from Klong Kian. I was worried we'd have to drive back the way we came, but the road carried on north and from consulting the map, looked like we could get back to the main road at the village of Tha Yu. Again we had no particular plan, just drive and see what we could see ... And we found a little gem! About 7km north of Klong Kian, I could see a fishing village on a mangrove canal that looked big enough to be of interest and maybe with some views. I can't see the name of the village, but it's marked on the map on this page. We drove to the end of the village and found a long wooden floating jetty with many longtails tied up. Looking on the map, it might be possible to take a boat from here out into the bay .. something we might try on our next Phang Nga Bay trip! 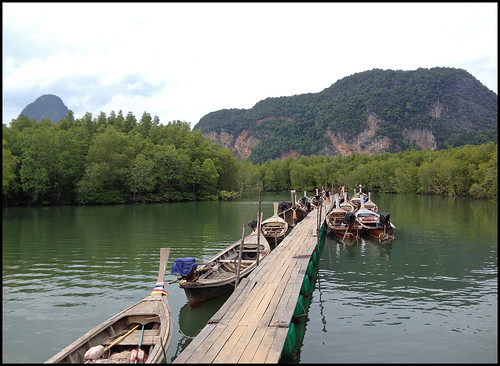 Not a bad view, but rather restrictive, being up a klong. A local guy told us that we'd find a better view along a dirt track leading closer to the open sea. The track looked to have been built IN the canal with stones and mud. But it was mostly dry and he said we could drive it, about another 500 meters ... just one worrying muddy patch (we don't have 4WD) leading to a patch of land where building work was going on including a community center. 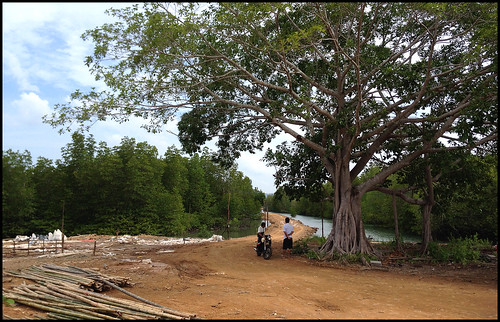 We drove along the dirt track above to find the beautiful views below ... 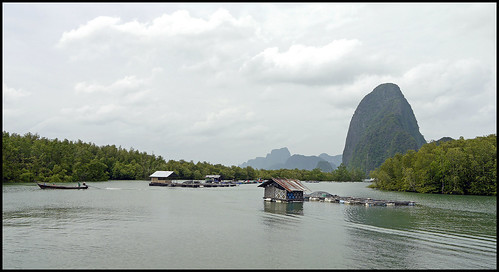 Worth the trip! I knew there must be some views like this and I want to explore this area further, although there are few roads in the mangroves and at some point, to see the best of Phang Nga Bay, you have to take a boat. Maybe not too many people plan on taking trips like this, just exploring. I prefer this to visiting well known attractions, although of course there are plenty of tourist attractions worth visiting. An afternoon like this on the back roads is what my wife and I enjoy sometimes, and glad to say the kids enjoyed this afternoon too.