The end of January 2012 was a busy time for festivals and fairs in Phuket! We had the Chalong Temple Fair, also a food fair at Sapan Hin (the south end of Phuket Town), it was Chinese New Year on the 23rd (welcome to the year of the Dragon!) AND from 28th - 30th January there was the Phuket Old Town Festival, 3 nights of street fair, food stalls, stage performances in the old part of Phuket Town along Thalang Road and in the Queen Sirikit Park next to the TAT office. There had been a one-night fair for the Chinese New Year on the 23rd at the Sanam Chai park on the north side of Phuket Town. We went along and I took some photos - see Chinese New Year in Phuket but much of the New Year celebrations were saved for the Old Town Festival although there were lots of lanterns on the 23rd.... 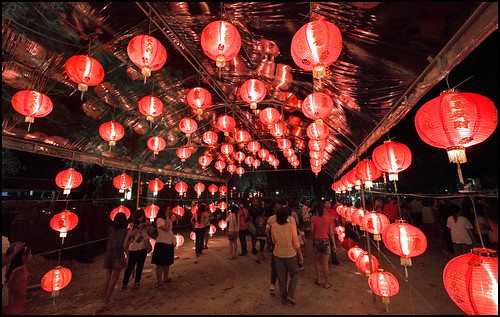 We headed into town on Saturday 28th and Sunday 29th in the evening. A bit late on Saturday actually as there was a street procession with people dressed up in old style Chinese clothing .. and we missed that. Oops! But there were plenty of people dressed up along Thalang Road. Phuket has large Chinese influence, with a lot of Chinese-Thai people due to immigration during the 19th century when Phuket had a big tin-mining boom. 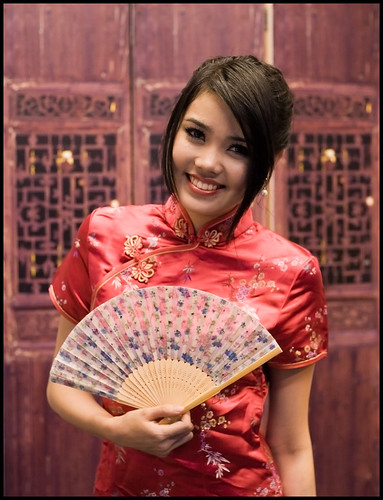 But there's not exactly a "China Town" in Phuket. Thalang Road is very mixed, there are Muslim shops, old Chinese hardware stores and printers, the old herb shop and a Chinese shrine which is right next door to the Christian Assembly! 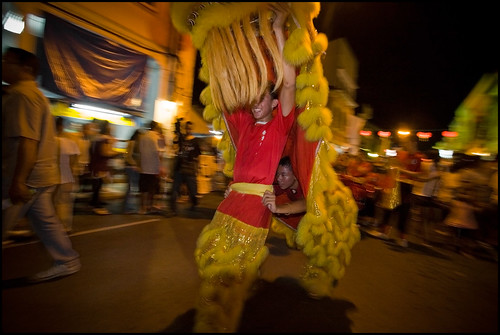 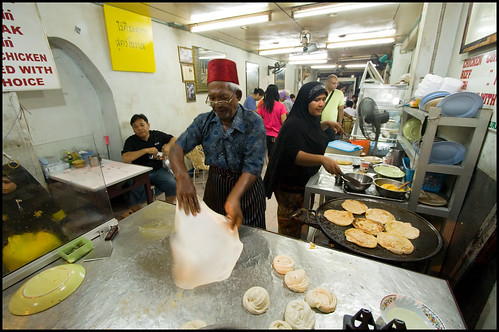 (above) Thalang Road - Dragons and Abduls Muslim roti shop - he was busy during the festival! I stopped there to get one for my son who was feeling peckish. A little girl at the roti shop thought he was handsome (well, sure, he's my son). He thought she was a bit scary, though. What a sweetie! 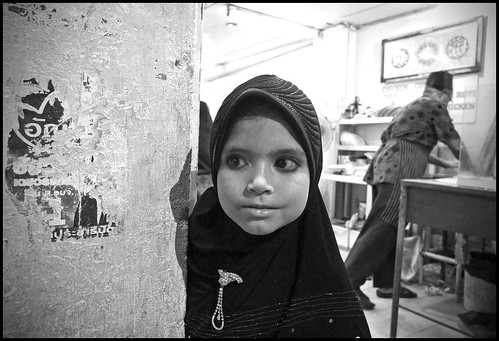 Before being invaded by motor vehicles, the main artery into Phuket Town was a canal, called the Bang Yai canal. It starts at the ocean at Sapan Hin, right in the south of the town and heads right through the center. Still there, but does not get used now aside from small fishing boats that moor up at Sapan Hin. On a small stretch of canal next to the Sirikit Park free boat rides were being offered. Well, why not try? We had to clamber down a wooden platform into a small wooden craft powered and steered by 2 offset narrow oars fixed to the side of the boat. I went with the kids for a "new experience" :) The canal is ... how to say ... smelly. The boatman looked like he might have been rowing these boats a few years ago! When he pushed the oar forward I had to lean back to avoid a punch on the nose :) 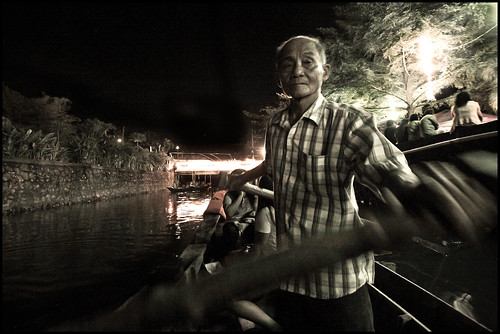 At the Queen Sirikit Park, there was a lot going on. There is a big dragon statue at the park. Old Chinese legend says that Phuket is a sea dragon called Hai Leng Ong emerging from the ocean. The dragon protects Phuket. And this is the year of the dragon, so it's doubly important for Phuket. The local Chinese-Thai community believe strongly in some of the old ways - and you can see this not just at Chinese New Year, but also for example at the Phuket Vegetarian Festival and the Hungry Ghost Festival. 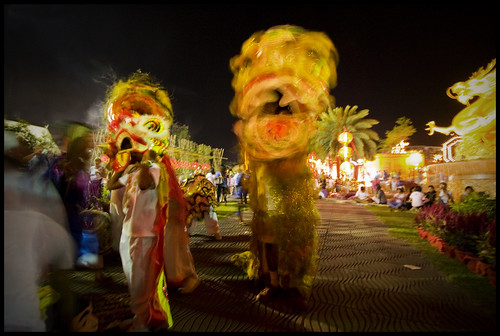 (above) Dragon dancers next to the dragon statue at Queen Sirikit Park.

A stage was set up in the park, though we couldn't get near it .. lots of people there watching dancing and music which went on each of the 3 evenings. Another area was more commercial with an outdoor motorbike showroom. Kids enjoyed sitting on the bikes (not until you're 18, son) and posing with the Pretties - the name given to the (admittedly) pretty girls who are there selling bikes (and cars, or beer). 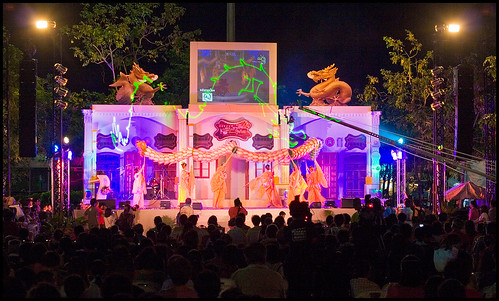 (above) Stage with dragon dance at the old Phuket festival 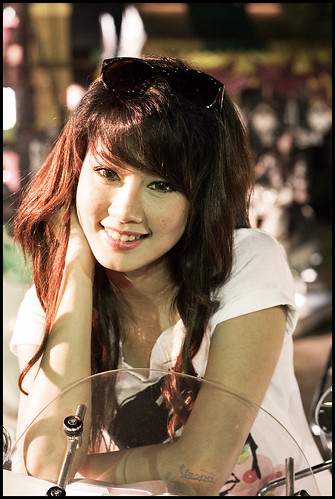 (above) One of the "pretties" selling mopeds 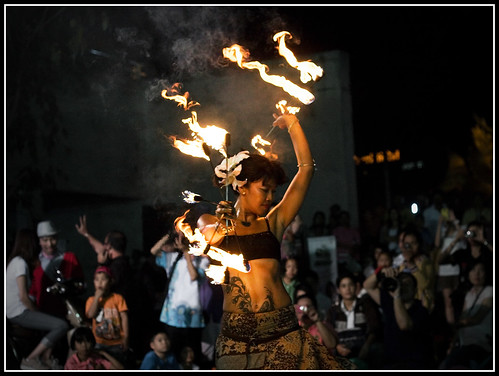 (above) Fire dancer in the Queen Sirikit Park

Back along Thalang Road we spent some time on the Saturday evening at the Glastnost Cafe on Soi Romanee, a narrow side street that heads off Thalang Road and joins up with Dibuk Road. Romanee has several small cafes and guesthouses. The Glastnost is owned by a jazz loving lawyer called Mr Puchong. He had a friend in the house, who owns the Phuket Beer company. So... we had a few Phuket Beers while the kids entertained with music. 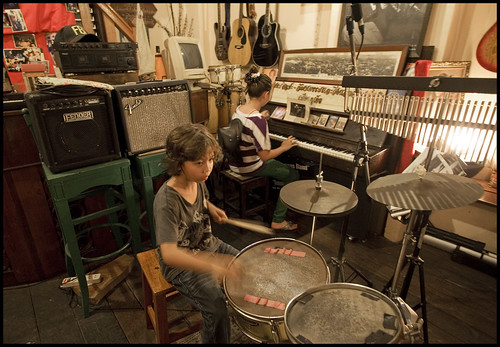 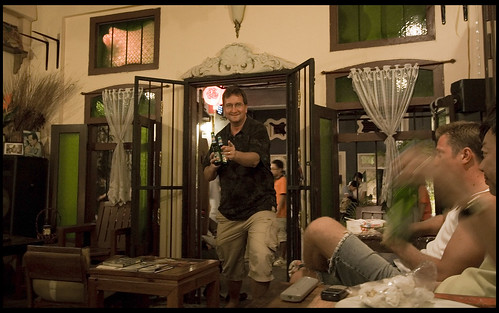 Soi Romanee is not a wide street and was made narrower still by stalls selling clothes, drinks, arty things.. The old town is a place I always like, but it looks especially good at festival time. Good to see quite a lot of tourists in town during the festival too. I keep using the term "the real Phuket", which is hard to define, since Phuket has many sides, but in the old section of Phuket Town there is a lot of interest. I'm not going to knock someone for spending 2 weeks on the beach, but I've been doing this blog for years now, trying to show that Phuket is so much more than beaches. I guess the "real Phuket" is what you make of it. 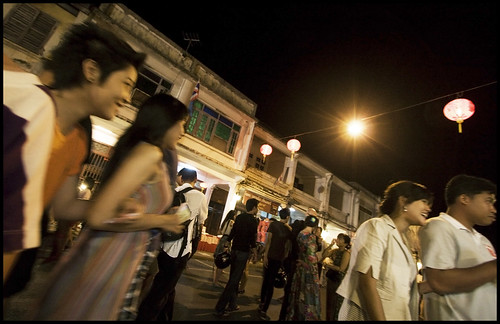 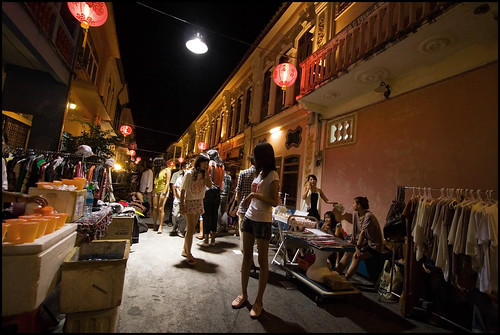 (above) People walking on Thalang Road and the narrow Soi Romanee


You have been reading : Phuket Old Town Festival 2012