I know the blog is called "Jamie's Phuket" but the blog is not always limited to only things in Phuket province / on Phuket island. A day trip exploring in Phang Nga is easy enough. Phang Nga province is where you find yourself on the north side of the Sarasin Bridge. And we like Phang Nga, you can find a lot to do here, such as exploring Phang Nga Bay, including James Bond Island and Koh Panyee. A couple of weeks ago, we headed north towards Phang Nga Town. I had never ever stopped in Phang Nga Town because normally we drive towards Krabi and the east coast, and the junction where you turn off is just before the town. I wanted to drive through town and visit Wat Thamtapan, which I'd seen on Cathy and Gary's website (see here). The town is quite small, I was hoping for something like an "old town", but there was not so much to see. We stopped at Phung Chang Cave which was interesting, and then on to Wat Thamtapan, which was easy enough to find on a side street called Soi Thamtapan. This temple is a little different ... 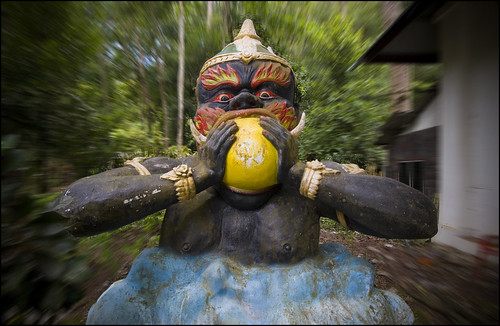 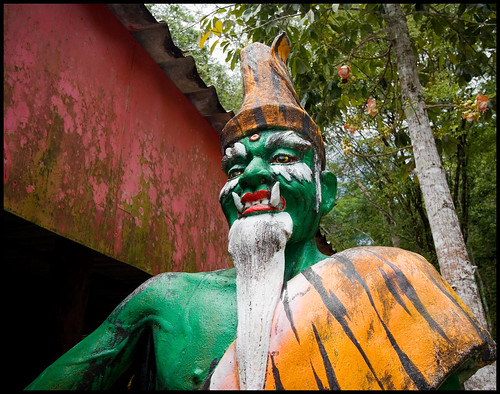 I'm sure there's a Buddha somewhere, but the temple grounds are full of bizarre statues. And this is just the start. Hard to know where to look. We knew that there was a "hell" section to the temple, but first we saw a stairway leading up into the jungle, so we followed that, passing a statue of Lakshmi on a crocodile on the way. Well, why not? 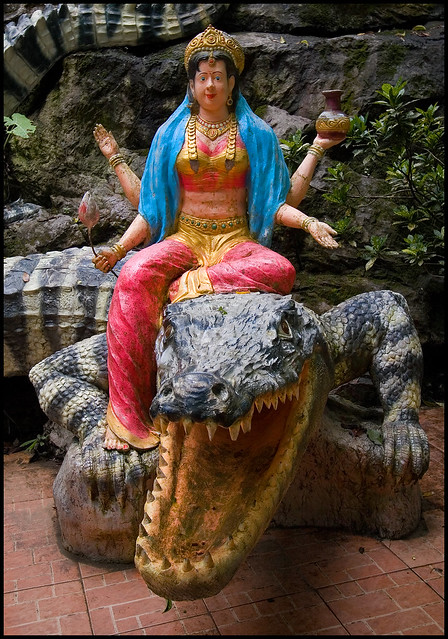 And then we climbed up, and up, and up. A rather steep stairway, I nearly stepped on a snake. We had no idea where the stairs would lead! Well, it must have been built for something. Through the trees we climbed, until we reached a shrine with a great view across the town of Phang Nga. 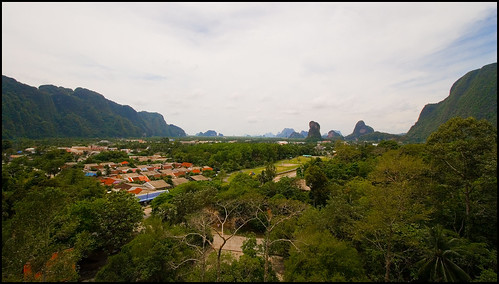 Heading back down .. it really was steep! 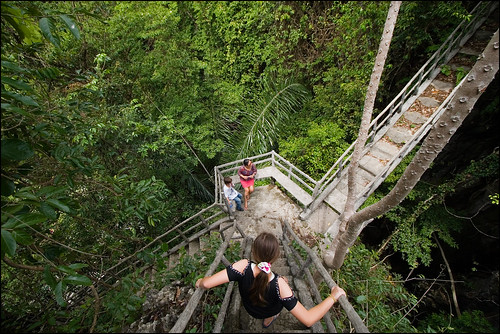 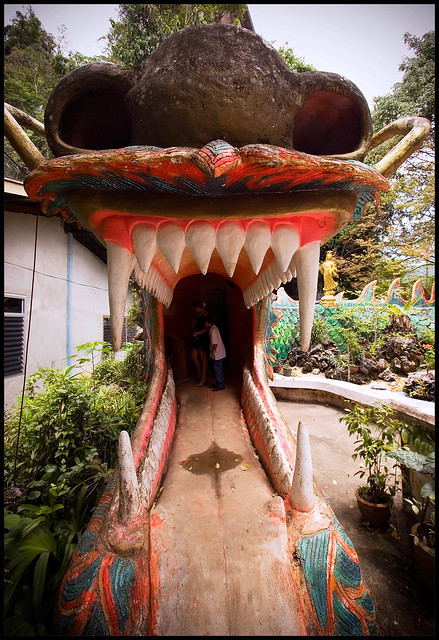 As you exit from the dragon, statues show people seemingly praying to be spared the punishment. The Buddhist "hell" is called "Narok" in Thai. My kids cottoned on to the meaning pretty fast when we saw some of the statues. They decided quite fast that they should "Be good, for goodness sake". Or end up like these poor folks. 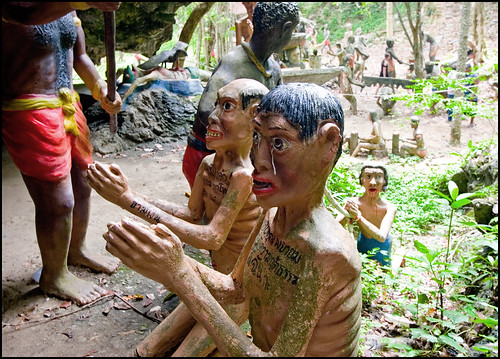 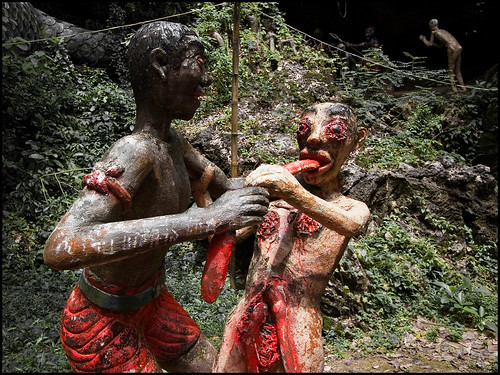 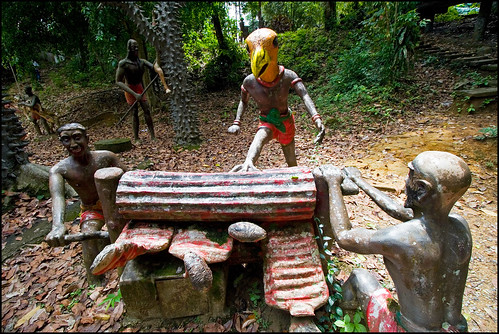 Not really something for kids, but, hey, call me a modern parent! Our daughter (age 10) was interested. Our son (age 7) was traumatised a bit worried. So, be good!

There is also a pretty big cave here, near the hell statues. It reaches back about 100m into the rock, and there is a path. Will investigate further next time, but it's the biggest cave I have seen in the area. 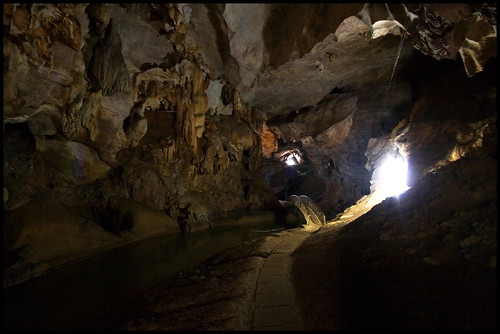 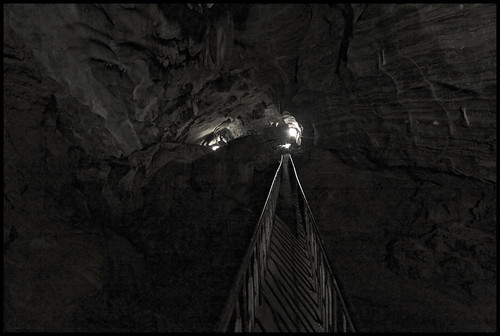 This really is a different kind of temple. Glad to have found it. If you have young kids, the visions of hell might not be such a good idea, and although I object to the use of religion as a form of control. My kids picked up the vibe pretty fast! Well, they are good anyway. One of these days, I have to write a blog post about things to do with kids, but look... I started this blog in 2006 when our daughter was 4, our son was 2. Almost everything here involves them. The whole blog is "Phuket for kids"! And look, there was a Buddha in Wat Thamtapan... 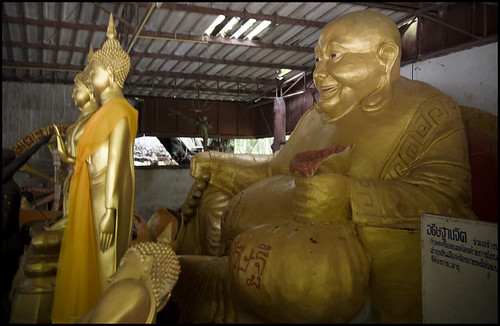 After this temple, we checked out a waterfall "forest park" called Sa Nang Manora, a few km north of Phang Nga Town. There are lots of waterfalls and caves in this area. Phang Nga is sparsely populated and very green. And there is more we want to see in the area. If you rent a car, Phang Nga town is only about 1 ½ - 2 hour drive from Phuket (depends where you start in Phuket!). Explore!


You have been reading : Wat Thamtapan, Phang Nga