Note : this post was from 2006. We always do something for Loy Krathong and I have blogged several times about the festival ..

Loy Krathong is one of Thailand's more famous celebrations, a festival with ancient roots which (for me) boils down to saying thanks for the water and letting your bad luck drift away. It's not a huge celebration here in Phuket, but nevertheless just about everyone does it - I mean everyone makes or buys a "kratong" and sets it adrift on a body of water somewhere. And there are some parties going on and fancy dress competitions and so on.

We just headed for Bang Wad Reservoir, Phuket's largest water supply. A LOT of people go there. Its located in Kathu district. To get there you drive into the Phuket Country Club.

The event there was better organised this year - in 2005 it was a bit of a scrum to find parking spaces. This year the police and local officials made sure people did not drive right up to the reservoir. It did mean a 5 minute walk up the road to the dam, but we are just about able to manage a walk of this distance! My daughter carried our Kratong : 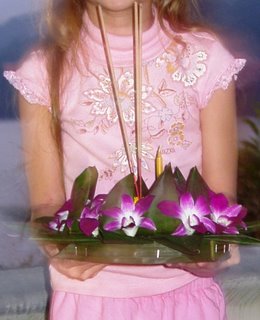 We set it adrift on the reservoir. In the Kratong we put some coins and snips of hair from each of us. The wind was light but blew out most people's candles. Ours managed to stay alight as we watched the kratong drift away: 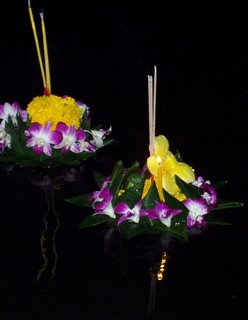 At the reservoir were plenty of people making and selling Kratongs and also a competition for the biggest and fanciest kratong (made by local schools etc..): 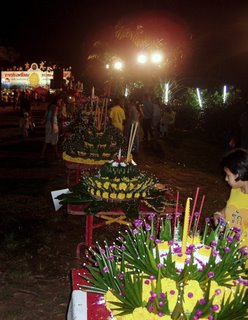 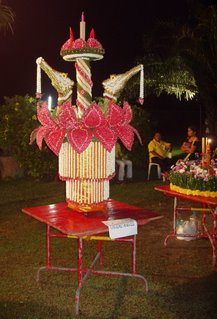 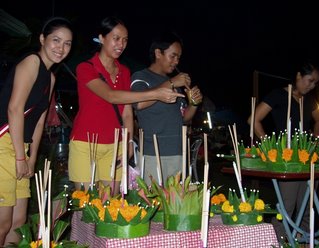 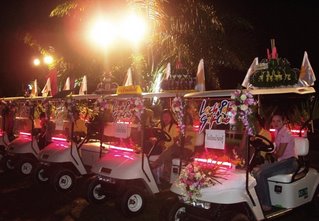 We decided also to let a paper lantern float up for us. These lanterns are not so common in Phuket compared to Chiang Mai, but I saw more this year than last year. Come to think of it I don't recall seeing any at the reservoir last year. Being rather keeniow (Thai word for tight arse) we opted for a cheaper plastic lantern for 50 Baht (it was 100 for the paper ones). Ours nearly burned up before floating away into the sky and, with a breeze picking up, soon disappeared from sight. 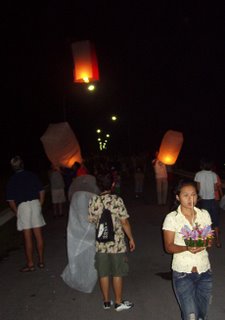 We had thought to head down to Chalong Bay too, maybe eat by the sea as we did last year, but we could see rain was on the way. So, another Loy Krathong over, hopefully any bad luck has been cast adrift and we can look forward to another happy year!