Many visitors to Phuket probably don't realise that over a quarter of Phuket's population is Muslim. I think there is an assumption that everyone is Buddhist, so I can imagine tourists being surprised by the large number of mosques dotted around the island - you'll pass several between the airport and the southern beaches. There are some huge mosques, the largest being at Cherng Talay, near Bang Tao and Surin Beaches. You can read more on the blog - see Mosques in Phuket. Officially, Thailand is a Buddhist country, but many parts of the south have large Muslim populations. There has been violence for many years in the 3 provinces bordering Malaysia, but in Phuket I am happy to say that everyone lives together happily regardless of religion. I have a favourite street in old Phuket Town where you can find a Chinese shrine, a mosque and a Catholic church more or less right next to each other. A couple of our favourite restaurants are Muslim owned, serve no pork dishes and one of them has a big sign outside saying "no alcohol". One also assumes the food is halal.

Halal food is that which is permitted by Islamic law, and in particular with regards to meat, the animals must have been killed in the correct way. In a broader sense the word Halal also extends to permissible behaviour, clothing and manners. Not something that non Muslims normally think about... and if you do think about it, you might wonder if Halal food is permitted for non Muslims, or if it might be a bit "strange"... The Phuket Halal Expo was the place to find out. 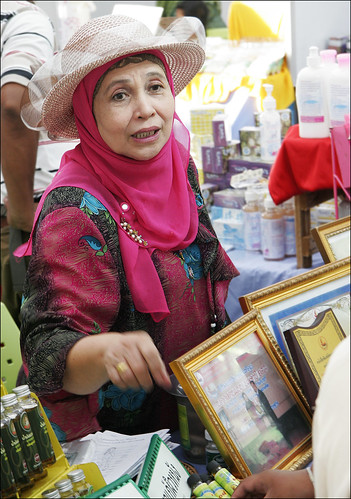 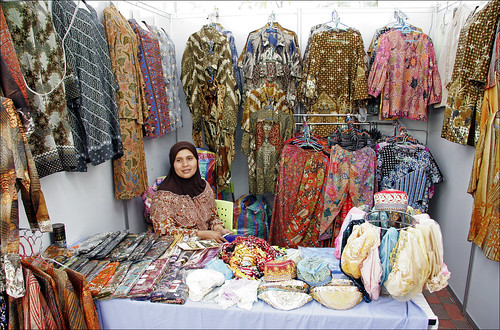 The Halal Expo 2009 ran from April 30th - May 3rd at Sapan Hin, a large public recreation area in the south of Phuket town where festivals and concerts are often held. There was also a Halal conference at the Hilton resort at Karon Beach. The idea is to make Phuket a regional hub for Halal food and business. We went to Sapan Hin on May 2nd to look around all the stalls selling arts and crafts, food, drinks, clothing and more. Live music was planned for later in the evening, though we mainly went to sample the food!

Walking around with my daughter, she spied some lovely little decorative fish.. Check the photo below - believe it or not, made from a plastic drinking yoghurt pot. Not sure what it had to do with Halal, except it was a Muslim lady making the fish! 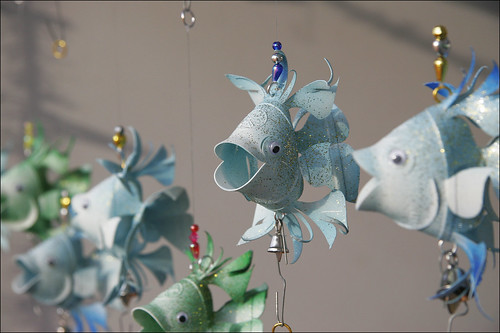 We then stopped at a stall selling pineapple biscuits, made in Malaysia - of course Thailand's neighbour is a largely Muslim country and there were several stalls here from Malaysia. There are close ties with Phuket and we get a lot of Malaysian tourists here. So, to help trade between Phuket and Malaysia we bought some biscuits :) 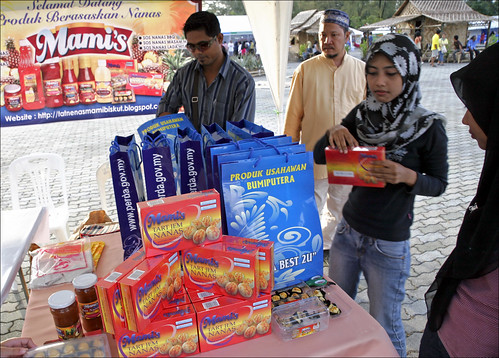 Around some of the stalls were old style traditional woven huts, I suppose some kind of "how we used to live" display. 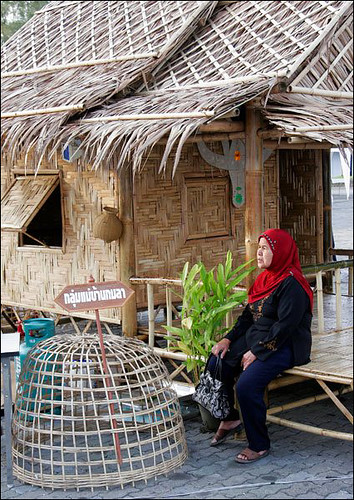 After a look around the stalls, we headed to the tastier section of the exhibition - the food! There must have been a hundred different food stalls and there was plenty of open air seating and lots of people. I found the stallholders very friendly, happy to have a camera pointed their way. This guy is selling Pa Tong Ko, one of my favourite snacks... 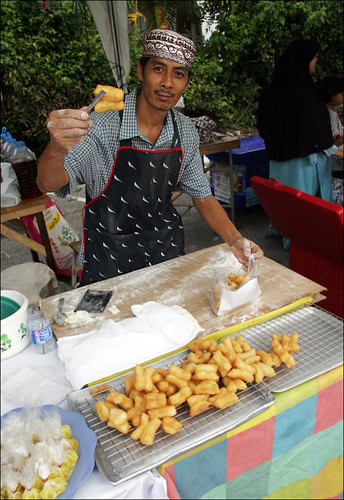 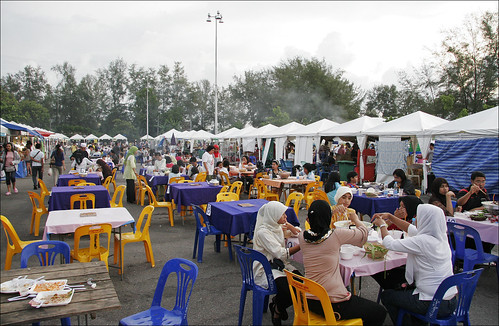 And this little girl, being told to smile by her mum. They are selling Phad Thai... 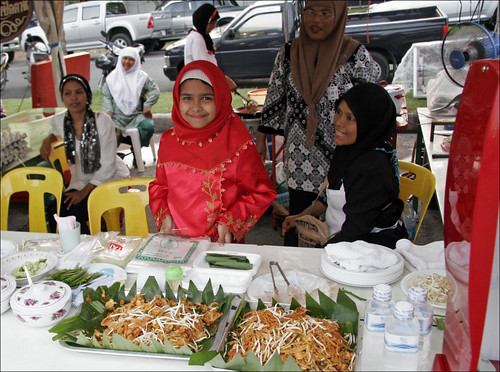 And here's some delicious grilled chicken.. seriously you can't consider a KFC compared to this! 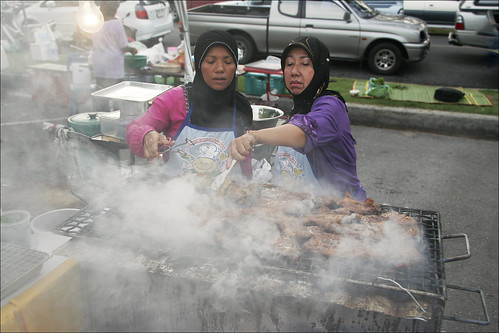 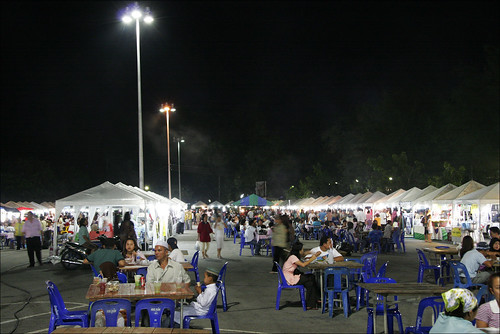 I was very happy snacking away - an event like this is simply the best way to sample local food. We sat down for quite a while as it got dark and munched through chicken, fresh spring rolls, noodles.. no need for a big dinner after all that. The event had a very happy atmosphere, a great advert for Phuket's Muslim community. Smiles everywhere... 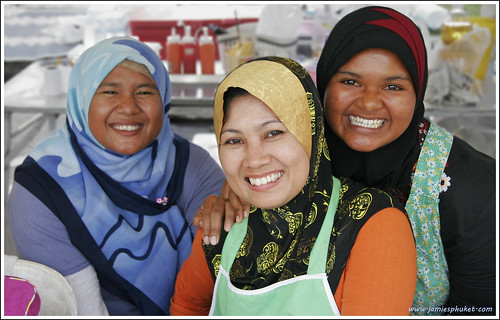 Now, after all that food... need a drink. No beer obviously... How about some ice cold Mecca Cola? Yes, you heard it. Mecca Cola is being made in Phuket. I have not seen it in any big stores yet, they are just starting with the marketing, so I was told. Anyway, I can vouch for it - dare I say better than Coca Cola? 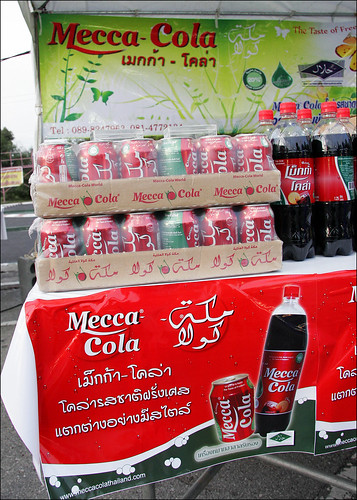 On the way out I was offered sampled of a halal soya milk. Another very friendly guy, and check out his cool dude kid in the shades. Soya milk is very common in Thailand, I often drink some in the morning. 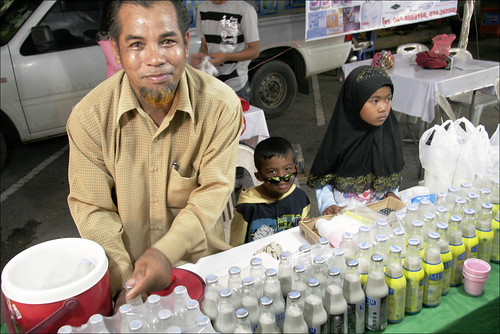 Another guy was making fresh tea, throw the leaves in a strainer, pour through hot water, add milk, bingo. He was quite a character. I normally don't impose too much on people and take portraits, but I like this picture. And the tea was good too. 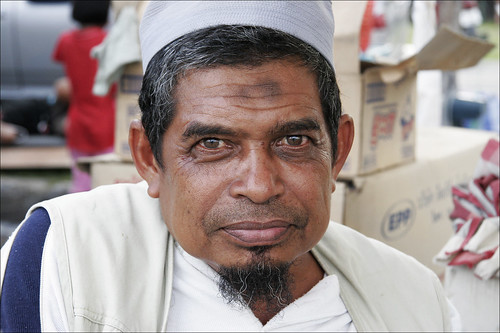 There is in fact another Halal festival in Phuket called "Halal Food, Hilal Town" which is normally in July - I don't see confirmed dates for this year yet. These kinds of events really show local colour and if you like to discover local food, "mingle with the people" and find the real Phuket, you have to get off the beach and look out for little festivals like this.


You have been reading : Phuket Halal Expo