Now here's an interesting local place that I have meant to write about for ages. Phuket Town is the place to look for local life, history and culture, though much of Phuket Town was only built after 1900 and then thrived on the tin and rubber booms. Before that, Phuket was more rural, and the main town was Thalang in the center of the island. Way back in 1785, the people of Thalang battled against a Burmese invasion (more info see : The Heroines of Phuket). These days, Phuket Town (officially called Phuket City though everyone says Phuket Town) is the center of government and business. The old center of town still features a lot of old buildings, and businesses that have been in the same family for generations. There's a lot of content on the blog about Phuket Town. If we go out in the evening, we go to town, not to the tourist beaches. We have several favourite restaurants in town and I just enjoy a walk sometimes around the older streets. And there always seems to be something new to find. I was amazed a few years ago to find the Shrine of the Serene Light hidden up a tiny alleyway and connected via a passage to the back of the Wilai restaurant on Thalang Road. The entrance to that shrine on Phang Nga Road is currently being widened and tarted up. Opposite there is the north end of Amulet Alley (see map at the end of the page). 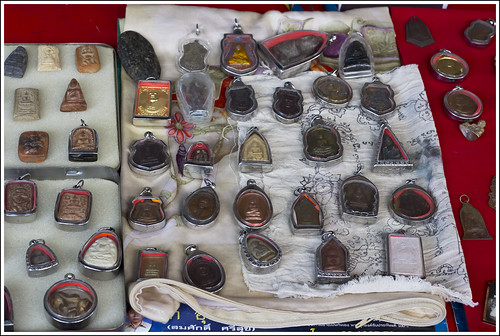 I've used Amulet Alley (sounds like something out of Harry Potter) as a shortcut from Phang Nga Road to Rassada Road often enough. You might not notice this alleyway, but if walking in town, always worth exploring the side streets! So what's in Amulet Alley? Yes, people selling Buddhist amulets - which are like lucky charms. I'm not an expert though I wear one myself that we got from a temple near Chumphon (my wife's home town) .. got one in the car too that's meant to be for safe journeys.

You can buy simple amulets in temples for 100 Baht or less. In fact the one around my neck was given to me free by a Buddhist Nun. She gave us each one (myself, my wife, daughter and son). But these are not the ones for sale in the market at Amulet Alley. Well, I guess we can call in a market, or maybe just a street for amulet collectors and devotees. Rare amulets can sell for 1 million Baht. There are shops and markets selling amulets all over Thailand including a huge market in Bangkok. There's even an amulet collectors magazine. 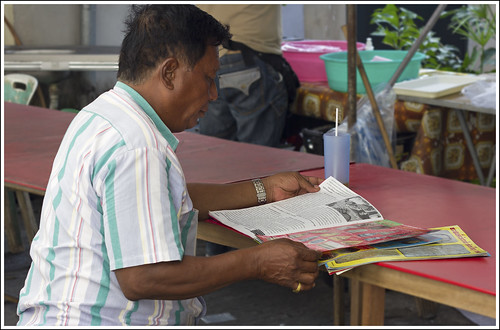 You'd have to be a real collector to know a rare amulet from a reproduction, but trade I think must be good. Look around, you see many people here wearing amulets, and the reasons for wearing one are varied. Not just for general "good luck" but an amulet can be for love, for good luck with school or work, for protection from illness, and of course it helps if you believe. 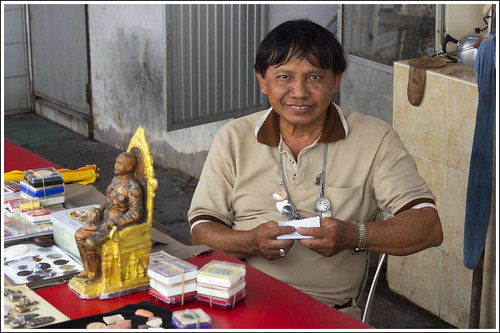 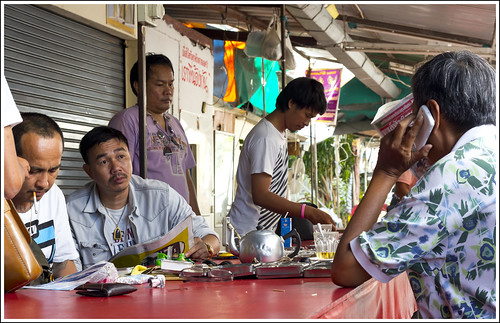 (above) These guys looks like they're serious amulet dealers, while I was there, they were always on the phone and I imagined them discussing the latest amulet prices. I'm not sure of the business hours of this street, sometimes there are more amulets for sale than others, it seems to be quite informal. Not really a market, more a gathering place for amulet enthusiasts. 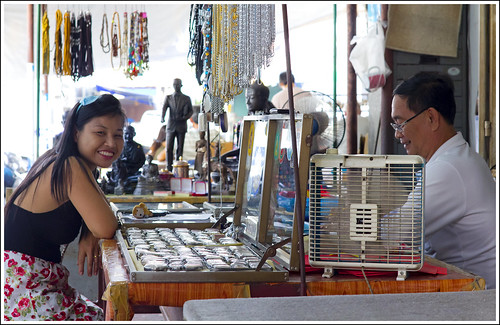 
You have been reading : Amulet Alley in Phuket Town