Phuket Town is where you'll find much of Phuket's history, and I like to spend time walking in the older parts of town, somehow always finding something new to photograph. I had meant for a long time to write about a couple of historic hotels in the town. There's the On On Hotel (on Phang Nga Road), which is currently (summer 2012) being renovated - I actually stayed 1 night in that hotel back in 1999 and I'd say the renovations are well overdue - the hotel opened in 1929 and think my bed was 70 years old! On the next road (Rassada Road) is another piece of Phuket's past - the Thavorn Hotel. Not as old as On On, but maybe marks a turning point in the story of Phuket. The Thavorn Hotel opened in 1961 and was Phuket's first 5 star hotel. The faded 1960's architecture does not look too thrilling now, but I guess for a small town like Phuket it was quite fancy 50 years ago. 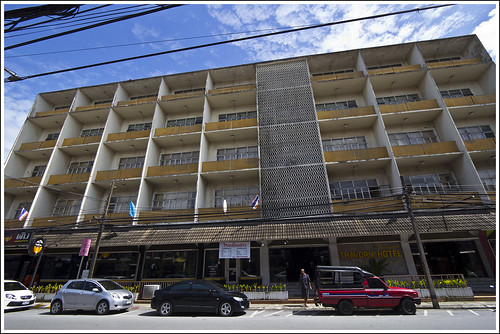 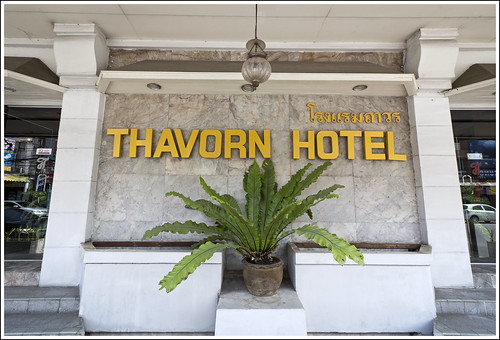 The Thavornwongwongse family who own this hotel are a Phuket Chinese-Thai family who, like many others, made money from the tin mining boom in the 19th and 20th centuries. I have a feeling they keep the Thavorn Hotel for sentimental value more than anything else, it can't be making much money with rooms being promoted for as little as 600 Baht per night. The Thavorn group owns 2 large resorts in Phuket - there's the Thavorn Palm Beach Resort at Karon Beach, and the Thavorn Beach Village at Nakalay Beach, just north of Patong.

The old Thavorn Hotel is kind of a living museum. Just walk in the front entrance and you are in a scene from a movie with a wide lobby, wood paneled walls, a wide staircase leading to the second floor and a long wooden reception desk. You can read more on the Thavorn hotel website. 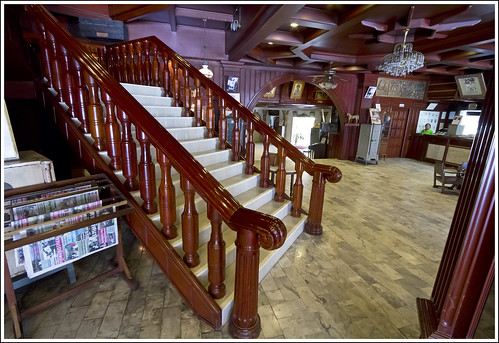 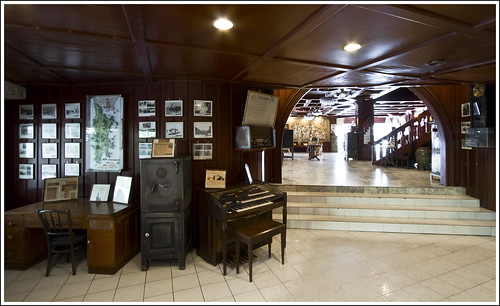 Apparently the Thavorn Hotel also had Phuket's first elevator. Most of the old buildings in Phuket are only 2 floors, whereas this hotel has 5. Of course I had to take a ride in the elevator, though I don't think it's the original! Inside I saw a common sign - "No Durian" - the durian is a popular fruit but has a very strong smell, and is often banned from hotels, as the smell will linger. 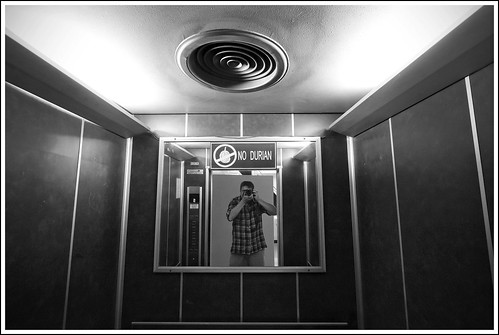 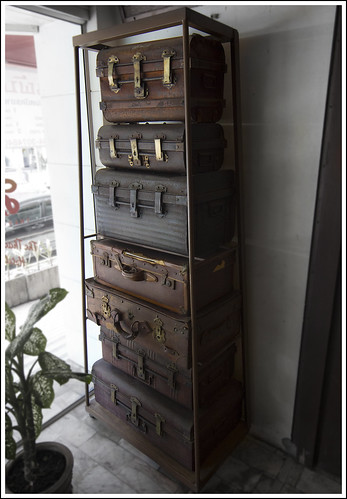 And here's an old luggage trolley complete with old leather suitcases, ready for a ride up to the 5th floor. There are odd little decorations all over the ground floor. It may not be the best hotel these days, but I do recommend people to stay a couple of nights in town, to get an idea of the other side of Phuket that existed before the tourism. By comparison - the Thavorn opened in 1961, a good 10 - 15 years before any major tourism hit Phuket and Club Med, which was the first really big mainstream tourist hotel, opened in 1985. There are plenty of newer places to stay in town - see my list of recommended Phuket Town hotels, or look at Agoda for more options. 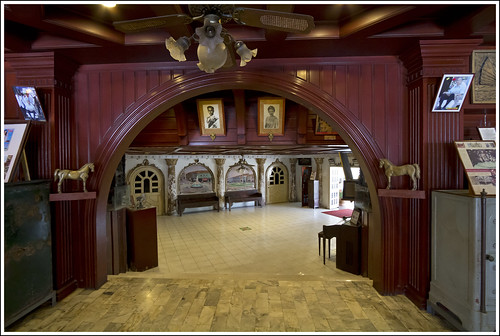 And I've not mentioned the Thavorn "museum" yet! Well, given that the whole place is a museum, I'm surprised they have a special room that they call a museum. Looks like it was formerly the dining room, and you can enter if you pay a 30 Baht entry fee. So I did, and a lady turned on a few very dim lights. Almost too dim for photos, I'll have to go again with a tripod. The museum is a collection of old junk and photos, all mixed up in one room. Now, I happen to like places like this, as you're never sure what you'll find. I'll add in a couple more photos later. The largest object in the room was this enormous old movie projector. 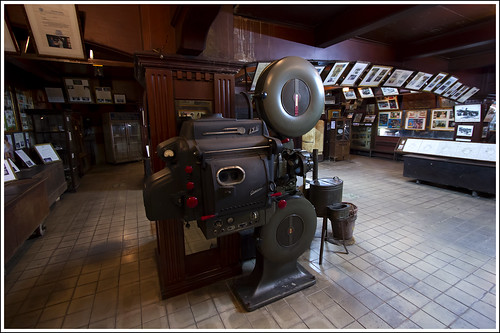 And there were a couple more projectors gathering dust in a corner. A rusty sword was on display with a notice claiming that the sword belonged to one of the two Heroines of Phuket. Certainly looked old and rusty. There were many signed photos of (I guess) Thai celebrities who (I suppose) had stayed at the Thavorn way back when it was fashionable. Another wall had a collection of royal photos documenting a tour of Europe over 50 years ago. Here a young royal couple meet another young royal couple .... 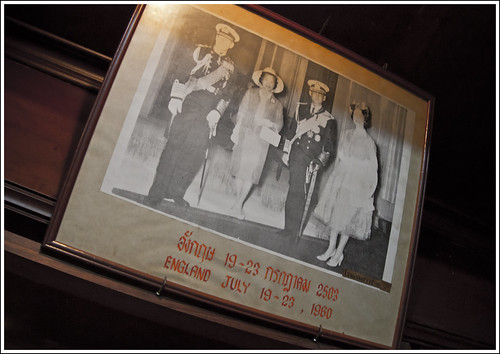 It's a room full of all kind of photos, old toys, musical instruments and it's only 30 Baht, so why not have a look! Phuket Town is full of little oddities and so I keep going back to find more...


You have been reading : The Old Thavorn Hotel in Phuket Town