Phuket is our home and that's not likely to change, but my wife and I do like other parts of Southern Thailand too. Phang Nga has some great scenery which we like to explore, and we love to go and relax at Khao Sok in the hills. But when there is time we head over to the east coast of Thailand, in particular to Chumphon and Prachuap Khiri Khan. From our house it's just under 400km to Chumphon, driving via Phang Nga and Surat Thani. Normally takes about 5 hours drive at a sensible speed. A bit longer if we drive via Ranong. 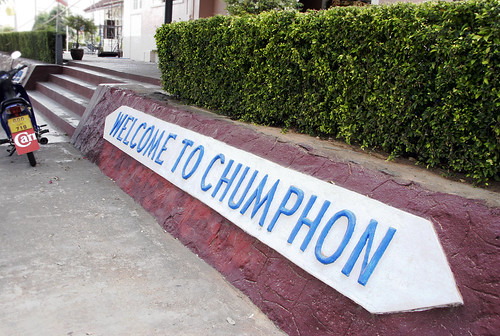 We've been this way many times. I first went there back in 2001. My wife first saw Chumphon in 1976 on the day she was born - yes, Chumphon (ชุมพร) is her home town. Our daughter was born in Chumphon too - we were living in Phuket at the time but my wife wanted the family around. At that time, 9 years ago, the family lived near the center of town, a short walk from the railway station in a house by the river. When my wife was young they used to swim in the river and the town was less built up. By the time I first went, a small road near the house was being used as a shortcut from town to the main highway.. add in some trains and occasional longtail boats on the river, and I recall some nights staying there with not much sleep! 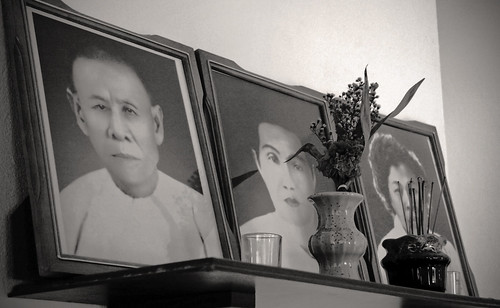 This post is not meant to be an autobiography, but .. a few lines about my in-laws. Meeting the in-laws is a strange experience at any time. Will they like me? My wife was a little worried about them meeting me. The family is quite traditional. Her dad was a police officer. When I first saw him, he was in uniform... but we broke the ice by drinking a few beers and singing karaoke (I seem to recall CCR and The Scorpions). Later my wife told me he never normally drinks. That was his way of welcoming me, since I drink like a fish! That is the only time I have ever seen him tipsy. I saw him have one glass of beer one other time at a birthday party. I was glad to be welcome. The family is great. The photo above shows old family portraits - that's my father in-law's grandfather and grandmother and his mother.

And here are the in-laws! My wifes Mum and Dad are great, very kind people. 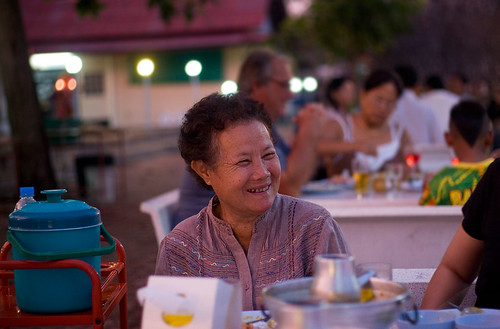 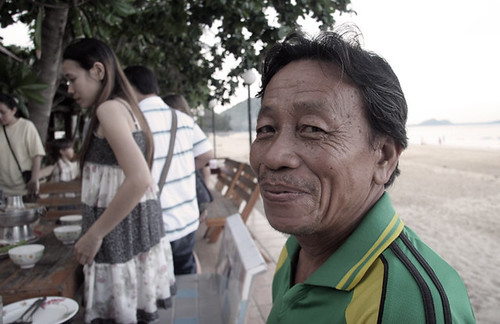 Both photos above taken while eating out by the beach. Chumphon town is not on the beach. There is another town nearby called Pak Nam Chumphon which is the fishing port, and there are 2 nice beaches not too far away. About 15km North West is "Cabana Beach", real name Thung Wua Laen Beach, probably the nicer one, has some accommodation, has quite a lot of restaurants and the last 2 times we have visited, we have been to play pool at a very funky little bar run by Pak and Pippa, a Thai/English couple. Pak speaks English like a Cockney. The bar is called "Funky's Beach Bar". And it's for places like this that I like Chumphon - a good break from the far more developed world of Phuket. I am sure Phuket had funky little thatch-roof beach bars 25 years ago. Chumphon has it now. Get it while it's hot. I'll have to take a photo of the place next time! 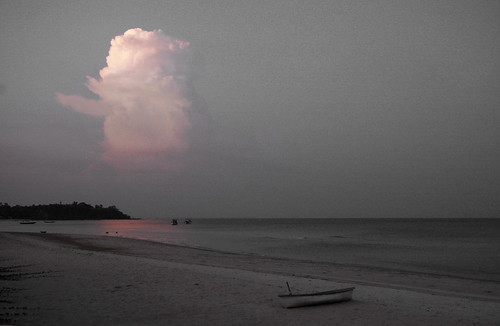 The other beach is Sairee Beach, about 20km South East of Town, just south of Pak Nam Chumphon. Sairee is nice too, quite scenic with some small islands offshore, and we spent quite a bit of time here last visit. My wife's sister got married recently and her husband's family has a house here on the beach. Well, I say house, more like a small mansion! Only just completed and not fully furnished yet, but damn nice! There are restaurants here too. The water in the Gulf of Thailand and on the east coast beaches does tend to be a bit less idyllic and blue compared to the west coast, but I can see the area developing over the next 20 years. Chumphon has a small airport, it's on the main road and train line from Bangkok too. The town has developed over the last 10 years. For the better? Is a Tesco Lotus store and a Carrefour a good thing? 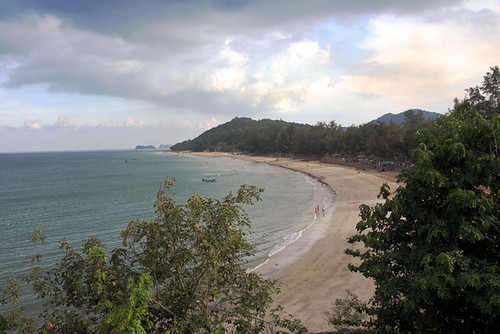 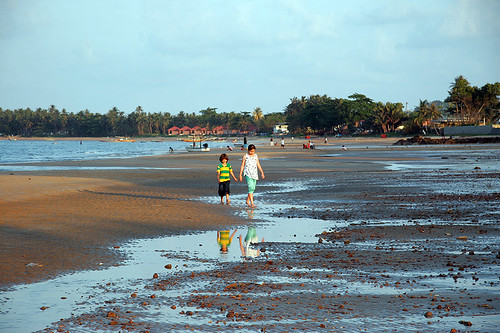 Also at Sairee Beach is a place of pilgrimage - the shrine to the "Prince of Chumphon", real name Prince Abhakara Kiartivongse, whose father was King Chulalongkorn (Rama V). The prince studied naval warfare in England and is known as the "Father of the Royal Thai Navy". Many people come here to say a prayer. The shrine overlooks Sairee Beach and below the shrine is an old Thai Navy boat which can be climbed all over, much to the enjoyment of our kids. 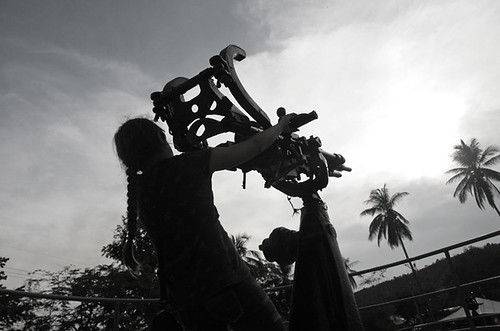 (above) Our daughter on the deck guns of the boat at Sairee beach. And below - my dear wife's eye looking through a gun emplacement on the boat. 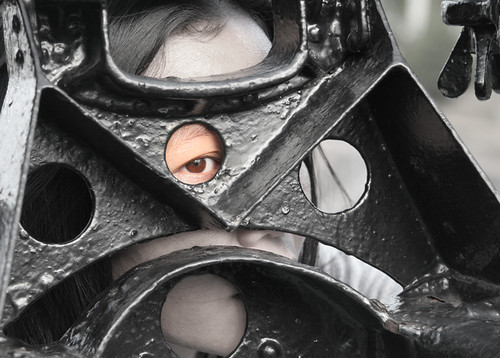 Chumphon has one thing that Phuket does not have - trains! You can get a train from Chumphon to Bangkok or even through to Malaysia. The station is small, close to the center of town and railway buffs will love it :) 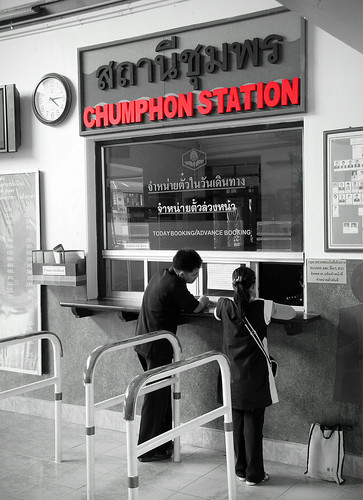 Outside the station on the road into town are some old locomotives. The photo below could have been taken in 1940. Or 2009. 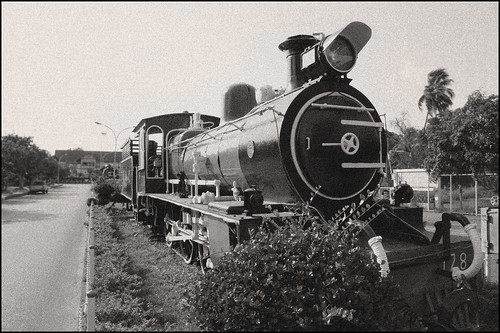 The family does not live in town any more. Dad retired from the police a few years ago, and they bought a new house in a new development just out of town. Very quiet but just 10 minutes drive into the center. Chumphon Town is quite a bit smaller than Phuket Town, and (so far) it's not a boom town. We have seen changes in the last few years with new houses and shopping centers, but Chumphon does not have a tourist industry. Chumphon is a lot more traditional and "olde worlde" compared to Phuket, and the cost of living is certainly cheaper. We might end up living there some day. 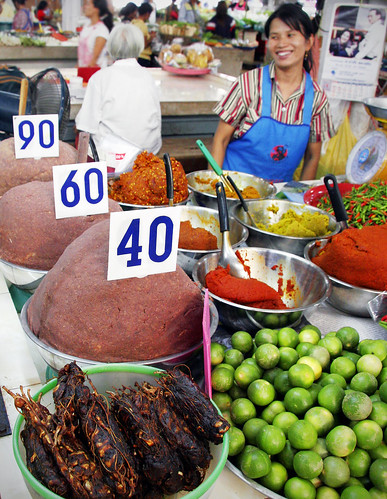 (above) in the main market in Chumphon town.

Mostly when we go to Chumphon we just hang around, chill out, we're there for some family time. We have been a bit further North to Prachuap Khiri Khan a few times - my wife has family there too. Also a very nice area. And it's less than 2 hours drive to Ranong - we visited some hot springs there this year. The road between Chumphon and Ranong has some great views. The best is surely the one below - a hill called Khao Fa Chi. Wow. 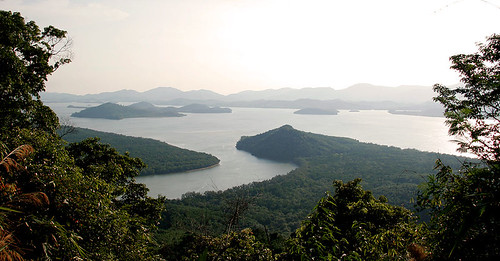 Around Chumphon, we like to explore - just as we do in Phuket, take some back roads and see what we find! There are also some more obvious things to see. 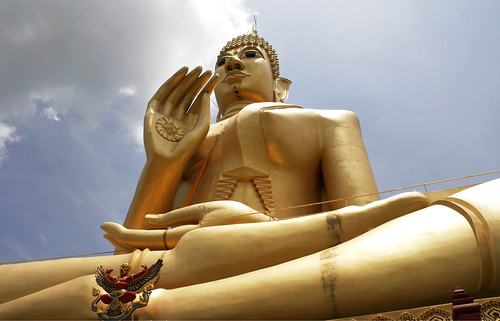 This Big Buddha is right by the main highway about 15km south of Chumphon. It's just on a slight hill, enough to look across to the ocean to the east. Nice place to stop.

One time, we took a longer drive, about 50km south, then another 50km west to a place called Phato, up in the hills where the Langsuan river winds it's way from source towards the Gulf of Thailand. My wife's sister's husband arranged it, I had no idea what to expect - a great day out rafting on the river! 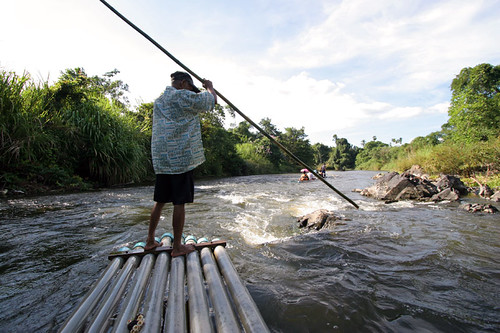 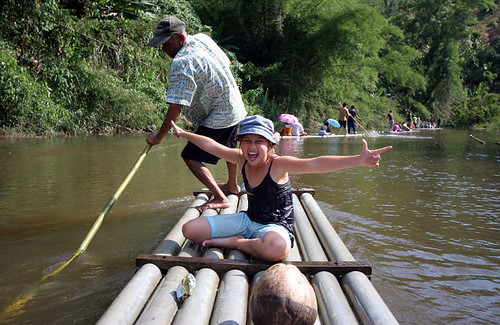 And sometimes we just stay home. The new house has something that looks like a canal next to it, though its actually a very long, thin pond. And it does have some fish. Below - our son fishing with my wife's sister's boyfriend (she has 2 sisters). 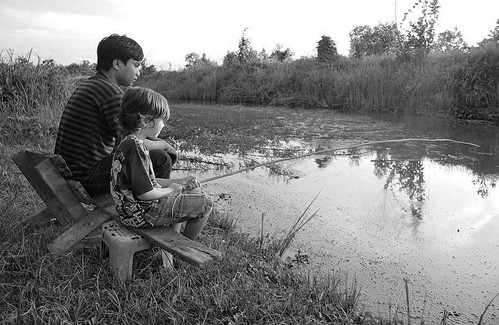 I went to Chumphon for Songkran this year, first time I had been there for this festival. It was very nice to be part of the family at this time of year. Songkran is well known for all the water throwing and partying, but there is also the traditional Songkran, and the ceremony called "Rod Nam Dam Hua" - see photo below - is very important, where the younger generation wash the hands of their elders. 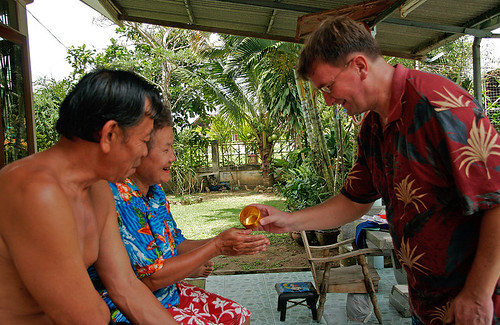 UPDATE 2013 ... Last year we did quite a bit of exploring around Chumphon, it deserves it's own blog soon! One interesting place we found, and my wife had never been before, nor had any of the family, was Koh Pitak, a small island just offshore, around 60km south of Chumphon town near Pak Nam Langsuan. They do homestays there, though we arrived on a quiet day and there was only 1 small restaurant to get some food, and the classic local shop called 7 Elephant ... get it? 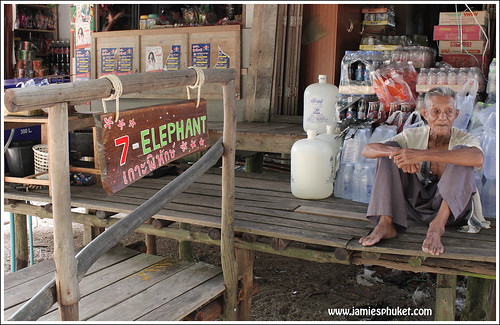 My wife's sister and her husband now have a house by the beach, near Pak Nam Chumphon, not far from Sairee Beach. If tourism ever takes off, it might attract early risers .. I do like sunsets, but the quiet beaches of Chumphon just after sunrise are great too. This is the view from what we now call "the beach house" :) 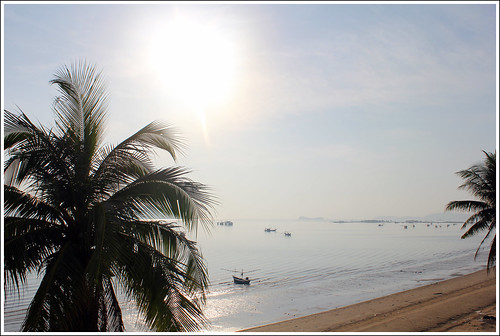 And last visit we drove North to visit a temple called Wat Kaew Prasert, near a fishing village called Bang Boed, not far south of Bang Sapan which is in Prachuap Khiri Khan, the next province to the north. A great view from the temple ...

Much of the coastline in the area is undeveloped, very beautiful, and with minimal facilities for tourism. This might change in the next 10 years, we'll see. Another beautiful place we found about 40km north of Chumphon was Thungsang Bay ... 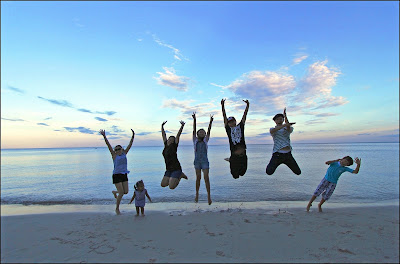 (above) Family members jumping .. we enjoyed an evening BBQ at Ao Thungsang Bay and will go there again!

Chumphon (or Chumpon, or Chumporn however you wanna spell it) is like my second home in Thailand. I still have a photo in my wallet - my wife and I on Thung Wua Laen Beach, a long time ago on my first visit to Chumphon before we had a family of our own. We love Phuket, but we're also very fond of Chumphon! We did actually buy a house there, which is now for sale.

(above) Our house in Chumphon - FOR SALE - SEE HERE. More info on Chumphon:

You have been reading : Chumphon Town and Province