It may be clear from the blog that I like temples. Thankfully my wife does too, and the kids don't mind a bit of exploration and a temple now and then .. so long as it's an interesting temple with something different about it. I had seen photos online of Wat Bang Riang in Phang Nga province, and it certainly looked interesting. We'd meant to visit for ages, but ran out of time on our last trip exploring Phang Nga which is the province of Thailand just north of Phuket. Simply cross over the Sarasin Bridge and you're in Phang Nga which has a lot of beautiful places easily within reach of a day trip from Phuket.

Wat Bang Riang turned out to be further than I thought. I did not check a map before leaving home and had the idea that it was to be found in the hills just North of Phang Nga town. I remembered seeing a sign pointing to Wat Bang Riang before when we visited Sanang Manora Forest Park which is just a few km from the town. So, surely the temple would be close. We'd never taken this road before. North of Phang Nga town there are big hills, and the road wound up and up. No sign of the temple. The road was narrow and very quiet and I had neglected to fill up with gasoline. Where's the damn temple? After about 30km we saw signs to Thap Put, a small town at a road junction. You can reach Thap Put by another road from Phang Nga, a busier road. We figured maybe we'd missed Wat Bang Riang somehow. Filled up with gas at Thap Put and asked for directions. Wat Bang Riang is another 10km further on from Thap Put, so over 40km from Phang Nga! There's a map at the bottom of this page.

Found it eventually, after 10km on a small country road from Thap Put, and correctly assumed that even on a weekend it would not be very busy since it's miles from anywhere and hard to find! And very worthwhile visiting! We parked at the bottom of a slight hill leading up to the main temple building. Monks were busy cleaning. 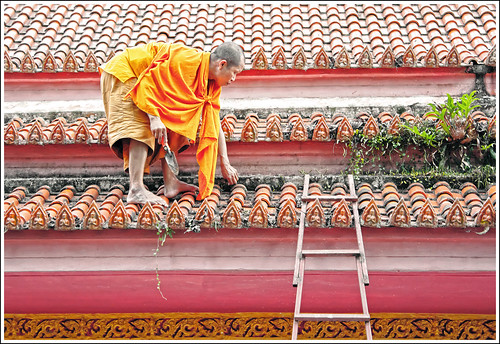 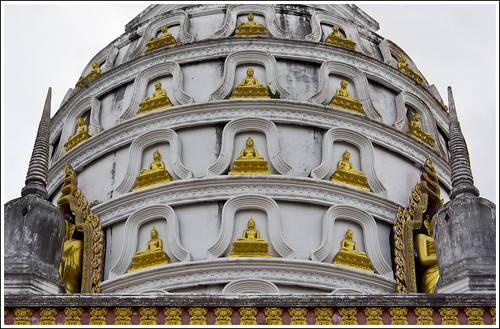 Next to the temple is a wide open area from where you have views over the rest of the temple grounds, across some hills to a couple of impressive statues. The standing lady below is Guan Yin, who is the goddess of compassion (in Thai they call her Kuan Im). 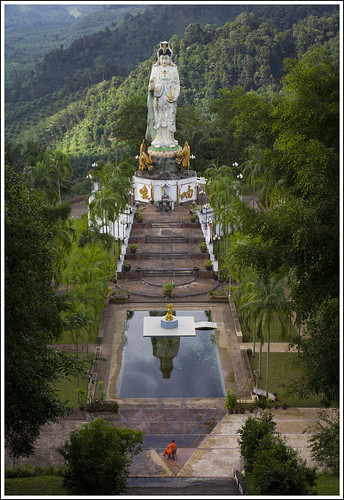 And a little further away, a large golden seated Buddha statue looking over the hills. A wonderful sight. Phang Nga is very rural, there are no big towns, but lots of green hills. Phuket has plenty of greenery too, but driving into Phang Nga does take you to a much quieter place. 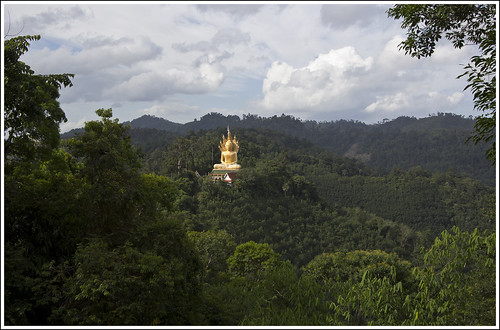 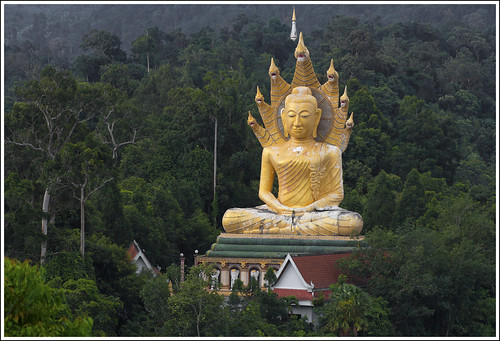 These views alone make the trip worth the effort. I was busy taking pictures as the rest of the family headed down a steep staircase down to the Kuan Im statue. Another Monk was on cleaning duty at the foot of the steps and my wife was saying her prayers to the goddess. 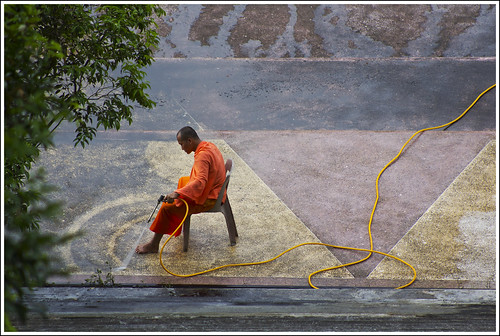 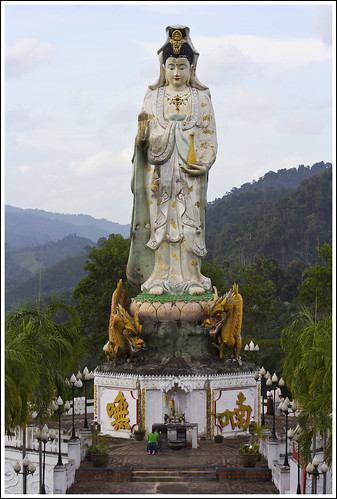 There's quite a lot of walking here! And plenty of stairs. Although we noticed that you can drive around from where we parked on a small road to reach Guan Yin / Kuan Im. I had a happy moment here when our daughter (hard to impress nearly-teen) let out a "Wow". Impressed by the statue and the sweeping views. 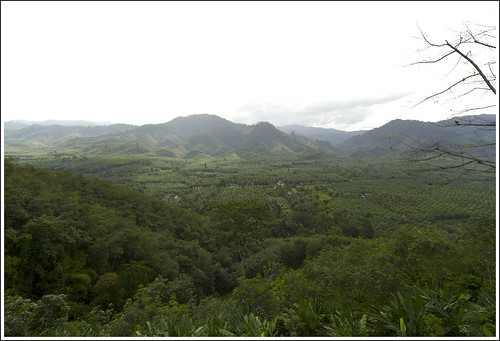 From the big Guan Yin statue, there was another few hundred meters to walk, mostly uphill, to reach the Big Buddha statue. 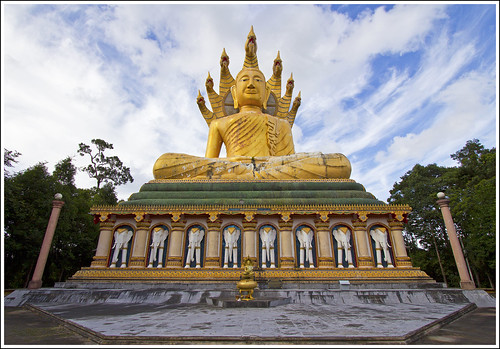 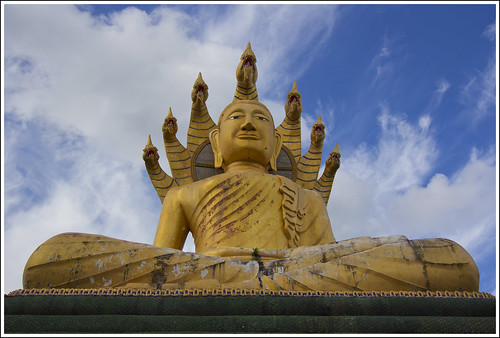 Despite being a Saturday afternoon, we saw only a few other visitors, small family groups mostly. Now we know exactly where to go, I think we'll visit again. We normally drive to Chumphon (my wife's home town) via Phang Nga and Thap Put, so Wat Bang Riang is almost on the route. From Phuket, depending where you start in Phuket, it's about a 2 hour drive.

A couple of details of the Big Buddha ... 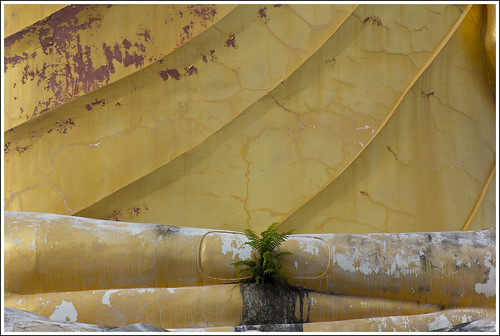 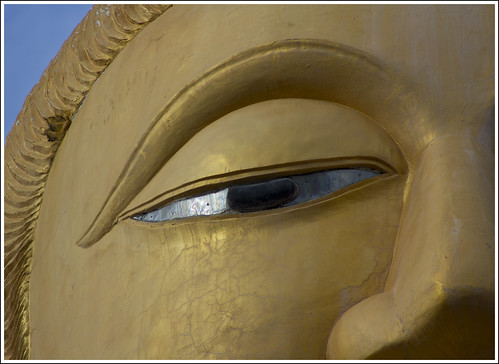 We'd started the day quite late, thinking Wat Bang Riang to be closer! I had wanted to also stop at a couple of other places in Phang Nga, but this will have to wait for our next day out "over the bridge". Exploring Phuket does not need to be limited to the island, there's a lot to see in neighboring provinces and we've been doing Phang Nga trips quite a lot recently. Always more to find!


You have been reading : Wat Bang Riang