Phuket is an island, surrounded by water, true. Yes, we should say "Koh Phuket" and many holiday brochures and websites will make a lot of this "island" idea. An island is exotic, romantic, a place where magic happens, palm trees sway and smiling people serve you cocktails made of coconuts. Yes, Phuket is really an island, but only just. It's less than 500 meters from the very north of Phuket across to Phang Nga province. We're not really cut off by the sea here! Well, not at all. If you ignore the international airport, Phuket is connected to the mainland of Thailand by a bridge. Or 2. Well, actually there are 3 bridges now. The first was built in 1967 and called Sarasin Bridge (สะพานสารสิน / Sapan Sarasin), named after a now-forgotten politician. Before that, there was the ferry .. photo below (showing an old photo on the wall of the Kopitiam cafe in Phuket Town) shows the ferry and no bridge! 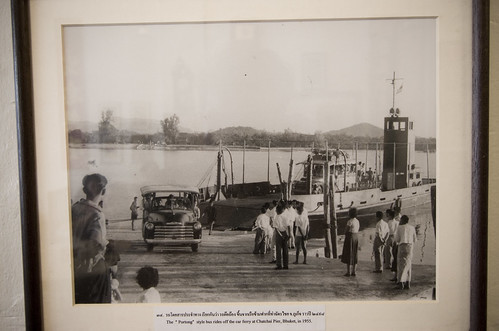 The first bridge was enough for 1970's traffic with little tourism yet hitting Phuket. A second bridge was built not so long ago (I can't recall exactly when, but it was in the last 12 years) to allow traffic to pass more easily in and out of Phuket with one bridge heading north and one to the south. And now... just a couple of months ago, a 3rd bridge was completed. The old bridge has been tarted up and turned into a pedestrian bridge with lot of lamps and steps and decorations. We took a walk over Sarasin bridge recently on a sunny low season day, planning to walk and then eat lunch at the Thanoon Seafood restaurant which sits by the water just 50 meters from the bridge on the Phang Nga side. 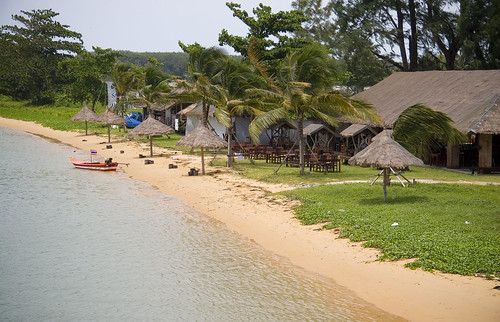 (above) Thanoon Seafood restaurant seen from the north end of Sarasin bridge.

Best place to park if you want to walk.. close to the restaurant.. you have to drive over the new bridge, do a U-turn and turn off on a side road, back under the road bridge... The idea of the pedestrian bridge is to make a nice tourist attraction. The bridge certainly looks nice and is a good chance to walk to Phuket from Phang Nga, or walk to Phang Nga from Phuket with a pretty seaview.. but really? A tourist attraction? You going to take a taxi here 50km from Patong to walk over the bridge? Probably not, but if you are a more independent traveler, rent a car, take a trip to the north of Phuket or to Phang Nga.. then do stop and take some exercise here. 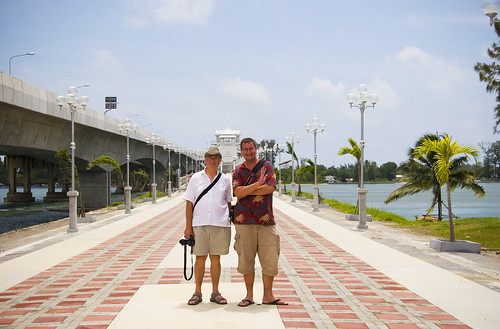 (above) That's me and Dad ready for a little walk. Got some good fresh sea air that day too! It was still low season with a strong breeze blowing in from the west. At the Phang Nga side (north side) of the bridge, to the east in the sheltered waters there is a fishing village. Longtail boats come and go. There were some larger fishing boats at the dockside too. 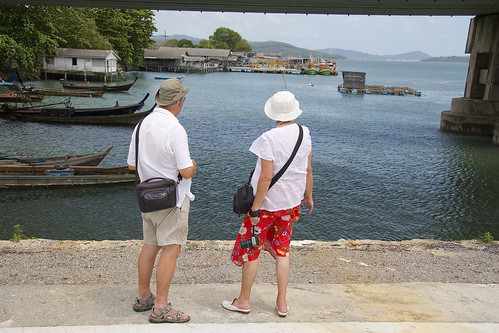 (above) Mum and Dad check out the view to the east on the Phang Nga side of the Sarasin bridge. 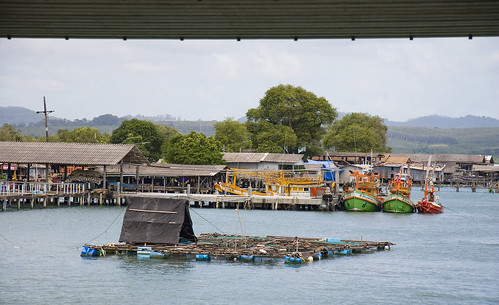 In Phuket, you don't have to drive far to find the "old Phuket" away from the hotels and tourism. The little fishing village above is a world away from Patong Beach, and I know where I'd rather live. We walked along Sarasin bridge back towards Phuket, stopping to pose for some pictures on the way. It was a nice sunny day, no rush at all. In the centre of the bridge, you have a little view tower with steps up and down to the bridge. Good place to pose. Halfway up the stairs is the stair where I sit. 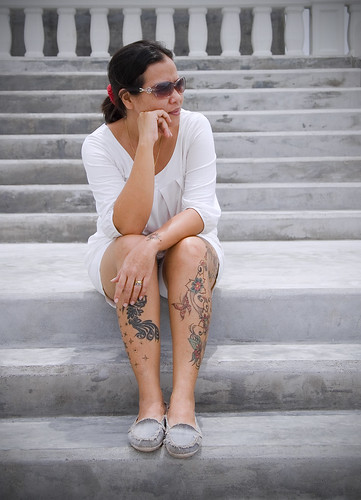 Actually, I admit, my wife and I stopped halfway. The kids chased after their Grandma who wanted to complete the long walk back to Phuket. As an aside.. we don't actually use the word Grandma... our kids call my Mum "Nanny", which is what I used to call my paternal grandmother. So, they chased after Nanny and she found something interesting to point out in the water... 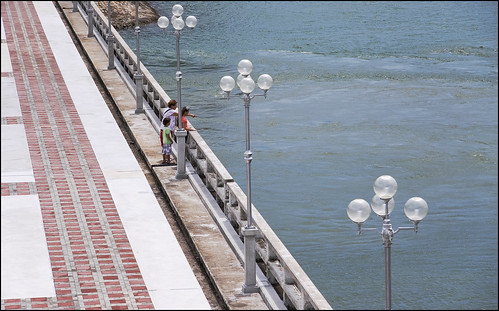 They all reached terra firma on the Phuket side safely and headed back to the lazy portion of the family (that's me, my dear wife and my Dad). We cross the bridge quite often for days out. We like heading to Phang Nga to visit Phang Nga Bay or to eat at the Samchong Seafood restaurant or the 360 Degree Cafe. And on this day we ate lunch at the aforementioned Thanoon Seafood. I reckon we'll take a stroll over the Sarasin Bridge again sometime soon. I'd like to explore the area a bit more when there's time. 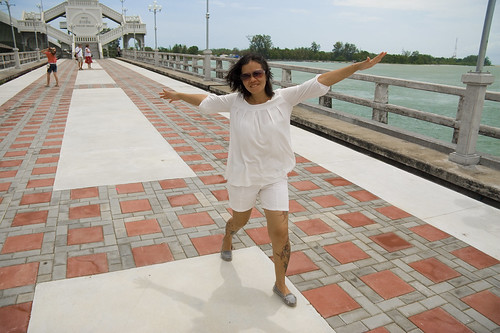 (above) Yes we enjoyed our little walk over the bridge! Many times I had driven over the old bridge and wished to stop and take a walk - not possible without blocking traffic! Now that walk is possible. To the west - the open ocean, to the east is Phang Nga Bay. I have always enjoyed the view from Sarasin Bridge, it was nice to be able to get that view and take a leisurely stroll at the same time. Followed by a nice lunch at Thanoon Seafood - and here's a view from under the bridge(s) just along the sand from the restaurant ... 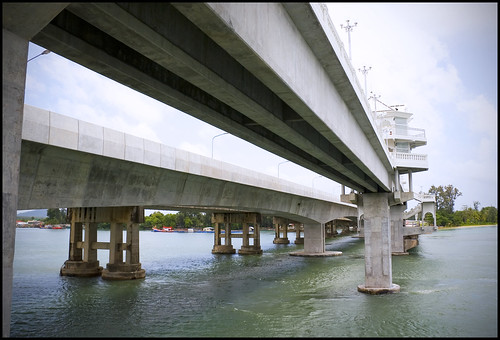 
You have been reading : Sarasin Bridge between Phuket and Phang Nga