On Sunday October 2nd, I was in Phuket Town nice and early (about 7:30am) with Mum and Dad for 2 reasons... Of course, the vegetarian festival was on from 26th September - 6th October, and on the morning of the 2nd was one of the big street processions from the Bang Neow shrine in Phuket Town - I was in town last year for the procession from this shrine and got lots of good photos - see Bang Neow Shrine Vegetarian Procession 2010. Also, October 2nd was the date of the Worldwide Photo Walk, something which I have done in 2010 and 2009. Groups of photographers all over the world take a walk in their home towns all on the same day - more info at the Worldwide Photo Walk website.

The Phuket Vegetarian Festival is (I think) somewhat misunderstood. The images that come out of the festival are normally those of pierced faces. And for sure that's what I have concentrated on for the last couple of years. The blood and the shock value is certainly a real part of the festival and the last post on this blog from Sam Kong shrine shows a lot of the piercings. This year I have already tried to show more of the festival - the opening pole raising ceremony and an evening procession in Kathu village have been blogged with hardly any blood in sight! And for this photowalk day I also decided to try and look more at the tradition and the respect shown by the local people to those in the processions. In other words, more photos of the people watching rather than the pierced faces. 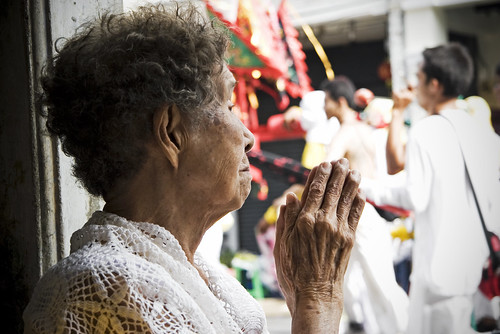 This lady was sitting outside her house on Thalang road in the old town. I spotted her from across the road and a Thai photographer was already hard at work on her.. so I joined in. Sometimes older folks don't really like being photographed, but she was very gracious and did not mind a couple of lenses in her face as the procession passed. She will have seen a lot of changes in Phuket. There won't have been too many foreigners about when she was a kid, but I felt from her that the vegetarian festival means something very real. This is not a sideshow or event for tourism.

Not all of the Ma Song have pierced faces. The guy below was half walking, half running along the street waving his flag to scare off evil spirits and stopping at some of the small shrines set up outside houses and shops. He took a drink at this shrine. Sometimes the Ma Song will take a piece of fruit from a shrine which will be given to people along the procession route or placed on another household shrine. One of the Ma Song handed me a whole bunch of bananas! Having no place to put them I left them at the house I was standing next to. 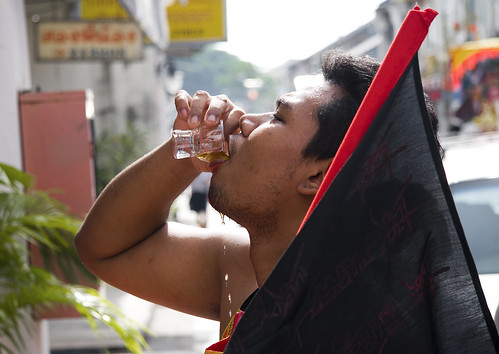 Having woken early with no breakfast and after a while walking in the hot early morning sun, I was ready for breakfast. On Thalang road there are quite a few small restaurants, and a favourite of mine is the Kopitiam restaurant where they always have good food, and during the vegetarian festival were doing some very tasty dishes. We ate in there several times during the festival week! Around 8am I ordered Hokkien Mee - a very local style noodle dish. 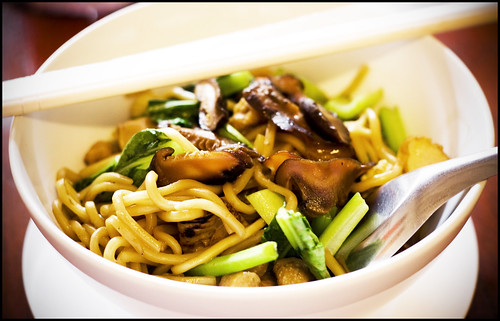 The Kopitiam restaurant is a family run place. The same family owns the herbal medicine shop next door and the Wilai restaurant next door to that! Very nice people, there are several generations of family living here, which is the typical Thai way. The old folks are looked after by the young folks. There are always a few of the older generation around Kopitiam, some of whom are well into their 90's! 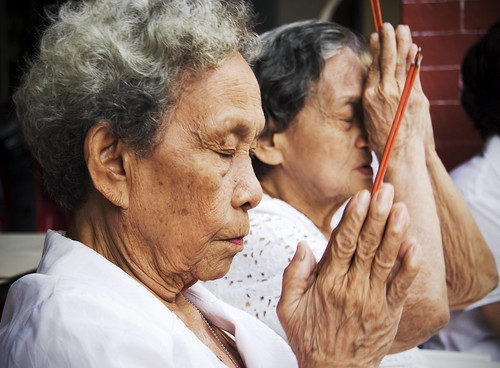 From my seat in the restaurant I had a ringside view of the Ma Song who stopped to bless Kopitiam and the family at their temporary shrine. 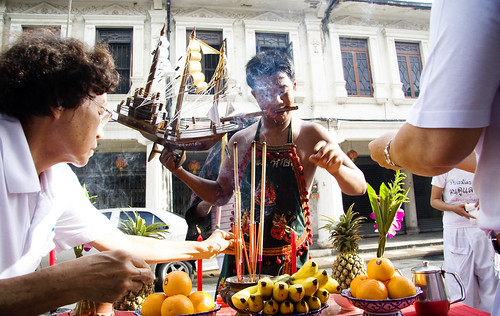 Hmmm, no bloody pierced faces yet? I'll be sure to put that right in the next blog post which will be about the Kathu Shrine procession which took place on 4th October. Meanwhile, here are a couple of characters from the 2nd October procession. Sometimes you don't know where to look in these processions, there is so much going on, and if you have never seen it before, it certainly is overwhelming. 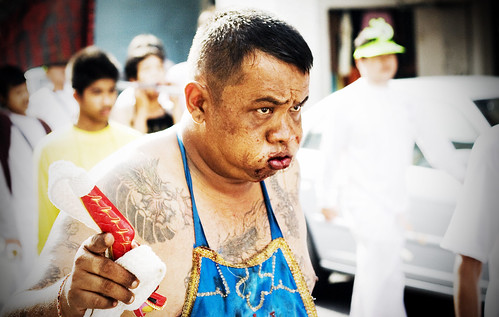 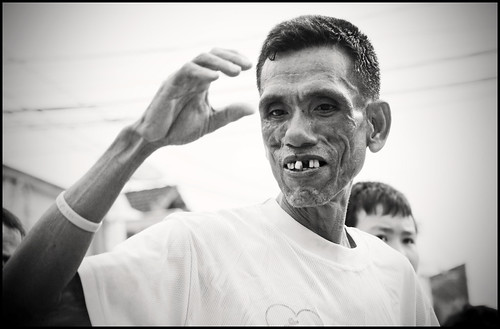 The noise, the firecrackers, the strange faces, the smoke from the incense, the white clothes, the rituals... not just overwhelming for first timers .. I tried to snap some pictures of kids watching from the sidelines who were maybe not 100% enjoying the morning :) But they are learning. They are learning about the festival from their families, learning the traditions and the history. The vegetarian festival is alive and well and is being handed down to the next generation. 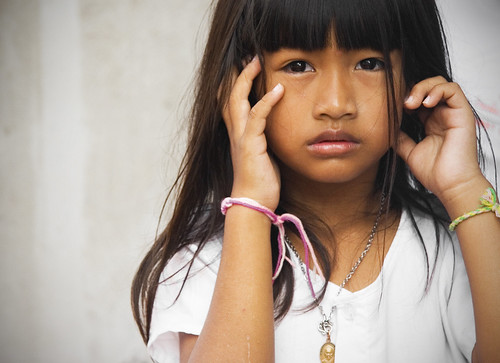 The photo above is the one I decided to upload as my "entry" to the Worldwide Photo Walk competition. Her face says a lot! I know that the vegetarian festival may not be everyone's cup of tea, but for me, this IS Phuket. Not the beaches and 5 star resorts and bars and nightlife and elephant rides and snorkeling, but this is the real old Phuket that can be hard to find.

The procession on October 2nd was all but over by about 9:30am, and I headed to the very nice Cafe 154, part of the Royal Phuket City Hotel, where all the photo walk participants were due to meet. A chance to compare pictures, compare cameras, catch up with friends and have some very nice coffee. You can see more photos from this years photowalk on 2nd October on Tim's Blog, on Diane's website, on my Mum's blog (!) and on the Flickr Group for Phuket photographers. After a drink or two, we posed for a photo ... 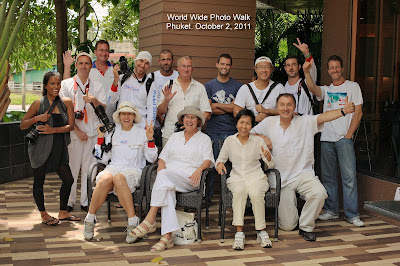 
You have been reading : Vegetarian Procession and World Photo Walk 2nd October